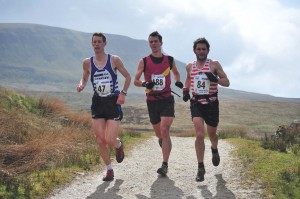 Hundreds of eager fell runners descended on the Yorkshire Dales last weekend to take part in the annual Yorkshire 3 Peaks fell race. Now in its 58th year, it is widely regarded as one of the most iconic and toughest events in the fell running calendar. The ‘classic route’ consists of 23.3 miles with a total climb of 5279 feet over Pen-Y-Ghent, Whernside and Ingleborough.

Recent wet weather conditions meant that the current record of 2hrs 46 mins by Bingley’s Andy Peace would never be threatened. However with the immense quality of the field it was always going to be a hugely competitive race.

In wet and windy conditions it was Scottish international Joe Symonds who eventually took the win for the first time in his already successful career. He clocked a very impressive time of 2hrs 55mins and managed to hold off the threat from the ever improving Carl Bell (Howgill Harriers) in 2nd place (2hrs 57mins) on his debut in the event. Dark Peak’s in-form Rob Baker took 3rd (2hrs 58mins) with Salomon sponsored athlete Ricky Lightfoot in 4th (3hrs).

The next man home was Calder Valley’s very own Karl Gray, who had extra cause for celebration as he rewrote the history books by setting a new course record for a Vet 40 athlete, finishing in a very impressive time of 3hrs 1min and 5th place overall. With the event also this year’s Yorkshire Championship event, Gray also took the Yorkshire silver medal behind Baker who earned gold and ahead of former race winner Rob Jebb (7th overall) who took bronze. A result which may well see Gray in contention for a well earned international vest after an excellent run of performances in this season’s championship events. In equally impressive form was Gray’s teammate James Logue, who was the second Vet 40 on the day after a stunning performance. The crack orienteer demonstrated his quality over the long distance by clocking a very impressive time of 3hrs 9mins and 11th overall. Next man home for the team was club captain Ben Mounsey in 26th place and disappointing time of 3hrs 25mins by his high standards. It was a below par performance for Mounsey who predictably suffered in the final few miles after a couple of months break from serious training. Nevertheless it was enough to see Calder Valley finish in second place overall in the Yorkshire team standings behind a dominant Dark Peak. Valley were also second team overall in the competition as the club’s final counter Tim Black impressed on his 3 Peaks debut clocking 3hrs 34mins and 41st place overall.

The ladies race was won by Sarah O’Neill of Hunter’s Bog Trotters in an exceptionally fast time of 3hrs 28mins. She cruised to victory over 15 minutes ahead of 2nd placed Emelie Fosberg of Team Salomon International (3hr 43mins) and Welsh international Sarah Ridgeway in 3rd (3hrs 45mins).

Helen Lambert was only one female competitor for Calder Valley finishing in 43rd position in the ladies race (4hrs 49mins).