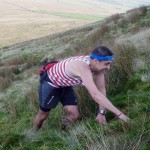 Calder Valley Fell Runners were out in force on Saturday at the Full Tour of Pendle Fell Race in Barley, Lancashire as the race was the final counter in the club’s annual championships. With a few categories still to be resolved, there were a number of runners in the hunt for silverware. The men’s club championship had already been won by Ben Mounsey, so attention turned to the ladies and it was Joanna Stevens who prevailed, claiming a well deserved first championship title. There was a double success in the Stevens household with Jo’s husband Jason winning the Vet 40s category, a title claimed by Linda Hayles in the lady vets. Mike Wardle ran out as Men’s V50 championship winner, but Rob Dobson who was poised to win the handicap championship could see Mark Wharton wrestle that trophy out of his hands if Mark ran well enough, final calculations still pending. Other prize winners confirmed on the day were Kevin Hoult and Anne Johnson, who picked up the ‘Long Race King and Queen’ trophies.

The Tour of Pendle is the last long fell race of the fell running calendar and has been run in horizontal hail and sleet in recent years, so runners were happy to only have to contend with the race’s seventeen miles and nearly 5000 feet of ups and downs in unseasonal sunshine. Detractors of this classic race complain that the race is ‘contrived’ as it criss-crosses Pendle summit and runners find themselves visiting parts of the course twice, but this has its advantages for spectators and supporters, like Helen Lambert and Hannah Dobson, who plied their club mates with water and jelly babies and plenty of encouragement. Also, on a day as good as Saturday, it’s a privilege to be able to see the hill from all angles, even if it doesn’t feel like it on the fourth climb up to the summit.  What is certain is that the race continues to be one of the biggest pulls of the racing calendar, with a record number of 380 competitors racing on Saturday.

Calder’s James Logue, who won the race last year, was tracked by the in-form Carl Bell of Howgill Harriers for much of the route, with the conditions too good for Logue to be able to find a covert line that Bell wasn’t able to follow. With the end in sight, Bell made the decisive move, with Logue finishing in a superb second place. Third was Andy Brown from host club Clayton-le-Moors, who is also becoming a regular podium finisher in local races. Jason Stevens enjoyed the day in the sun and ran in second Calder counter in tenth place. Calder’s Tim Black, Kevin Hoult and Steve Smithies all finished in the top fifty.

Like Carl Bell, Lindsey Brindle of Horwich is another runner who has really hit the heights this year and she posted one of the quickest tours ever run and finished a full fifteen minutes clear of Calder’s Anne Johnson, who was first veteran. Renee Saxton of Otley was third.

No results are currently available but they should be published at this link first: http://www.clayton-le-moors-harriers.co.uk/index.php?pageref=results 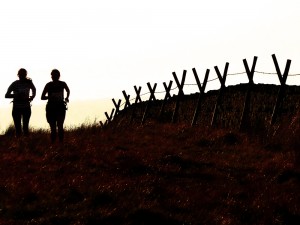