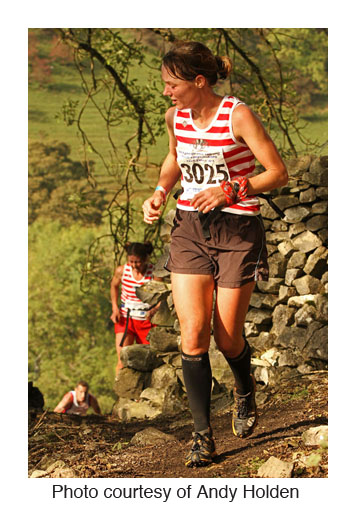 Calder Valley Fell Runners’ Jo Waites was in Kettlewell for her 40th birthday party and the former ladies club captain had double reason to celebrate as she was part of a Calder Valley ladies team that picked up a bronze medal in the national fell relays. The relays was the second event of the weekend to attract Calder Valley’s fellrunners to Kettlewell with 182 competing teams from all over Britain sending their best off-road runners to do battle. The event was organised by Bingley Harriers and it was fitting that their team collected a gold medal in the ladies competition. With three of the top ten mountain runners in Europe in their ranks they started out as strong favourites, but the quality of the Calder performance was demonstrated by the fact that Bingley only edged past Calder Valley on the final leg. First off for Calder was their new recruit Trudi Entwistle who got the ladies off to a solid start handing over to long distance veterans Anne Johnson and Sally Newman for the paired second leg. Then Waites and club mate Jo Buckley took the baton for the navigation leg, putting the ladies in a great position for Gayle Sugden on the glory leg to bring home a well deserved team bronze. In very wet underfoot conditions the appropriately named Edinburgh based club Hunters Bog Trotters were second ladies team.  In the men’ race there were also no surprises as Dark Peak were at full strength to take team gold. Backed up by some of the country’s fastest fell men and international orienteers they were five minutes ahead of perennial challengers Borrowdale Fell Runners. Last year’s winners Shettlestone Harriers had former world long distance mountain champion Jethro Lennox and new fell supremo Thomas Owens in their line up, but this year they had to settle for third. With Ben Mounsey missing, Calder Valley finished in a fantastic sixth place, with Tim Black on leg 1; Karl Gray and Shaun Godsman on leg 2; Gavin Mulholland and James Logue the star performers on leg 3 and Alex Whittem on leg 4. Borrowdale’s wily vets once again proved to be unstoppable in their category, claiming a gold medal once again. Calder Valley had another three teams in the events who all ran well at a superbly organised event on a bright sunny day for running on the Yorkshire fells. Jason Stevens