The weekend had weather aplenty which did limit some racing, with a number of events in the Lakes cancelled. But as most fell runners will tell you, their sport is all about running through ankle-deep if not knee-high bogs! And CVFR certainly made a muddy splash at two races this weekend.

Saturday, 30th October saw the 54th edition of the always expertly organised CraggRunner ‘Race you to the Summit’. This classic local 4.3-mile fell race, completed with over 800 punishing feet of climb, sees competitors start at the Summit Inn in Littleborough and run up to the White House pub near Blackstone Edge – where they touch the pub wall & turn around to run back to the Summit for a well-earnt pint!

A firm favourite with Calderdale clubs, organisers Craggrunner always ensures a friendly atmosphere & encourages those racing to run in fancy dress for Halloween. Moreover, with the event actually falling on the Halloween weekend this year, there was an extra push for people to get into the holiday spirit. Spectators got a real treat with many of the 133 racers turning up in full fancy dress – anyone wandering past may well have wondered if they had fallen into an alternate universe! 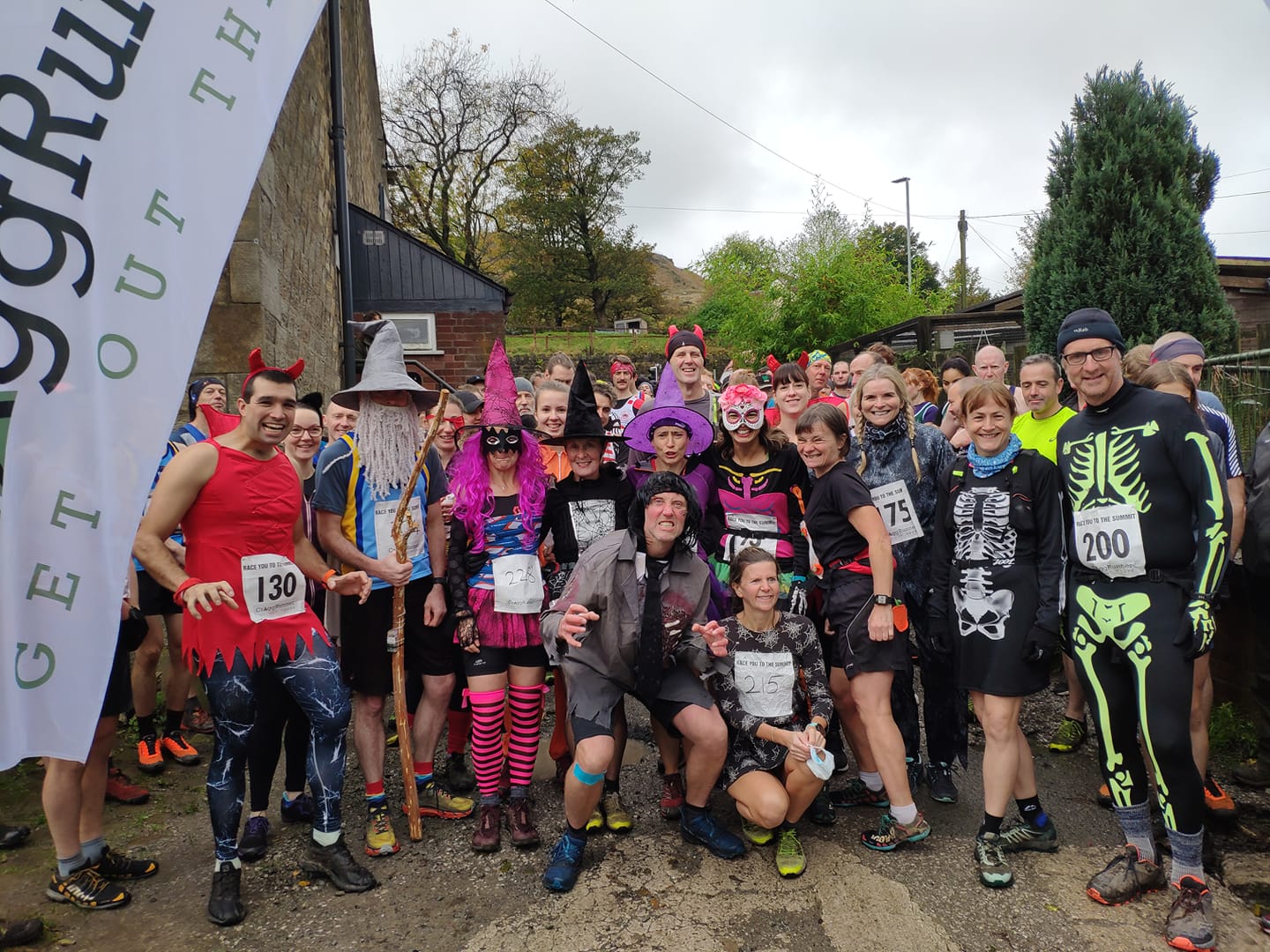 The start with fancy dress on display – photo courtesy of CraggRunner

An event in its 54th year in Autumn in Calderdale, has seen its fair share of adverse weather conditions & the average storm was not about to stop play. There was a great turnout from the club at both junior & senior level, with wins in both the men’s & the women’s race for CVFR. The junior races were held before the seniors, with U9, U11, U13 & U15 age categories (the over 15s joined the senior race). Whilst junior results were not yet published on going to press – the race organisers commended these younger runners, who gave it their all, despite definitely drawing the short-straw when it came to the weather!I 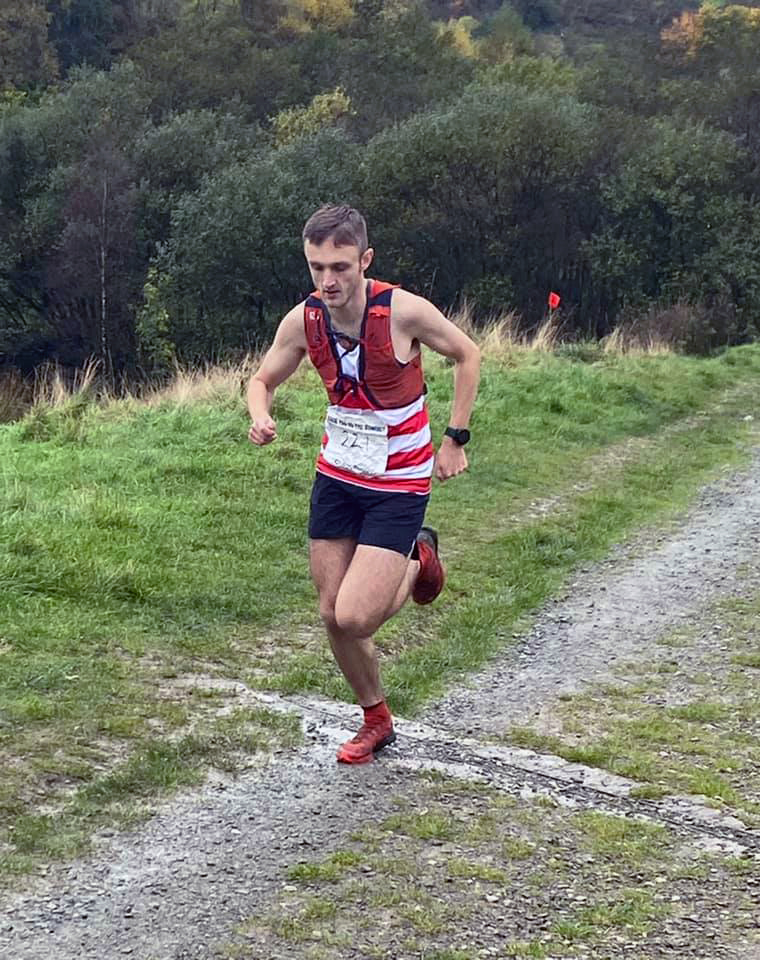 n the Senior race, CVFR’s Martin Howard describes how he came out ‘wanting a nice & easy’ run to retain his crown (& pumpkin) from the previous year (2019). But he readily admits this was ‘far from’ what he got! Instead, Howard found himself in third place on touching the pub wall at the top. Confident of his skills in descent, he held on in for the ‘out & out race’ back down – ‘all the way to the last 200m, where the many years of speed work at Mark Goldies’ Run training paid off’ – finding something left in the tank, he managed to pull free to cross the line first in 29 minutes 40 seconds – 7 seconds ahead of Todmorden Harriers’ Doni Clarke and not only a minute ahead of third place Halifax Harriers’ Alex Manchester but also a minute faster than Howard’s 2019 winning time. He was quick to praise Clarke & Manchester for their pushing him so hard & keeping it so interesting. 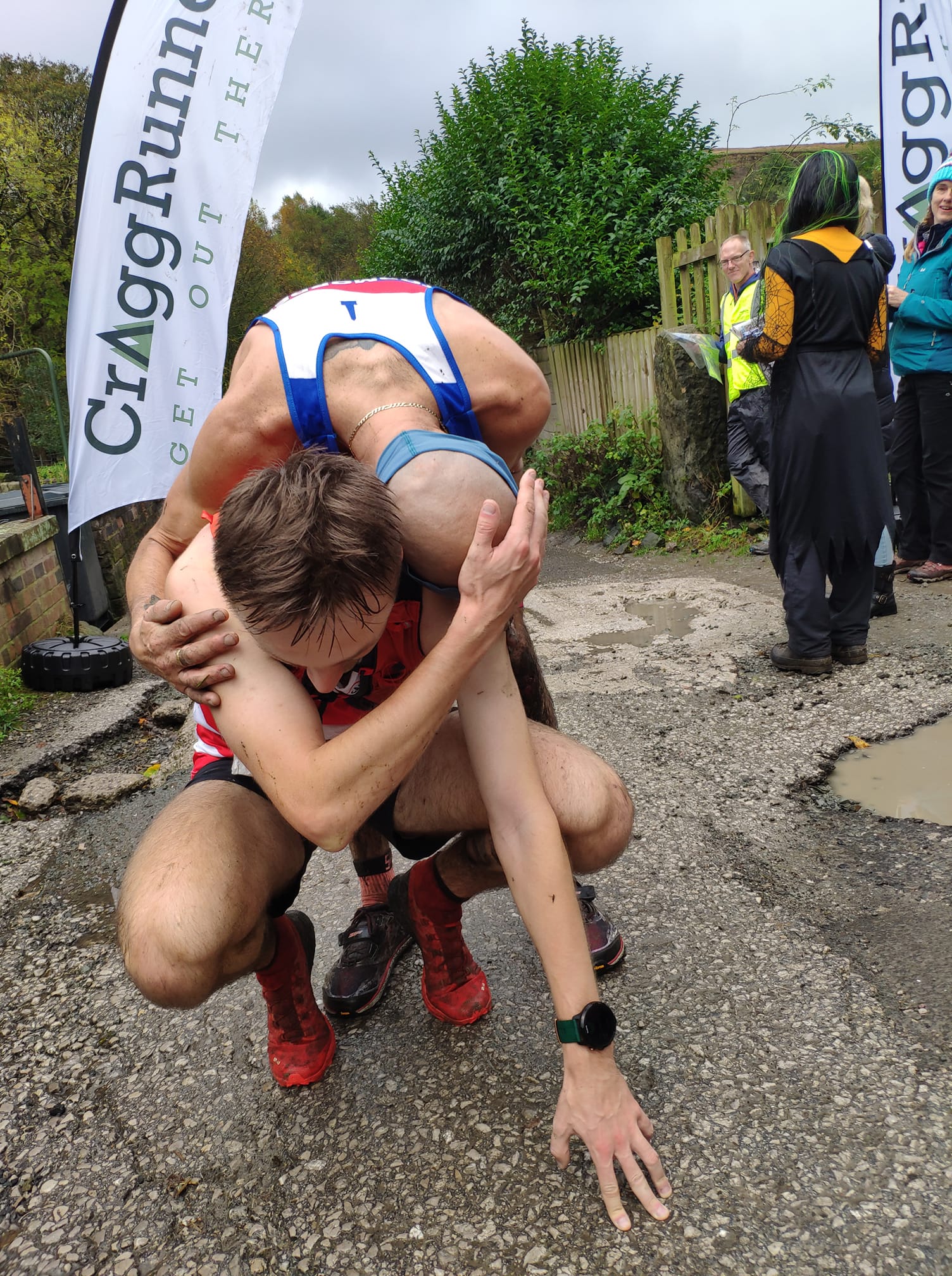 Finished at the finish – Martin and Doni – photo courtesy of CraggRunner

Running in full fancy dress did not hamper Calder Valley’ FR’s Ambi Swindells who stormed the women’s race, finishing in an astounding 39 minutes & 16 seconds. This feat saw Swindells cross the line over a minute ahead of second-placed female runner Funmi Morgan and more than two minutes in front of Maread Morony in third (both Leeds University runners). It was also first for veteran red & white hooped runner Linda Hayles in the FV65 category. 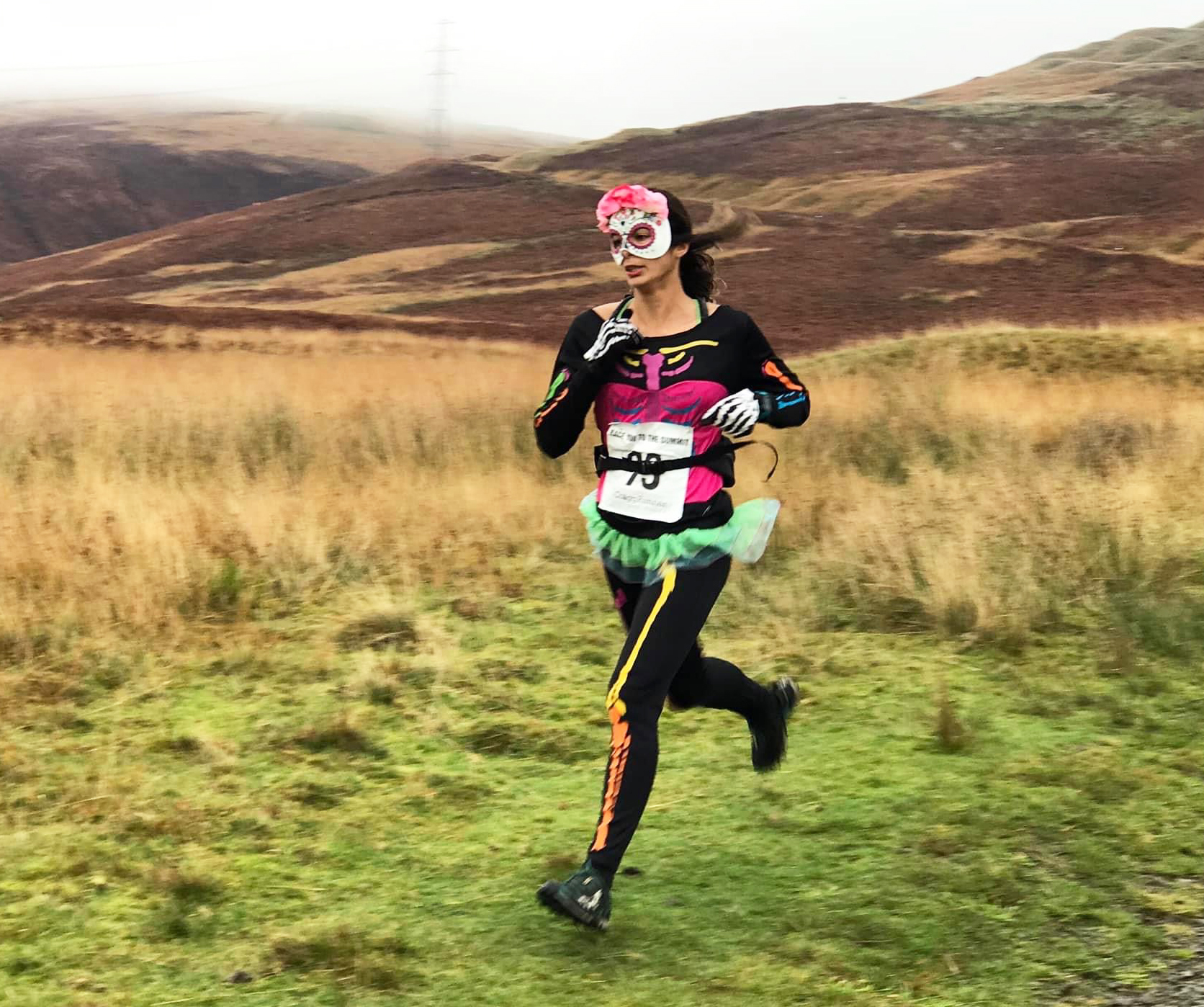 All of the CVFR runners were quick to praise CraggRunner for another friendly, well marshalled event & good fun event. For anyone new to the sport, the Race you to the Summit fell race is certainly one to get in the diary for next year!

Further afield, this Sunday marked the Bowley Blast Trail Race at the Great Harwood Showground in Lancashire – the first in a series of Sportsshoes Pinnacle Trail events. This 5.2-mile race (over a mile longer than planned, due to a farmer not granting access rights to his land) was coupled with a North Face VECTIV footwear test – a great success, with many racers opting to run in shoes they first tried on the day. 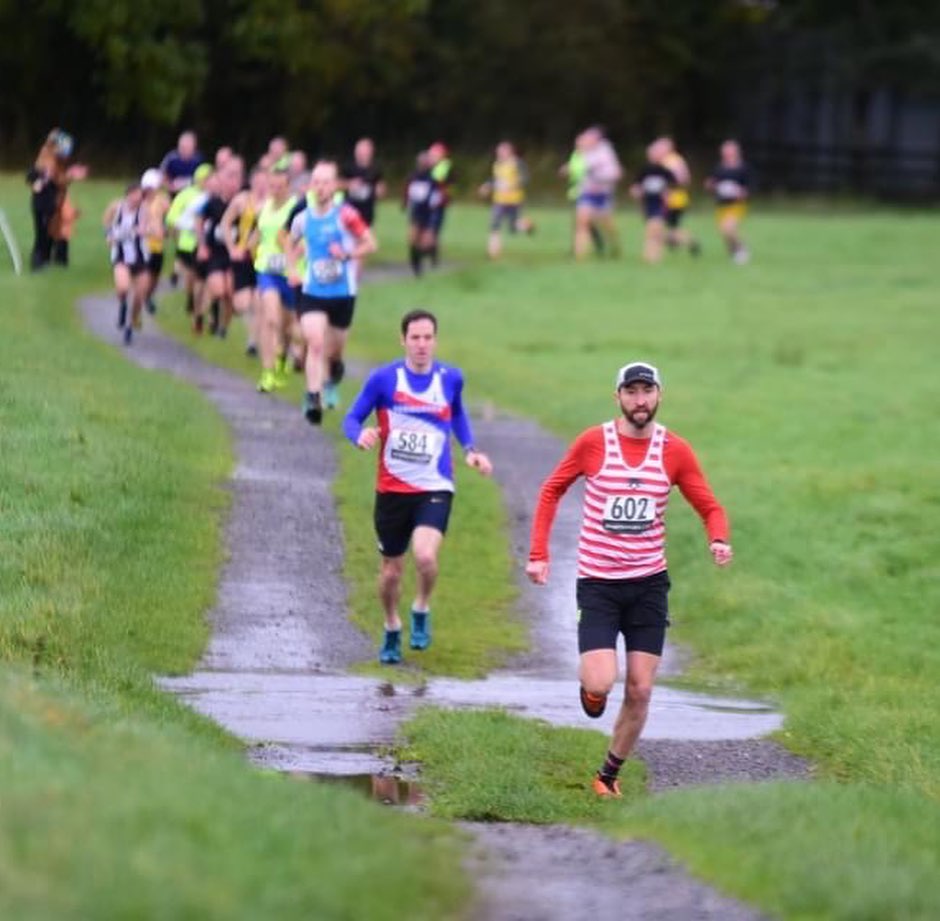 Sportsshoe athlete & Calder Valley FR , Ben Mounsey led the field of 140 runners from the off. Mounsey managed to follow his race plan, by building an early convincing lead & working the climbs. The weather was pretty appalling, with racers having to contend with mud & rain galore. But Mounsey dug on in to take the overall win (& first place in the Men’s V40 category) in 32 minutes & 30 seconds – just shy of a minute and a half ahead of both second-placed Aiden Holgate (Ribble Valley Tri Club) & third-placed Darren Shackleton of Todmorden Harriers.

Reflecting back on the event, Mounsey laughling recalls how it’s the first time he has found himself needing to open so many gates – at least 7 or 8. He felt like every time he got into a racing pace, he had to stop to open another! But joking aside, he was quick to commend a ‘great course, with a bit of everything, including plenty of technical & challenging sections’, plus highlight how much he had enjoyed taking part in this expertly organised trail run. 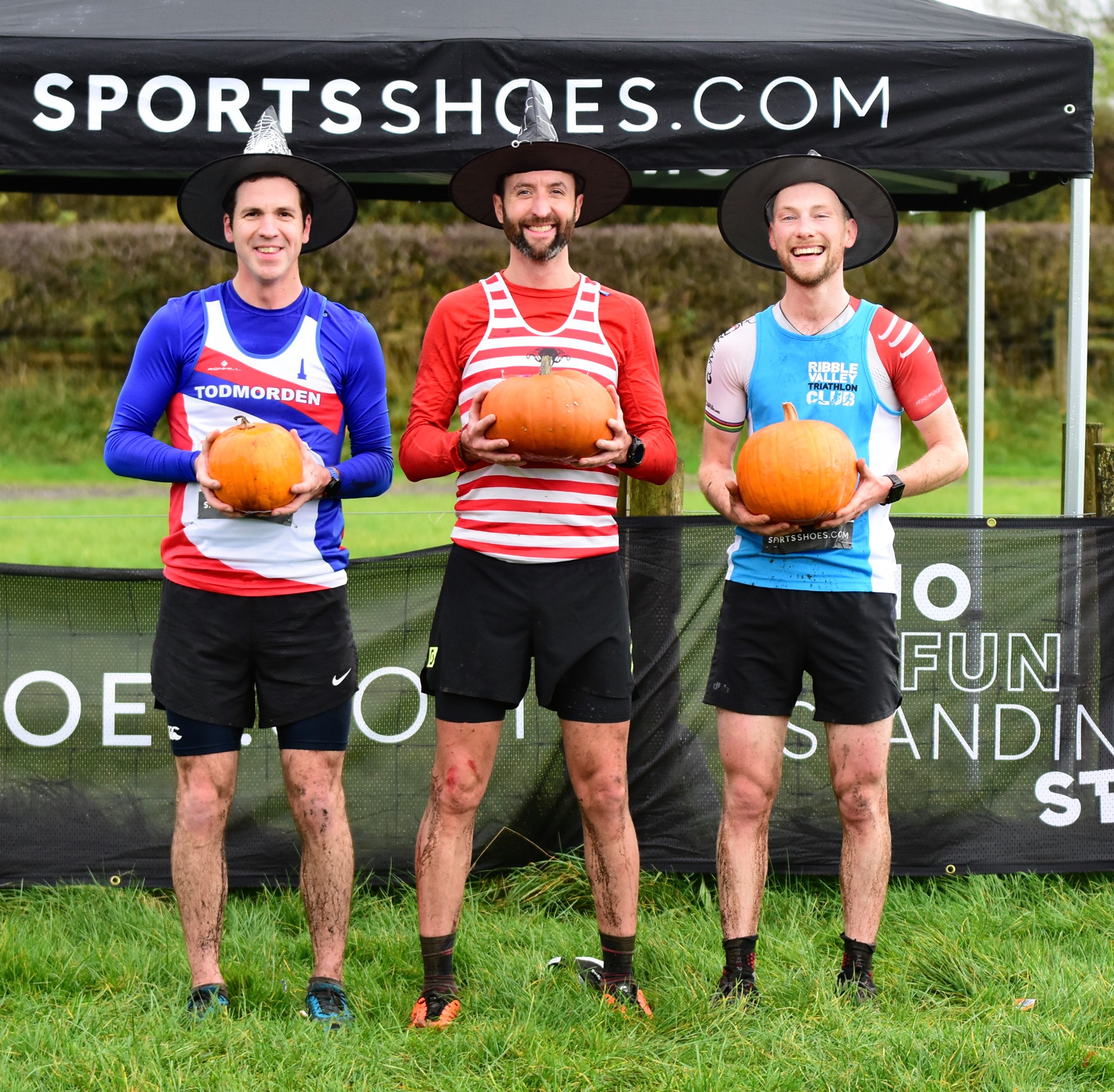 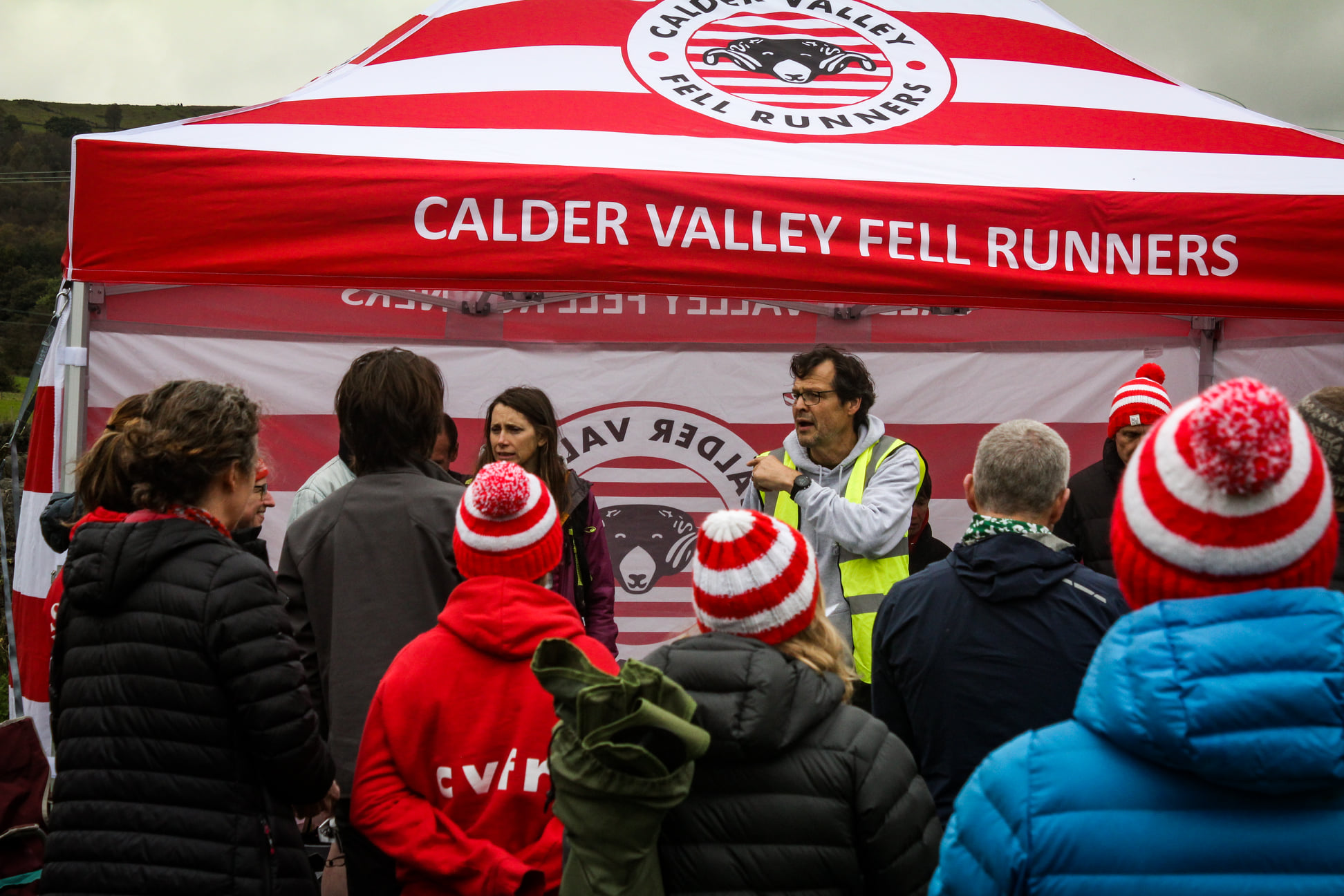 No running club anniversary would be complete without a race and so, the Anniversary Relay was conceived to form a big part of the celebrations. With fifty-six club members racing in 14 teams of 4 plus marshals, event field helpers, photographers and film-makers, prize production elves and event organisers. Everyone gave it their all…and some a little more. 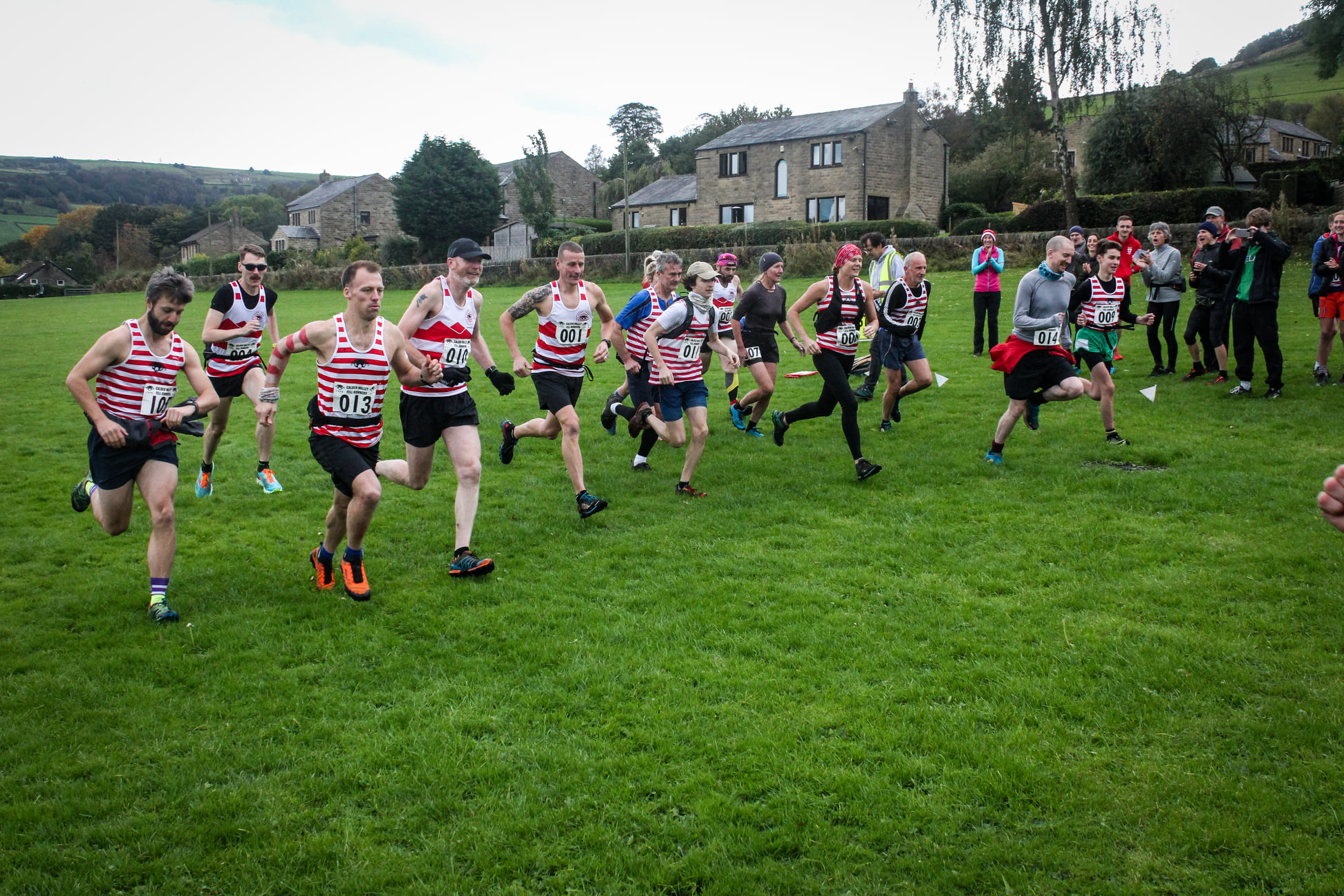 The course, a 4.65km loop from Stubb Field, was devised for the event to take account of juniors’ welfare, slower runners, potentially poor weather conditions and still provide some competitive racing and a good bit of bog snorkelling along the way. On the day, a few unexpected visitors arrived to spectate including a large herd of cows on the moor and four very excited horses in the first field. The runners took it all in their stride. 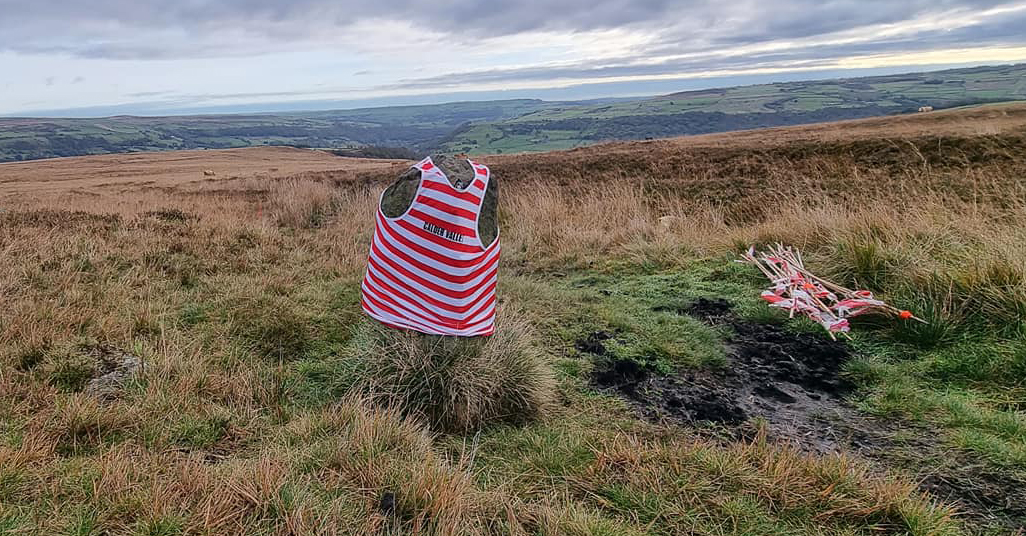 The race started with a decent climb to below and then behind Daisy Bank before levelling off for a long trod skirting the top of Broadhead Clough before turning right onto Erringden Moor to a boundary stone sporting a vintage club vest. The rest of the race follows the Winter Handicap route back down to Park Fold before a fast finish to Race HQ.

And we certainly got some exciting finishes with Andy Smith narrowly beating a tiring Andrew Davies to the line, a close finish between Sarah Noot and Charlotte Wetton on Leg 3 and junior, JD Anderson-Martin, putting in an amazing effort to hold the fast-approaching Martin Howard to a tie on the line with both teams finishing with an identical time. Martin also put in the fastest leg overall in 20:37. 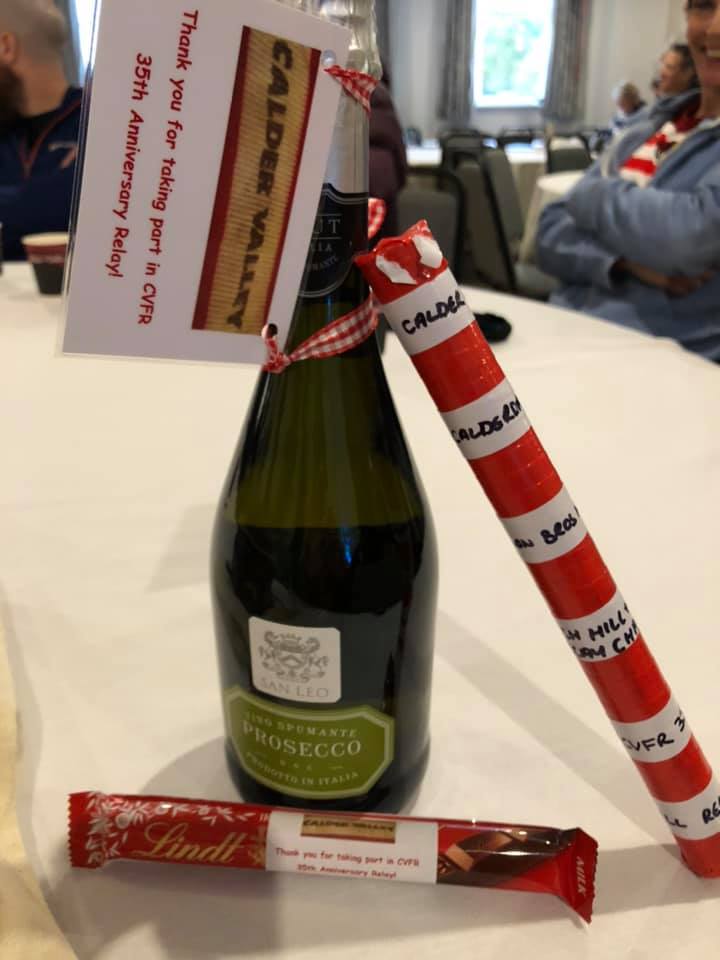 The relay was billed as a fun event, inclusive but competitive with teams encouraged to put together interesting mixed combinations including founder members, juniors, veteran men and women. Everyone joined in with some great mixing up of age, gender and experience. We had a new member from Belgium enjoying their first race, five juniors spread across the teams, at least three V70 vets and one team, ‘The Navigators’, with an average age in excess of sixty. 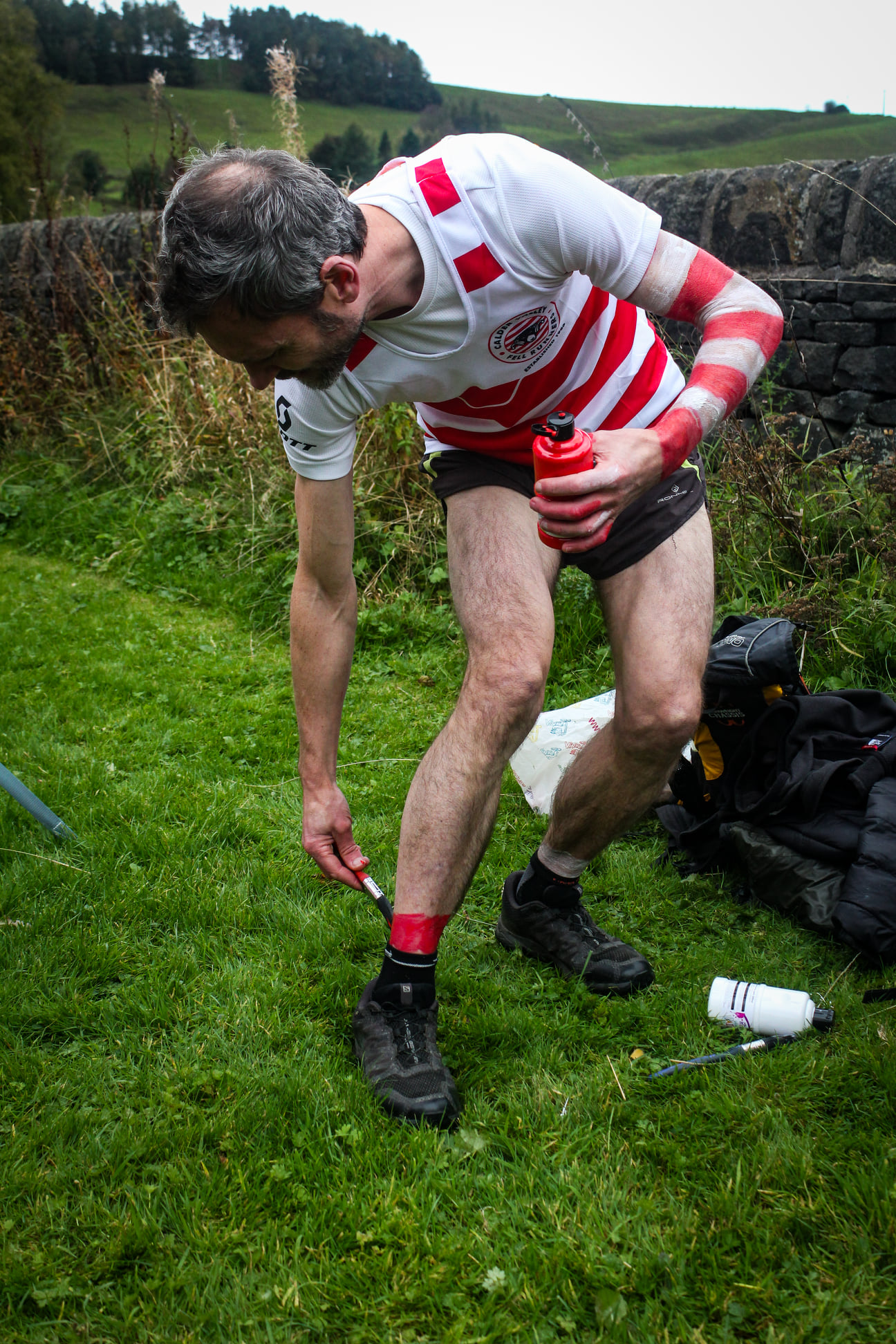 There was an extra twist to the event – rather than ask teams to carry and pass-on a baton, each team was invited (well, required) to enter a ceremonial baton in the Baton Design Competition. We had a brilliant mix of designs with one team painting parts of their bodies in red and white hoops, a unicorn head sporting the club colours and a leek with a red ribbon embellishment. There were a few traditional batons that were favoured by the judges alongside more considered designs – a wooden spoon quilted in the colours of Halifax Harriers and CVFR and an arrow beautifully wrapped in an ordnance survey map – the Navigators entry of course. 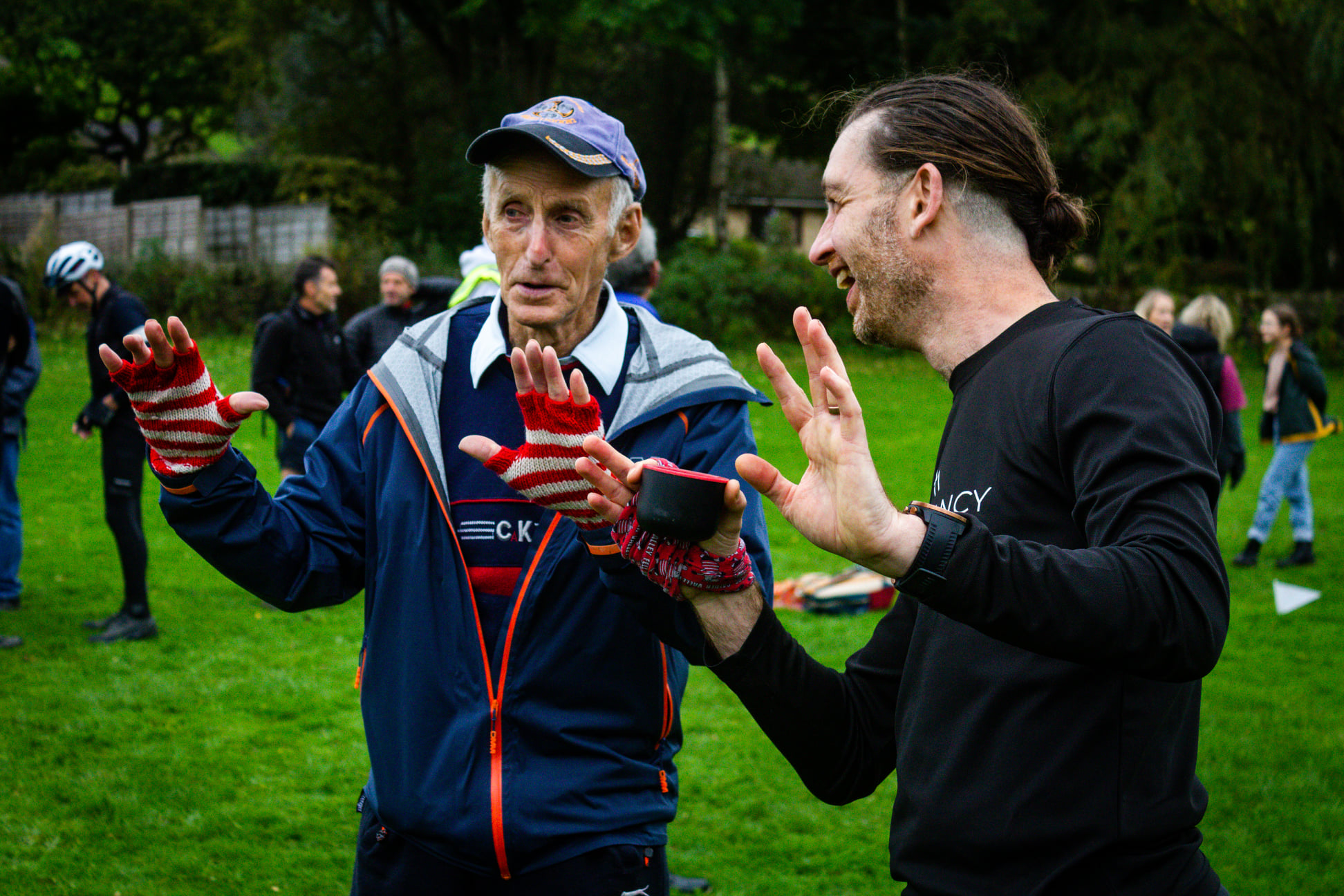 And there were guests, fell racing royalty no less with Joss Naylor and his partner Margaret joined by FRA Chair, Charmian Heaton, cheering teams on and judging the Baton Competition. Joss was joined by the legendary Nicky Spinks to award prizes at Mytholmroyd Community Centre after the event.

The day was blessed with fair weather and the course had dried out a little from the deluge of rain earlier in the week. The aim was for an event that would provide for a good race yet short enough for all teams to have finished in around about two hours. And true to club form, that’s what happened. Of course, speed and experience will win out with Gav ‘Mullers’ Mullholland running a brilliant anchor leg to hold off both Toby Sydes and James Logue to claim first place in a time of 1:35:31 and with the final team anchored by Stella Christanthou in 2:03:31.

In any normal race, first place is first place and Mulholland’s ‘Star Spangled Slackers’ were called up to collect their prize ahead of the others. But in the spirit of the Anniversary Relay, the third fasted team, ‘CVFR Through the Ages’, captained by the boyish Shaun Godsman not only made the top three but did so with an MV70, a Founder member and a junior on the team and were elevated to Joint 1st position after a Stewards’ Enquiry. ‘Luddmordities’ were moved up from 4th to Joint 3rd alongside ‘The Great White Kate and Sidney Pie’. 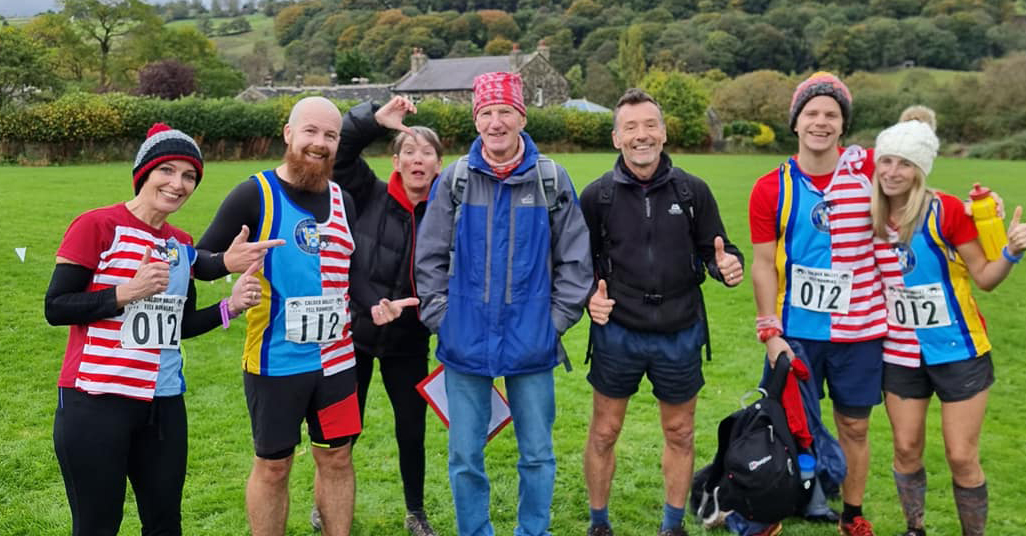 Other notable mentions must go to ‘Vet on a chair…with G&T on the rocks’ for their name alone (it does make sense but requires some explanation!); The Champions who, perhaps because of their name and despite their relative youth slipped down the field to 11th overall and ‘The Shirts’, formerly known as ‘Calder Roots’ who sported half-and-half vests fashioned from a Harriers and Calder Valley top. ‘Luddmordities’ and ‘FourMustDoTussocks’ entered majority women teams (three of four members) and a tribute goes to ‘The 1650s’ who had two juniors, an MV50 and FV50 on the team. 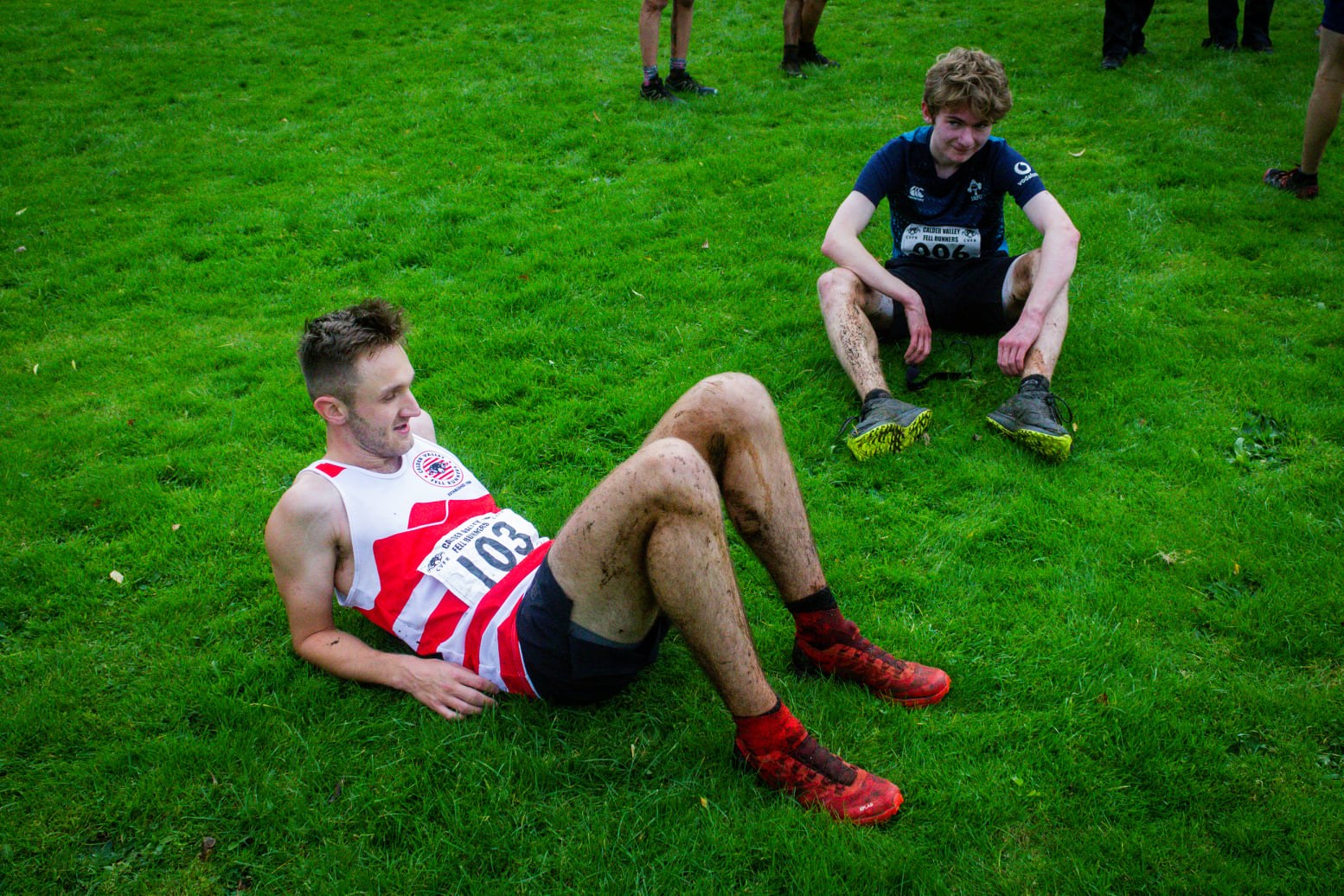 Martin and JD after a fabulous sprint finish

There were some interesting family battles going on within teams with junior, Euan Logue pipped by his dad by 10 seconds, sisters Natasha and Susannah separated by only 9 seconds and junior, Emilia Wright, outpacing her mum Di by a country mile.

A special mention must be given to all the juniors who raced. As well as JD, Euan and Emilia – Tom Owen and Elijah Peers-Webb both ran brilliant legs for their teams. And to the Founder members who turned out to support the event – some running competitive legs in the relay and others simply enjoying the reunion and the event itself.

Our resident statistician, Andy Wright, has done a great job of crunching the numbers with each team member’s time recorded for posterity along with a list of fastest to least fast times.