This weekend was another bumper one in the fell-runner calendar. As usual, Sunday’s Yorkshireman Off-Road Marathon was particularly popular with the red & white hoops. A number of the club’s runners took on this year’s full & half-marathon routes in the sunshine across the local hills, through bogs & mud. 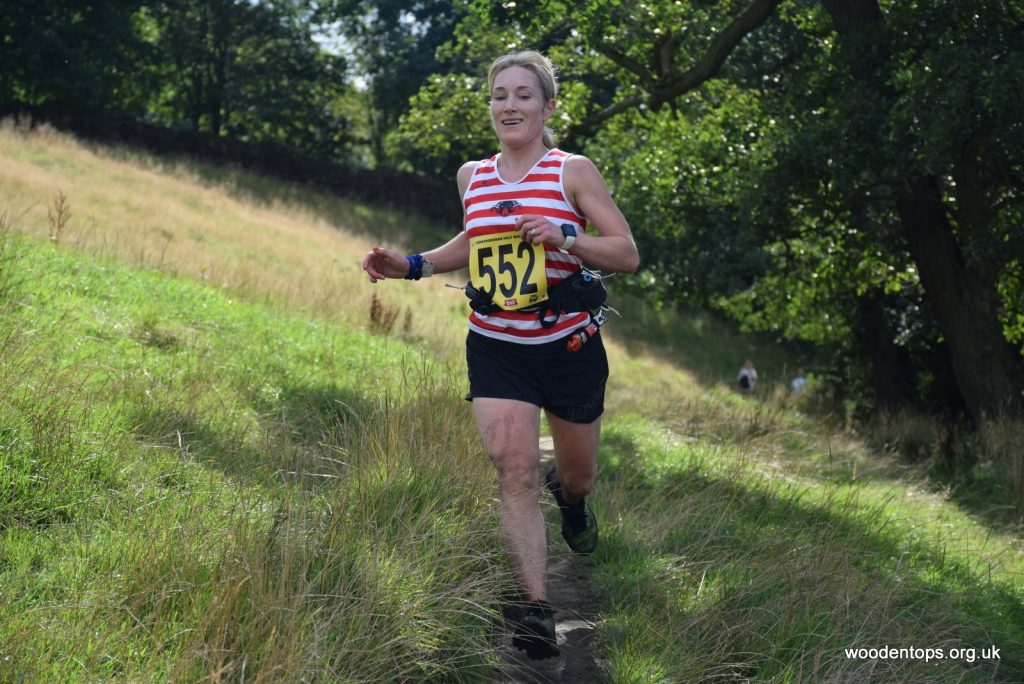 Calder Valley’s Lucy Collins ran a fantastic 13.1-mile half marathon race, to finish in 1h57:52 – 10th overall & a full 4.5 minutes ahead of the second-placed female runner. Other notable results in the half marathon include Darren Earnshaw and Andrew Davies, who finished 26th overall (7th in the MV40 age category) & 80th overall (5th MV60) respectively. 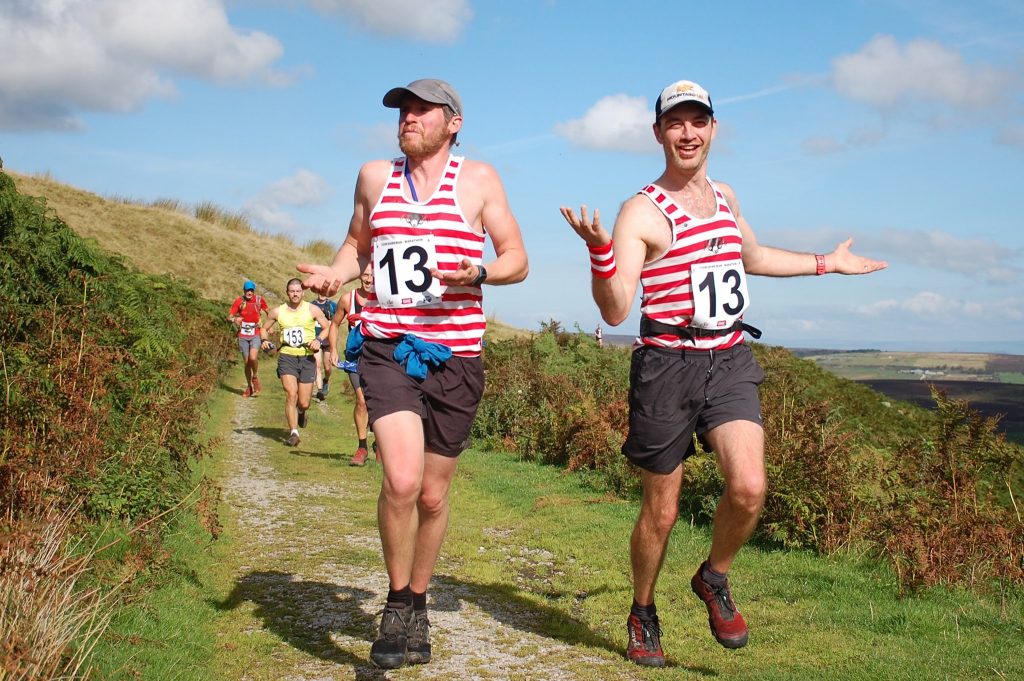 In the full marathon, Dan Marsden was the first CVFR runner to cross the line – finishing the 26.2-mile route, with its 1,000m of ascent, in the top 15 overall & the top 10 in his age category. For the men, John Allen, Ben Cliff also ran strongly, finishing 33rd, 53rd (22nd MV40). In the women’s full marathon, Kate Pope of Calder Valley (79th overall) finished 5th FV40, closely followed by Gloria Aysuo & Christina Turner in joint 7th place. In the full marathon pairs, Paul Haigh & Iain Illstone not only ran well but managed to keep a smile on their faces nearly the whole way around – & finished an impressive 2nd place for the pairs race, in just over four hours. 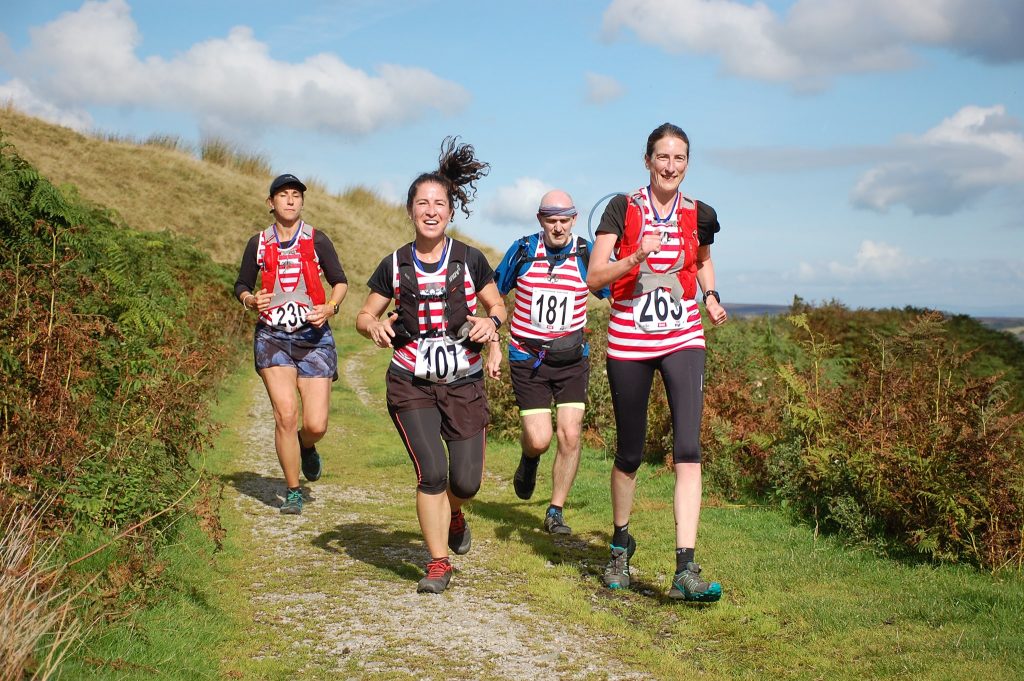 Slightly further away from home, also on Sunday 8th September, Anthony Costello flew the red & white stripped flag for Calder Valley at the 2019 Bradley fell race, finishing the 3.5 miles with its 900ft of climb 27th overall & 5th in the MV50 category.

Further away again, this time in the Lake District & on Saturday, 7th September, a number of the club’s more serious racers competed in the English Championships counter the Derek Price Memorial Grisedale Horseshoe race. As a traditional fell race, runners must choose their own route over just shy of 10 miles between check points in this tough AM race. With its 1525m of climb across rough mountainous terrain, this race is well-known for its poor weather conditions. This year, however, it was the heat that posed more of a challenge than the more usual, rain, clag & mist.

CVFR’s Adam Osborne was the first red & white hopped runner across the finish line in 12th position overall (3rd M40) in 1h53:49. CVFR not only secured an impressive 1st, 2ndplaces in the MV45 age category with Karl Grey (19th place overall) finishing in 1h56:06, closely followed by Darren Kay (25th overall) in 1h58:42, but with good runs by Shaun Godsman & Mark Taylor had four of the first six finishers in this age category. U23 runner Martin Howard also ran well in a tough field to finish in the top five in this, the youngest age category for this tough race (65th overall).

Finally – & further away again – this time in Scotland: Saturday, 7th September, saw three of the club’s hardiest runners – Stephen Smithies, Helen Buchan and Blair Garrett – take on the infamous Ben Nevis 4000 race. Veteran runners Stephen Smithies & Helen Buchan both ran exceptionally well to finish in 2h13:46 & 2h47:12 & place (107th & 321st overall respectively). Given the heat and sunshine, many runners recorded slower times than hoped for the 46-km race, with its 4100m of climb on the UK’s most iconic mountain & highest point. Garrett, however, was delighted to buck this trend, finishing over four minutes faster than his 2018 time (312th overall). He commented how the ‘unusually clear’ conditions afforded the runners ‘sensational views’ on the way up but most were no doubt too focused on ‘scree surfing and navigating death defying rocks’ on the way down to appreciate the amazing panoramas. 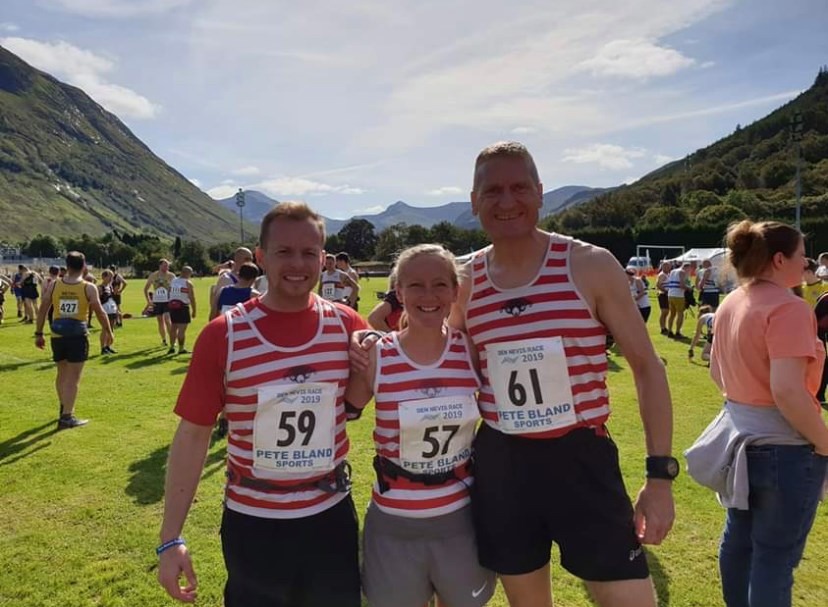