Sedbergh Hills Fell Race is not one for novices, nor the faint hearted! With 6000 feet of climb over 14 miles, this category AL race packs a punch. To put that into context, Sedbergh averages more than 400ft of ascent per mile. Nine CVFR braved the trip out of the valley to Cumbria take on this penultimate long race in the Club championships. Their efforts were rewarded, with Calder’s Karl Gray and Jo Buckley bringing home 1st MV40 and FV40 prizes (finishing 2nd and 33rd respectively). Helen Buchan finished 2nd FV40 (49th overall).

CVFR’s Catherine Holden, paints a good picture of what it was like. “It was as expected, a tough race. The weather was kinder than forecast, but that didn’t stop us getting buffeted by 20-30mph winds trying to stumble up the Calf and traverse the Calder (no relation!). Several were happy to get round in one piece and claim their long counter for the club champs.” 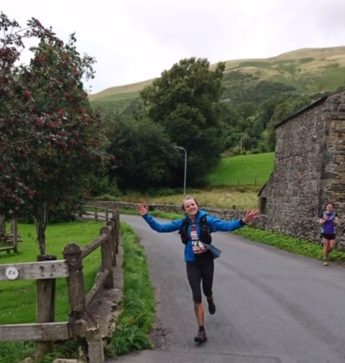 James Cooke was leading Catherine in the race until the last mile when he inadvertently climbed another hill. He crossed the finish line saying “bad times”. That may have summed up Sedbergh for some.