June-July is always a busy time of year in any runner’s diary – with summer series runs, local races as well as national & international meets all taking place in the past week.

For CVFR, the main event of the week was the mid-week local Cragg Vale race on 26th June. Expertly organised by residents of the village & based in Cragg Vale church, this event is as famous for its post-race beer & butties as for its midge-infested finish line. This year saw a bumper turnout, with 112 runners braving the rain to race.

Todmorden Harrier’s Andrew Worster had an easy overall win, completing the 4 miles & 800ft of ascent in 26.31 – only 4 seconds shy of the 2008 all-time record. In second place, Salford Harrier’s Gary Priestly & in third Calder Valley’s Martin Howard (first Under 23) all finished well ahead of the rest of the field.

For the ladies, it was another strong run by Calder Valley’s, Natasha Butterfield, who finished 33rd overall & first female in 33 :40. Todmorden Harrier’s Rebecca Patrick & Barlick Fell Runner’s Jacqueline Collins raced each other to the line to take 2nd & 3rd place respectively.

A big thank you also needs to go to the Calder Valley Search & Rescue Team who came to the aid of an injured runner administering emergency first aid. All proceeds from Todmorden Harriers’ newly reinstated Crow Hill Reverse Race on 6th August will be going to this fantastic organisation as part of local recognition of all they do to support local fell races. 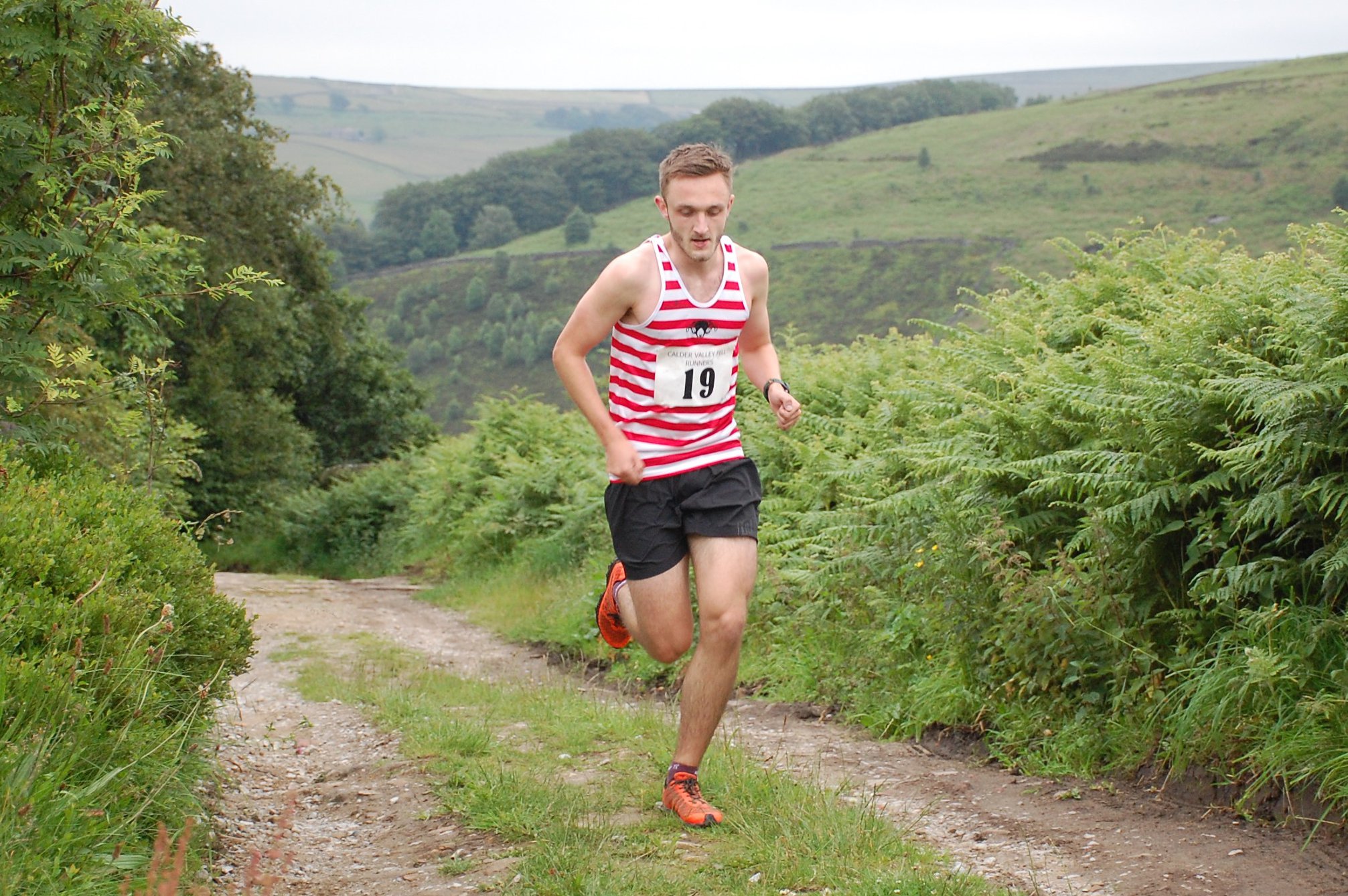 Further afield, other notable races & results in the past week included CVFR’s Chrlie Ing who was delighted to get his first 1st place finish in a British Open Fell Running Association (BOFRA) race at Kirby-in-Furness’ Community Centre Derby on Saturday, 29th June. This tough four-mile race packs a punch, with 1300ft of ascent, including a long climb, a fast descent & a further climb up to the moors before turning back on itself for the second half of the race. Despite getting a little lost on the moors, Ing had the strength in his legs to hold onto his lead & retain the trophy for CVFR (won last year by fellow red & white hooped Ben Mounsey).

Saturday was also the date of the most recent Lakeland Ultra races. A trio of Calder Valley’s ladies took on this challenge. Stella Christanthou & Diane Wright ran the 55km route (plus an extra 3km that somehow snuck in – starting & finishing in Ambleside & taking in much of the central Lake District – finishing in an amazing c.10.5 hours (official results still pending). Fellow CVFR V40 runner, Gill Dickinson ran the 23km route. Ultra races are a serious test of stamina & willpower, without Saturday’s heat, which soared into the mid 20s, making any running that much harder & these longer distance all the more impressive.

On Sunday, 30th June, Calder Valley’s Heather Pritchard took 5th place in the FSEN category (13th female overall) in the 10km Castle Howard Trail Race. Pritchard recounts how, despite ‘struggling with the heat’, she found ‘the going easy compared to the fells’ – but was very grateful for the post-race beer. Also on Sunday, CVFR’s, Carole Fryer competed in the Trawden 7 Trail Race, finishing the route a whole minute faster than her 2018 time & crossing the line as first female V50.

In addition, this weekend saw CVFR’s Holly Page back racing internationally at the Adidas’ Infinite Trails World Championships. In a truly epic event, runners raced in relay teams from 4am Saturday until 1am Sunday on the tracks of Gastein/Salzburger in Austria – making their way up and down some of the most beautiful routes in the world in their 60k/3,600vm loop. For Page, coming off the back of a broken foot, it was a little strange not to be chosen for one of the main teams, but undeterred, she was adopted by a duo from Western University & the three ran their hearts out.

Page not only finished fastest woman by an astounding 9 minutes, but also recorded the 9th fastest loop in the men’s times – & this despite suffering from a stitch during the first half of the race & feeling unwell during the second. She recalls having really enjoyed running high up on the ridge, & loving the steep descent sections with no paths, which ‘felt like a fell race’, even if the last 20km was more like a “road marathoner’s” route & seemed to go on forever … In typical style, Holly was quick to point out that this has all served as excellent training for the upcoming Sky race series, where she looks forward to racing & hopefully defending her title from last year. 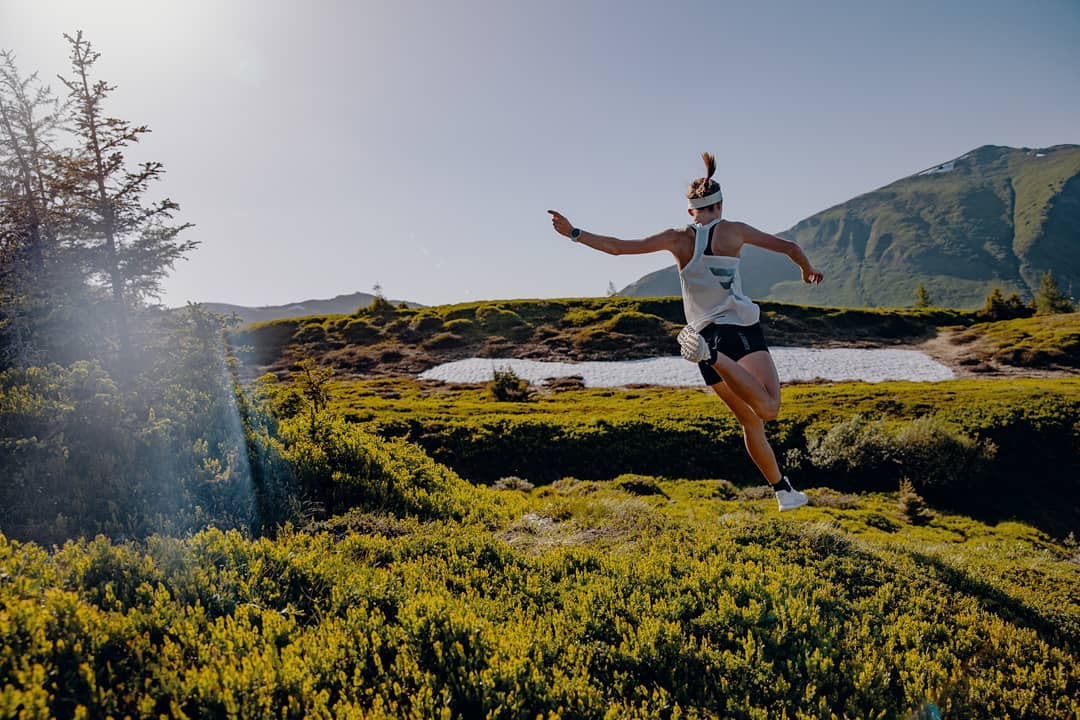 Holly Page – no credit given