The 10.7 km Lee Mill relays took place on Sunday from Rossendale, Lancashire, running from Stubbylee Hall, thanks to race organiser Richard Stott and his team.  Launched 5 years ago, Calder Valley took inaugural honours in poor weather conditions.  Ever since, the club has turned the event into an in-house club race/fight (non-contact mostly), thanks to Richard Ingram (aka Bert) and his merry men. 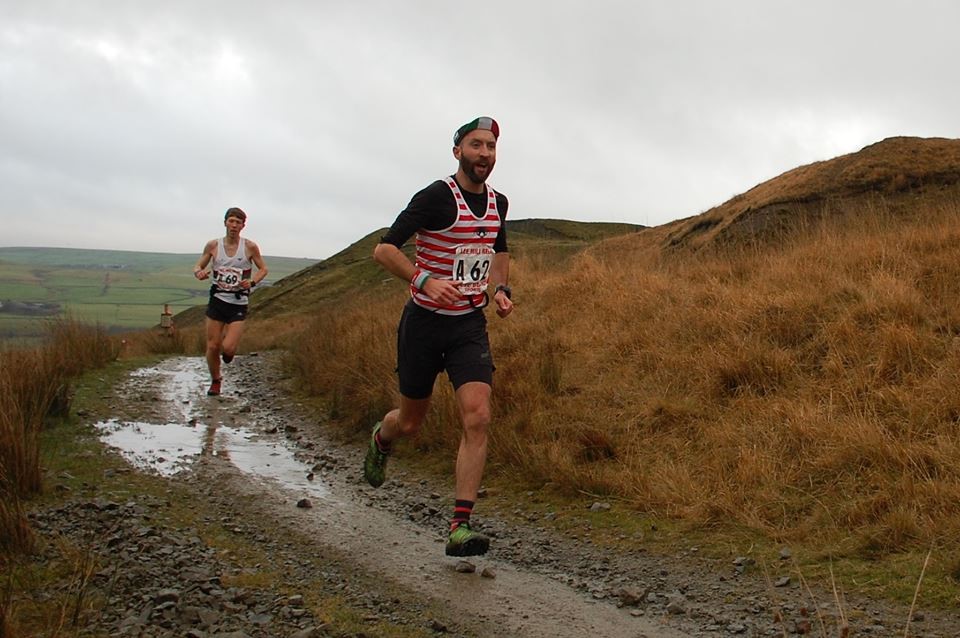 In a nutshell several teams of 4 are selected via designated captains, from a pool of victims, under Ingram’s stewardship, and when done, volunteers are struck by mystery injuries and illnesses, family pressures and bad debt, forcing them to pull out.  This in turn causes hand bags to be drawn until a re-draw stops captains bringing in ringers and illegitimates such as Gavin Mulholland.  Each team coughs up a sum of money with the losers spoiling the winners in the post – race festivities. 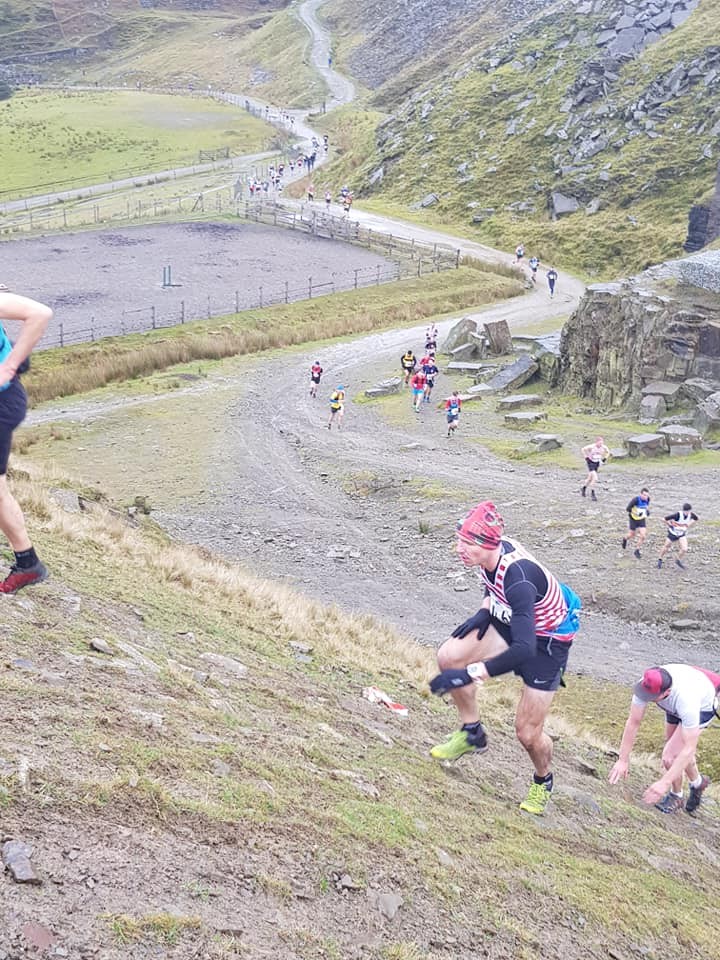 Most teams put their top dog on the first leg to give them a head start and this was the case as Ben Wolsey Mounsey set the 2nd fastest time of the day, thanks to his personalised pacer Toby Sydes, with Karl Gray putting his squad into second.  This clearly wasn’t enough to convince Mounsey of the win, and fearing the loss of his weekly dinner money, he scarpered off home.  The Wolsey Warriors, also including Gareth Clarke and Giles Simon, who went on to win the valley battle.   Iain Powell, in charge of pre-race team betting, was obviously concerned about losing sweat, as well as his bet, as he set off in a full waterproof jacket. 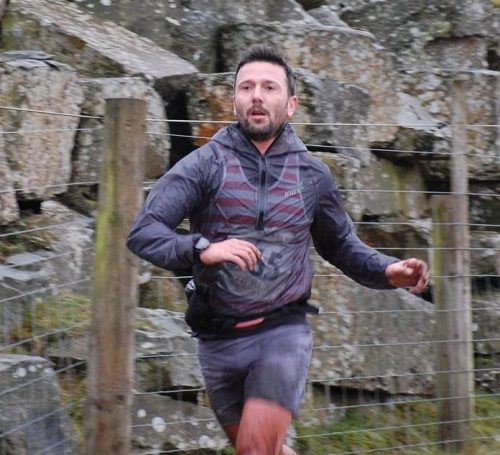 Two teams kept back their top trumps in Godsman and Mulholland for leg 3 that helped narrow the gap between three of the teams for second spot.  It was the Hobbit Hole Huggers (Marsden Costello Mulholland) who finished 2nd as they kept back Toby ‘whippet’ Cotterill who scalped Simon Fisher before going on to pass a valiant James Cooke, in the last few hundred metres of the course, after almost 4 hours of racing!  Waiters for the day were the CVFR nav. kings and Queens, who in their own serfdom, were able to put their compasses away and follow their own tracks to and fro for the rest of the day. 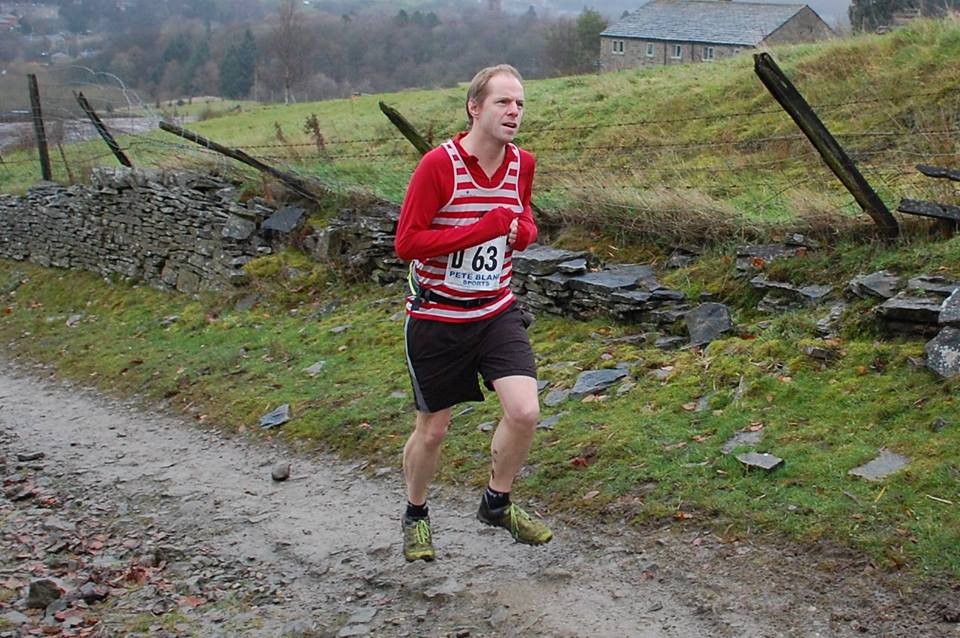 It wasn’t all fun and games as one runner, Dougie Zinis, took a nasty fall, coming away with a gash of a few inches, above the knee that needed stitches and surgical cleansing, though this mere flesh wound wasn’t enough to force him to retire.

Calder Valley Fellrunners chairman Bill Johnson was 4th out of 62 competitors in the ‘Peak District South 2 North‘ this weekend, a two-day stage race from Ashbourne at the southern tip of the Peak District to Marsden at the north end, a distance of 60 miles. The first half of the first day was fast, along the Tissington Trail, a continual gradual ascent for 20 miles. Bill deliberately held back on this section in order to save his legs for the more technical final 13 miles of the first day, through isolated Monks Dale and over Mam Tor into the Edale valley. The tactic paid off as he ended the first day in 3rd place with the runners resting overnight in Edale. His position was boosted by several runners getting lost in the final sections of the day and falling behind. 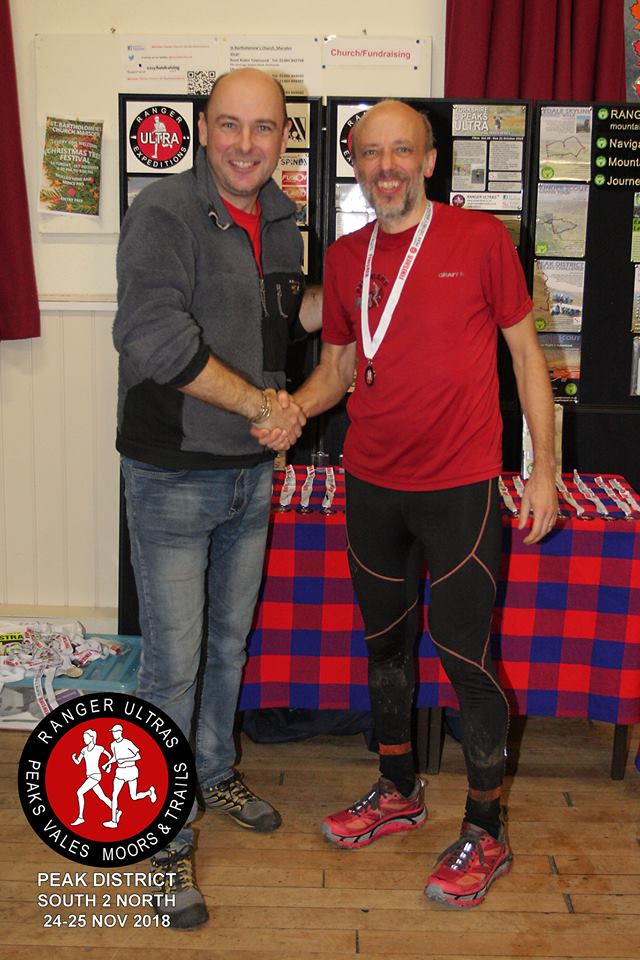 The second day’s route followed the Pennine Way over the Peak District’s most infamous hills: Kinder Scout, Bleaklow and Black Hill, for 27 miles. The weather turned unpleasant and a quarter of the initial starters did not complete the race. Bill held on to 3rd place until Black Hill when the 4th placed runner surged past and Bill’s legs were unable to respond.

Said Bill: “I’m absolutely delighted with 4th place and first V50 in this tough race. I worked really hard on the first day and felt it during the second, but kept up the pace until the end.”

The Half Trog (Beast) is a 9 mile fell race covering the moors between the Luddenden Valley and the Keighley Road. It starts at the Hare and Hounds in Old Town and takes in the bogs, and pathless wastes of Midgley Moor and High Brown Knoll, dropping down to Upper Dean Reservoir at the top of the Luddenden Valley. Nearly 10 miles in total. Last Sunday Calder Valley Fell Runners hosted the race with 68 runners starting but only 61 finished, 7 dropping out as the moors got the better of them. 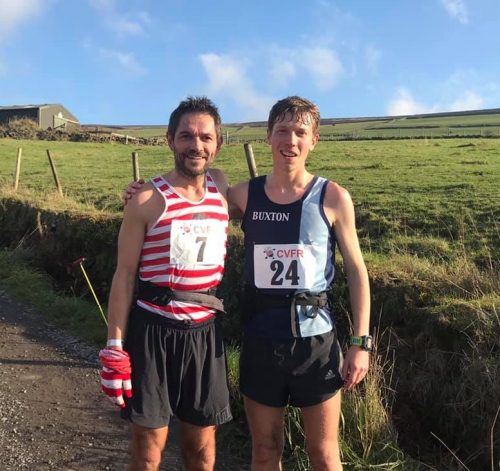 However Calder’s Karl (Machine) Gray got the better of the moors and the race by winning in a new record time of 1:09:29. He was chased round the course by Alasdair Campbell of Buxton AC who was never more than two seconds behind him for most of the course, Karl only outsprinting him in the final run in to win by 6 seconds. The women’s record holder, Nicola Jackson of Ribble Valley, was first woman back in 1:19:54 in 6th place overall. 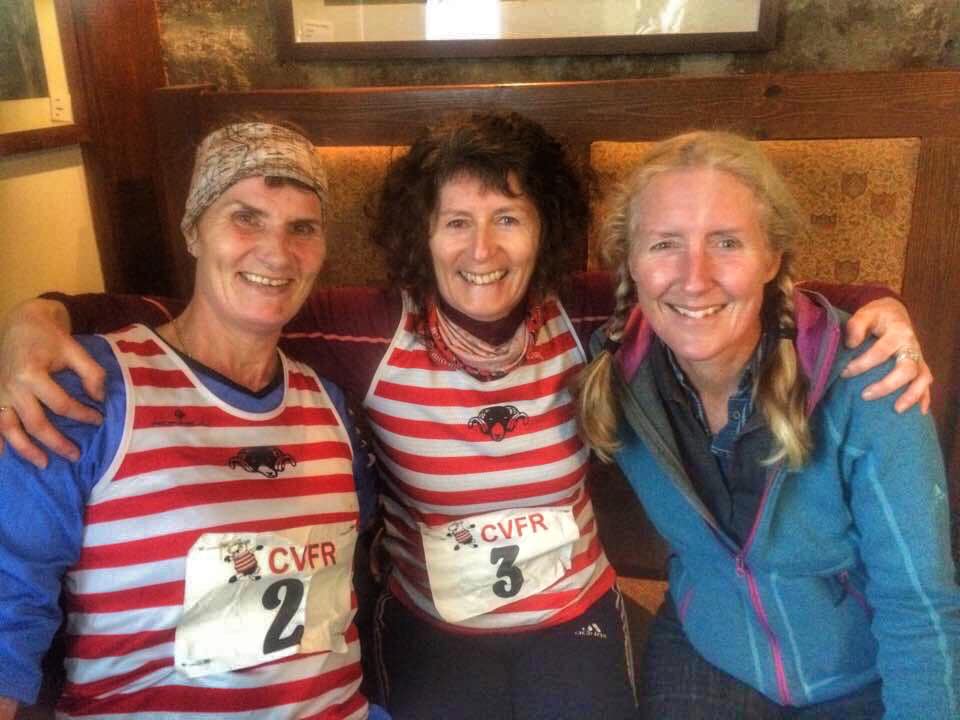 The final race of the Calder Valley Annual Club Championship was held on Saturday. A rare type of race in that the fell runners and cyclists head off at the same time on a five mile route from Shipley Glen climbing some 1000ft around Baildon Moor. The runners have the advantage on the climb with the cyclists having a gravitational advantage on the descent. 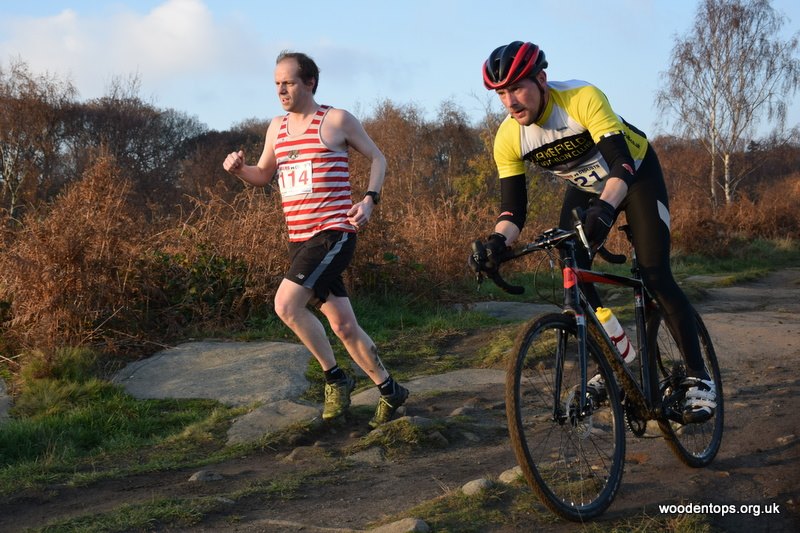 The race was won by Rob Jebb, an athlete who has won both the Three Peaks Fell Race and the Three Peaks Cyclocross race. With pedigree in both camps he chose to race by cycle on Saturday. 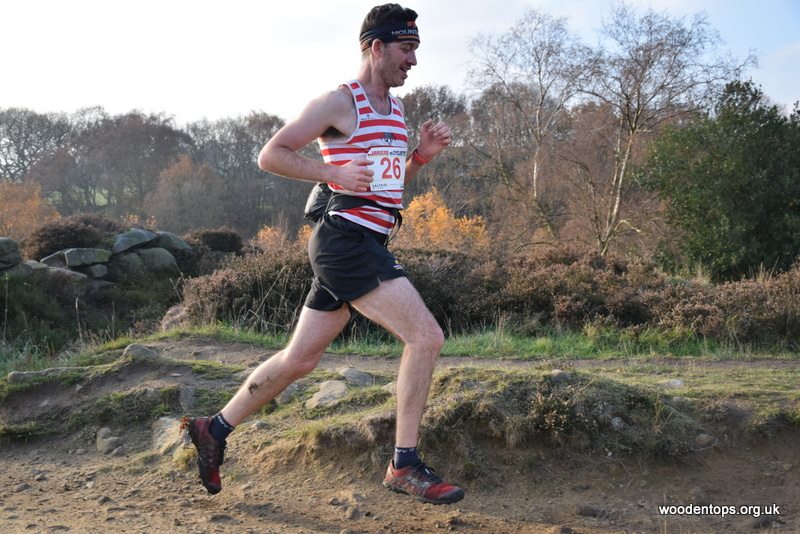 No results out as yet but some good photos available. Details along with the final club championship positions next week.

A seventeen mile torture fest of climbing six different ways over Pendle Hill. Why would anyone do that? Well it seems to be popular amongst the fell running community and in particular 16 members of Calder Valley Fell Runners. Despite the last race in the CVFR club championship being held on the same day these 16 decided to do a race that was more than three times as far and with five times as much climbing as the Harriers v Cyclists.

No results are out yet but the run of the day has to go to Ian Symington who was running well, near the front of the pack just after the 1st checkpoint, when he came across injured runner Mark Burley who had stood on something sharp which lacerated his shoe and foot. Ian, along with some other runners stayed with Mark, wrapping him up in the emergency blankets kindly donated by other runners and all putting on their own emergency clothing ready to sit out the chill wind that was on the summit of Pendle. An hour later the air ambulance came to airlift Mark off to hospital. Ian then ran back to race HQ but taking a detour to allow them to enjoy the tortuous second half of the course.

The first Calder runners back appear to have been mile muncher John Allan in about 2hours 50 minutes and Catherine Holden in about 3 hours 30. More details to follow when the results are released.

A new fell race on the calendar, the 5 mile Litton Birks Fell Race goes from Littondale up in the Dales, to the top of the 607m Firth Fell and back. With a £5 entry fee, a chip butty and a bottle of beer for all runners, what more could you want from a fell race? With 70 runners Calder’s Jo Waites was second woman back in 44.34 just behind Kirsty Hall of Wharfdale. Steve Smithies was first Vet back in 6th place. Ted Mason of local club Wharfdale won.