It’s a dark damp evening, so put the fire on, make a hot chocolate and get your 2019 diary out. The selection has been made for the races to appear in the club competitions next year.

They are listed below, and can also be filtered out from the website calendar.  (See the feed at the foot of this post which highlights all the races that are in any of the competitions)

END_OF_DOCUMENT_TOKEN_TO_BE_REPLACED 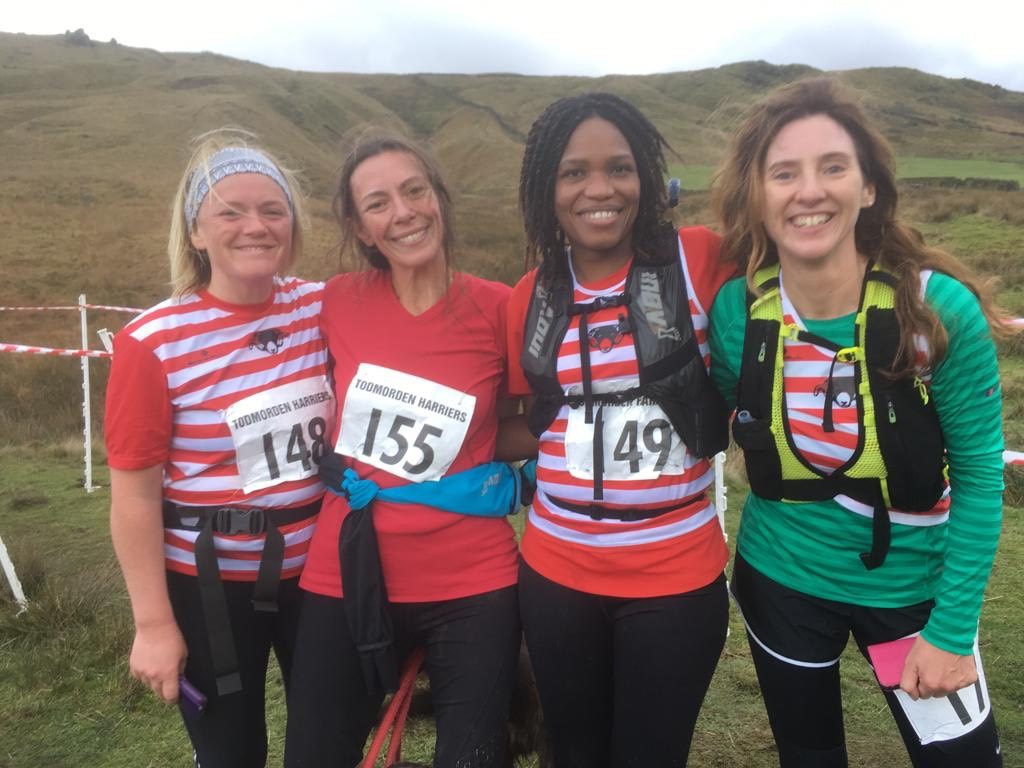 Last Saturday, over 230 budding shepherds and shepherdesses of all ages gathered on the start line for the ever popular Shepherd Skyline fell race, hosted by Todmorden Harriers. 34 were from CV, evenly split between the juniors and seniors. The latter was a fast, muddy course – with a steep descent off Stoodley Pike for the kamikaze descenders, immediately followed by a stiff climb back up the hill to keep the stout-legged fell runners on their toes.

This 6 mile route takes in 1148ft of climbing whilst offering stunning views across the valley from the ridge line. This years race saw a lose horse running wild at the top of Stoodley, adding to the excitement of the event. The junior routes opt for a shorter version, albeit as muddy, on the nearby hillside.

CV excelled in the race, dominating much of the prize giving. CVFR’s international star, Holly Page, delivered her usual impressive performance, coming in first lady in 47:54. 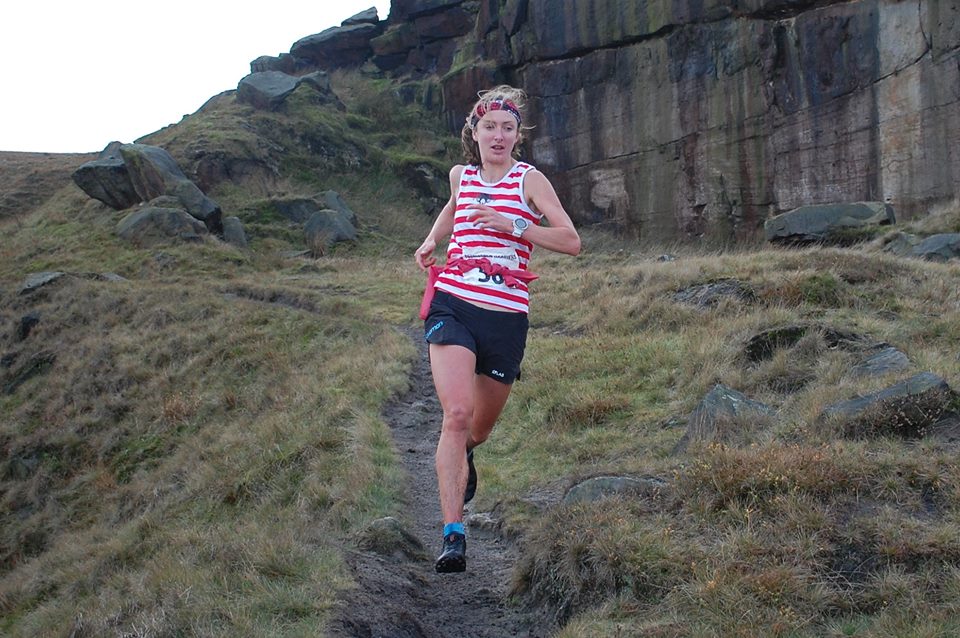 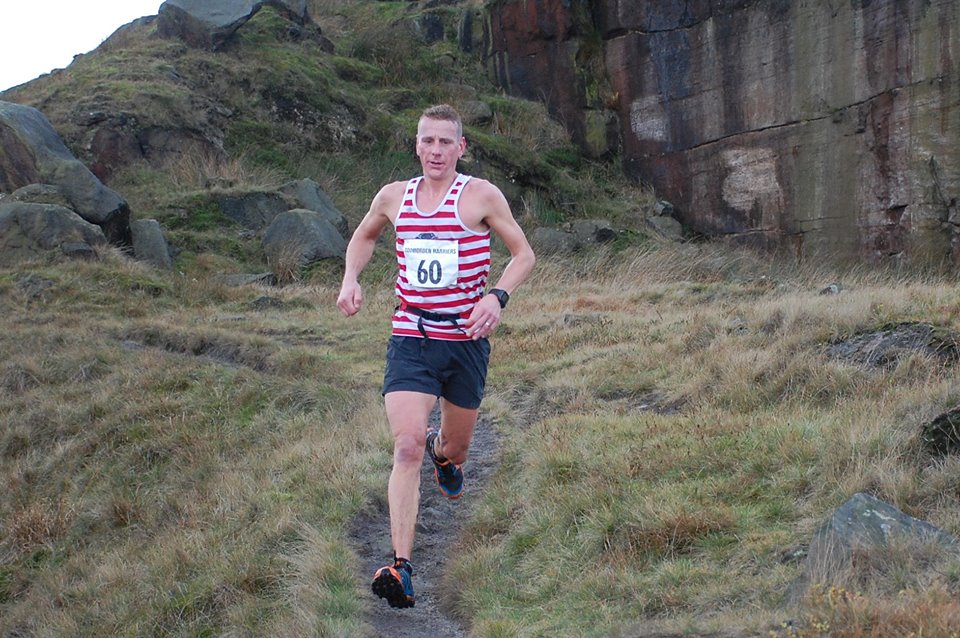 Another note worthy performance was from CV’s Helen Flage, her first fell race since the birth of her daughter earlier this year.

Said Helen: ‘It was quite a milestone for me. It felt great but I was much less sure footed and more cautious on the downhills but that will come back! The main thing was my lungs and legs worked’

Overall winner was Nathan Edmundson from Ilkley Harriers in 43:02.

The following day saw 8 CV heading to the Peak District for the 15mile Roaches fell race, the penultimate senior club champs event. Ian Symington was first CV home in 16th place. Tamsin Cooke took up the gauntlet to secure the previously unclaimed 3rd lady club champs trophy, which she’ll receive at the club’s do in Jan.

Elsewhere, 4 CV runners raced in the classic Dunnerdale race between the rugged fells of Lickle and the Duddon valleys in the Lakes. Although only 5 miles, it’s a tough course with superb scenery and a good pub at the finish. CV’s Math Roberts was 3rd from a field of 187 in 41:22

In a quiet weekend for racing, two Calder valley runners made it to the Cop Hill Fell Race in Meltham. A record-breaking turnout of 145 runners took on this 2 lap, 11k, multi-terrain race. CVFR’s Jo Stevens put in a fine performance to finish 2nd female (59th overall) and Blair Garrett did well, finishing 92nd 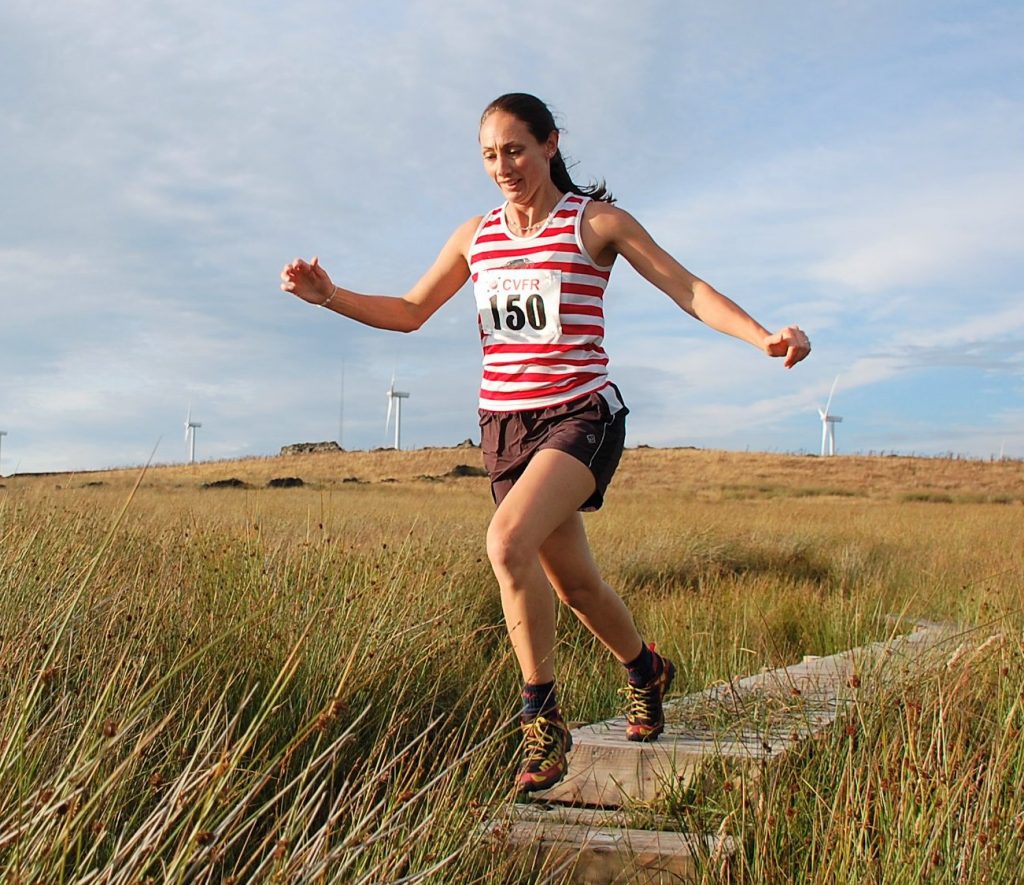 Race You To the Summit:
Saturday 27th October saw temperatures suddenly plummet, but that did not deter the 100+ runners who turned out for this local 7-km (4.3-mile) race, complete with 260m /853ft of ascent, with its route from the Summit Inn to The White House and back. The red & white hoops of Calder Valley Fell Runners were out in force to help Toby Sydes (running in number 100, as 50 was unavailable) celebrate his half century. 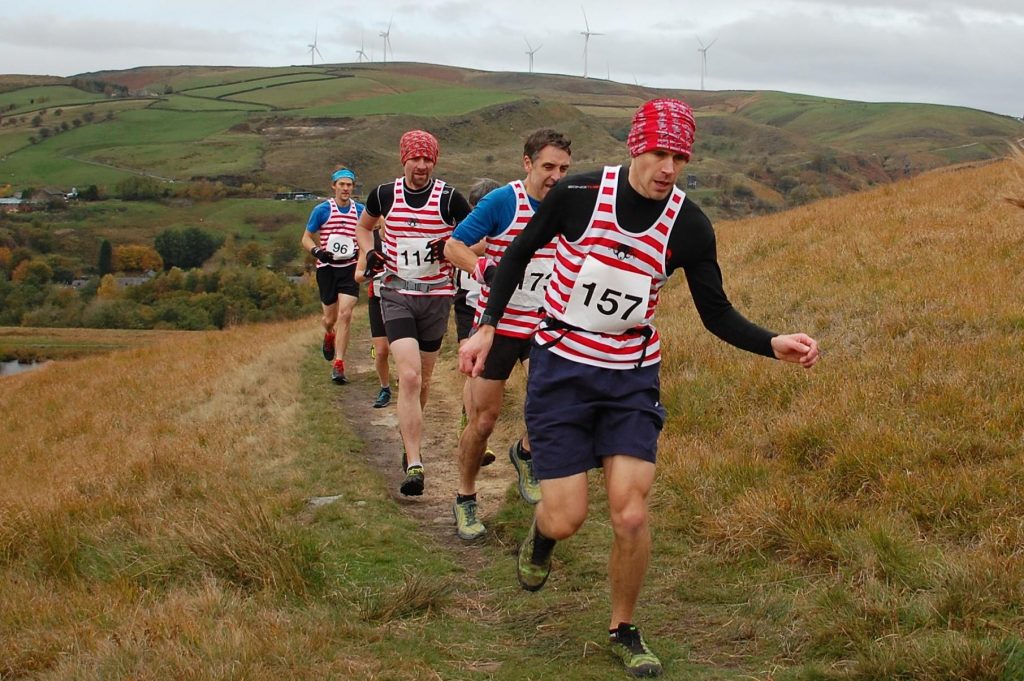 CVFR’s Martin Howard (2018 u23 fell running English champion) set off strong, leading overall all the way up to the summit, with Max Wainwright of Dark Peak close behind and a huge gap to 3rd place. Behind them a fierce battle was fought between four of Howard’s his team mates for who would finish second and third for the club. As the climb went on, red & white hoop, Matt Ray came into his own, and with both Howard & Wainwright taking a wrong turn on the descent, both found themselves a lot further back in the pack. Howard fought well, despite a badly sprained ankle, to finish only 41 seconds behind team mate Matt Ray, who ran his best ever race to finish 6th place overall in 33 :29. With veteran runner Mark Wharton finishing 16th overall (& 2nd MV50) in 34 :44, the red & white hoops took the men’s team prize, and with Liam Williams in 18th & Andy Wright in 20th (second MV40), had an impressive 5 finishers in the top 20. 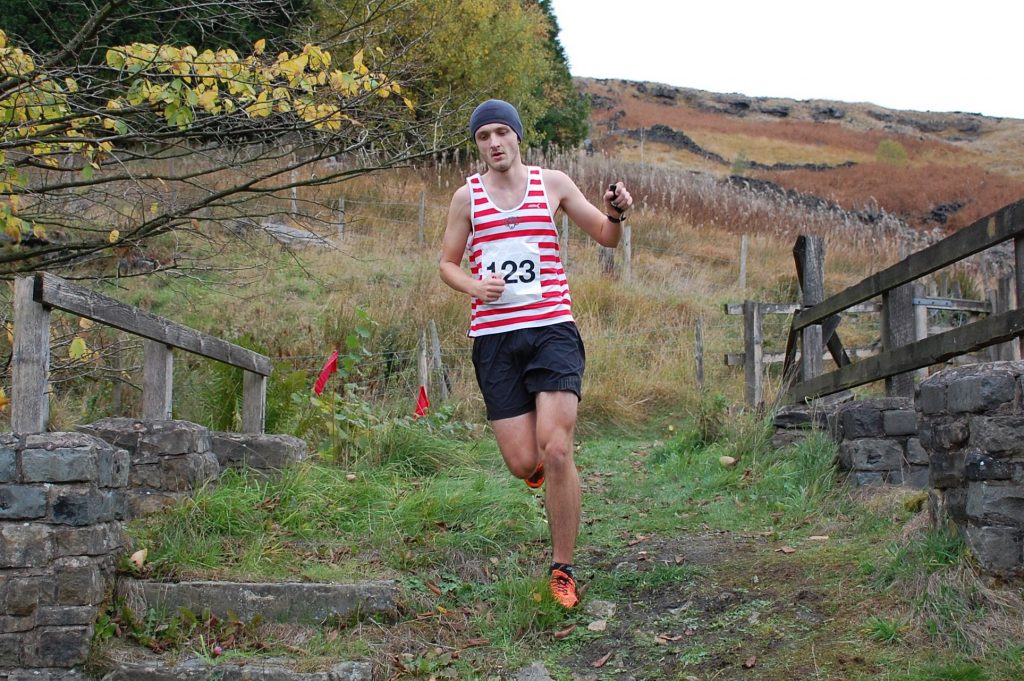 In the women’s race, Calder Valley’s Catherine Holden once again dominated the FV40 category, finishing second female overall in only 40 :12. Other strong runs that deserve a special mention included CVFR’s Charles Gear (3rd in the MV60 category) & Tim Brooks (MV40), with Gear running his best race ever and Brooks his best race of this year.

Photos of this race – a mixture of Mick Fryer & Dave Woodhead – as labelled:

51st Original Mountain Marathon (Two-Day Score Event):
Saturday 27th & Sunday 28th October also saw a number of CVFR members among the thousands taking part in the 51st OMM in the Brecon Beacons. Whilst all the CVFR competitors did well, battling the high & cold winds, coupled with sunshine & even a 30-minute snow storm to do a score class, only the ladies pairing of CV’s Jackie Scarf and Wharfdale’s Annie Milner won a prize – completing a brilliant race to finish first female pair on the medium score. The pairing of Bill Johnson & Phil Scarf got an amazing number of points on day 1, but the 2 points lost for every minute late back to base cost them dearly, seeing them lost a staggering 74 points, and so came home empty handed on this occasion. 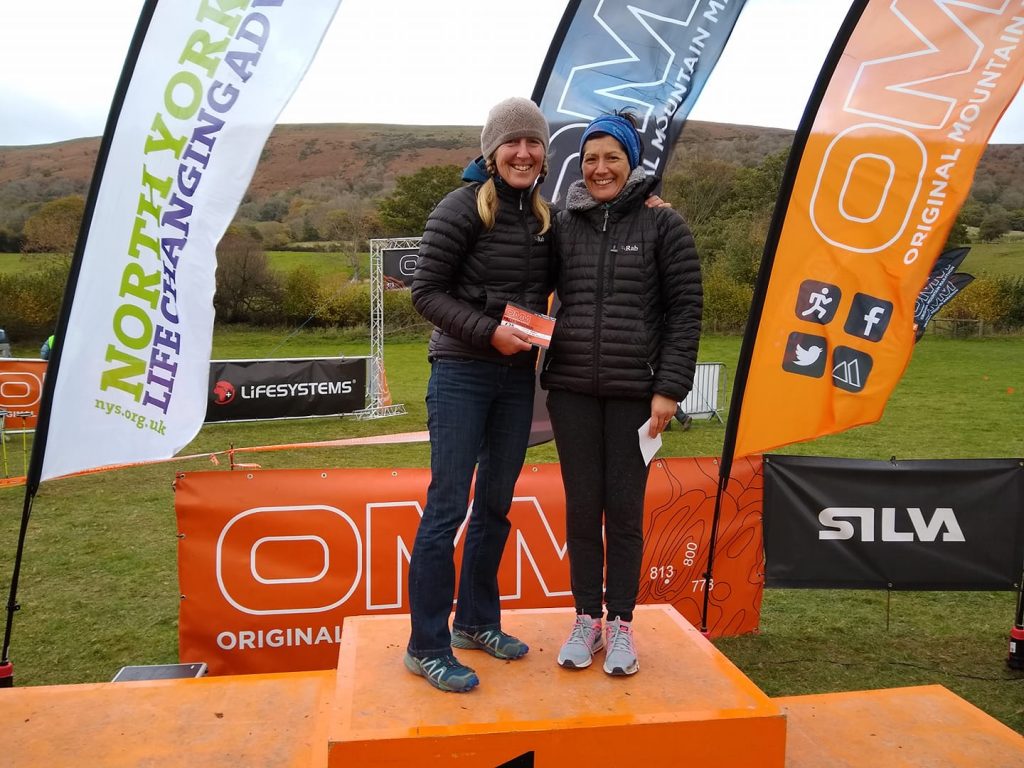 Brontë Way:
On Sunday 28th October, a handful of red and white hoops who had not compete on Saturday took to the fells, across the 12km (7.5m) & 351m (1152ft) of climb which constitutes the Brontë Way race. CVFR’s Jonny Croston was delighted to knock seven minutes off his time from 2017, finishing an excellent 14th overall (and 5th MV40) in 1 hour and 11 seconds. CVFR’s Carole Fryer also continued her strong season of results, coming in 102 overall and fourth in the FV50 category in only 1h 21 minutes & 55 seconds.

Quote from Jonny Croston: ‘Nice day for it though after a crisp start. The free pint of landlord is always a post-race bonus.’ 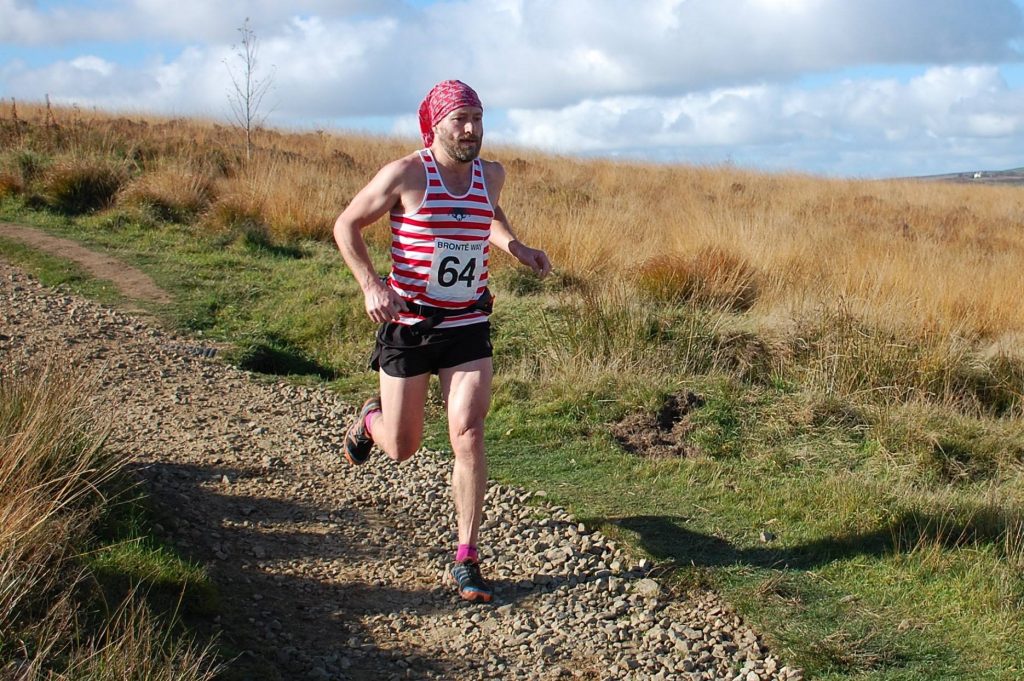 Too amazing to go be forgotten:
Amidst the excitement of the British Relays & Holly Page’s international trail running domination, Kevin Holt’s awesome performance in the beautiful Autumn sun on October 20th almost slipped under the radar. Holt came in 2nd overall (and first MV40) in the Round Rotherham, beaten only by the winner, Ben Hague, who smashed the course record, finishing only a slither over 6 hours. and first MV40 (over 11 minutes in front of the runner in 3rd place). Kevin finished the 50.5-mile route in 6h33 :08, a full 11 minutes ahead of the runner in third place, with a blistering average pace of only 7.45-mile a minute.

On the international front:
And to round up the weekend, Team inov-8 UK & Ireland enjoyed a bumper day at the Trofeo Vanoni Mountain running relay race in Italy. CVFR’s Ben Mounsey was delighted to once again be chosen to compete in this prestigious annual event in the little town of Morbegno, nestled in the Valtellina Valley in Northern Italy. The challenging 4-mile route, which runs along the historic centre of Morbegno and up the ancient paths (with almost 2000ft of ascent) that lead to the village of Arzo and back down again was extra tough this year, thanks to the inclement weather which was more reminiscent of the North of England than Italy.

The men’s relay race was a closely fought affair, and although the young French team emerged as eventual winners, four of the top seven teams were British, with a mere 13 seconds separating the teams in 5th, 6th & 7th place. Team @inov_8 UK, finished in an 7th place, with Calder Valley’s Ben Mounsey, running the last leg, demonstrating his skills in some crazy downhill work that saw him complete the impressive feat of overtaking four teams and clocking up the fastest time on the steep technical descent section of the course, helping his team to take 7th place. 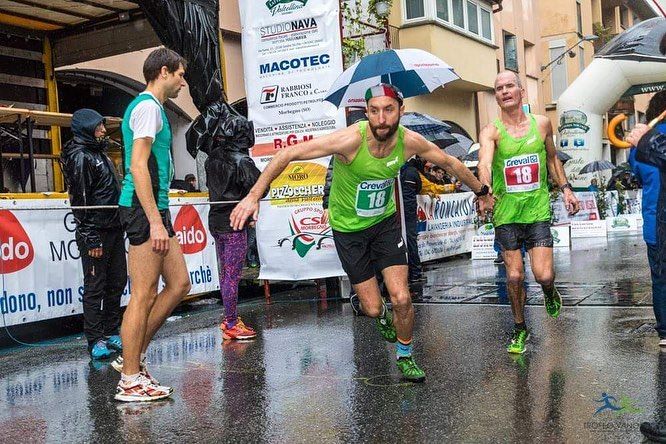