CVFR has seen its members surpass themselves in recent weeks, including notable runs from both Holly Page and Ben Mounsey, representing Queen & country internationally.

Ben Mounsey came in overall second to fellow GBR runner Ross Golan at the amazing Vesuvio Sky Marathon Race– a trail race of 42km on the world-famous Italian volcano on 6th May. 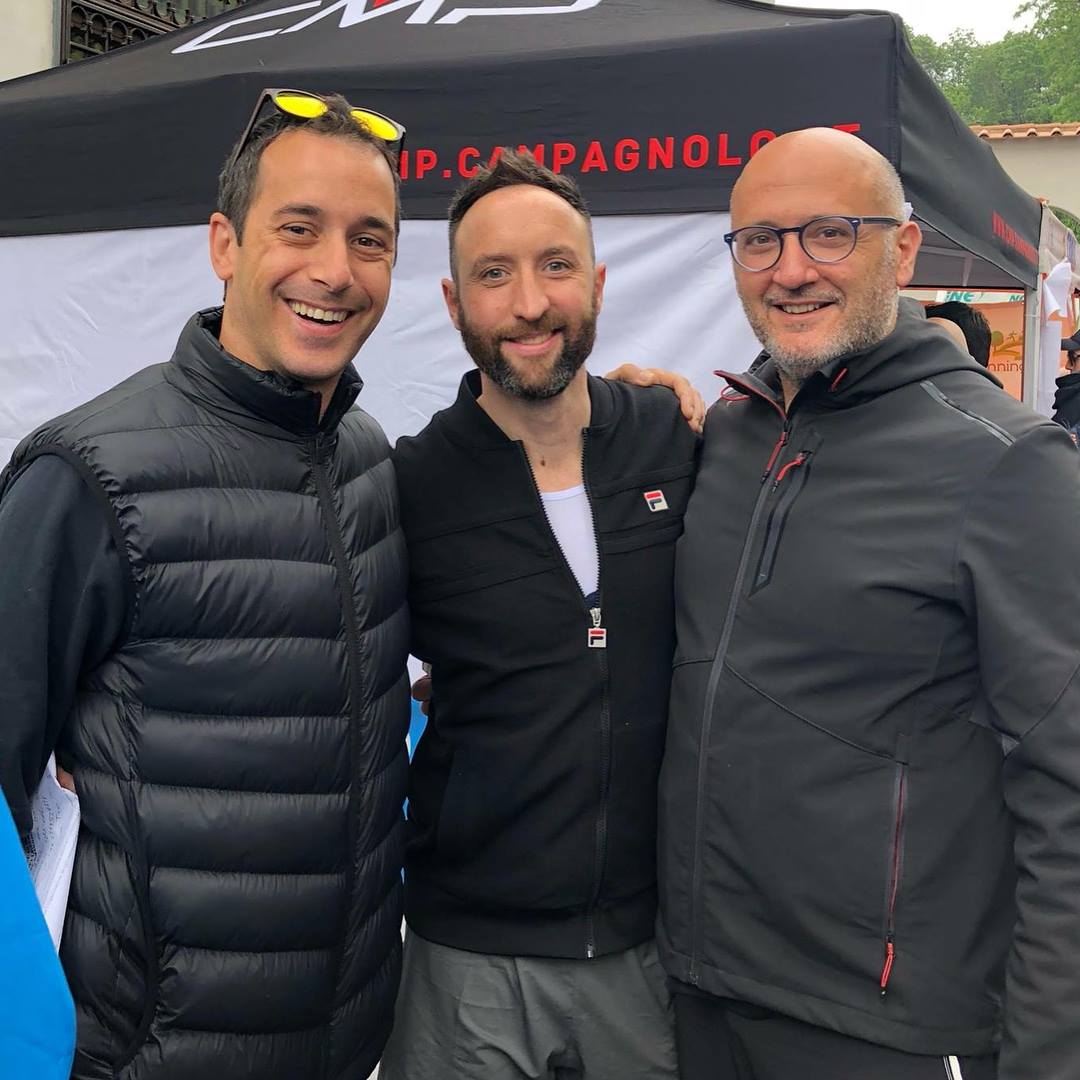 Fellow CVFR club & GBR trail runner Holly Page had the kind of fortnight most athletes can only dream of – with two cracking races. 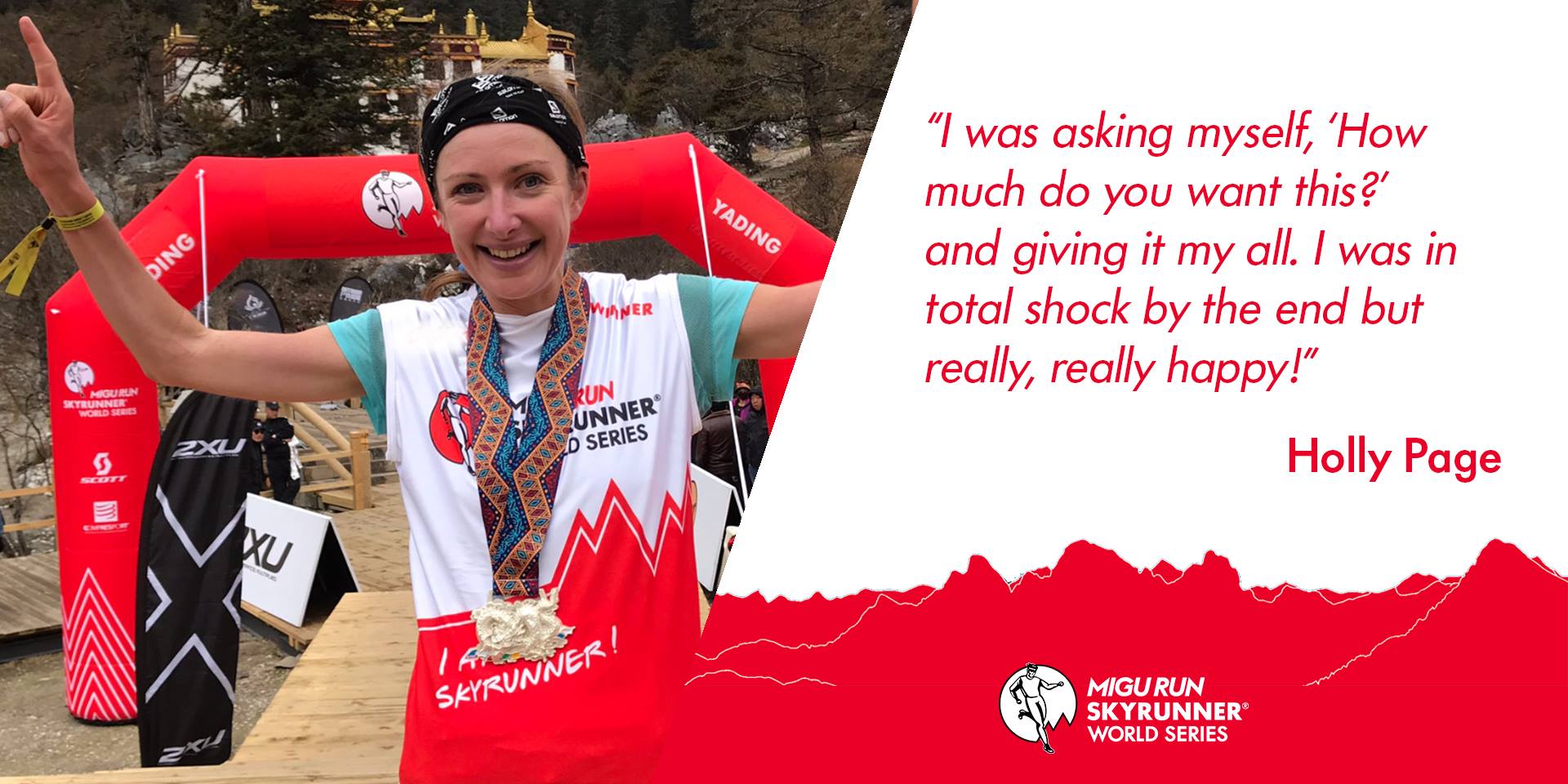 First, on 30th April she took the Sky Classic women’s throne, finishing first in the 55-mile Yading Sky Run in the Migu Run Summer World Series in China – and this despite food poisoning & travel nightmares. Initially lacking in confidence about the largely uphill (16000ft climb) course, Holly ‘went out hard from the gun’, giving it her all in freezing blizzard conditions to finish in an astounding 3h 32 minutes & four seconds (only 1.5 minutes in front of fellow GBR runner Ruthie Crofty).

Next, & less than two weeks later, despite admitting feeling ‘petrified’ when first called up to wear GB colours in January, Holly stormed the 2018 Trail World Championships Penyagolosa ultra trail race to finish ninth after the eye-watering 85km (25km longer than she had ever run before), and 5,000m/ of hills in the Spanish heat.

Holly was quick to express gratitude to those who came out to support the ultra runners, who she reported helped her through some of the toughest moments on the course. She is now starting to accept that rather than a ‘jolly jogger’, she really can ‘mix it with some of the fastest women in the world’, who until recently she would ‘never in a million years’ have thought she would be swapping positions with throughout the race. With only weeks before the Zegama trail race at the end of May, Holly is definitely one to watch. 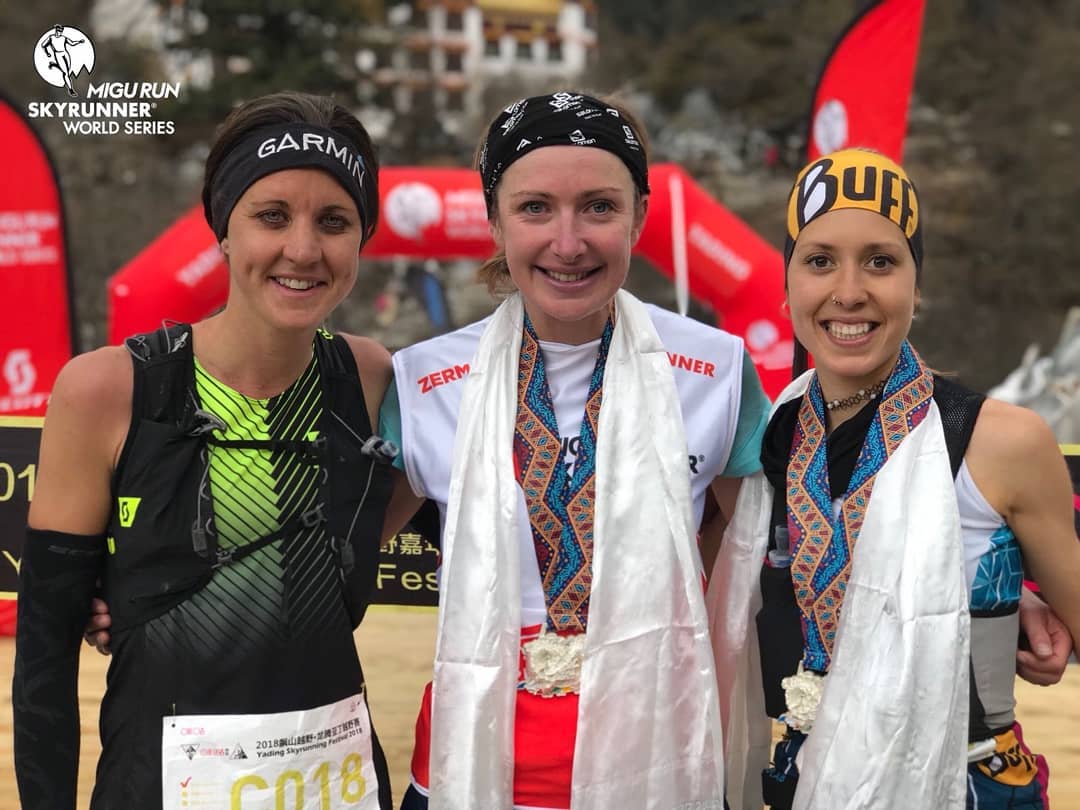 Rising to the Challenge:

Closer to home, & ‘in homage to Holly’, CVFR Club President, Bill Johnson ran his own trail race from Sedbergh on Sunday 13th May. The Howgills 26 goes from the most southerly point of the Howgills on a high-level route over Winder and The Calf to the very north of the Howgills, then returns south on lower-level, across undulating trails.

At the start of this marathon, on the initial, hilliest section, despite the heat, Bill was in touch with the leaders, in 6th place at the top of the first peak Winder out of 212 runners. However, as the going got faster, the top runners pulled away and by the halfway point, Bill had dropped back to a nonetheless respectable 13th place. He subsequently fought hard to retain this position all the way back south and to cross the finish line, not only 13th overall but second in the V50 category at 4 hours and 29 minutes.

Fellow V50 CVFR club member, Jonathan Emberton completed a solo Joss Naylor Lakeland Challenge on Saturday 12th May. The route from Ullswater to Wastwater was set by fell legend Joss Naylor as a challenge for Vet 50+ runners, coving 70km, 30 summits, 5000m of climbing. Jonathan was ‘really chuffed’ that the hard work he had put into learning the route really well allowed him to run strongly all day, to stay on schedule & to finish the course within the 15-hour target for his age group. 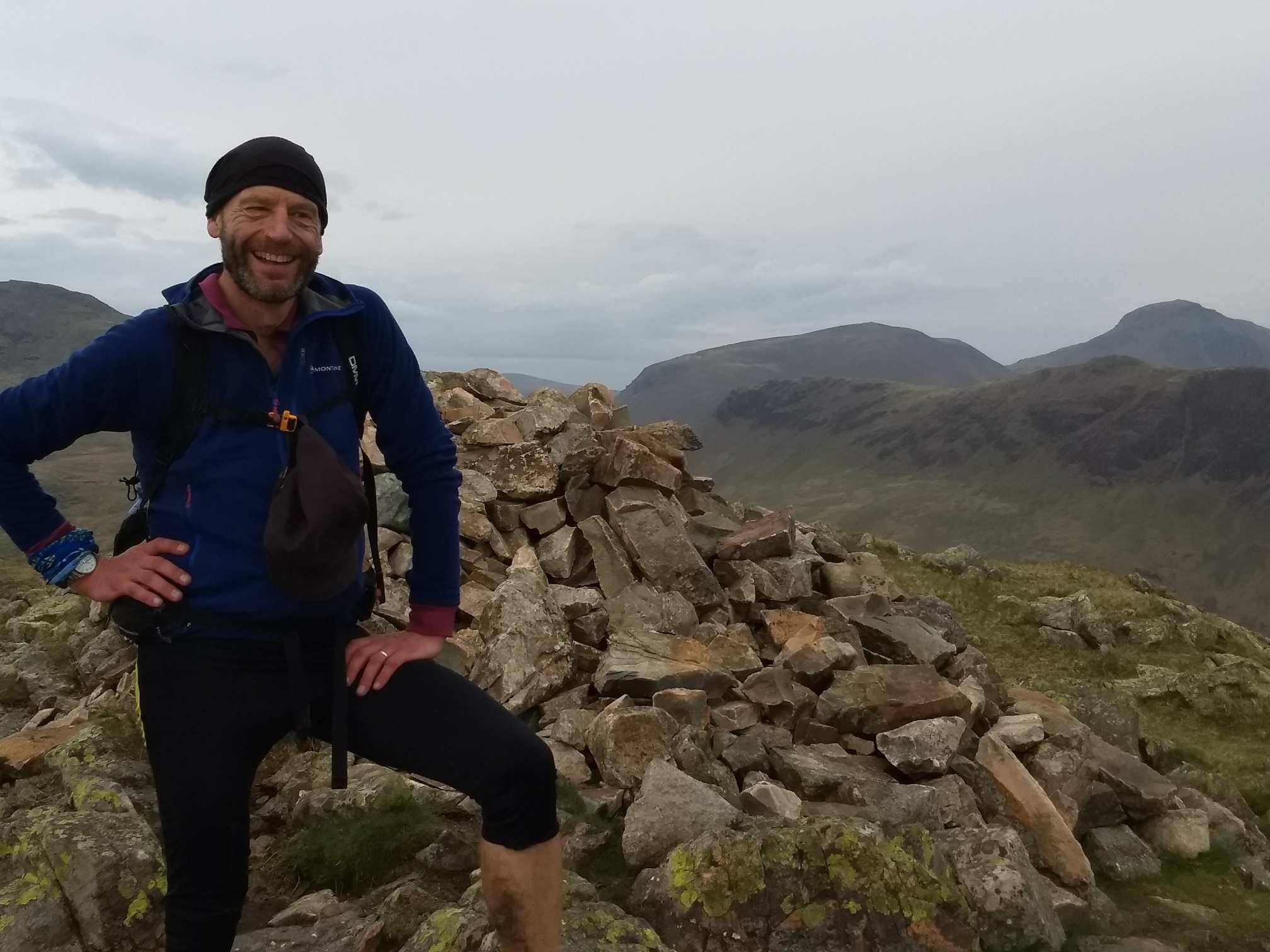 CVFR club members also completed two further major challenges in recent weeks. Six red & white hoops – Fellsman regular, Simon Bourne, and fellow CV runners Mike Clayton, Lee Shimwell, Stuart Russell, John Nunn and John Minta – took part in the 56th ‘Fellsman’, with its 61 miles & 11,000ft of climb, on an untypical sunny day weekend at the end of April. This overnight race, superbly organised by local scouts who man the checkpoints and put on hot food, starts in ingleton and finishes in Threshfield (near Grassington), covering some of the Dales best scenery. Lee Shimwell recalls that it was ‘looking forward to what was on offer next’ from the Scouts that got him round the route, especially into the night ‘when it got very cold and misty making navigation a real challenge’.

More recently, CVFR’s Jason ‘Wilf Williams, having run at a high level in fell running for several years, felt it was time ‘to try something different’, so took part in the National Duathlon championships at Clumber park in Mansfield this last weekend. Finishing an impressive 3rd in the 40-44 age group, in only his second Dualthon this year, Williams is delighted to have achieved his aim of securing qualification to represent GB for his age group in the World champs in Denmark in July. 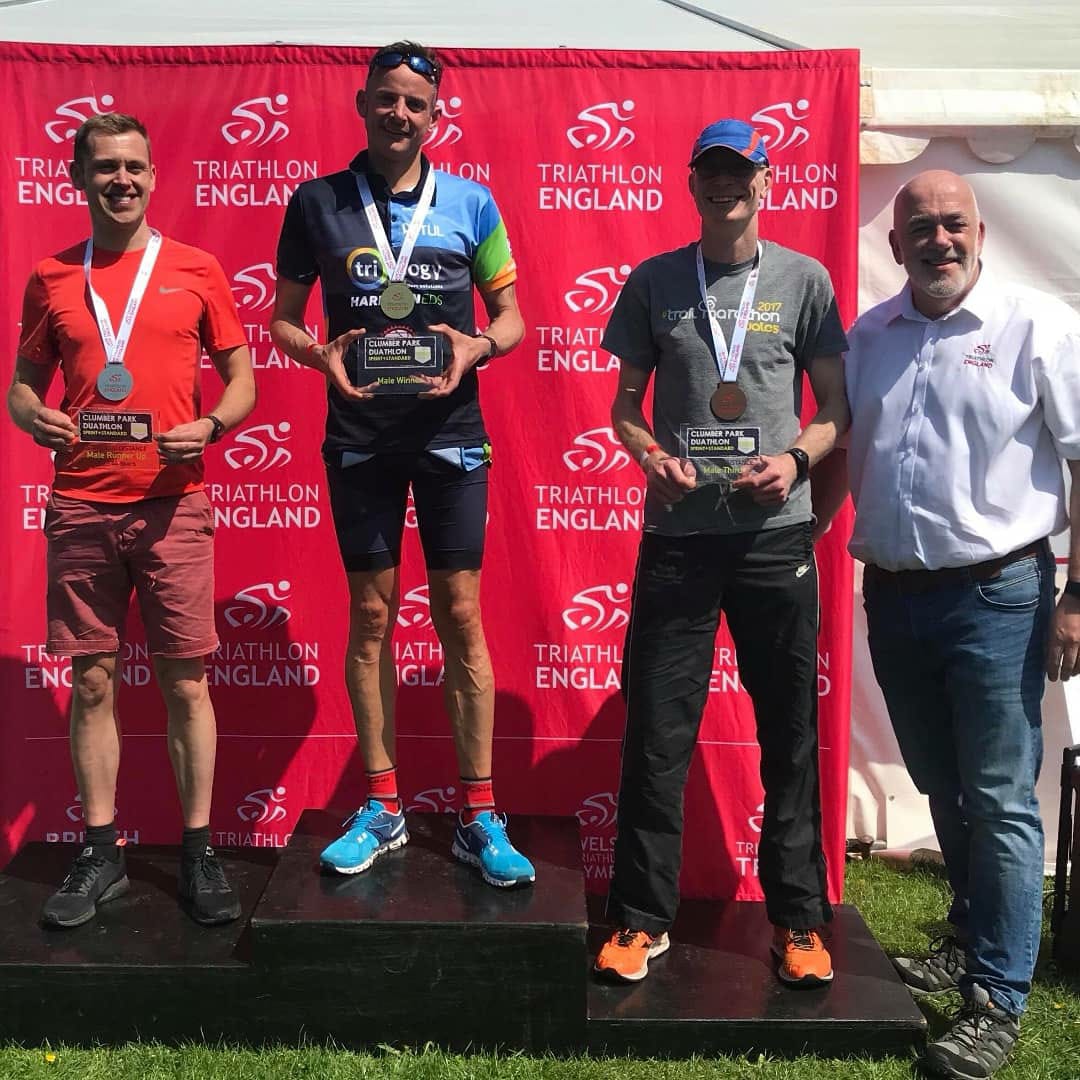 Jason ‘Wilf’ Williams on the Podium (in the cap)

And not forgetting the fells!

Darren Kay was the first CVFR home, finishing the x miles in 1:24:59, to take overall 7th place & third in the M40 category. The next closest CVFR runner was Mark Burton (39th overall & 14th M40). For the ladies, a strong race by Catherine Holden saw her the first red & white hoop over the line, finishing in the first 15 women (& 6th V40), to take, with fellow V40 runner Christina Turner & V50 Karon Foster the team prize for third ladies. Particular mention should go to Christina Turner who ran her best fell race ever & Stella Chrisanthou for her best race this year. 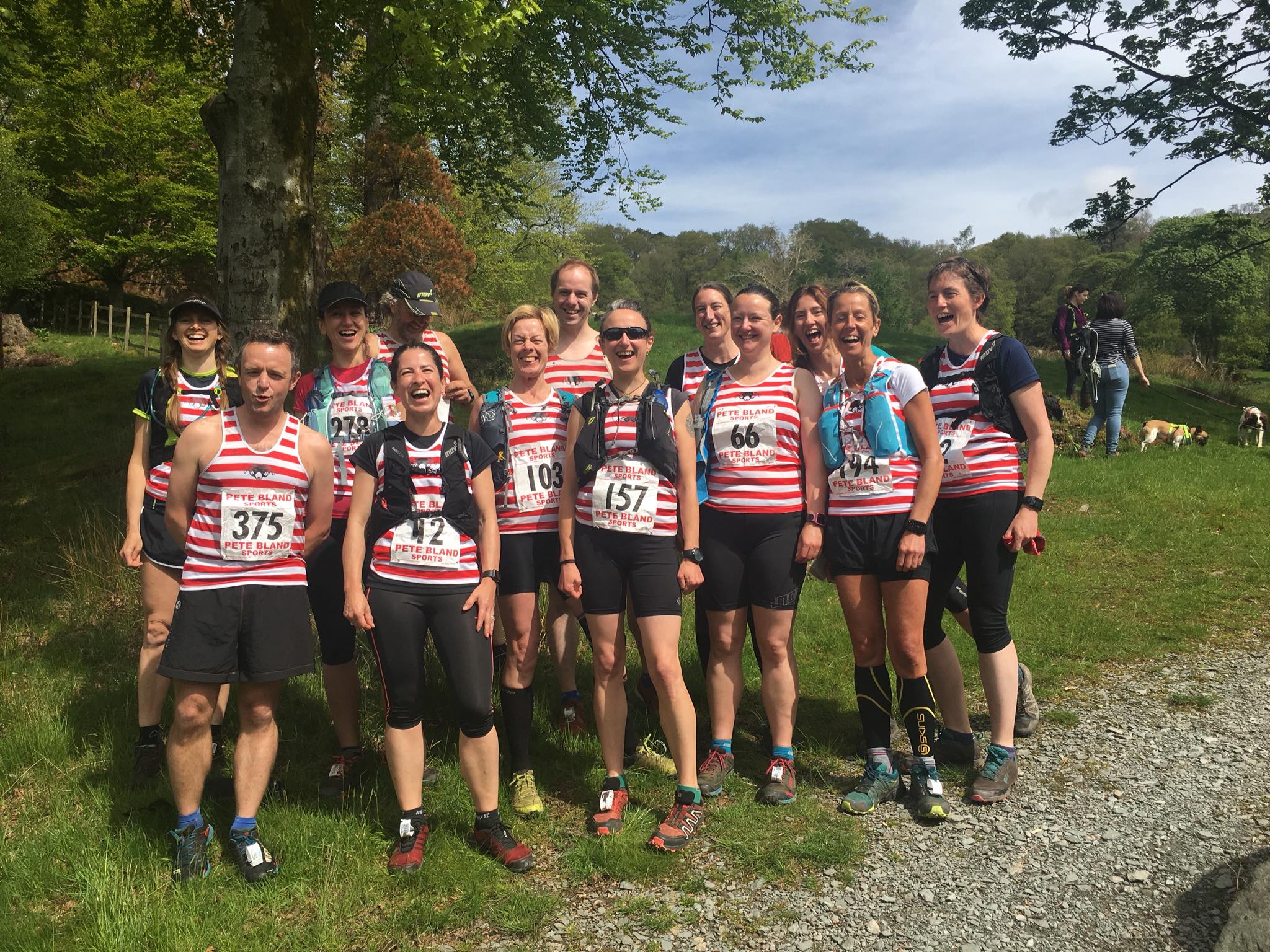 Former ladies’ captain Helen Buchan showed she is definitely back to winning form again, as she & Carole Fryer competed in the Pinhaw fell race on the evening of Friday 11th May. This five mile route with 700ft of ascent, is the second race in the 33rd Pendle + Burnley Grand Prix. Both CVFR ladies ran strongly, with Helen Buchan finishing 13th woman overall & claiming 3rd place in the W40 category & Carole Fryer winning 1st place in the W50 category, placing 17th woman overall. 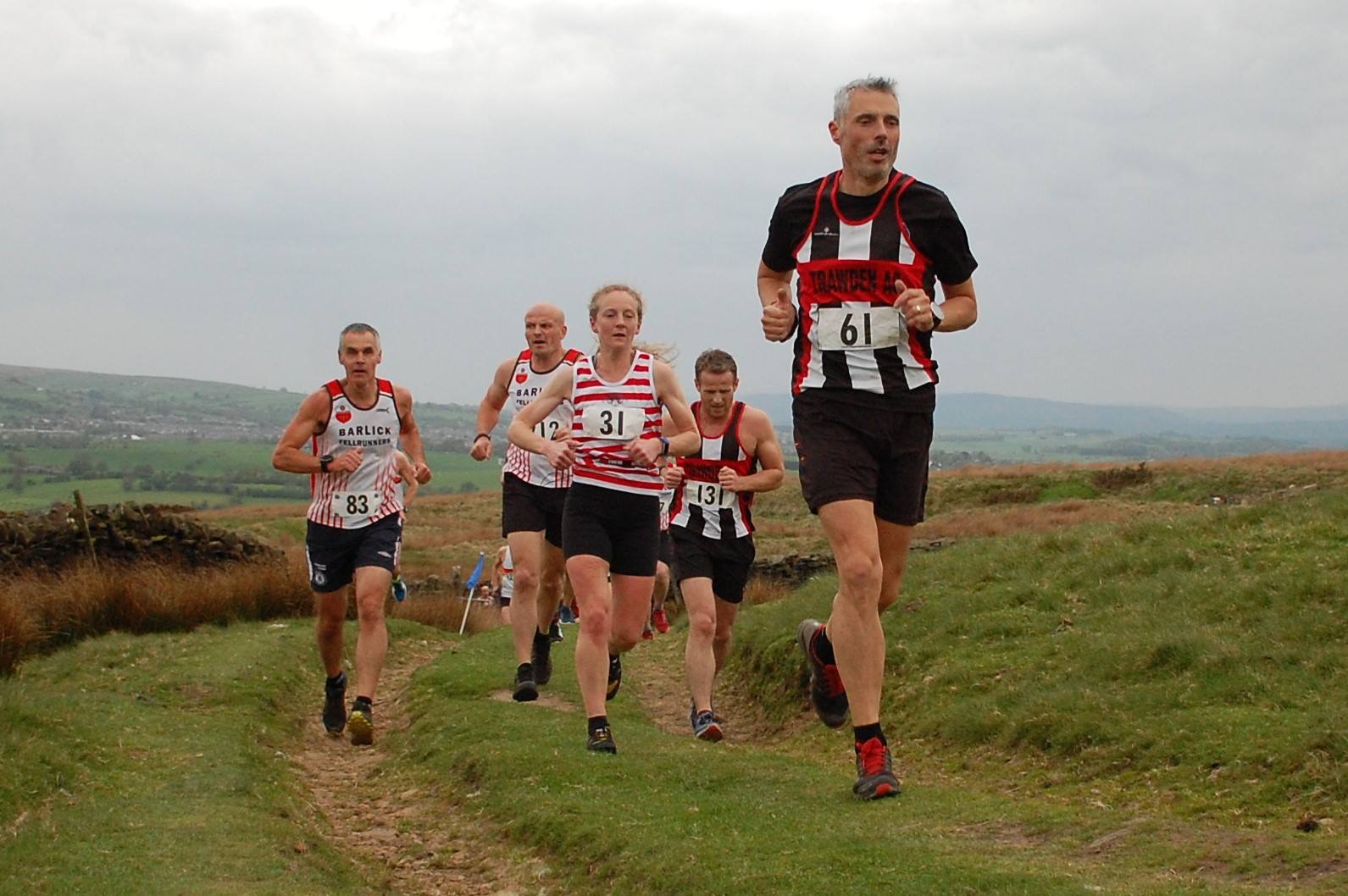 With so many club members racing in the Lakes, it was down to Calvin Fergerson to fly the flag for CVFR at the Pendle Clough fell race on Saturday 12th. This challenging 14-mile course, starts flagged across fields, but once on the moor, leaves runners free to navigate their own route to the nine check-points they must visit in order, running through 7 of Pendle’s Cloughs, across high, rough and, on occasion trackless, moorland terrain, and includes steep ascents and descents with loose stones, mud, peat and rough grass and dead bracken thrown in for good measure, before the final two-mile downhill race to the finish. Calvin finished his race in 3h 17 minutes & 29 seconds, coming a respectable 52nd overall and in the top 10 in the men’s open age category.

Finally, Sunday, 13th was the day of the Kirklee’s 10km Challenge – a friendly, well-organised event run by the church, which featured chip timing for the first time this year and the beautiful weather saw competitors in high spirits. Calder Valley’s Blair Garrett was pleased to finish 29th out of 239 runners in a respectable 46 minutes & 22 seconds.