Last Saturday, the red and white hoops could be spotted in Northern Ireland, across Calderdale and in Lancashire as CV runners across all ages successfully competed in a number of events. 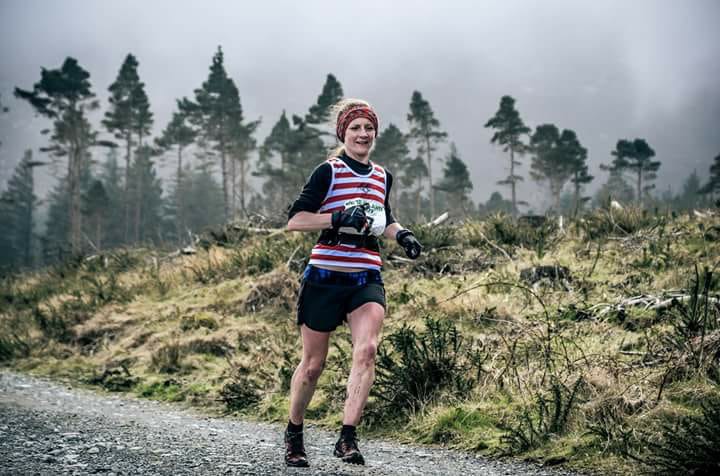 A grey misty day greeted 283 runners, including 11 CV, at the start line of the Mourne Highline race in N Ireland. A British Championships 2018 contender, this gruelling 10 mile race took competitors on a magical mystery tour of the Kingdom of Mourne, taking in grassy climbs, rocky descents, and airy ridges. Visibility remained poor throughout the day and competitors battled against strong wind as they picked their way between checkpoints. Attracting a strong field, CV proved their worth with the ageless Karl Grey taking first V40, V45 and 5th overall. Matthew Roberts was 4th overall with 01:36:56 closely followed by Karl and then Andy Swift in 6th. With Ben Mounsey fourth CVFR and Gavin Mulholland fifth CVFR, they scooped both the open and the MV40 team prizes. Helen Buchan, the former ladies captain, was 5th FV40, making an impressive come back after time out from injury. 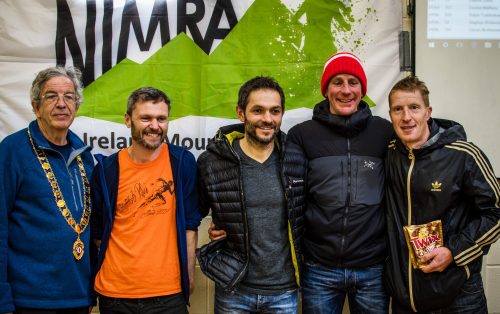 Nearer home, last Saturday saw the 2nd event in CVFR’s Ultra Championships in the form of Calderdale Hike. Organised as a long distance walk by 24th St Paul’s Scout group but also open to runners, this event offers 2 options- the ‘short’ route of a mere 22 miles or the longer option, this year being 40 miles to commemorate the events 40th anniversary. Starting and finishing at Sowerby Cricket Club, the longer version takes in both sides of the valley going as far as Todmorden and Lydgate before heading back via Bridestones, Peckett Well and Jerusalem Farm. Previously, men have outnumbered women at such events and the club’s Ultra Championships have rarely proved popular with the lasses. But Saturday was a turning point with 7 CV women at the start line, all of whom successfully finished too. 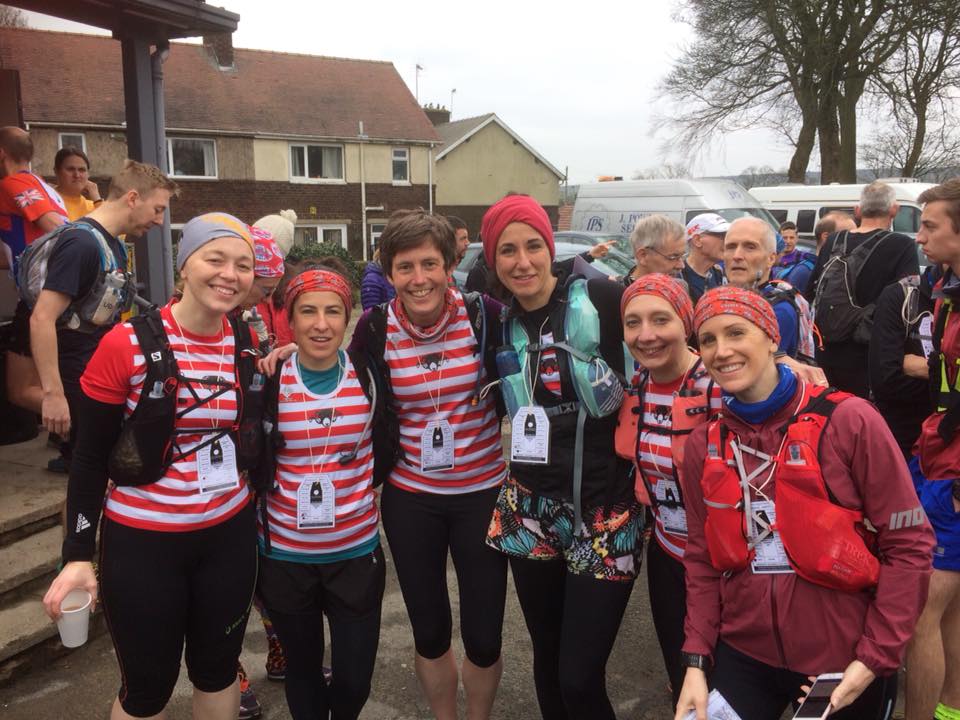 Said Kate Pope, a recent convert to Ultra running: ‘I ran with Gloria and Gill. We are all Ultra novices, although I’d trained hard and knew what we were up against. We had a great time. We all had our low points and hit the wall at different stages (thankfully!) but we had each other to get us through those bits. None of us could imagine doing something like this alone! We weren’t able to recce the route before and ended up running just over 41 miles. We were quite relieved to see the finish!’ 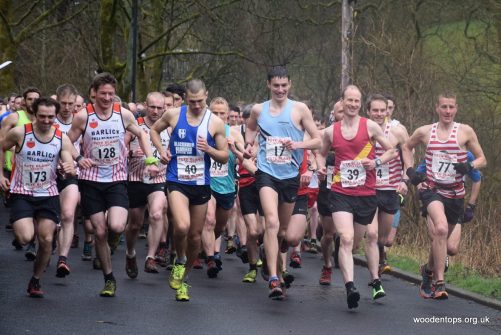 Over this last weekend, CVFR club members also ran well in Pendle, Wardle and Coledale Horseshoe in the Lake District. At Pendle, despite very wet conditions underfoot and a strong field – due to this race featuring in the Lancashire Championships – CVFR’s Alex Whittem and Shaun Godsman competed strongly to finish 6th and 7th overall respectively. Other notable individual results include Calvin Ferguson in 53rd and Blair Garrett 108th place. At Wardle, Mark Burton navigated warmer than expected conditions and a fast & slippery seven-mile (1250ft climb) to place 3rd overall and first V40 man. V50 runner Stephen Smithies was the first CVFR over the line at Coledale Horseshoe race, placing 70th overall out of 365 runners. Strong individual performances included Mike Clayton who finished 85th and Tamsin Cooke, the only female club member running in this weekend’s fell races, who finished in just over 2h 47 minutes.

Also in the Lake District this weekend, two further CVFR runners braved the elements to compete with 80-odd other runners braving the wind, snow and low-hanging clouds to slog their way up, onto and over Harrison Stickle, with all 2100ft of climbing in a 1 ¾ miles. An infamously tough race, both club members made the check points just off the summit. Dave Hammond, came in 32nd overall and an impressive 5th in the V50 category and Mark Burton, finished just behind him at 39th overall and a respectable 10th V40. Vetran Dave Hammond’s was happy with this, his first race of the year, and part of his preparation towards the first race in this season’s BOFRA Championship on 1st race in May at Sebough. Thanks go to all the marshals’ that had to stay up on the hill to ensure all runners passed through safely and to the Achille Ratti Climbing Club for a great event.

In the longer runs category, on Saturday, 7th April CVFR’s Melvyn Ward ran twice as far as ever before, completing the gruelling 61 miles (100km) of the kielder ultra trail in Northumberland (two loops of kielder water with a mixture of forest tracks, open moors and packed walking/biking trails), finishing this epic race in around 14 hours. Although at one point, worn down with understandable exhaustion in the swirling mist, he described feeling as if he was in something akin to the set of the Blair Witch Project and towards the end he would have ‘swaped his kit for a hug and some soup’, he concluded that overall despite the boggy, wet and cold conditions, ‘it was great fun’. On a serious note, the experience has given him an even greater respect for the talented club members who knock out long distances in record fast times. 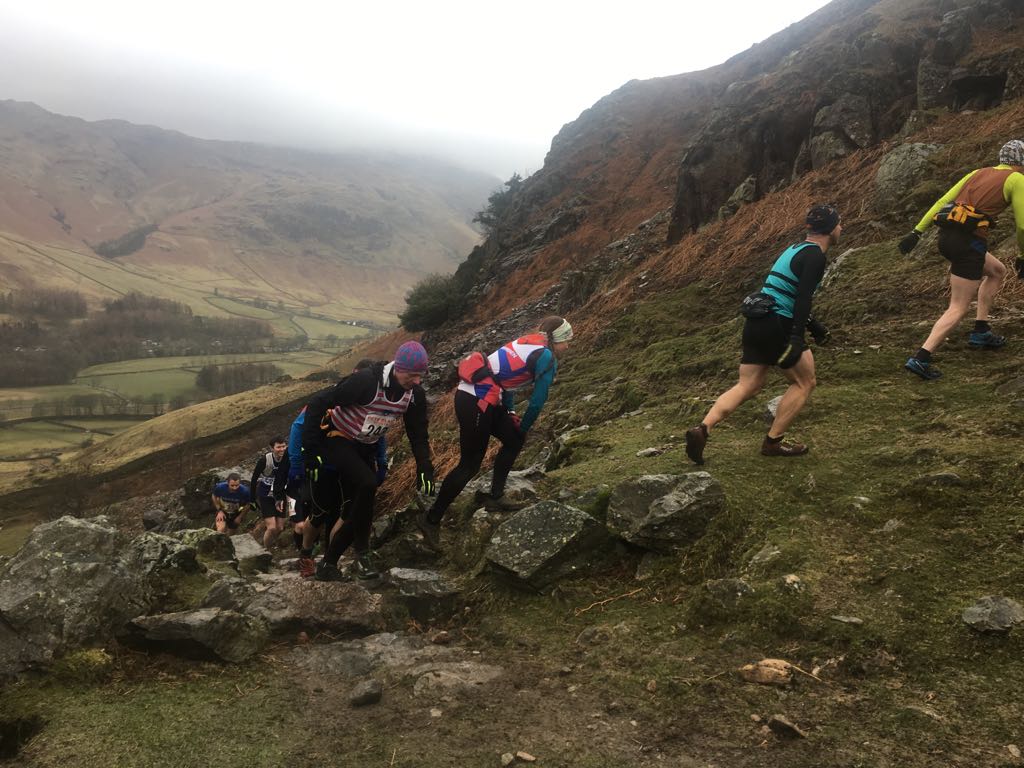 CVFR’s Melvyn Ward ran twice as far as ever before

On the topic of the club’s experienced long-distance runners, several of these were racing even further away from home this weekend. On Sunday, 8th April, CVFR and Great Britain runner Holly Page was invited to join two Polish runners on the Salomon Sunnto team and complete the 30km first leg of a three-leg 73km Sztafeta Gorska relay in the spa village of Kudowa (a race crossing from South West Poland into the Czech Republic). Holly competed in style, finishing the fastest lady and overall 6th and her team coming 7th overall and 1st ladies. 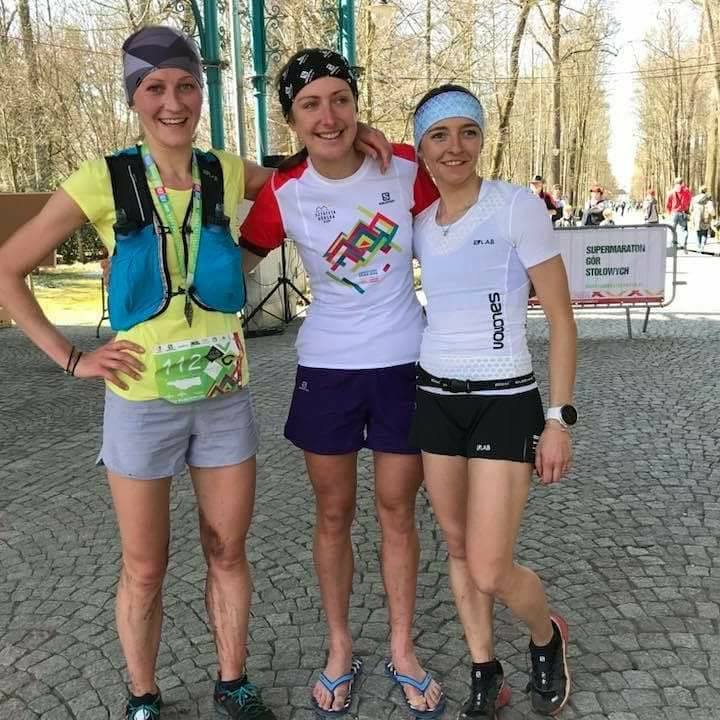 At the tough Endurancelife Coastal Trail Series race in Exmoor on Saturday 7th April, CVFR’s Ian Symington claimed 3rd place in the Ultra Marathon in an amazing 5h 17 :25 seconds for the 32.8 miles and 6,415ft of ascent. It was also a fabulous result for red & white hoops MV45 runner Stephen Edwards, who outright won the marathon distance (and a pair of underpants as a prize!) in a thoroughly impressive 3 :54:50 (only just over 10 minutes off the overall record).7 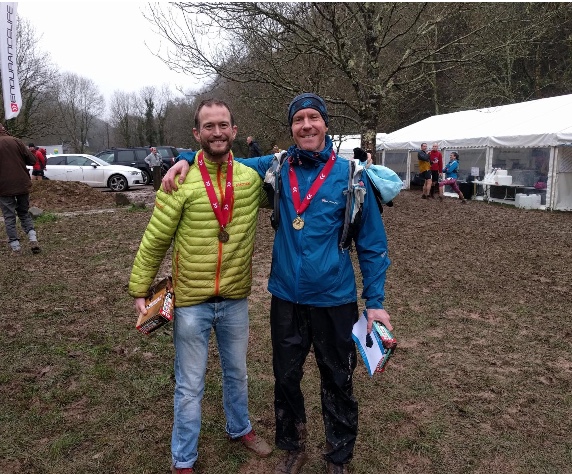 Also on winning form this weekend were CVFR’s Barbara Lonsdale and Alistair Morris who won the mixed pairs Open 5 Adventure Race at Grassington (an event in which competitors have five hours to orienteer their way to as many controls as possible featured on an OS map given to them at the beginning of the race). Fellow CVFR club members husband and wife team of Phil and Jackie Scarf came in third in the mixed pairs category and were crowned overall 12th Series Winners, having won the previous two events. 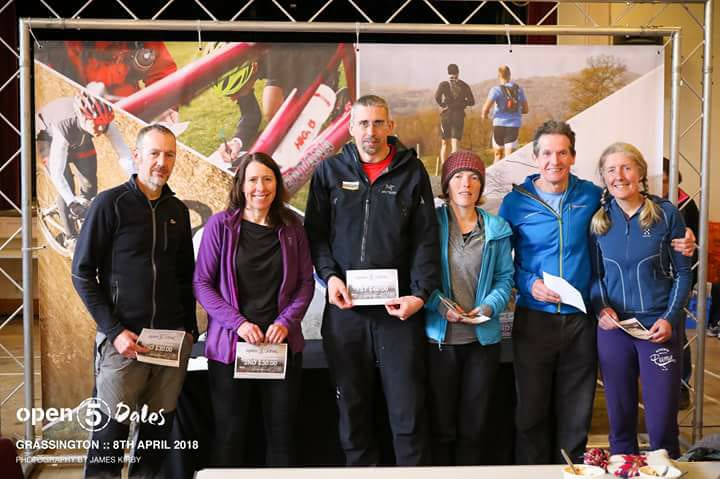 The top three mixed pairs for the series based on their two best results.

On the mini fells the Bunny runs at 3 miles of fast running over Penistone country park in Haworth is a perfect sampler for the newbies and the old. GB athlete Jack Wood won but Calder Valleys youth was in abundance with James Duffy first back for club. 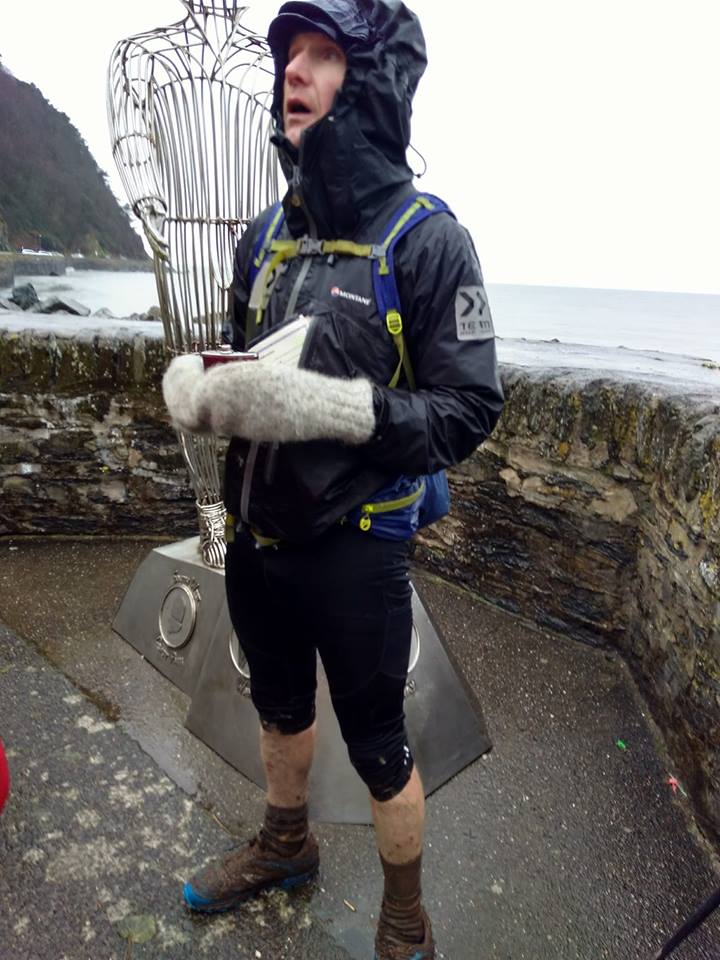 On the contrary, super vet shuffler Phil Scarf completed the non-stop endurance 110 mile Devon coast to coast in 35hours which is 34hrs out of my comfort zone. Jackie Scarf his wife, managed 85 miles before retiring due to injury. Phil and Jackie have been noticeably off the streets of Hebden since.

Blair Garrett was back in action racing at Rivington on Saturday. Calvin Ferguson, Stuart Russell & Mike Clayton raced at Howgills beast on Friday

And finally great news for the clubs Coiners race in May which has been rightly chosen as the selection race for the WMRA International Youth Cup team in Italy.  Coiners: Monday 7th May

At the longer end of medium length fell races (if you know what I mean) Doctor’s Gate is a 12 mile fell race that heads out of Old Glossop along the packhorse trail known as Doctor’s Gate.  It was the second race in this year’s Calder Valley club championship so many red and white hoops were on display last Sunday.

From Doctors Gate the route heads north to Shelf Moor before a sadistic drop back to Doctors Gate and an immediate climb back up to James Thorn.  The rung out runners then head back to Old Glossop via Dog Rock.  With nearly 3000ft of climbing it is a proper tough race.

The race was won by Josh Williams and Nicky Spinks.  Calder’s Simon Fisher found the going tough, his legs falling off on the cliff climb where he was passed by his team mate Amanda Farrell.  However the consensus seemed to be that it was a really enjoyable route.

A rescheduled race, cancelled last week as heavy snow had blocked access roads, gave a great turn out of 116 runners (after only announcing the go ahead 4 days previously) ;last Sunday.

This year’s race was a vintage edition for atmosphere and spirit – plus the most fantastic weather for fell racing.  The organisers were really grateful to those who rallied round to salvage the race after the disappointment of last week.

The race was won by Joe Baxter of Pudsey & Bramley one to watch for the 3 Peaks, he ran strongly right to the end.  Closely Follwed by Jack Wood of Ilkely and Sam Watson of Wharfdale in 3rd.  Todmorden’s Annie Roberts was the women’s winner, despite a second place the previous day at Boulsworth.

Those Calder Runners who hadn’t headed over to Glossop were lead home by Ultra Expert Kevin Hoult in 9th place in 2:15:043 shortly followed by Iain Illstone in 2:17:39 and 12th . and Paul Haigh in 19th.  Gloria Ayuso was first woman back for Calder in 3:13:34. 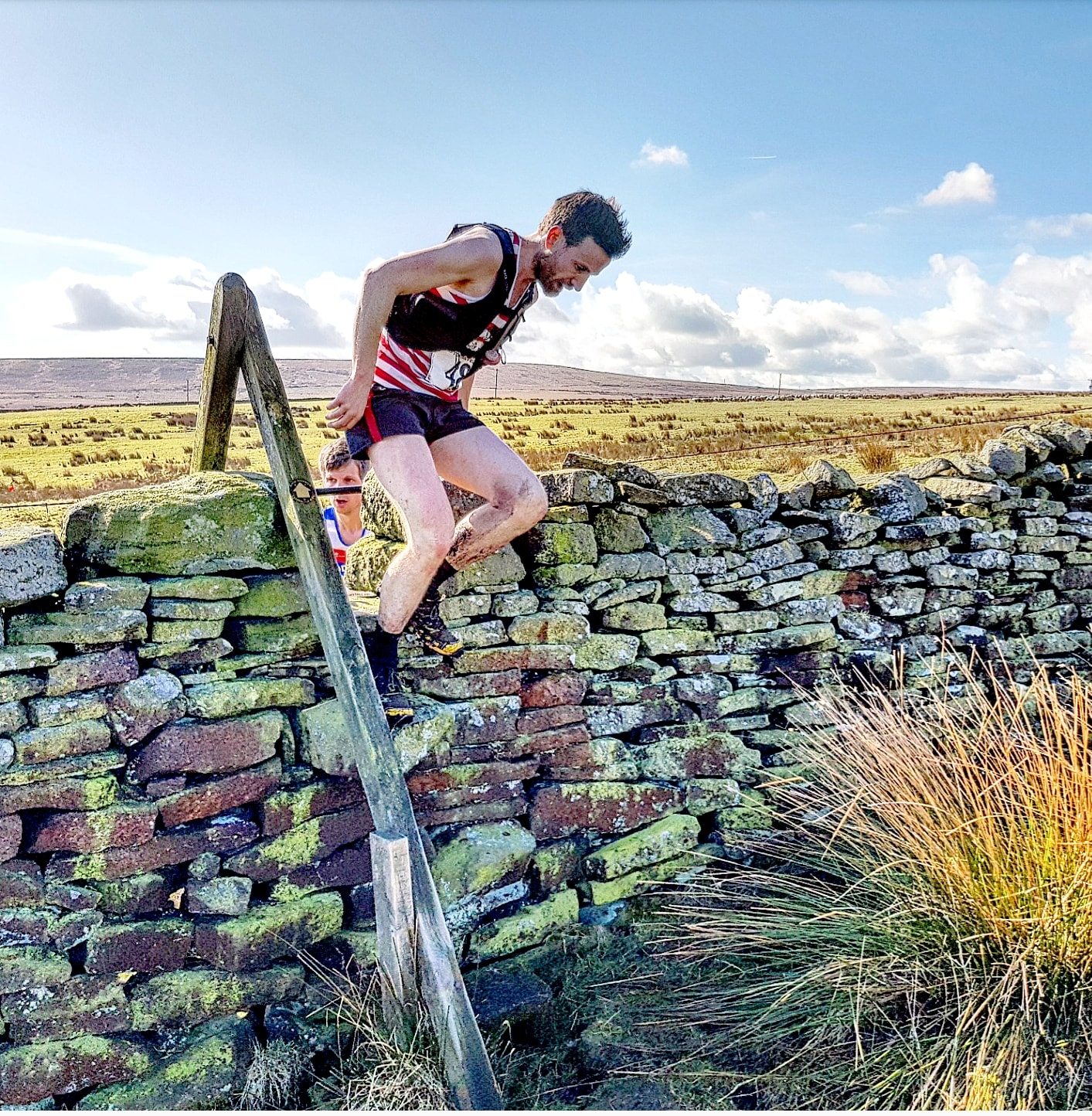 Big thanks went to Mythomroyd Scouts who managed to cover 7 check points despite losing half their volunteers due to the postponement. Also helping were the teams from Calder Valley Search and Rescue Team, RAYNET, and Heptonstall Church.

The event was supported by Slightly Foxed (Cask of Ale / Race Numbers), SIS Science in Sport- (Free Bars Gels and Nutrition Pack Prizes), The Bakehouse (bread), Hebden Bridge Picture House (Tickets and Prizes), Sportsshoes.com (Vouchers).  Thanks to The Cross Inn and Heptonstall Museum for providing venues and hospitality – plus all the landowners

Starting from Wycoller Aisled Barn, this race heads south east along Wycoller track, joining up with the Pennine Bridleway, taking in a loop of Boulsworth Hill before heading back to the Village via Turnhole Clough.  Racing on Saturday, Calder’s Mark Taylor was 4th from a field of 77 and Barbra Lonsdale was 43rd and 3rd woman. 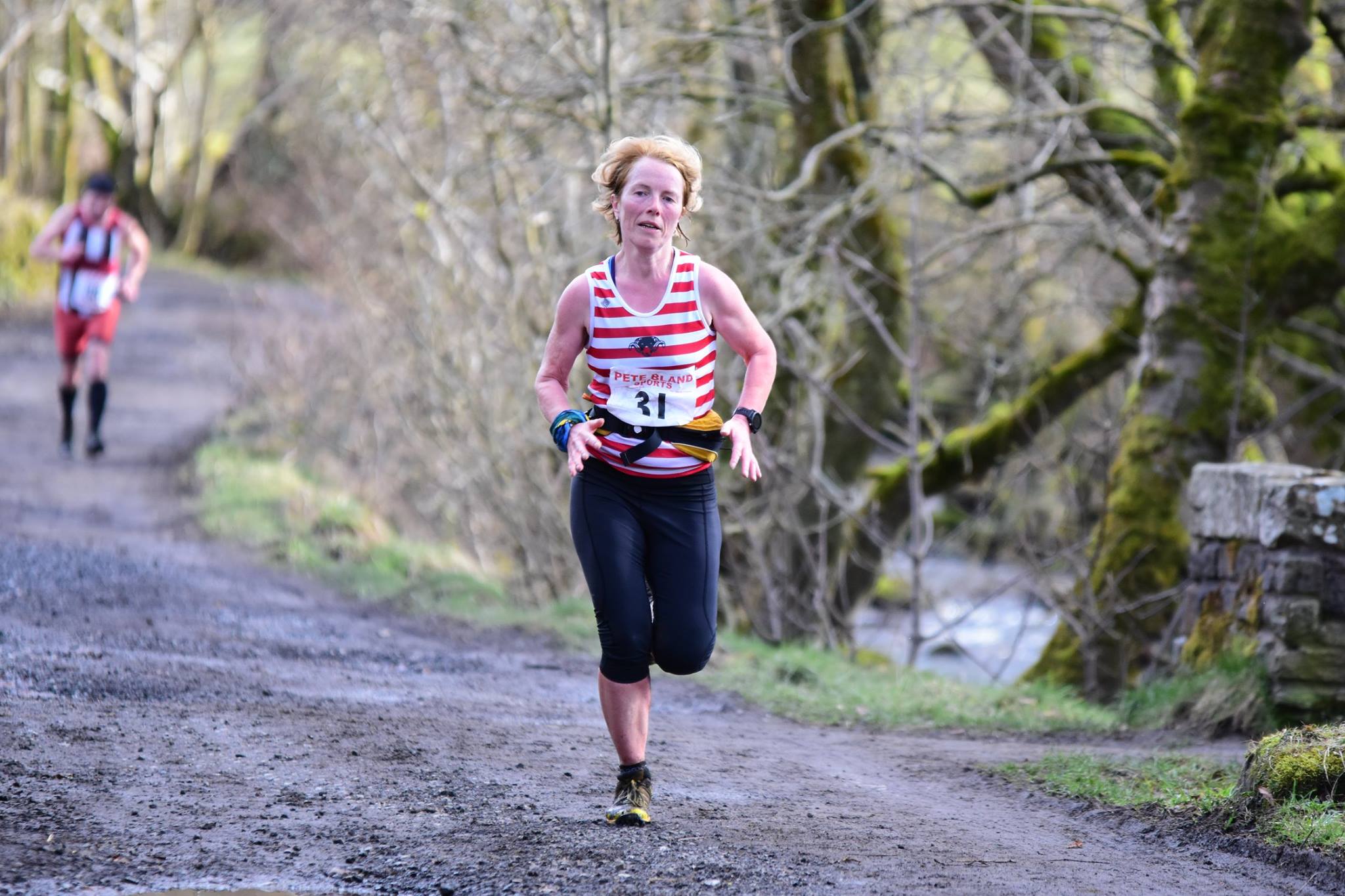