Firstly, in England, Halifax Harriers hosted the 33rd Eric North Memorial Calderdale Way Relay, with 96 teams entering. Covering a total distance of 50 miles, each team of 12 runners share the duties as each of the 6 legs are run in pairs throughout the day. CVFR men’s Team A took home 1st place in a combined time 05:59:55, beating their closest rivals, Barlick Fell Runners by just over 4 minutes.

The men’s B team also had a very strong and consistent run thanks to a superb start by Iain Powell and Iain Glendinning, finishing in 25th place and beating many other clubs A teams.

Ben Mounsey, who was drafted in at the last second to run Leg 3, in addition to Leg 1 had this to say “Unfortunately for the CVFR A team, Darren Kay pulled out of the race with an injury less than 36 hours before the event. After frantically trying to find an adequate replacement over the weekend, we finally made a decision (literally a few hours before the relay!) that we would move Richard Pattinson to Leg 6 and I would run both Leg 1 and Leg 3. A very risky and bold strategy that would either pay dividends or fail quite spectacularly. When the race began, I knew that we would need a remarkable run on leg 1 to give us a healthy lead, especially as we expected to lose time on leg 3. Thankfully, both myself and Andy represented Yorkshire last weekend, so I knew we were in excellent form. By the time we approached Norland Moor we had a sizeable lead over the chasing pack and a good 45 second advantage. Over the first few miles I really pushed the pace to try and extend our lead and seconds quickly turned into minutes. Behind us there was a real tussle for 2nd place as Wharfedale, Harrogate and Clayton fought it out between themselves. I knew that once we reached Mill Bank our tactics had worked and it was just a case of how many minutes advantage we would have going into the second leg. We finished with a real flourish on the final descent, in a time of 01:09:47 and gained a 4 minute lead over the next teams, Harrogate Harriers and Wharfedale Harriers in 2nd & 3rd respectively.”

The men’s Team A were then able to hold onto the lead for the remainder of the race, with Shaun Godsman putting in a really strong push on Leg 3, having recently returned from a serious back operation. Jon Smith and Mark O’Connor also put in an excellent Leg 5, as Barlick were chasing and closing the gap. Lastly Karl Gray and Richard Pattinson, as two of the most experienced fell runners in the country proved, there was no catching these legends, finishing comfortably in 1st place. 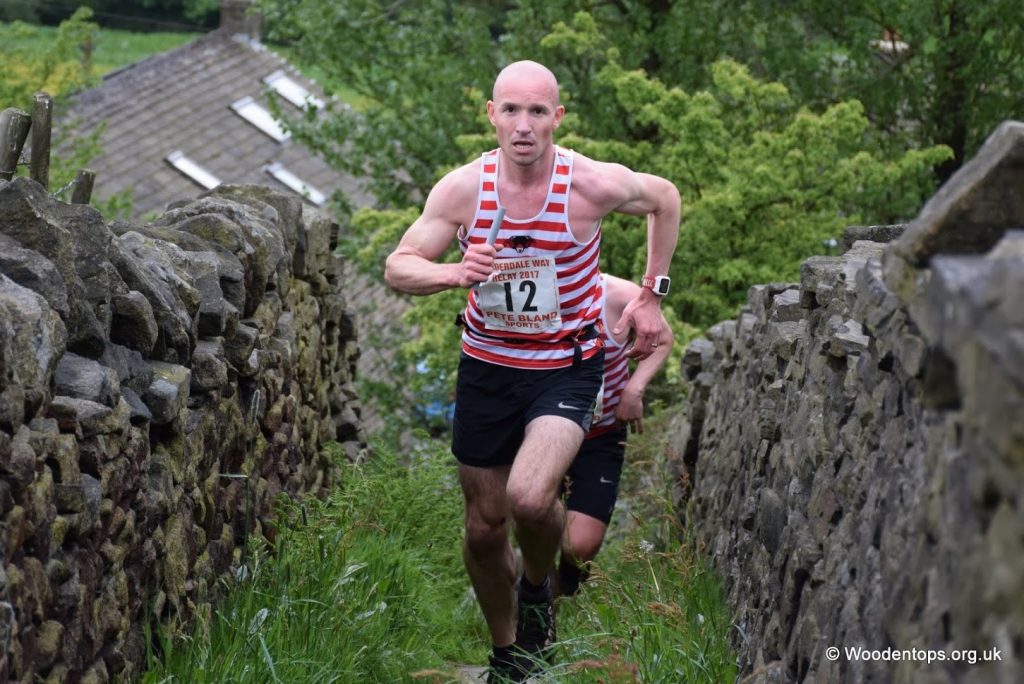 In Scotland, Holly Page took first place at the Goatfell race on the Isle of Arran. The 9.6 mile race heads out from Brodick, taking the competitors 2,800 ft up the Tourist route, before descending and heading back into Brodick for a fast finish. Likewise in Wales, Math Roberts came home first for CV in the Cader Idris Mountain Race in a time of 01:24:08, beating his closest rival by 6 minutes. The race is one of the toughest in Wales and is considered one of the ‘must do’ races on a lot of folk’s calendars. 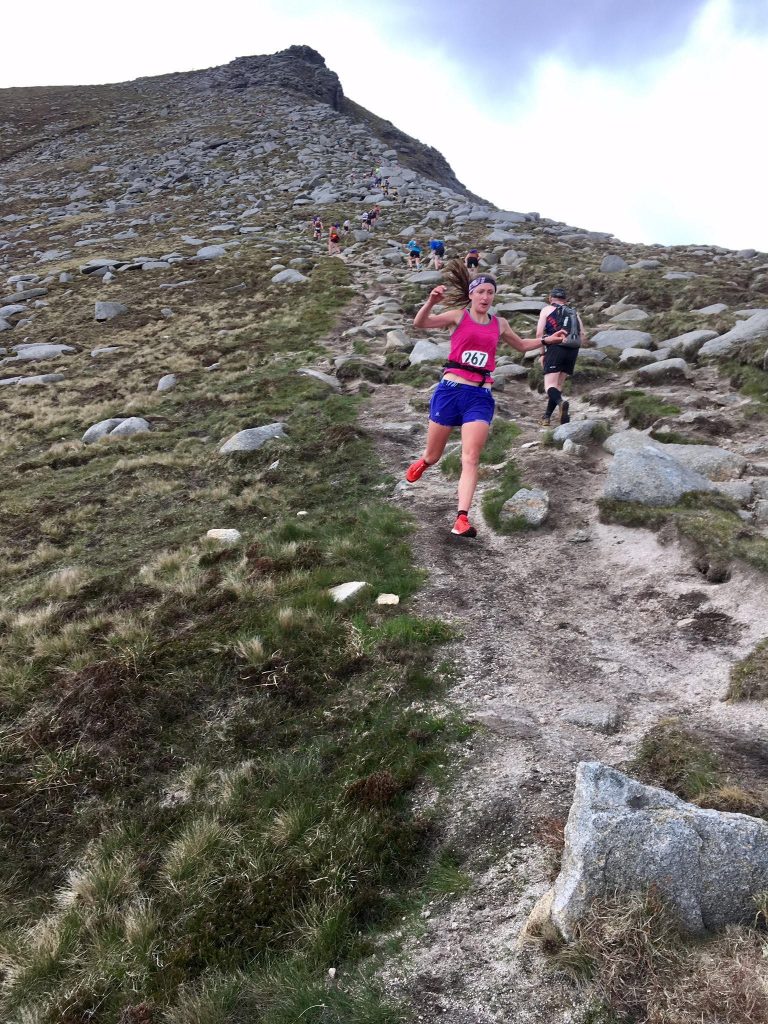 At 37 miles and incorporating 10,000 ft of ascent and descent, the Old County Tops race is a classic test of mountain running endurance that has been held annually for 29 years. From Langdale the competitors must visit the highest points in each of the three counties that used to incorporate the Lake District before the county of Cumbria was formed – Cumberland, Westmorland and Lancashire. The highest points being the summits of Helvellyn, Scafell Pike and Old Man of Coniston respectively. This year the test was made considerably harder by heavy rain, wind and cold conditions all morning. The 30% dropout rate during the race, even from the hardy mountain folk who toe the start line of an event like this, was indication of the severity.

Elite ultra runners Kevin Hoult and Simon Bourne were targeting a win in their vets category. They set a fast time of just over 8 hours for 7th place overall, but were pipped for the vets win by just two minutes. Further back, there was a good tussle between two more CVFR pairs: Johnnie Watson and Simon Fisher stayed just a few minutes ahead of Helen Buchan and Bill Johnson for almost the whole route, until a navigation error led to Johnnie and Simon heading to Dow Crag instead of Coniston Old Man, allowing Helen and Bill to emerge at the final summit in front – a position they held to the finish. Those two pairs both finished in just over 10 hours.They were followed by CVFR’s Tim Brooks who had paired up with Todmorden Harrier’s Andy McFie.

The race was won by Rob Jebb (Bingley) and Josh Jardine (Helm Hill) in under 7 hours, while Nicky Spinks (Dark Peak) and Jean Brown (Clayton) impressively lowered their own women’s record to 8:15 despite the conditions. 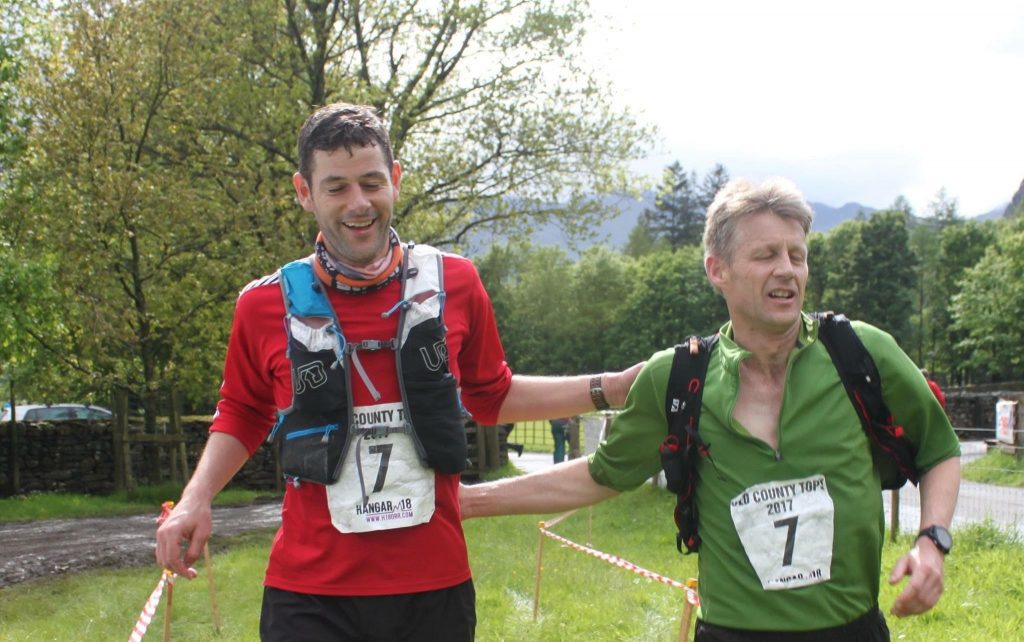 Lastly, just over the border in Lancashire, a group of hardy CVFR entered the Blackstone Edge fell race, as part of the clubs Championship series. From the old Roman road, the race heads down through a boggy track before climbing very steeply over rough tussocks – 1,200 ft in total – to the Trig point at Blackstone edge. It then drops down a technical decent and once more through the bogs, for a fast finish. Lindsey Oldfield took first ladies prize for the club and Bill Johnson took 1st Vet 50, as well as being first back for CV. This result extends his lead even further in the men’s Club Champs – come on lads, he needs a challenger!

CVFRs Stephen Edwards took part in the Jurassic Coast ultra on Saturday 20th May and won the race. It was 46 miles with 6112’ of climbing visiting the famous site of Durdle Door, Lulworth Cove and Kimmeridge.