The Bunny Runs are a series of weekly spring fell races held at Penistone Hill above Haworth. Bunny Run Two was held on the 11th of April. Three speedy laps of the quarry giving a three mile route with about 300ft of climbing mean that juniors 12 years and over can race against the adults. Always fast and furious races they suit the shorter distance specialists. 800 metre track star Max Wharton was out to win this weeks race for his fell club, Calder Valley.

However the win was not for Max, who came third in 15mins 35secs. The race was won clearly by James Hall of Wharfedale in 14:51, only ten seconds behind the course record. It was Hall’s third win at this race. Jack Wood of Ilkley just managed to hold off Wharton for 2nd in 15:22. 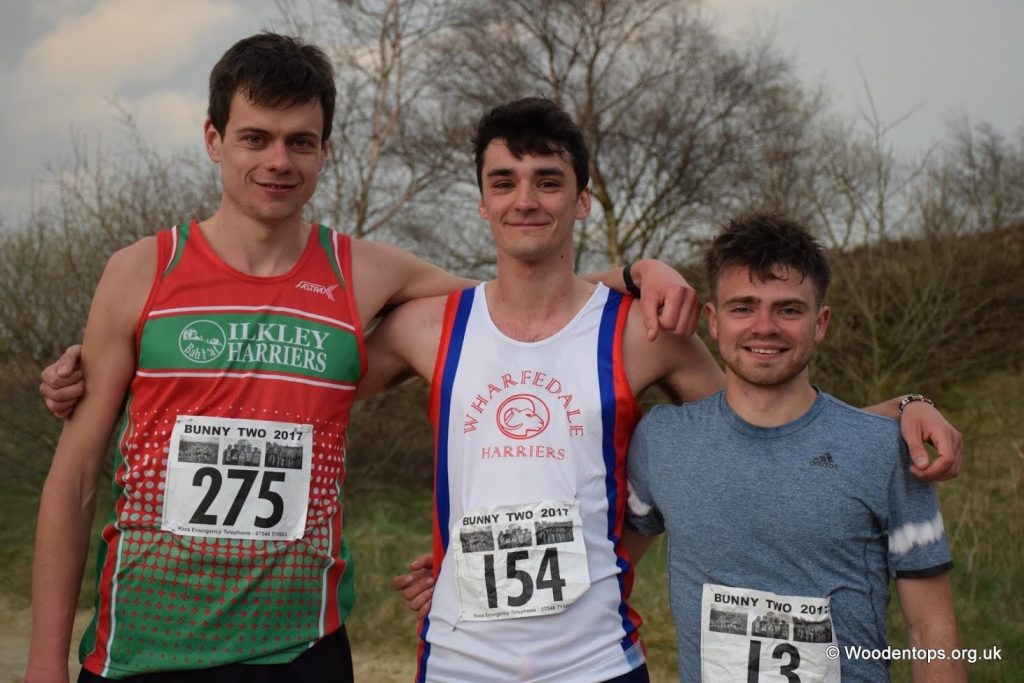 Max Wharton 3rd over all and 1st calder.

Always popular, perhaps because of the large range of chocolate based prizes, the next Bunny Run (number 3) is on the 18th April and the Bunny Run Relays are on the 25th April.

The legendary Rivington Pike Fell Race was held last Saturday. A couple of Calder Valley runners headed over into Lancashire. Dave Hammond was 91st in 23:32 and CalvinFerguson was 183rd in 26:50. 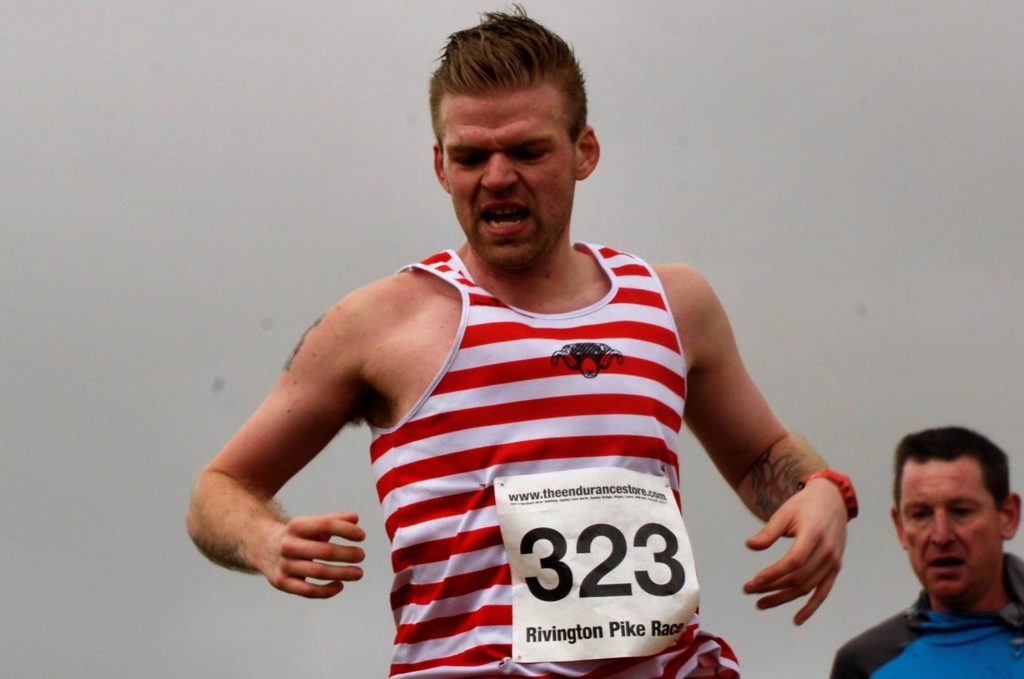 Calder Valley pair battle it out on the Hike

In an epic battle, Kevin Hoult and Ian Symington battled one another around the 37 mile Calderdale Hike, leading them to beat the course record and finish way ahead of the rest of the field.

The race takes competitors from the village of Sowerby around the hills of Ryburn, Littleborough and Calderdale. Covering 10 miles more than your average marathon, 6,000 feet of climbing and requiring navigation, speed and endurance, it’s a tough fell race. Part of the UK-wide ‘Runfurther’ series, it is a counter in the national competition for ultra-runners making this a well-attended, competitive race.
As former winners of the Runfurther series, both Kevin and Ian were firm favourites and they didn’t disappoint. They led the race the whole way around, battling one with one another. In the end it was Kevin who had the strength to win. He was able to pull away on the climbs leaving Ian had to claw his way back on the flat and downhill sections.
Kevin said the two of them ran together for the first thirteen miles, gradually getting a gap between them and the others. At that point, he says, “we decided on different routes across to Coolam and, dropping to the checkpoint, I could see Ian had about 20 seconds on me, but my legs felt fresher from my route choice.
“From here we pushed each other hard over to Todmorden up to Mount Cross then all the way to Cross Stones before climbing to Lumbutts – and never getting more than 30 seconds on each other. At Lumbutts I was quickly through the checkpoint hoping to get a short lead again and pushed hard all the way up London Road in the shadow of Stoodley Pike. Despite my efforts, Ian’s relentless pace kept the gap down and sure enough we were soon back together.
“One checkpoint left and I was starting to suffer and was now worried about being able to keep up. We hurtled down the hill to Mytholmroyd with one big climb left. I used my long legs to edge away from Ian and managed to extend the lead to a couple of minutes. I then gave everything I had left on the last two miles downhill to make sure Ian would have to work hard to catch me. After over 5 hours of racing, I finished exhausted but happy back at Sowerby, with Ian just behind.”
Kevin Hoult finished the race in 5 hours and 4 minutes, with Ian Symington 4 minutes behind. The third runner was John Bottomley who finished 40 minutes later in 5 hours 47 minutes. 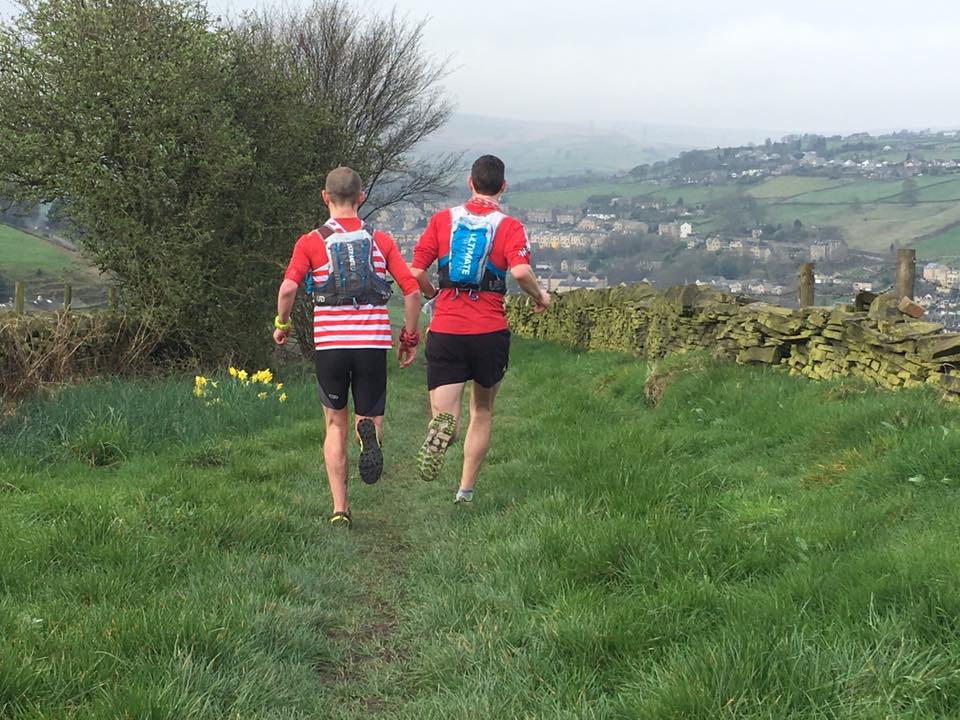 Krypton Kev and Super Symington on the Calderdale Hike 37m

Ten runners from Calder Valley Fell Runners travelled to Northern Ireland for the first in the British championships fell race series. With the fastest runners from across the country lined up at the starting line, this was going to be a fiercely competitive race.
The Donnard Challenge begins with a race along forest paths before beginning a long, leg destroying climb to the top of Slieve Donard and then straight back down a lengthy fast descent to the finish. With over 3,500 feet of climbing in just under 9 miles, it was a tough course designed to test the cream of the country’s fell runners.
Calder Valley’s new signing, Andy Swift, was first back for Calder Valley in 10th place in a shade under an hour. 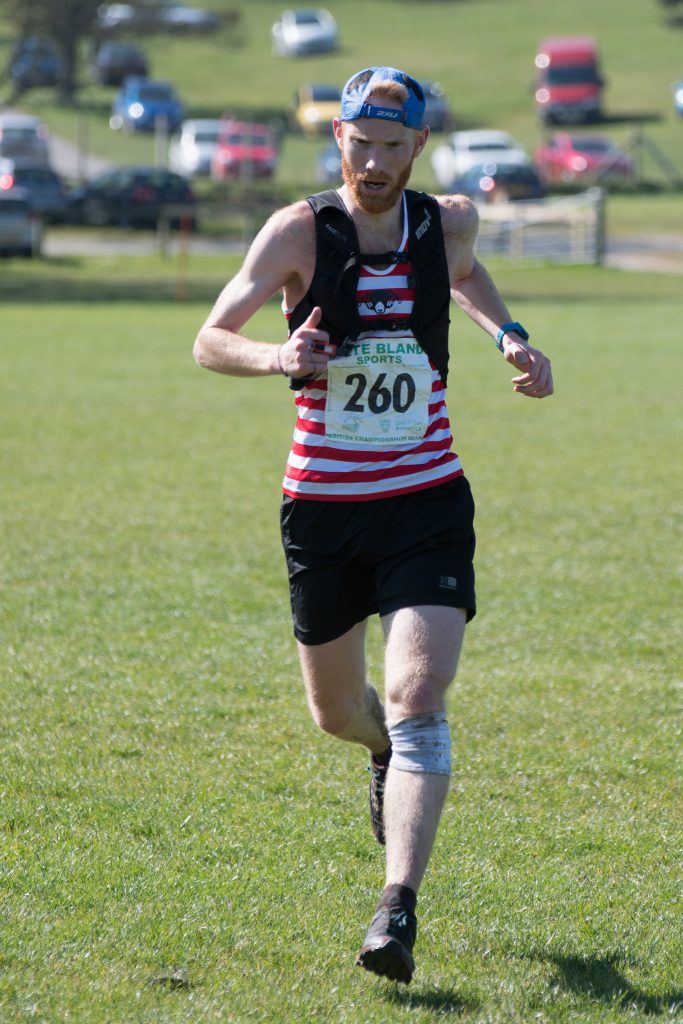 Andy Swift First back for CVFR at Donnard

Gavin Mulholland was next back just over two minutes later in 22nd, followed by Darren Kay, Tim Ellis and Mark Taylor.
Calder Valley’s Ben Mounsey, one of the UK’s fastest fell runners, was having a strong run and was in 8th place until he had a bad fall in the final mile. Ben was knocked out by his crash but was determined to finish and so walked to the finish line. Despite all this, he still managed to finish in 80th place.
Calder Valley won the third V40 team prize.

Both young and old of CVFR were out at the weekend getting plentiful supply of mud and smiles. The sun was out and the shorts and vests were on with juniors and seniors taking part in events that spanned 3 counties. And Calder Valley flags were flying with prominent performances by club members at all 3 events.

On Saturday, Holmfirth Harriers hosted the ever popular West Nab races over the South Pennine moors for both juniors and seniors. Based in the small town of Meltham in the heart of ‘Last of the Summer Wine’ country, all age groups gathered to enjoy a range of varied, challenging courses, with the U19 boys joined by senior athletes for their ascent of West Nab itself. The junior races, an English Junior Championship counter, goes up, down and along this valley in varying combinations for the different age groups, generally gentle until under 13. Above that, they that take in a steep slog straight up and down the valley side, but still with a long flat finish for the youngsters. The U19’s Boys/U23’s and seniors race, a mere 5.6miles but almost 1500ft of climb, saw CVFR’s Gavin Mulholland take second prize and Jo Buckley 3rd lady. 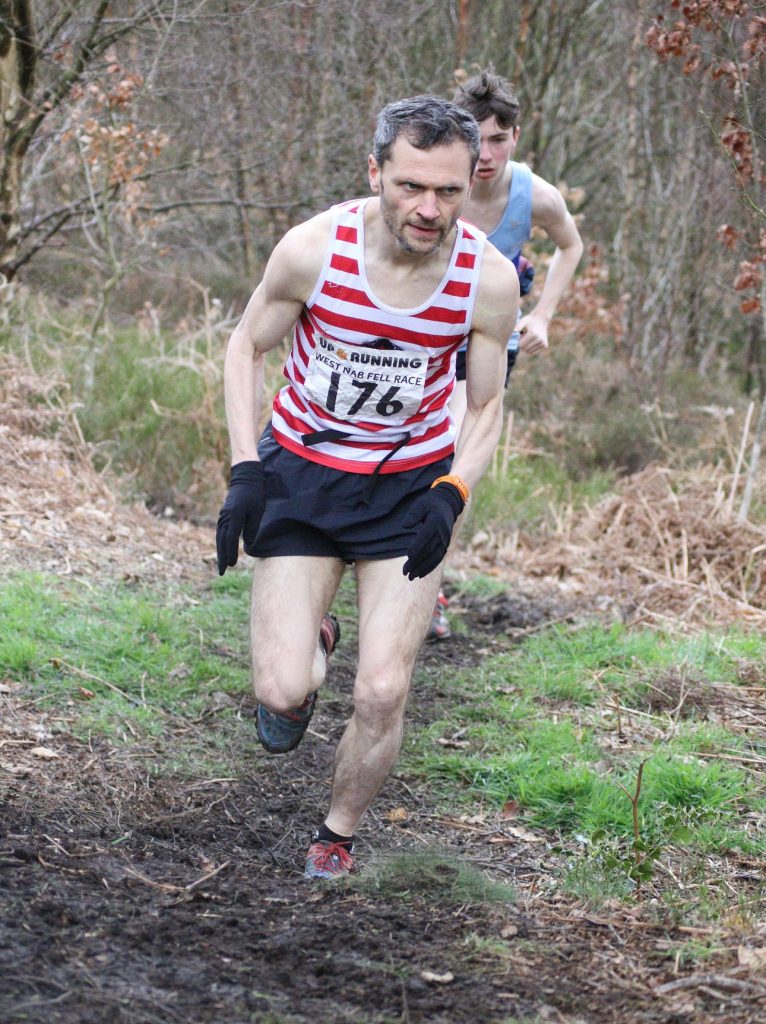 First in was Joe Dugdale (Cumberland Fell Runners) with Mike Fanning (Holmfirth Harriers) taking 3rd place.
Said Gavin ‘Looking for a race to keep me sharp for the British Championships I noticed West Nab which is right on my doorstep. The course was part of the Junior English champs and there was a vibrant atmosphere in the “start paddock”. After a quick briefing, the next thing I know I’m racing with the top U19s in the country! They all shot off high on testosterone but I managed to sneak into third and stayed there on the first section of technical loops, churned up from earlier races, causing grip issues compounded by short brutal climbs all along Royd edge’
‘Once the field was dizzy from doing loop the loops we eventually ascended up to Meltham moor with young Joe Dugdale(16!) sticking to a relentless pace unlike his peers. At West Nab trig the marshals could see I was having so much fun that I did an extra part loop before the fast return to the finish passing lots of ascending runners, full of support.This race is a must, with a well designed course and best value £1 I ever spent on post race treats in the hall.’
‘Best of all though is seeing the emerging talent fuelling the future of fell running 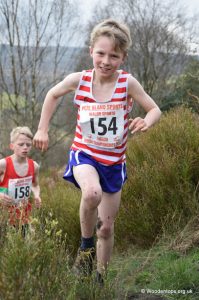 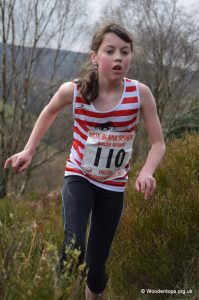 And CVFR is certainly bursting with emerging talent with impressive performances from the youngsters. Sam Annison was 3rd under 9, and Calder Valley dominated the first 10 places in the under 13s with William Hall 3rd, James Duffy 4th, Patric Casey 5th, Alex Duffield 6th and Joseph Hobbs 7th. The under 11s (Charlie Pickens, George McFie, Finley Canning, Fearne Hanson, Ben Hodgkinson, Ollie Pickens) really shone as did the under 15s Ruby McFie, Maya Brunt and Eilo Beesley, who overtook his rival from last season. There was good steady progress in the under 17s for Lucas Greenwood too. 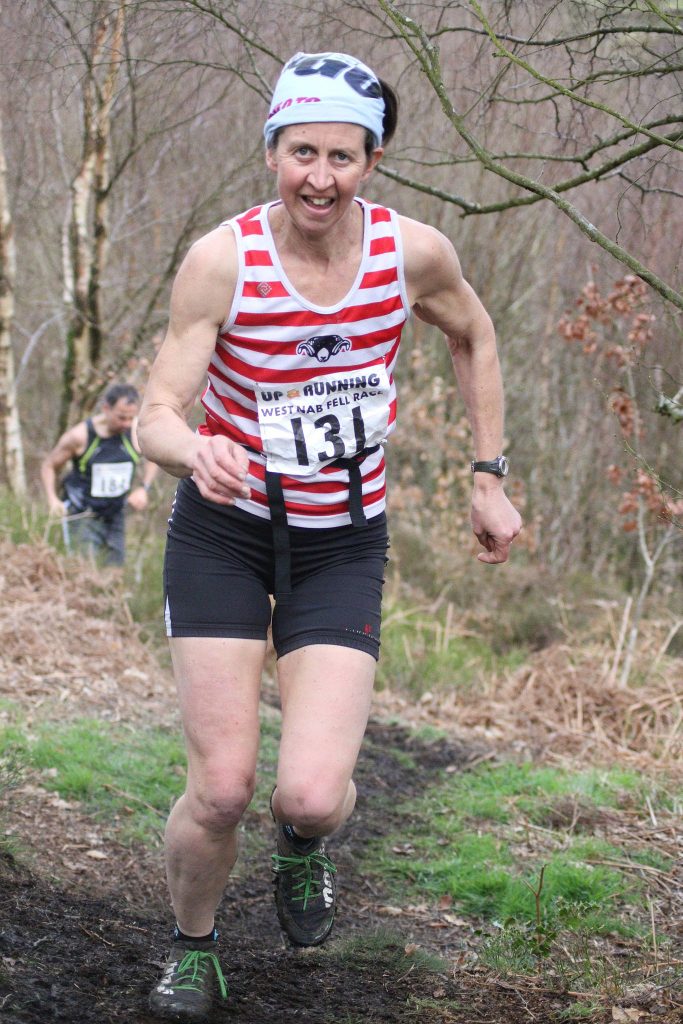 Further afield in Derbyshire, CVFR’s new recruit, Andy Swift took the winning trophy for Lads Leap, a short and hilly race of 5.9mile and almost 1700ft ascent around Glossop. Said Andy ‘I felt great from the off! Had a good tustle with a guy from Pudsey &Bramley until the climb up the quarry where I pulled away and held on to claim back the trophy I won in 2014, in a massive PB of 2 minutes to come home in 46:10! Bring on the British Champs!’

And on Sunday, nestled in the spectacular Cumbrian fells, taking in the superb views of Coniston Old Man, Banishead Quarry and Swirl How, was the second 2017 Kong Mini Marathon. Five determined CVFR took part in this epic 4 hour score event in which competitors are given a map showing the location of 25 controls in the mountains and have to visit as many as they can and get back to the start/finish within the 4 hour limit. It attracts a wide range of competitors, from those trying these events for the first time, to the national elite.

Steve Smithies disproved all those who mock his navigational abilities, and who use ‘Smithied’ as a euphemism for being irretrievably lost, by posting a superb score of 417, placing him 31st out of the 216 solo and paired competitors. Last month Steve had taken part in the FRA navigational training course to improve his skills, and three of his instructors from the course also took part in this mini mountain marathon. They will no doubt have been delighted that their student outscored all three of the instructors.

Gareth Clarke and Richard Sunderland rued missing a couple of controls on their run as a pair in the event, but still scored a fine 350 to place 57th. Slightly further back, Stephen Edwards clocked up 280 points, meaning that all the CVFR contingent were in the top half of the results.

The top CVFR scorer was whizz navigator Bill Johnson, who scored 445 for 22nd place overall, and second in his age category, MV50.Said Bill ‘I’ve been recovering from an injury inflicted on a duathlon a fortnight earlier. I was very cautious on slippery descents to avoid re-opening the wound, but apart from that I put it out of my mind and managed to complete a solid round.’

It will be interesting to see if Bill can consolidate his MV50 medal position over the next two events in this best-3-of-4 annual competition.

All photos courtesy of Woodentops: All from West Nab 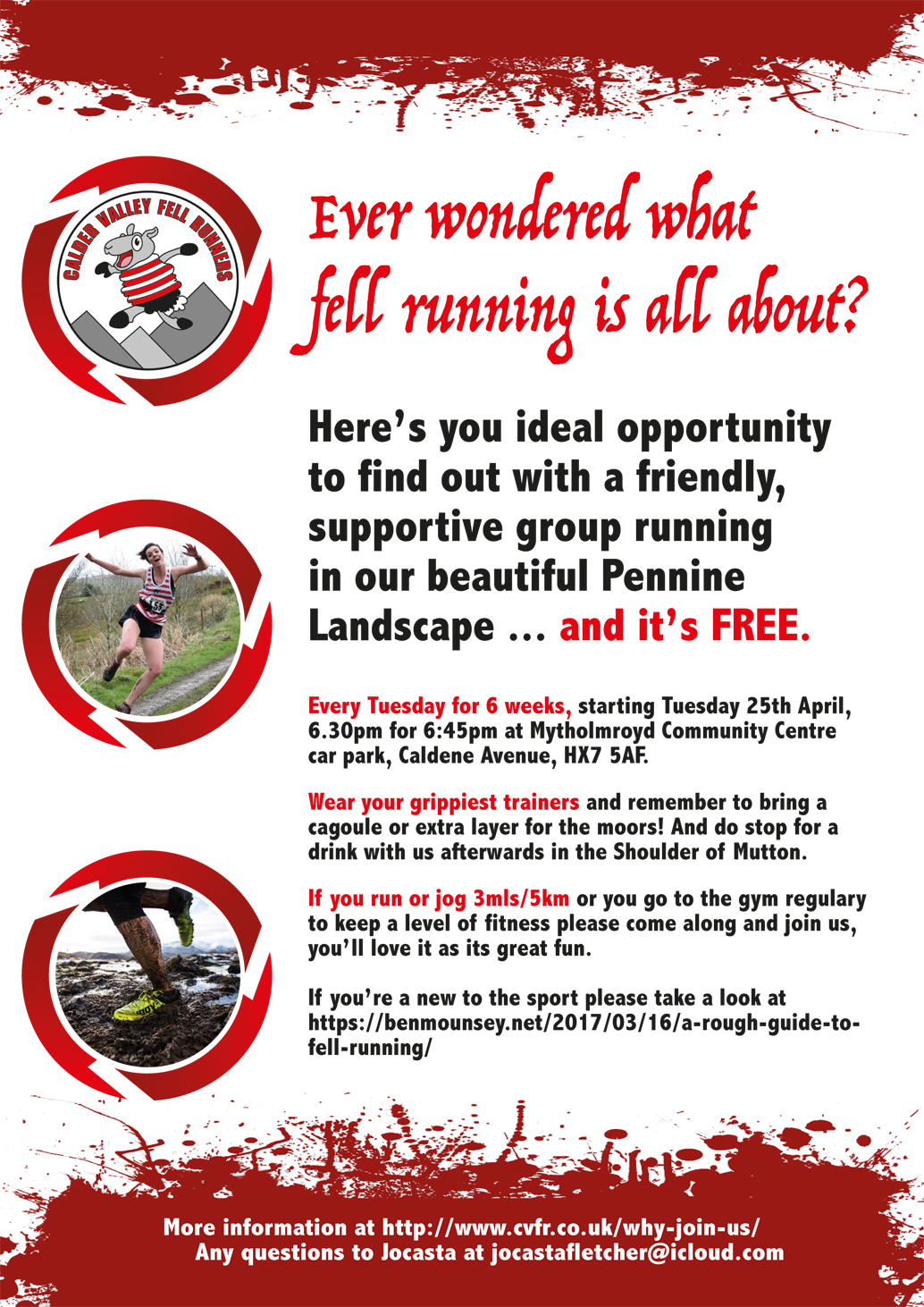