Last Saturday, on a glorious, crisp morning, 186 hardy runners gathered to conquer the Wadsworth Trog, otherwise known as ‘The Beast’. This race, hosted by Calder Valley, is a gruelling 19 mile and 3650ft of climbing over rugged moorland and fells. Challenging terrain dominated by bogs and tussocks makes this race demanding even for the seasoned fell runner.

Rob Jebb of Bingley Harriers was the overall winner at 2:37:26 with Calder Valley’s champion Ben Mounsey just a few seconds behind 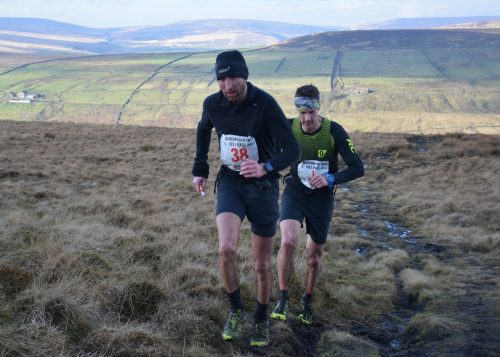 Ben Mounsey and Rob Jebb on the Trog 2017

The event was well organised with participants commenting on the friendly, welcoming atmosphere made possible by the army of marshals and volunteers who helped dispel any trepidation of ‘The Beast’

Race organiser Jake Akroyd said ‘With favourable weather conditions we had a record turn out of 186 runners for the race. Stand out performance of the day came from Nichola Jackson of Preston Harriers, completing the route in 2 hours 51 minutes and taking 18 minutes off the ladies course record. Host club Calder Valley won both team prizes with the men just edging out local rivals Tod Harriers.’

Helen Roberts, a newcomer to fell racing in the UK and used to dry trails back in Australia, said ‘This was my first experience of a fell race and I started out really nervous about the navigating and the hills. The hills were hard as expected, the navigation went well thanks to Ben Mounsey. But it was the bogs that got me, all that mud, wow that mud is a real game changer! The race was so well organised and everyone was so friendly and made me feel so welcome.’ 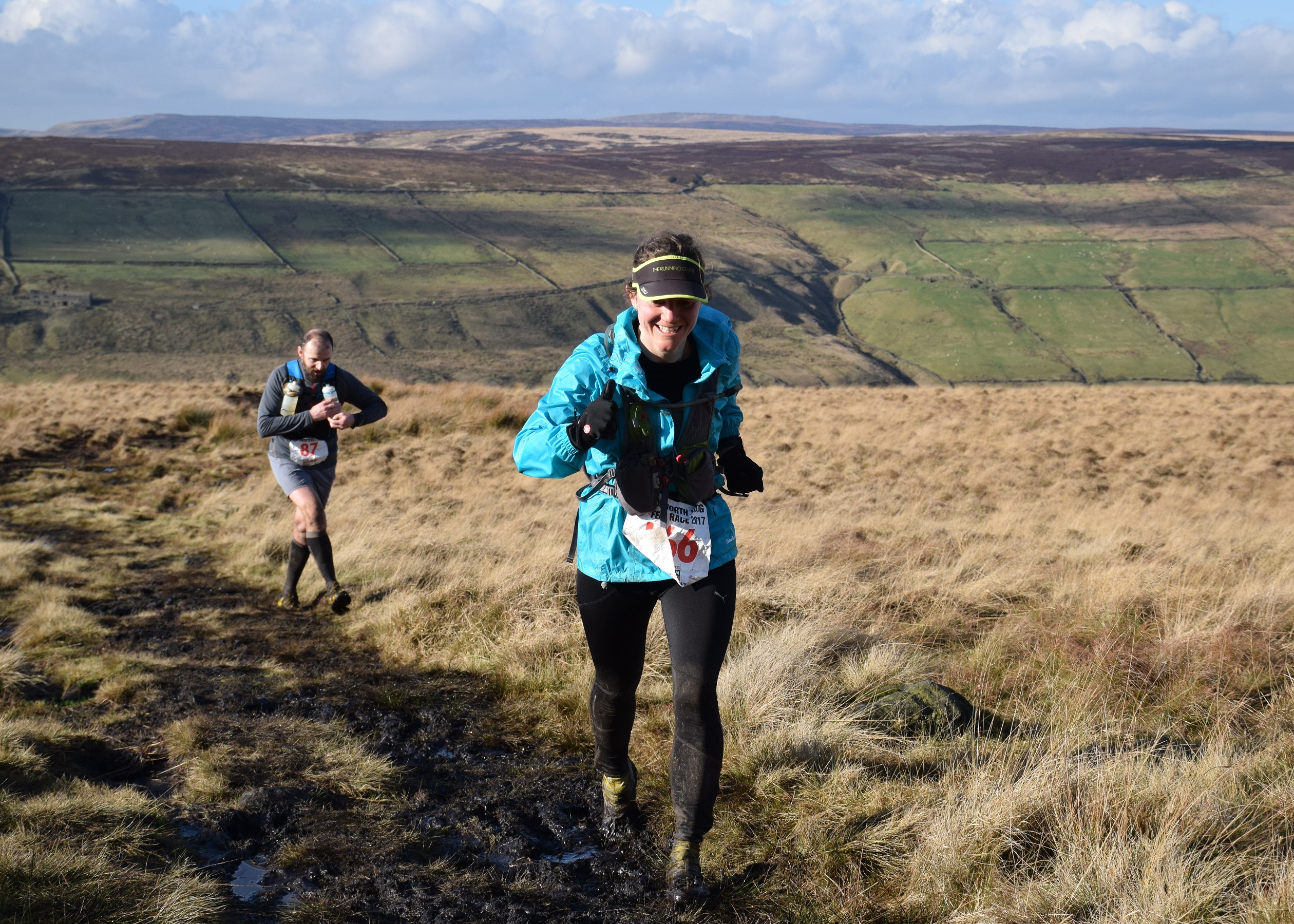 Helen Roberts at the Wadsworth Trog 2017

Ben Mounsey, Calder Valley’s national fell racing champion said ‘ I entered the Trog as part of my training for this year’s 3 Peaks so for me it was more about getting in the tough miles rather than breaking any records. Rob Jebb had the same plan in mind and we ended up running together for the entire race. Gav joined us but dropped off the pace at halfway and then he ran with Andy Swift and they finished together. Both myself and Rob ran strongly and I was really happy with my run over that distance (I’m not an endurance bunny!). I navigated us safely over the sections of the race that weren’t flagged and we agreed to finish the race together and share 1st place. Unfortunately my legs literally died about 800 metres from the finish and Rob pushed on to take the victory and I jogged in about 15 seconds behind. All in all it was a fab run and I’m pleased with how my prep for the important races is going. ‘The Beast’ lived up to its name. Although the weather was brilliant, it was extremely heavy underfoot and conditions weren’t brilliant because of the bogs and mud.’

Overall, it proved a great event which, as one runner put it ‘has given me very happy (and painful!) memories’. The Beast will be back!

And elsewhere…at the Kong MMM

3 Calder Valley runners went up to the Lake District to do round 1 of the Kong Mini Mountain Marathon in Borrowdale. Runners have 4 hours to visit as many control points as possible, collecting points for each one they visit and be back in the allocated time. 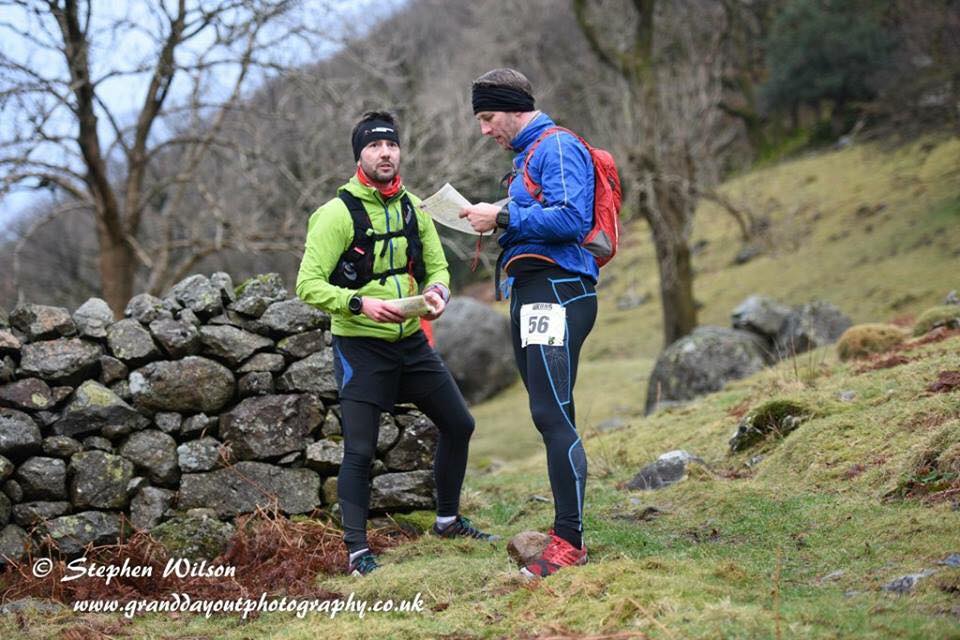 Frechette and Ingram on the Kong MMM 2017

A fresh morning in the Lakes gave way to harsher weather higher up with snow underfoot and thick fog making navigation tough at the highest points. Some precarious controls saw Ben Frechette and Richard Ingram getting a scare trying to reach a control on the side of Ullscarf under a ravine. But after a few bites of Kendal mint cake, they regained composure, having a good climb up to High Raise and taking some good lines back down to Langstrath beck to take a few controls on route, pushing up their point tally and leaving them with a sprint back to the finish at Borrowdale YHA. Linda Hayles had a great day and leads the FV60 Cat with 250 points putting her in 1st place, followed by Richard Ingram in the MV40 cat who held 3rd place until the eventual winner and Lake District legend Steve Birkenshaw carded 501 points putting him straight into 1st place and pushing Richard into 4th. Ben Frechette also scored 330points putting him into 3rd place in his category M. Round 2 will be held on Sunday 2nd April in the Lakes.

Reeth – The Scarfs and Al Morris

Held in the Yorkshire Dales, this adventure race is not for the faint-hearted: 3 hours of MTB orienteering + 2 hours of foot orienteering, really tested navigation skills. Several of Calder Valleys finest were in with the prizes, having collected over 500 points each. Jonathan Emberton came 2nd in the Male solos, Alistair Morris came a stunning 1st in the Male pairs and Cragg Vale’s Jackie and Phil Scarf won the Mixed Pairs by a whisker or 47 seconds to be precise. This is a series of 4 adventure races, usually held in the north of England.