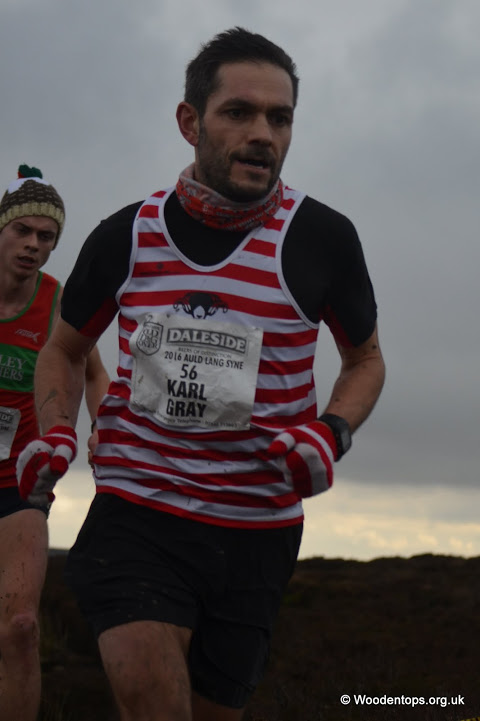 The 47-year-old Great Britain international came seventh out of 433 runners in the six mile race from Penistone Hill near Haworth.

Many of the runners wore fancy dress for a contest which includes almost 1000 feet of climbing, the route going via Sladen Beck to Top Withens and back.

Runners assemble in a quarry, accompanied by the sound of the bagpipes played by Calum Carslaw, for the traditional end of season contest.
The race was won for the second year in a row by Chris Farrell of Horwich in 41:31. Farrell was fresh from finishing second at the Ribble Valley 10k, where he just dipped under 30 minutes.

Chris Holdsworth was second on his 26th birthday and third was the 2013 winner Tom Addison before triathletes Lewis Byram and Jack Willis.
Gray clocked 44.33 and was edged out of over 40 honours by Farrell’s clubmate Nick Leigh, who finished one place and 20 seconds ahead.

In a high quality field Lucy Collins was first Calder woman back in 90th place and 9th female overall and she was followed by a three eyed alien aka Jo Buckley. 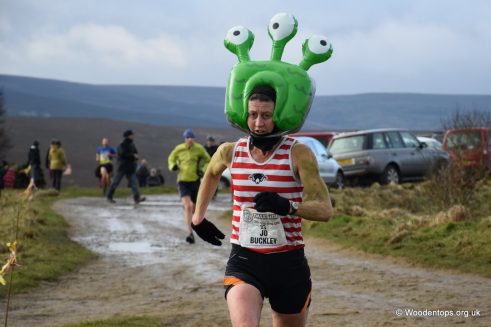 Katie Walshaw from Holmfirth won the women’s race for the third year in a row.
Farrell and Walshaw will have their pictures on next year’s bottles of beer provided by race sponsors Daleside brewery, Calder’s Andy Wright was shocked to be overtaken by a chimney sweep, complete with brushes! 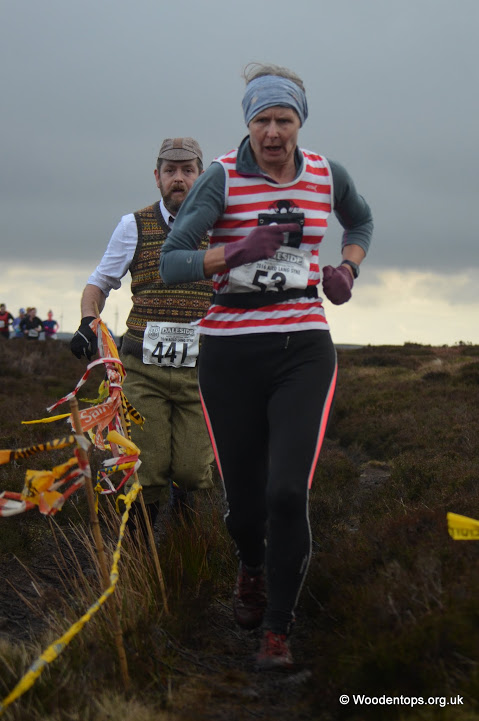 Calder Valley FR pair Douglas Zinis and Tristran Sheard had their own duel during the Giant’s Tooth Fell Race at Ogden on New Year’s Day.
A field of 145 took part in the three mile contest, which includes 400 feet of climbing and starts from the reservoir embankment. Zinis got the better of Sheard by two seconds as the pair finished 12th and 13th.

Paul Haigh (24th) and Dan Marsden (34th) also featured prominently for the club, which had 10 entrants. The race was won by Ali Burns of Valley Striders in 18 minutes and two seconds. Callum Harrison from the University of Manchester finished 17 seconds later and the frame was completed by Marcus Reedy of Rossendale in 18:23.