Calder Valley’s fell running aristocrats, ‘King of the Hill’ Ben Mounsey and Karl ‘Earl’ Gray lorded it up over their local manor in the Hebden 22. 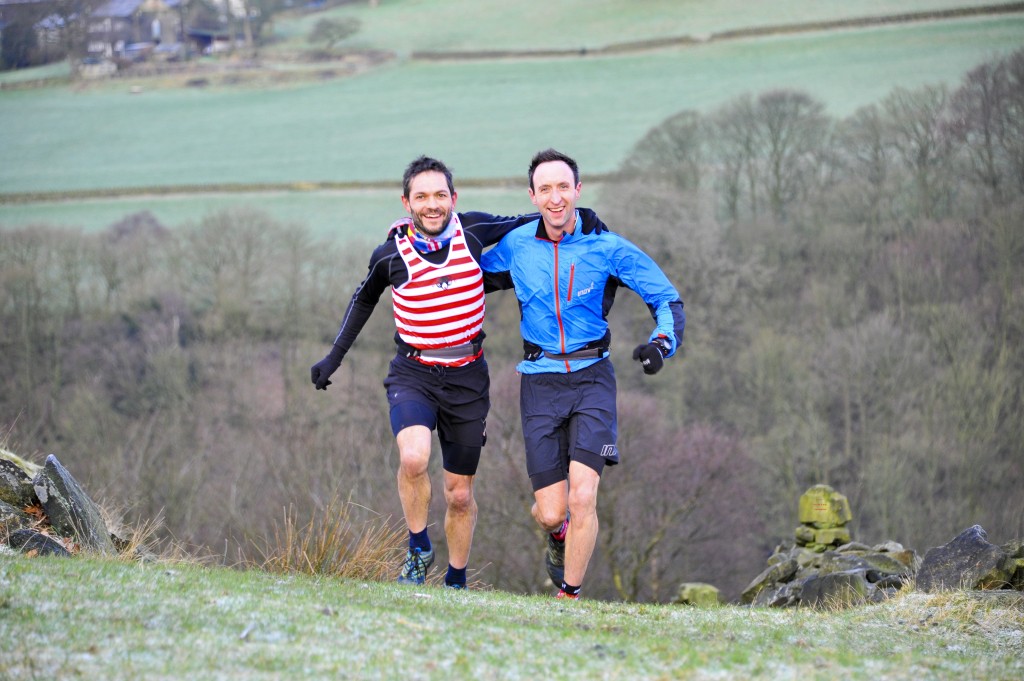 On an icy Saturday morning, the winter sun finally set the frosty landscape sparkling, providing ideal conditions for a fast run. After a glittering 2015, Mounsey and Gray smashed the course record, finishing together in 2 hrs 42 mins. The international pair were 18 minutes clear of third-place club mate Kevin Hoult. A large contingent of Calder Valley Fell Runners completed the event, including the inspirational Kay Pierce who celebrated her 70th birthday by running the 22 in 6 hrs 30 mins to finish 213th. Calder women’s captain Helen Buchan put in one of her best runs as fourth lady in an impressive 4 hrs 2 mins.

The event was organised by the Long Distance Walkers Association (LDWA). It was originally aimed at hikers and ramblers but has developed into an unofficial fell race as word spread that it offers a superb route, great company, and excellent organisation for runners and walkers alike.

The unmarked route demands navigational expertise over remote and hilly terrain, all combining to offer an irresistible challenge for fell runners looking for a big test of wit and endurance.

There is a 15 mile “short” option for those who prefer an early finish.

As usual the event was a credit to the efforts of organiser Allan Greenwood and his team of LDWA volunteers, who catered for 268 competitors on the long route and 85 on the short route. They provided piles of food and hot drinks at checkpoints plus a hot meal at the finish line.

It was the first local running event following the Boxing Day floods.  Undeterred by the loss of St Michaels Church Hall, the LDWA team took advantage of the kind offer to use Mytholmroyd CC as race HQ.

Mounsey said: “We intentionally set out to break the course record.

“We are both in fantastic form and even though I’d just recovered from a serious bout of man ‘flu it didn’t affect me. “Despite the route being slightly shorter than the usual 22 we would’ve still broken my old record.  I set a ferocious pace and Karl hung on and sat behind my lead.  “We are aiming for the Three Peaks and based on this we should have a good run.

The snow and ice created a picture postcard winter scene around the Haworth moors for the Woodentops Soreen Stanbury Splash race on Sunday morning.

Calder Valley Fell Runners were also represented and won the women’s team prize.  The freezing conditions meant that the race was in fact run over the Stoop course –there was simply too much ice on the Splash course to make it viable.

The runners took on a pan handle shaped route that led out to the Stoop stone and back, taking in trail, frozen bogs and thick icy mud along the five mile course.

Dave Woodhead’s customary words of encouragement and advice to ‘stay on your feet on the way down’ were heeded by most, although cuts and bruises from falls in frozen bogs were evident on the legs of some of the finishers.

The race was won in runaway fashion by Ilkley’s Tom Adams in 31.14. He was followed home by clubmate Jack Wood in 32.48. The first woman home, in 34th overall, was Holmfirth’s Helen Berry in 39.03.