Mention the “Stoop” and 2 things spring to mind, Santa Hats and Bogs. 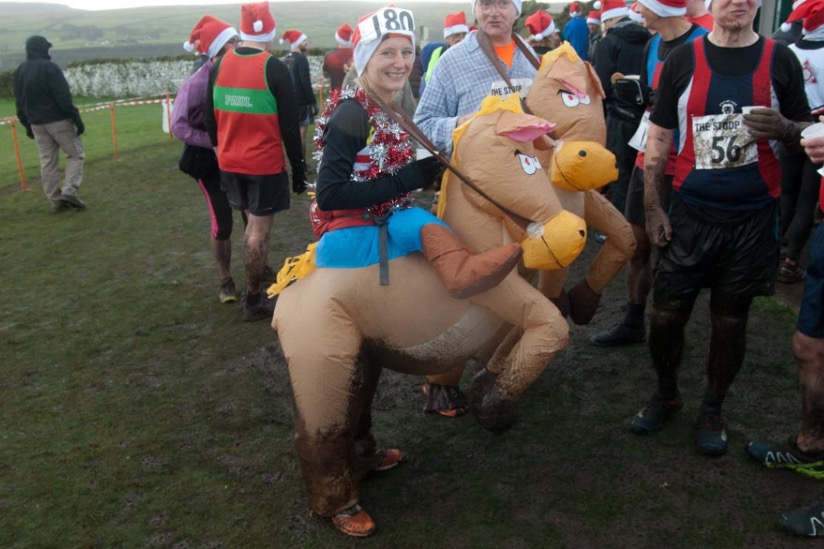 Sunday’s Stoop Fell Race did not disappoint as a festive band of Calder Valley Fell Runners lined up with 450 cheery revellers, clad in fancy dress and fell shoes, in a windswept quarry above Haworth.

The 5 mile Stoop Fell Race route is what experts term a “lollipop”. From an aerial perspective, race begins by tracing its “stick” as runners speed along a straight track to the moor. The “lolly” of the course then traces a circle 750 feet up and down Stoop Hill, before returning the way it came, on a linear path, back to the start at Penistone Hill. The irrepressible race-organising double act of Dave and Eileen Woodhead (aka The Woodentops) have helped The Stoop evolve into fell-running’s answer to King’s College’s Festival of 9 Carols and Lessons. 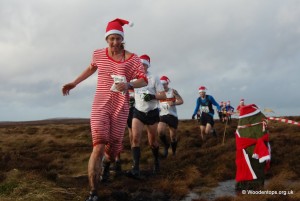 Jo Buckley in her “Santa all in one, where’s wally”

For many in the sport this event, now in its 27th year, has become an important ritual, signalling the start of Christmas. However it would be a mistake to assume that this merry atmosphere might take the edge off some serious athletics. The Stoop also has reputation for bringing together the big guns of fell running for some ultra-competitive racing, in a temporary suspension of the season of good will.

The 2015  race was no exception, as Pudsey and Bramley’s Rob Hope tangled with the likes of Tom Adams of Ilkley, and Bingley’s Ian Holmes. Hope was first home in 31.08, just 4 seconds ahead of Tom Adams and Mercia’s Simon Bailey, who both crossed the line in 31.12. Preston Harrier’s Nichola Jackson was first lady in 38.08.  Calder Valley’s elites had a day off, but a host of red-white hooped vests, survived the bogs to enjoy the post-race festivities back at the Sun Inn.

83 runners lined up on a crisp morning for the local classic, Mytholmroyd Fell Race.
A seven mile slog around Midgeley Moor organised by Halifax Harriers on Sunday. The route takes you steeply up on to the moor before dropping down a tricky path, up the dreaded ‘steps’ in Luddenden valley before traversing around the moor and flying through bogs, gorse and fields back down to Mytholmroyd. 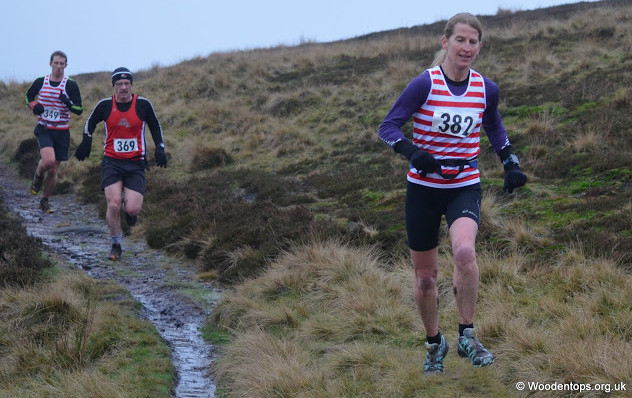 Calder Valley Fell Runners, based in Mytholmroyd, had a turnout of 12 at the race, enough to scoop some of the prizes. The run of the day was by Calder Valley’s Anne 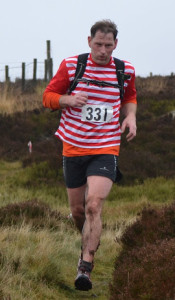 Johnson, who won the women’s race in 62.36, two and half minutes ahead of second female Joanna Goorney. Also running for Calder Valley was Rachel Crossland, back on the hills after a recent injury.

The men’s race was won by Neal Crampton of Pudsey & Bramley in 50.35, a minute and a half ahead of second Place Robb James of Royton. Iain Powell was first Calder Valley runner in, in seventh place in 56.26, beating off stiff competition from some speedy runners behind him. Always placing well, Iain has been getting faster and faster this year. He was joined by Mark Wharton in 14th and Richard Ingham in 17th who together took the first team prize.

This year’s club star runner, Ben Mounsey, has been recovering from near-hypothermia after terrible conditions at the Lee Mill relay a couple of weeks ago, but seems to be back to strength if his performance at Hopton Mill is anything to go by.

The first in the cross country West Yorkshire Winter League, Hopton Mill was a short, fast run.  Ben was running for his cross country team, Stainland Lions.  In trademark style, Mounsey shot off at the start leaving everyone else competing for second.

Blackshaw Head resident and Calder Valley Fell Runner, Ian Symington came third in the Frostbite 30 last weekend.  A 34 mile ultra starting in Patley Bridge the race heads up the Nidd Valley as far as Scar House Reservoir before returning to Patley Bridge.  The rivers were high and Ian had to help a fellow runner who was about to get swept downstream.  He was five minutes behind the joint winners in 5 hours and 7 minutes but this was enough to seal the overall series win.  Calder’s Kevin Hoult was 6th, 12 minutes behind Ian. 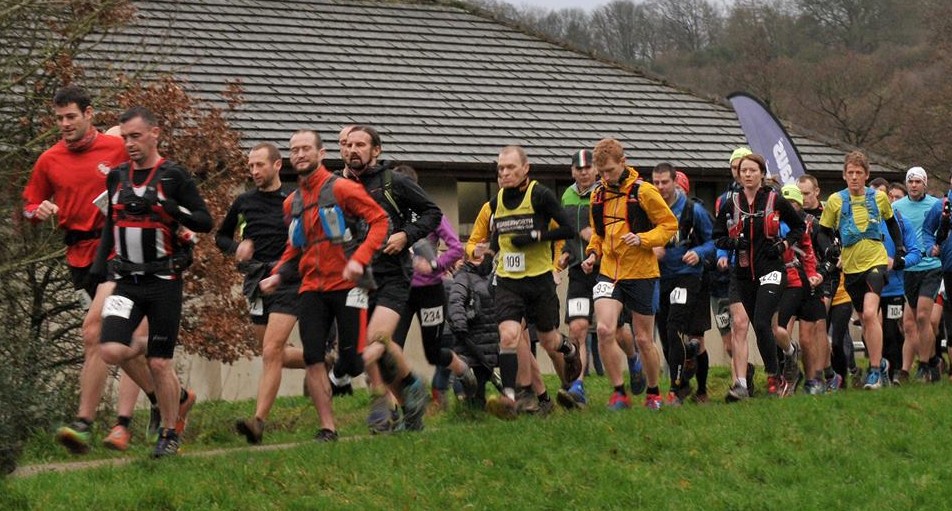 The pair have had an excellent year with Ian coming first and Kevin second in the Runfurther Ultra Championship.

Calder Valley Fell Runners held their annual winter navigation event on Sunday. The event moves to a slightly different location each year and this year it was based In Todmorden with last year’s winner James Logue organising.  Checkpoints were located widely, over the surrounding hills and moors to test both physical and navigational ability.

The horrendous weather of Saturday was replaced by a dry and bright day as the 50 runners set off at intervals. They had 3 hours to visit as many checkpoints as they could without incurring penalties for being late.  Experienced orienteer and long distance specialist Simon Bourne produced a performance of high quality to win by a clear margin. His route took him towards Blackshaw Head then over the moors to Hurstwood near Burnley before sweeping South over Flower Scar and returning through Centre Vale Park.  First woman was Todmorden’s Mandy Goth whose extensive experience and success in mountain marathons showed as she came in 8th overall.

Current English Vet45 champion Karl Gray, working hard to improve his navigation, came in second place closely followed by Cragg Vale’s Phil Scarf.  Regular organiser of the event, Bill Johnson, made the most of his opportunity to compete by being out for almost 3 and a half hours, despite the considerable penalties he was awarded, he’d still got enough points to take 4th place. 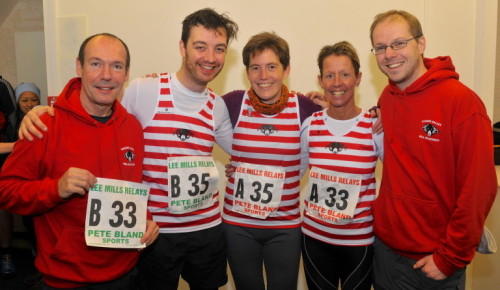 Following the limited numbers of teams allowed to enter the recent British Fell Relays, Calder Valley Fell Runners were keen to look for a challenge where all members could take part. The Lee Mill Relays, held last Sunday in Rossendale, seemed to fit the bill. From an entry of 25 teams last year, 109 teams entered this year with 14 of them from Calder Valley. The race seems to be a good seasonal replacement for the Calderdale Relay which is now run in the summer. The route is a 6.2 mile loop around Britannia Quarry and up on to Rooley Moor, run once by each member of a four person team.

The teams were self chosen which provided some serious ‘in club’ competition. The Golden Oldies v the Youth Team (i.e. under 40!), a three way tie between the Shimmy Shakers, The Herbivores and The Gladiators; The Craggies (not sure if the name was because they are all over 50 or they all live in Cragg Vale), Red RO’s and the Taps; The Ladies v Generation X; Meet the New Flockers, The Deckchairs and The New Kids on the Flock. 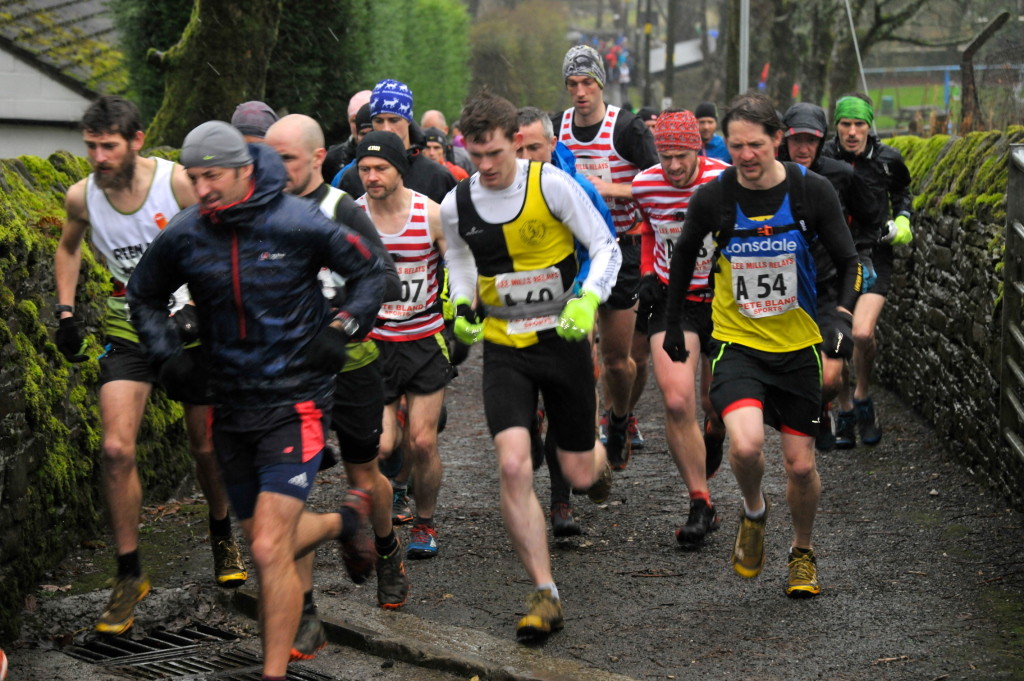 Never mind the competition though; the weather was the real challenge, especially for people running the last leg. The wind and rain had been noticeable for the first couple of legs but as the later runners set off, the wind increased and heavy rain and hail battered the runners. It became a battle for survival; Phil Beecroft (CVFR Mud Socks) fell and gashed his arm, Manhar Patel (CVRF Deckchairs) ended up in A&E needing stitches for a gash to his head. International star, Ben Mounsey returned with early stage hypothermia and had to be re-warmed, sandwiched between club mate Gavin Mulholland and Todmorden’s Claire Harris. 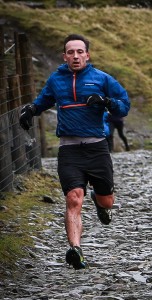 The hero of the day was Nathan Kennaugh (CVRF Gladiators) who grabbed the hand of a runner who was about to be blown into a barbed wire fence and then helped her down to safer ground.

In those conditions fell runners will always help each other even if it means losing time. This race will surely go down with the Edale Skline 2007 and the Great Lakes 2012 as one with the toughest conditions of recent years.

Back to the race, the main opposition to a CVFR win came from the Green Head Monsters, a crack team of Jack Smith, Ian Holmes, Sam Watson and Tom Addams.

After the first leg Math Roberts (CVFR Youth Team) came in a second ahead of Jack Smith in the fastest leg of the day 50:48. However by the end of the second leg Ian Holmes had given the Green Head Monsters a seven minute lead, which remained unassailable to the finish. Tim Ellis (CVFR Youth Team) recorded the fastest Leg 3 time but the lead was too much to pull back. CVRF Golden Oldies were within 20 seconds of the youth team but Karl Grey couldn’t reel in a rapidly fading Ben Mounsey. 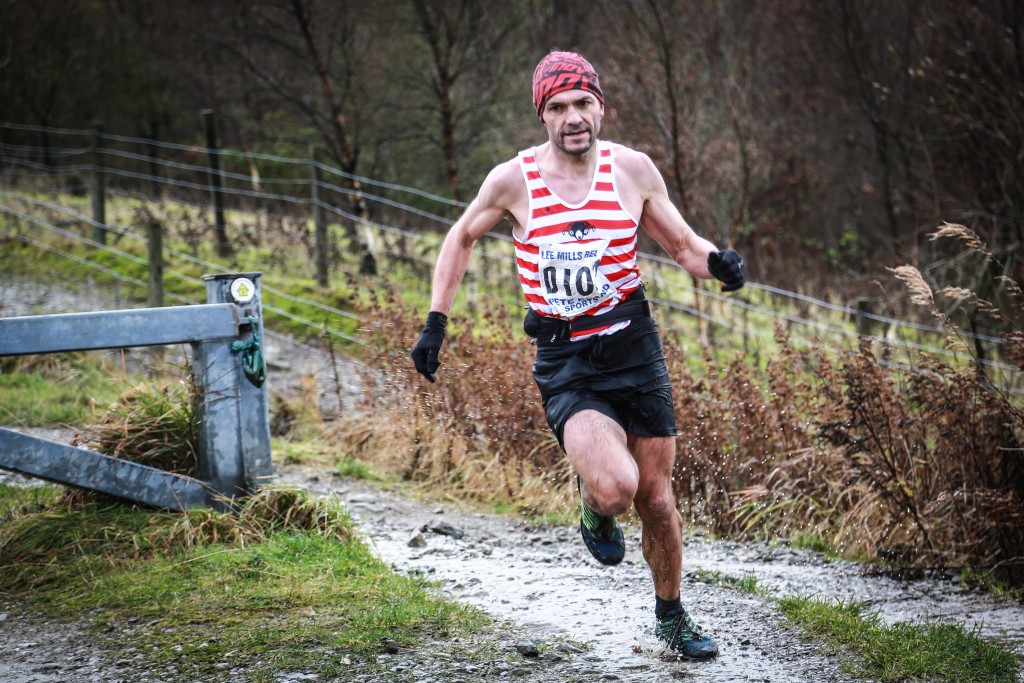 So a 2nd and a 3rd for the men was backed up by 4th place in the womens competition for the CVFR Ladies. Lucy Collins got the second fastest women’s time of the day just behind Emma Gould of Mercia. Amanda Altman ran the second leg in her second fell race, surely a memorable experience.

Further down the field the hot competition between the Shimmy Shakers, The Herbivores and The Gladiators came out with the Shimmy Shakers on top with strong runs from Lee Shimwell, Mark O’Connor, Richard Ingram and Jim Mosley who returned to racing after nearly a year off with injury. The Gladiators trailed the Herbivores by less than two minutes. 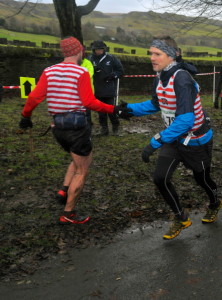 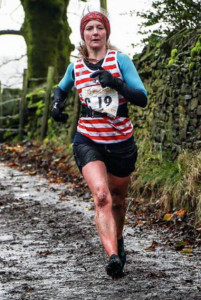 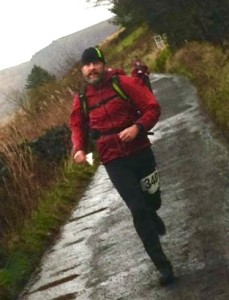 The fourth race in the RAB Mini Mountain Marathon Series was also held on Sunday. Running from Greenfield the course covered the featureless moorland east of Dovestones Reservoir to Black Hill and the Moors above Longendale.

The 191 runners were given a map at the start of the race and had to plan their own course to find as many controls as possible in a four hour limit. The weather was a major factor here too, with no sheltered control available, harsh exposure was inevitable. Stream crossings were also interesting.

Tim Brooks was 3rd overall and first veteran. In the four race series the best three results count towards final positions. Linda Hayles result meant she won the womens V60. Gerry Symes who was leading the mens V60 before the race came in third in the end. Tim Brooks was 2nd in the mens V40.