Martin and Lindsey (www.woodentops.org.uk) in action and a very happy winning mens team.

The ever popular Midgley Moor Fell Race drew record attendance of 191 runners last Saturday.  Being in several local clubs’ championships including Todmorden, Saddleworth and Holmfirth many people attended this local classic short race which starts from Booth in the Luddenden Valley.

Organised by Calder Valley club members the 5 mile race raised money for Cancer Research UK and it raised over £900!!!  Calder’s Shaun Godsman was first to the checkpoint on Crow Hill and led from there on via Churn Milk Joan, Sheepstones edge, Luddenden Dean and back to Booth by the pathless heather of Midgley Moor.  He said he really struggled but never the less won by over one and a half minutes in 39.33.  It’s good to know that the elite runners also find fell running tough.  Surely he must be a contender for big points in the first English Championship race next weekend, Flowerscar run from Centre Vale Park in Todmorden.

Neil Crampton of Pudsey and Bramley was second followed by Mike Fanning of Borrowdale and Mark O’Connor in 4th.  Club Champion Mark just keeps getting better and this writer is tipping him for English points next weekend. Not so lucky was Joe Crossfield, in third place at Churn Milk Joan, he took an experimental line to Luddenden but ended up floundering in deep heather near Robin Hood’s Penny Stone.  Sometimes these route choices can pay off but not today for Joe who came in 12th.

However Joe’s consolation was making up the winning men’s team along with Shaun and Mark. One of our rising stars Martin Howard is showing lots of improvement by taking 1st under 18 and a great 17th place overall.

The first women’s team was local rivals Todmorden Harriers.  Helen Berry of Holmfirth won the women’s race with ever improving Calder’s Lindsey Oldfield in 4th and Sally Newman in 5th.

The farmer at Dean House Farm who lets the race use his fields, also kindly donated several crates of milk, which were much appreciated by many runners at the finish.

Gayle back to winning ways. www.woodentops.org.uk

Several fell running supporters went to Sheffield to support Max Wharton at the indoor 800m English championship last Sunday.  Max had a storming race and took silver medal, missing out on gold by 0.11 of a second.  Not bad for a fell runner! Roll on the out door season.

Calder Valley’s seniors and juniors headed to Ilkley on Sunday for the 26th running of the Ilkley Moor fell race. This popular race covers 5miles but gains its A rating by virtue of a hefty 1400ft + of climb – not to be sniffed at in such a short race.

The race involves a steep climb up to, and then a traverse of the famed Ilkley Moor, which, hat or no hat, provided a proper test of fell running. Sunday’s wintry weather made a hat advisable and it was Mercia star and former English Champion, Simon Bailey who took the spoils, beating local whippet Tom Adams into second place in a high class duel which went all the way.

In the ladies’ race Super Sally Newman, after a lay off with injury, was first Calder lady home and took the 1st lady vet 40s prize after another excellent run. 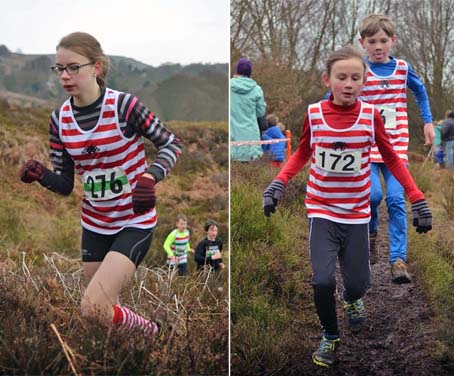 In the juniors, the Under 14 race saw Calder’s Cherry Sylge card an excellent 14th (3rd girl) place, nudging home just ahead of team mate Toby Brunt. Not far behind was young Danny Wills in 17th place.

Many came to watch the Under 12s race and with a star studded field, Calder’s Jude Baldaro can take great heart from his 7th place, with Elio Beesley not far behind in 13th. Beth Blacker can also be pleased with her impressive 30th (7th girl) place.

The Under 10s race was no less exciting; Calder’s two rising stars William Hall and Alex Duffield slugged it out to finish 2nd and 3rd respectively but couldn’t catch Ilkley’s Evan Mills, whom I’m advised is one to watch. Joseph Hobbs shaped well for his 5th place.

Sunday’s weather also added a dash of spice to Saddleworth’s New Chew Score event, a 4.5 hour navigational race event held above Greenfield. Having set off in pleasant conditions, come lunchtime the weather had turned brutal with many runners being caught high up on Saddleworth Moor as the blizzard hit. Fun and games for all concerned with Calder’s Steve Smithies, Jon Underwood and Jim Mosley three of the runners out there in no man’s land. Compass work, bearing skill and girded loins were the order of the day to get safely back to base. Steve demonstrated great skill and route choice for an excellent fifth place overall. 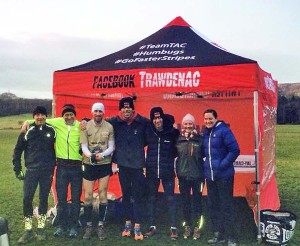 Sunday was also the inaugural running of Canonball Event’s ‘Trailblaster 12’, a non-stop, 12 hour race around Townley Park in Burnley. The brainchild of local running mogul John Lloyd, teams of runners do continuous loops of the park for 12 hours, yes 12 hours, and see how far and how many they can do. Calder’s captain dynamo Helen Buchan joined one of the teams’ with John and pounded away, lap after lap, raising money for local Pendleside Hospice. Helen explains, “smile emoticonIt was honestly the hardest thing I have ever done as the weather was horrific! There were 5 of us in the team & we all had to run six 5k laps on a hilly trail route around Towneley Park. The hardest thing was trying to stay warm in between each lap. We set off at 7am & finished around 18:40 last night. We all had to dig really deep for our last laps but we did it and have raised nearly £1000 for the hospice”.