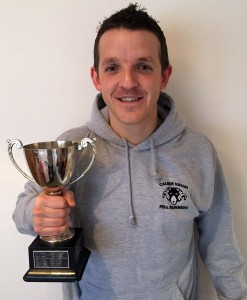 Calder Valley fell runners enjoyed a busy time both on and off the field this weekend. The annual club bash was expertly organised by ladies’ favourite, Ben Frechette with over 90 members enjoying an evening of high spirits and revelry at Sowerby Bridge’s ‘The Works’ pub.

Various awards were dished out including Mark O’Connor as men’s champion, Bill Johnson as members’ vote for runner of the year, Martin Millard as most improved runner and ladies’ captain, the brilliant Helen Buchan for just about everything else. Once the beer and spirits had got to work, the elite runners commandeered the dance floor, stripped down to their waists and made a hash of virtually every naff dance move known to man. Garry Traviss’s tumbling Moscow circus act and Tim Ellis’s bouncing kangaroo being particular highlights.

Getting blind drunk isn’t usually a good idea before any sporting event, but to do so before the club’s Winter Handicap race is particularly foolhardy. The race, which is a testing 5.5mile dash up to Stoodley Pike and back from Mytholmroyd, is always a keenly fought event. The time of year always adds a dash of spice and we weren’t disappointed with a healthy covering of snow and bitterly cold temperatures making conditions particularly dicey. The handicap gives lesser runners a chance to win an event and spend time at the head of the field. Golfers hack around undercover of handicaps every Saturday in the club medal, so why not fell runners?

Times are devised by club wizard and chairman Bill Johnson, who pores over the season’s results to date, applies a dash of his magic formula and then arrives at a set of staggered start times: slowest first, fastest last. In contrast to the mass start of a normal race, the handicap’s staggered start adds an interesting new dimension and ramps up the start line nerves by several notches. Will you be hunted or be the hunter – predator or prey? Bill’s timings are always a healthy source of debate, but they are usually intriguingly accurate. The plan is that you should all converge upon the finish line pretty much in unison, should Bill’s time prove to be on the money, with a madcap dash for glory unfolding in Stubbs Field.

First off was John Riley, club stalwart and fell running veteran, closely followed by Dan Biggs. Dan, a resident of Shap in Westmorland, and as such no stranger to adverse weather, made the early headway and set off up toward Daisy Bank with real purpose. Dan, of fuller build than your average fell runner, has shed over four stone in recent months, and would be first to admit he still has some way to go; but as he hauled his ample frame up toward Dick Lane, all he was looking to shed was the gap between him and John Riley, and then hold on grimly against the advancing field. It would be another sixteen minutes before the next runner set off, Graham Davy girding his loins and making the ascent up the snow covered ramp.

As the clock ticked down, race organiser Tim Brooks would call the nervy protagonists to the start line and count them in. Next off was first lady to go, new signing Rachael Crossland from Stainland, followed a few minutes later by Nathan Kennaugh and Ormskirk’s birthday boy Gavin Roper, returning home to the Valley for a weekend’s celebrations. As the start times began to condense, the tension rose to fever pitch and off the runners set off, one by one, heading off up Daisy Bank towards the wind swept majesty of Stoodley Pike. All the while, the top gun pistoleros, Irish greyhound Gavin Mulholland and fell legend Karl Gray were patrolling the pit lane, signing autographs and keeping sponsors happy, waiting at the rear to chase down the pack, confident that any head start was within their range. 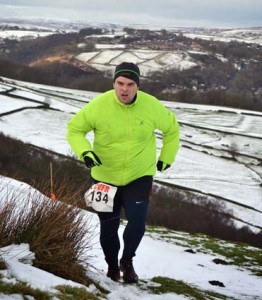 It was Dan who rounded the Pike first and turned for home but by now the field were closing in. None more so than Iain Powell who having climbed superbly to Erringden Moor and then to Dick Lane, pocketing Richard Ingram and Jim Mosley in the process, put the hammer down having touched the Pike and set his sights on Dan. Young stars Martin ‘Howitzer’ Howard and Jack Denton had also sped through the field and were homing in on the lumbering Shapwegian. Battles raged across the moor as personal duels took shape as the handicaps began to unwind. As the field plunged down toward Daisy Bank enter Tristan Sheard, Jim Mosley, Davy and Nathan Kennaugh in a keenly fought group, then Ben Frechette and Mark Wharton scrapping once more, followed by Steve Smithies and Mark O’Connor. If this were a horse race, the commentator’s voice would by now be rising to a heady crescendo, a la Peter O’Sullevan. Could Dan hold on as the field remorselessly chased him down?

As Dan came barrelling down Daisy Bank toward the finish, Powell found another gear as he descended into Stubb Clough, passing a fading Gav Roper as he did so and now with only Biggs to go. Powell had the pace to catch him but did he have enough road to reach him in? Could Dan hold on and reach the sanctuary of the finish line where Powell’s chase would be extinguished? Panic and fear spread across Biggs’s face. Star golfer Powell, more used to chasing birdies than Biggsies, was breathing down his neck and firing on all cylinders. Into the last football field with the tape in sight and a herculean last push from Biggs, now with sweat and spittle encrusted all over his face, saw him scramble over the line as the victor, collapsing in a heap in the finishing funnel as he did so. Powell followed a whisker behind, his brilliant run only good enough for silver, and Gav Roper tumbled in soon after, just holding off the advancing Bert Ingram.

The next few minutes saw the rest of the field arrive, Bill’s timings holding up nicely and Gav Mulholland recording fastest time of the day. An excellent event superbly put on by Tim Brooks and his able support cast. Runners retired to the warmth of the Shoulder of Mutton, where Dan gleefully accepted his first major running silverware. His weekend was completed on Sunday when his wife gave birth three weeks early to their first child, a daughter Lily-Ella. Dan has confirmed his life will never be the same again and he has been on a high ever since, but is determined not to let the victory change his life too much.

Also at the pub, Dave and Eileen Woodhead from Howarth, aka Woodentops Fell Running, were presented with their associate life membership from Calder Valley in recognition for their tireless work for the sport. As well as staging several high profile events in Bronte Country, they are regular attendees at most local fell races, providing high quality images for local press, and have also played a key part in developing local talent such as the Olympic winning Brownlee Brothers. Rarely has an award been more deserved.

Fancy a go yourself? You don’t need to be a superstar runner to enjoy this great sport – just visit www.cvfr.co.uk