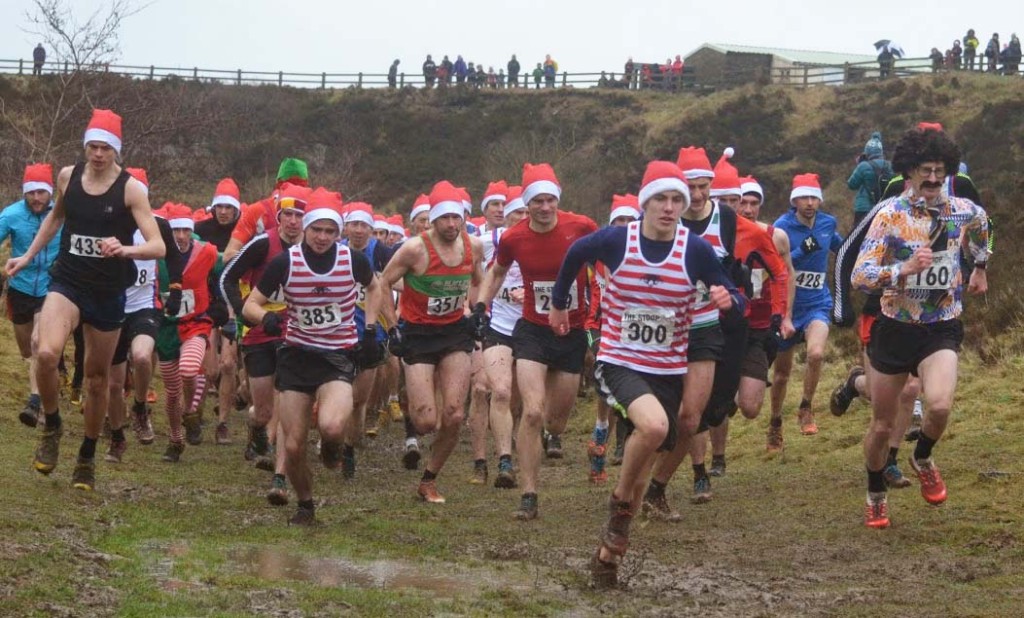 its up front for Jack D & Max W
www.woodentops.org.uk

Calder Valley’s young stars were to the fore in Sunday’s festive Stoop race, run by Howarth’s indefatigable fell running enthusiast, Dave ‘Woodentops’ Woodhead. The Stoop is one of a number of excellent races he puts on starting out of Penistone Hill quarry. The 5 mile burst sees runners traversing classic Bronte Country and Kate Bush would have approved of the wild, wet and windswept scene that awaited the four hundred plus runners, each sporting the mandatory Father Christmas hats to complete the festive feel.

Calder’s Jack Denton led the charge as he took the famed photo bragging rights by emerging out of the quarry in the lead, ahead of the illustrious field that included local fell legend Ian Holmes, current British Champion Rob Hope, former British champ Simon Bailey and serial winner Tom Adams. Young Jack is learning well how to pick his moments!

Alas, Jack faded somewhat to finish 25th, but it was his team mate and rising England star, Heptonstall’s Max Wharton who showed him how it’s done. Max demonstrated his talent with an outstanding fourth place, beating Ian Holmes into fifth, and just behind three of the sports hottest names. Tom Adams won in a keenly fought duel with Simon Bailey, with Robe Hope, admittedly dressed as a 70s New York cop, into third. Max can take great heart from his result and he is surely one to watch in 2015.

In the ladies race, Jo Buckley was best placed Calder in 86th and 5th lady and capped another solid season.

The race which is always run in a fine festive spirit, attracted a lot of interest from Calder with a merry band making the trip over Cock Hill. Good runs came from new club champion Mark O’Connor, Richard Ingram, Nathan Kennaugh and Jake Ackroyd. If you fancy getting involved and joining the fun, visit www.cvfr.co.uk 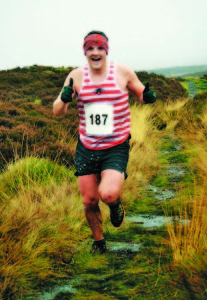 Mytholmroyd Fell Race was the venue for the final race in the Calder Valley Fell Runners annual Club Championship.  With Karl Gray running at the Lee Mill Relays, “Royd Rocket” Mark O’Connor was well placed to take the Championship crown.

In the Vet40 category it was possible for either Mark Wharton or Richard Sunderland to win.  With Richard having a two point lead going into the race, Mark had to be the first or second Calder Valley Vet40 and beat Richard by two places to win.

The 7 mile race starts with a sharp climb of nearly 1000 feet from Redacre Bridge in Mytholmroyd to Churn Milk Joan on Midgley Moor.  From the outset Mark O’Connor led the Calder vests to come back in 8th place and win the Club Championship in convincing style.  Giles Simon also put in a storming run as second Calder finisher in 11th place.

In the battle of the Vets, Mark Wharton, chasing hard all the way, couldn’t beat Richard on the steep climb out of the Luddenden Valley and had to settle for second place for the second year in a row.  These two have tussled for the top spot all year so it was fitting that the final race of the season was the decider.  Richard was 3rd Calder finisher in 12th place and Mark was 4th in 14th. 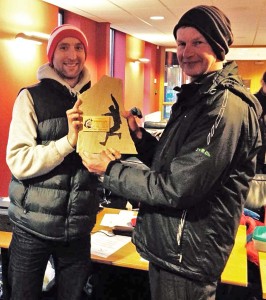 A new fell relay race has been organised by the Rossendale Harriers.  Heading out of the Rossendale Valley through the Lee Mill Quarry area and up to the Top of Leach, the race involves teams of 4 running the same six mile loop in turn.  Calder Valley Fell Runners sent over two top teams hoping to set the bar for the future.  The clag was down and the wind was getting up, with 25 teams running the route it was not a case of follow the leader, in fact many ran the route without seeing another runner.

The A team of Gavin Mullholland, James Louge, Karl Grey and Ben “The Bullet” Mounsey put in 4 of the six fastest legs to win the event outright as planned in 3 hours 4 mins and 7 sec.  “The Bullet” ran the fastest leg of the day (44mins 33sec) and therefore won the £50 prize money.  The drinks were on him then!!! With Horwich coming second (3:09:26) Calder’s B team of Tim Ellis, Joe Crossfield, Jonny Helliwell and Darren Kay also put in a top performance placing 3rd out of the 25 competing teams (3:21:33). 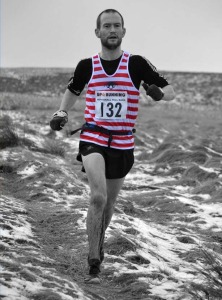 Calder Valley’s Ian Symington capped another outstanding year of ultra-distance running by winning the coveted ‘Run Further’ championship, run over a series of twelve races. Ultra running is classed as anything above the standard 26.2mile standard marathon distance with races typically between 30-50 miles. Ian, Blackshawhead’s don of distance, excels once the going gets gruelling. Consistent top five finishes plus a super win at the Long Tour of Bradwell, saw him seal the crown to take his rightful place among the very best of the British ultra-running scene. Even better, Calder Valley scooped the overall men’s team prize with Ian being joined by team mates John Minta and Kevin Hoult, themselves both teak-tough distance men.

An early exit from work and a Friday night dash up the A65 for the score event, this year based around a surprisingly comfortable bunk barn on the edge of Sedbergh in the Howgills.

Bill arranged a packed weekend of running, the first event being an informal mini night navigation event shortly after we arrived on the Friday evening. This was a short, though hilly, course visiting 3 checkpoints, with a return visit to the first checkpoint on the way back. Unfortunately I blew my team’s chances by making the rookie mistake of heading in the wrong direction off a summit. Once re-oriented we thought it would be safer to quit and head back to the start, to avoid triggering a search and rescue operation (and delaying the visit to the pub). Fortunately my partners DNF-free record was kept clean following skilled negotiations with the organizer, and we gave everybody else something to laugh at.

We managed a brief outing to a cosy pub in Sedbergh and everyone had a sensibly early night, in anticipation of the next day’s challenge.

We awoke eagerly on the Saturday morning, helped by an incident involving a gluten-free brioche and a smoke alarm. The main event of the weekend was a score event, the aim being to visit a series of checkpoints, each allocated a points score, with more points for the harder to reach checkpoints. There was a time limit of 3 hours, with the threat of points being eroded from your score for every minute late back. 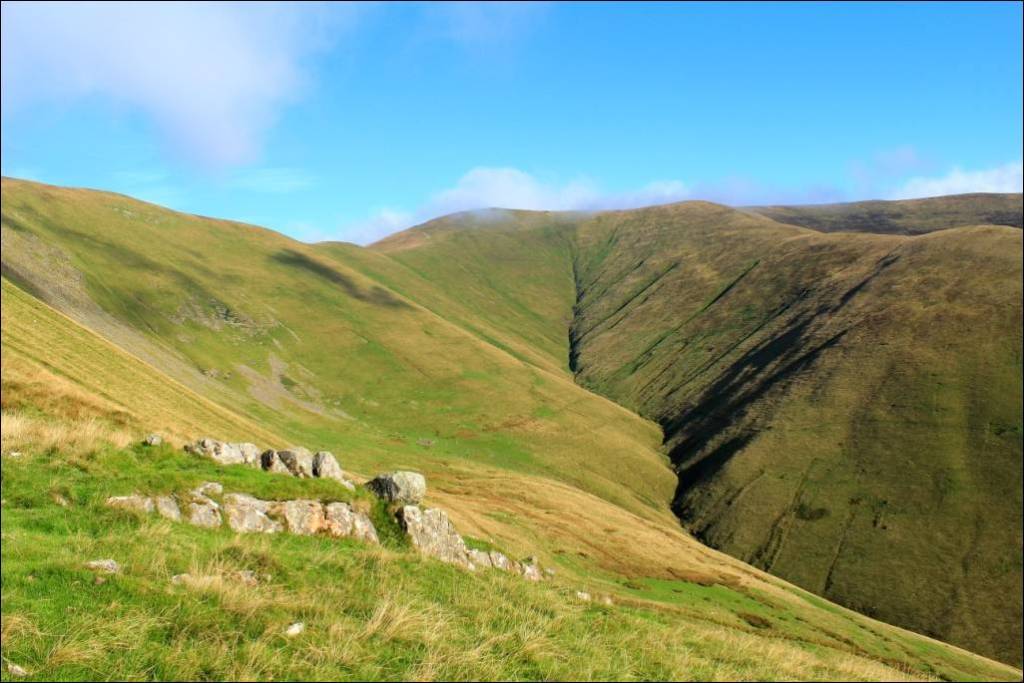 The Howgills provided a very different challenge to the previous years events based in Calderdale, where navigation usually involves deciphering the intricate network of paths and tracks. The Howgills landscape is a much bigger scale, real mountain upland territory with steep, energy sapping climbs of several hundred metres. A few areas of prickly gorse and the odd unexpected precipitous drop add to the mix. We were very grateful for good, clear conditions as the broad grassy ridges with few landmarks would have made for difficult navigation in poor visibility.

With the clock already ticking we were presented with the map – the checkpoints were well distributed with no obvious pattern, so failing to spot a clear strategy we decided to just get out there and figure things out as we went along. We seemed to start slow as we slogged up the lower slopes, but one we reached the main ridge things became a more runnable and enjoyable. We realised there were some ferocious climbs out there, so we began to focus on the checkpoints which demanded the least re-ascent, for the sake of our legs.

As always, people chose a wide range of routes, and we went from not seeing anybody else for 30 minutes, to a sudden busy patch, with people darting off in all directions. This was a pleasant change from normal fell races, as the temptation to blindly follow other people is removed – although it’s always worth keeping an eye on others to get you the last few metres to a checkpoint.

We had a fairly successful trip around the checkpoints, managing to hit most of them without any major drama. We played things safe, and opted out of a risky last minute out-and-back dash to a remote checkpoint. Instead we returned fashionably early, with our points unthreatened by time penalties.

Once safely back to HQ, we even managed to sit outside in some afternoon sun as the rest of the runners came in. With everyone back, fed, and cleaned up we had a brief prizegiving. The usual navigation stars headed the leaderboard with James Logue recording his 10th win, but with Phil and Jackie running separately, we we lucky to pick up a beery prize for first mixed pair.

With the running over, and some of the prizes being an alcohol, it seemed rude not to start the celebrations early. We then made a trip into festive-feeling Sedbergh for food, more beer, and slightly surreal evening in the pub, including the unforgettable sight of Rod squeezing past the rear end of a pantomime horse on his way back from the bar. We made a staggered return from the pub (in more ways than one) for a bit of trouser-ripping action followed by a raucous late-night game of vets vs youngsters Pictionary, which the youngsters won (in a slightly suspicious manner).

Sunday morning saw a few sore heads and ashen faces, but in spite of this the sun was shining on the hills, inviting us out there to collecting the checkpoints. Me and Lee Shimwell managed a quick run back up to the highest summit in the area (the Calf) squeezing in a couple of all-important strava segments. The sunshine and crisp fresh air surprisingly worked wonders for our foggy heads.

Cheers to Bill for organising (in the middle of a house move), Ben F for providing the entertainment, everyone who contributed food and good company, and Lindsey for treating my navigation with the sense of humour it deserves. Richard Sunderland