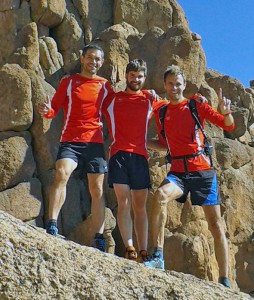 Calder Valley’s globe-trotting runners Karl Gray, Holly Page and Helen Fines have been flying the flag for their country overseas in the last few days. Gray defied sickness to take part in the World Mountain Running Championships in America, representing England in the Pikes Peak Ascent in Manitou, Colorado. The staggeringly tough, up-hill only course climbs for  13 miles to the top of the 14,115 foot peak. Gray was disappointed with his run, having been taken ill the night before. The Brighouse runner was sick during the race but toughed it out with some of world’s greatest mountain runners to finish 38th. He helped a three man England team to fifth place, ahead of Mexico, South Africa, Australia, Ukraine, Japan, and Poland. Gray completed his ascent in 2hrs 38mins, just behind England team mates Josh Tighe and Thomas Cornthwaite who finished together in 2hrs35min. USA had the first and third runners home to win from Italy, Germany and Slovenia. 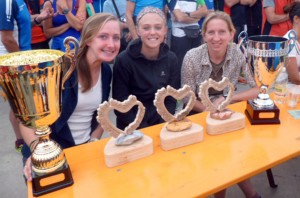 Holly, Emma and Helen looking pleased after their fine runs.

Page and Fines raced for Great Britain in the in the 3 Rifugi relay in the Italian Dolomites. Each team has three runners and the Calder Valley pair were joined by Bingley’s Emma Clayton to form a formidable trio of Yorkshire lasses. The race is run over rocky and limestone terrain, between three mountain huts.  Leg one is uphill, leg two starts with a downhill stretch and then has a section of rock face that runners climb with ladders and cables before heading to the high point of the race. Leg three is downhill only, dropping 900 metres. The British trio put in a blistering performance to finish in 1,34.37, 30 seconds behind the winning Italian team who must have had the benefit of local knowledge.

Calder Valley’s Alistair Morris and Barbara  Lonsdale were eighth in the World Series itera adventure race in Wales. The five-day contest, over 400 miles and with only seven hours sleep,takes place in the highest and wildest parts of the country.  Many international teams take part. Morris and Lonsdale,  racing with team Ellis Brigham, got trapped by rising flood waters and had to take a detour through deep bogs and forest. Valley’s Phil Scarf, racing for the Endurance Life team, was an impressive sixth. High winds and heavy rain played havoc with the event. 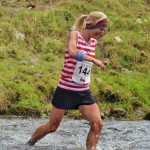 On Saturday prolific racer Lindsey Oldfield came second in the Gargrave Show Fell race. She looks to be embracing the fun of fell running as she crosses the stream.

Joe Crossfield, Alex Whittem and Joe Washington took all three podium places at last week’s Crow Hill Reverse Fell Race as they swept to victory in this local race. The race is organised by local physio Ali Mills, with all proceeds going to ovarian cancer and since she has taken the helm the race’s original route has been run in reverse – from Mytholmroyd to Crow Hill’s understated summit marker high above Midgley Moor and then back to the start through Red Acre Woods. In beating Whittem, Crossfield was also able to take Whittem’s course record as well as club bragging rights, coming home in just under the half hour (29mins 53secs) – pretty swift running for five miles of off-road running with 1000 feet of climbing! Lindsay Oldfield continued with her winning streak on the moor where her dad, Steve has been such a prolific racing maestro. Joe and Lindsey were also “crowned” King and Queen at the summit of Crowhill for being the first to the top.

On Wednesday night ladies captain Helen Buchan took her first win at the tough short fell race of Whittle Pike over in Rossendale. The Borrowdale race at the weekend doesn’t seem to have taken too much out of her as she raced to victory in just over 55 minutes. Her team mate Jackie Scarf took 1st lady v50 and second spot only a minute or so behind.

Calder’s mountain running protege Max Wharton placed fourth in the World Mountain Running Trials at Sedbergh on Saturday and this will be enough for the Heptontstall based star to pit himself against the very best mountain runners in an uphill only race in Tuscany in September. 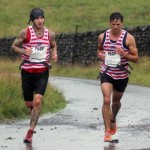 The “Wedding Crashers” on action .. photo courtesy of Trawden A.C. 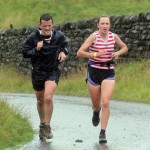 Holly and Mark do battle in the rain. Photo courtsey of Trawden A.C.

At Sunday’s Boulsworth Hill, two of Calder’s up and coming stars Joe Washingon and Johnny Helliwell, ran under the club name the “Wedding Crashers” to celebrate their pending nuptials. Both men finished with exactly the same finish time, although the results show them as finishing in third and fourth. The two men in front of them also repeated the same feat with Jacob Boyle of Clayton clocking the same time as his younger brother Joshua Boyle of Hyndburn.  John Lloyd and Mark O’Connor of CVFR both made it into the top ten, as did Holly Page who walked away with top spot for the Women.  This was another excellent run from Page, who beat Sarah Tipler of Barlick and Glossopdale’s Catlin Rice with some room to spare. 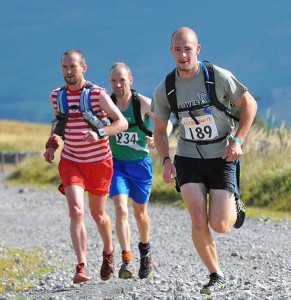 Ian warming up for the win at Bradwell. Photo courtesy of Sunday Sports Photography.

Finally, Calder Valley’s own version of the duracell rabbit, Ian Symington, took on the challenge of the Tour of Bradwell, a tricky navigational event set in the Peak District and taking in the Hope Valley and Kinder Moorland.  Symington only really gets into his running after he’s been out for four hours and he comfortably won the 51 km challenge in just over 5 hours, a full 15 minutes clear of second placed Ken Sutor.  John Minta, Rod Sutcliffe and Linda Murgatroyd were the other successful Calder contingent who completed this cracking challenge.

A special mention must go to Calder’s Steve Smithies who raced 3 nights on the trot (and he didn’t even get lost) doing Crow Hill followed by Whittle Pike and he then made up a 3 man team to do the local challenge of Scammonden Steps relay. Well done that man you are obviously over the knee injury. 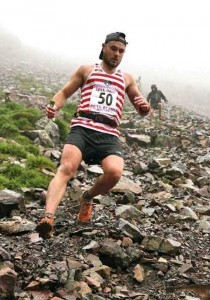 Timbo on his way to a fantastic 7th place. Photo courtesy of Andy Holden

Borrowdale fell race has been one of the benchmark Lakeland fell races for many years. The great and the good have taken part and tested their skills over the 16.8 mile/ 6562ft route which takes in the majority of Borrowdale’s majestic peaks, including Scafell Pike and Great Gable. It’s tough at the best of times but throw in rain, mist, and thickening clag such as was evident on Saturday, and you have a severe test of the fell runner’s craft.

Hats off then to the clutch of Calder Valley runners who tackled the beast head on. Cold, wet and miserable is no place to be atop a Lakeland peak dressed in no more than a Ron Hill singlet and a pair of skimpy shorts, but Tim Ellis, the Bard of Egerton, showed his fortitude to compose a poetic run with a superb 7th place. Although no match for runaway winner and current nonpareil Ricky Lightfoot (3:03:16), Tim was part of the second group comprising several of the other leading stars who fought valiantly round the treacherous route to finish in the splendid time of 3:17:19.

One of the stoic runs of the day came from Garry Traviss as he chases V50 points in CVFR club champs. He placed a fantastic 67th in a time of 4 hours 7 minutes and must sneaked in front of racing supremo Darren Fishwick of Chorley. Pretty amazing when you consider Garrys injury worries of cartilage-less knees and hips. Ladies’ skipper Helen Buchan led the Calder ladies home and yet again showed her resilience in this marvellous season of hers with a super run of 5:04:57. Holywell Green’s fell running machine, Dave Culpan girded his loins for a brilliant run, overcoming atrocious conditions and the encircling elements with a heroic run to come in 265th and add Borrowdale to his burgeoning list of races completed. When it comes to races completed, few can match Calder’s Mike Wardle and Rod Sutcliffe, who chalked off yet another Lakeland race in tandem, demonstrating their enviable fell craft and navigation skills to conquer the wind and rain.

A measure of just how perilous such races can be was evident when an Otley AC runner slipped 60ft down a gully as he descended from Scafell Pike. Battered and badly bruised he had to be ferried off the mountain by the mountain rescue services and we hope he is ok. 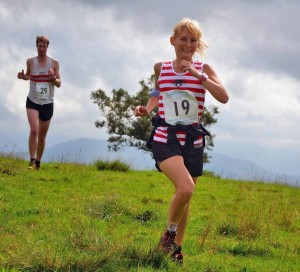 Elsewhere, Calder’s scouting network can be chuffed with their recent acquisition with Lindsey Oldfield winning last week’s Hellifield Gala race near Settle. Lindsey, a more than welcome addition to Calder’s high profile female squad, has wasted no time in settling into her red and white vest and was a comfortable winner of the ladies’ race.

Closer to home and in less hostile surroundings, Calder’s John Lloyd launched yet another new race in his Cannonball Events programme, with the first running of his Cock Hill Woods race out of the Roebuck pub near Todmorden. Calder’s young star Max Wharton romped home to claim another senor victory and expect to see his name more and more as he relieves himself of the shackles of youth restrictions. He really is some sight in full flight and he made light work of the picturesque 3.5mile route. Calder’s Joe Washington was on the podium once more in 3rd place as he continued his rampant recent form.

Fancy a go yourself? Visit www.cvfr.co.uk for further information.

Open to club members and friends only!!! 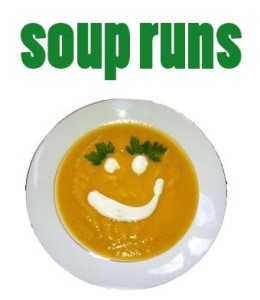 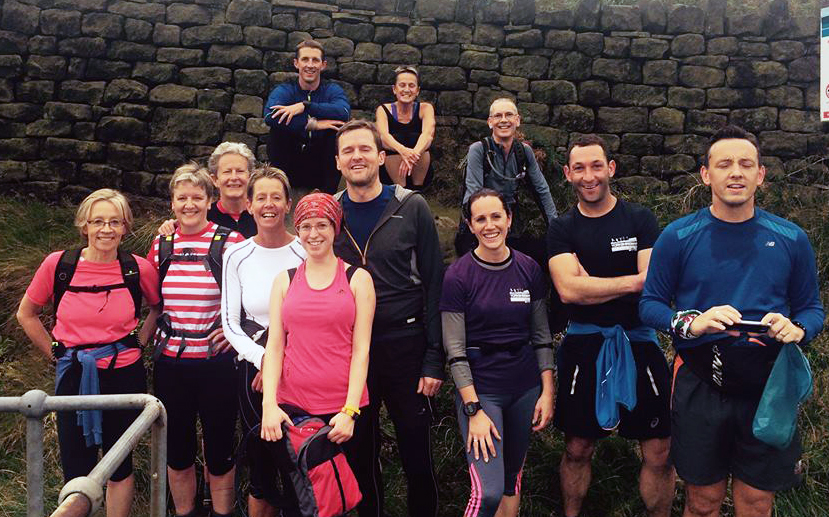 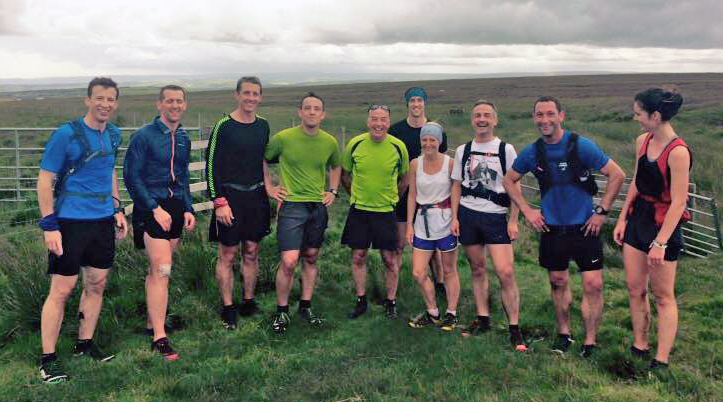