Calder Valley’s popular ‘Midsummer Madness’ fell running event was blessed with glorious sunshine this weekend with Calder’s James Logue yet again taking the crown for his combined score over the three days. The returning Logue left little to chance with 2nd 1st and 2nd respectively across the Wicken Hill Whizz, Reservoir Bogs and Tom Tittiman races.

The event, expertly staged by Calder guru Bill Johnson combines two short, steep and quick races, Wicken Hill Whizz and Tom Tittiman, with the more sophisticated ‘Reservoir Bogs on the Saturday. This gem of a race combines map reading and control finding, normally over a distance of about 9 miles, and invariably sees competitors taking in all parts of Midgley Moor – some of those reluctantly, and some more than once! The event has become popular with clubs as far away as Essex and the Midlands who come to savour our world class scenery and fell running.

In such an environment Logue is unsurpassed and demonstrated his prowess with a masterful display, beating close rival and fellow map-maestro Simon Bourne by nearly eight minutes into second place – a hugely authoritative win. In the ladies race, Queen of the contours Jackie Scarf showed the men how to read a map and to come home in a brilliant twelfth place.

Both led their respective CVFR team mates to the team prizes, the bare chested Mark O’Connor making up the men’s trio and Rachel Johnston and Joanna Marshall joining Jackie on the podium.

Friday’s race saw the second win a week for local physio Joe Washington, who has been in blazing form since his winter break. The Ripponden based speedster can take great heart in beating Logue into second place and looks in super shape as the summer months approach. The ladies will be hoping for a glimpse of his rippling muscles as the sun continues to shine. Mention must also go to Rob White, Calder’s Under 23 star who carded an excellent 3rd place.

In the ladies race, Calder’s new signing Lindsey Oldfield, daughter of local legend Steve, showed she’s no slouch herself with a flying run to finish 19th, just ahead of the rampant Helen Buchan in 23rd, the Calder ladies’ captain who is having the season of her life.

The heat was on in every sense for Sunday’s climax with the mercury well into the 80s and we were treated to a guest-star appearance by reigning BOFRA champ, Tod racing snake Shaun Godsman. Shaun is rarely bettered in races like this and hit the afterburners for a brilliant time of 27:24, Logue in second and Washington in 3rd.

Gayle Sugden stemmed the Lindsey Oldfield tide to take the ladies race with a very quick run of 32:30, with Lindsey coming in second in 33:33. It was also good to see Anne Johnson back in action after a long and frustrating lay-off with injury. A thoroughbred to grace any field, Anne showed that class never leaves you with a composed run of 35:18 to come in fourth lady and cement Calder’s team prize.

Special mention must almost go to Blackshawhead running man Ian Symington who competed in the mammoth Scottish West Highland Way race, a snip at 95 miles and 14,000ft of climb. Some people don’t go that far on their holidays.

It was celebrations all round for not only race organiser Dan Taylor on his forth coming wedding but also for Calder Valley’s Joe Washington and Lindsey Oldfield on their wins at the aptly named “Bride Stone” Rocks race. The 60 runners, mainly made up of red and white stripes, started near the Calder Way footpath and climbed steeply up the hill before traversing Whirlaw Common onto Eastwood Road, past the bride to be marshalling in all her finery at Bride Stone Rocks before plunging back down into the valley and returning to the field where it all started. The first 3 were very close together at the finish wih Joe taking the race in  37 mins 27 seconds but hot on his heels 8 seconds later was Chris Smales. Only 2 seconds further adrift was prolific racer Darren Fishwick. With Calders Mark O’Connor in 5th and Giles Simon 7th the mens team prize was secure. In her first appearance for Calder Valley Lindsey Oldfield had a convincing win in 44 mins 39 secs  and was over a minute in front of second place Tod Harrier Rebecca Patrick. Helen Buchan had been chasing Lindsey all the way but with head in race mode ended up taking a wrong turning.  She still secured 3rd place but was less than impressed with herself when she finished. This did gives her club mates an opportunity to take the mickey at her mistake … They were getting one back after she given them some grief at getting lost in the mist in Ireland … was it misty or foggy on race night? Or was the sun so bright it dazzled her!!!. Again with Linda Hayles as their 3rd counter the ladies collected the team prize. 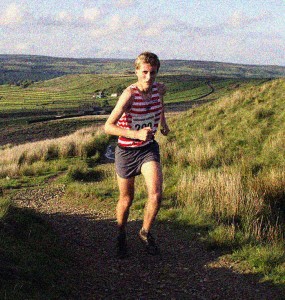 Joe on his way to winning. courtesy of Tod Harriers,

Calder Valley Fell Runner did the 1 – 2 – 3  at the local Hebden Bridge Fell race organised by Tod Harriers. The two Joes, Washington and Crossfield did battle and with a blistering start Washington took the lead. With his down and in race mode he unfortunately missed some of the flags and did a slight detour off route. Crossfield did see the flags this time came home to take the win in 47mins 44secs. Washington battled hard back through the race field but had to settle for second place being 3 minutes adrift of his team mate. Mark O’Connor had the run of his fell career to place a fantastic 3rd (51mins 06secs) and this easily secured the mens team prize. Not to be outdone Womens captain Helen “Buckers” Buchan led her team mates of Gillian Wisbey and Jackie Scarf to the women team prize. 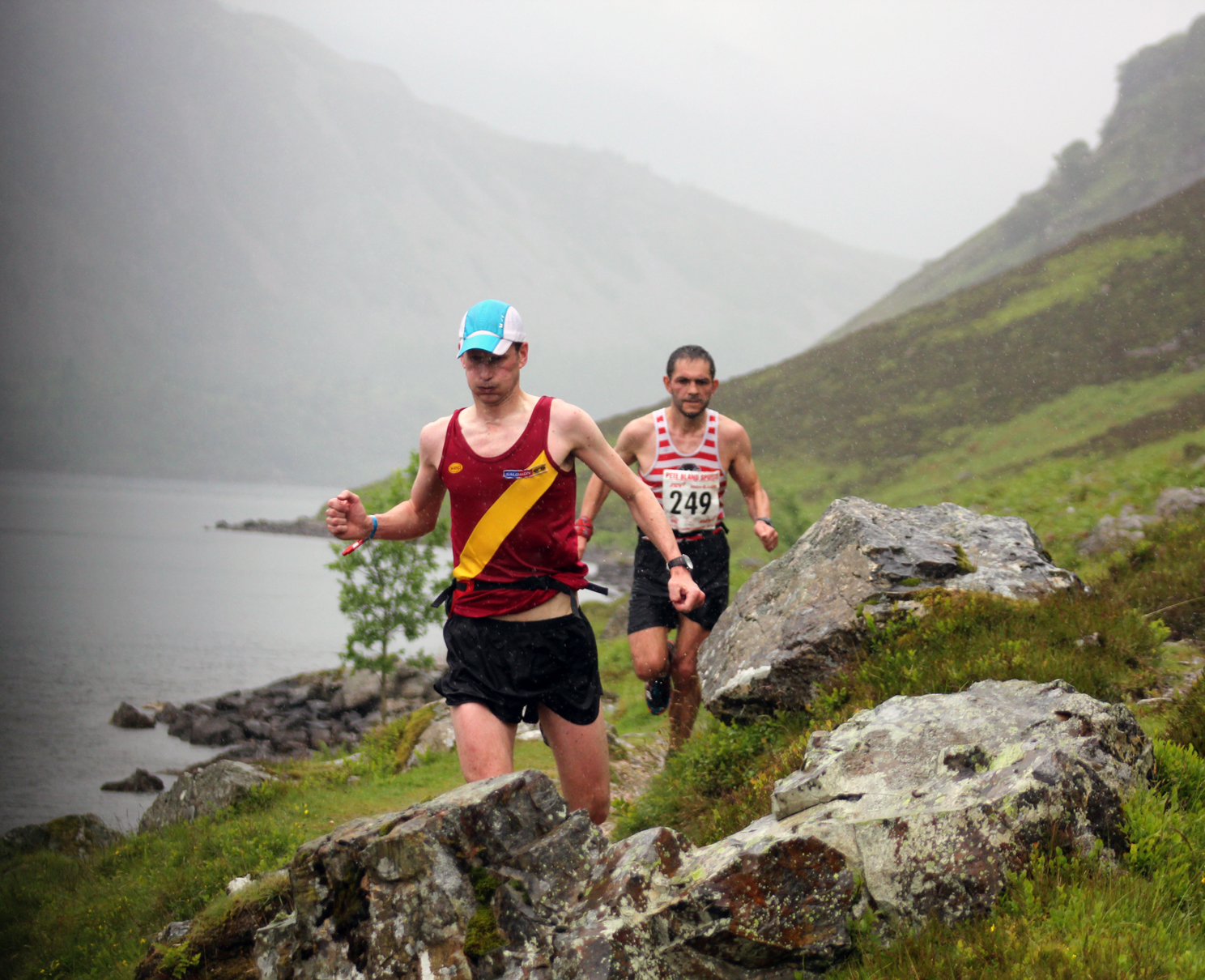 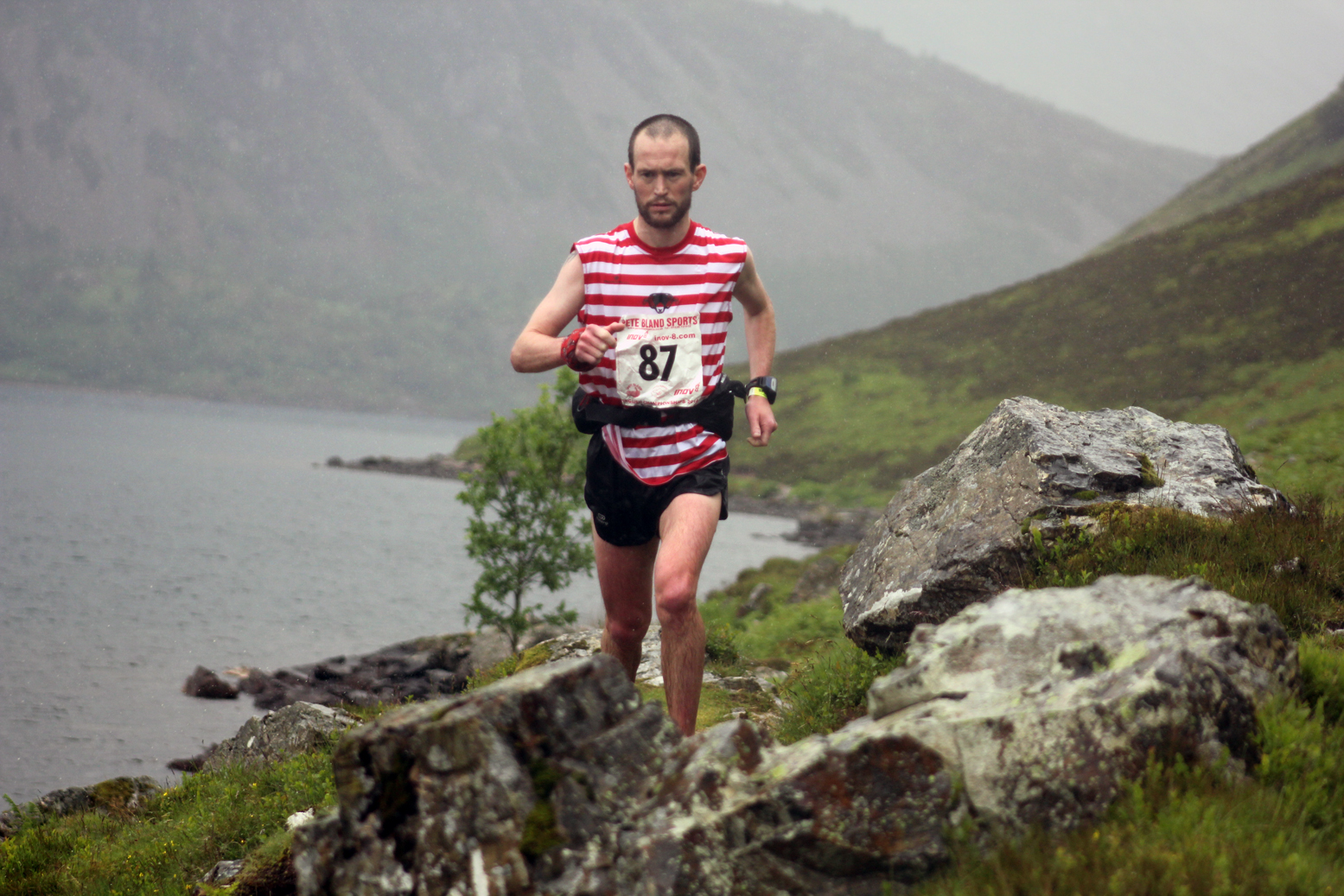 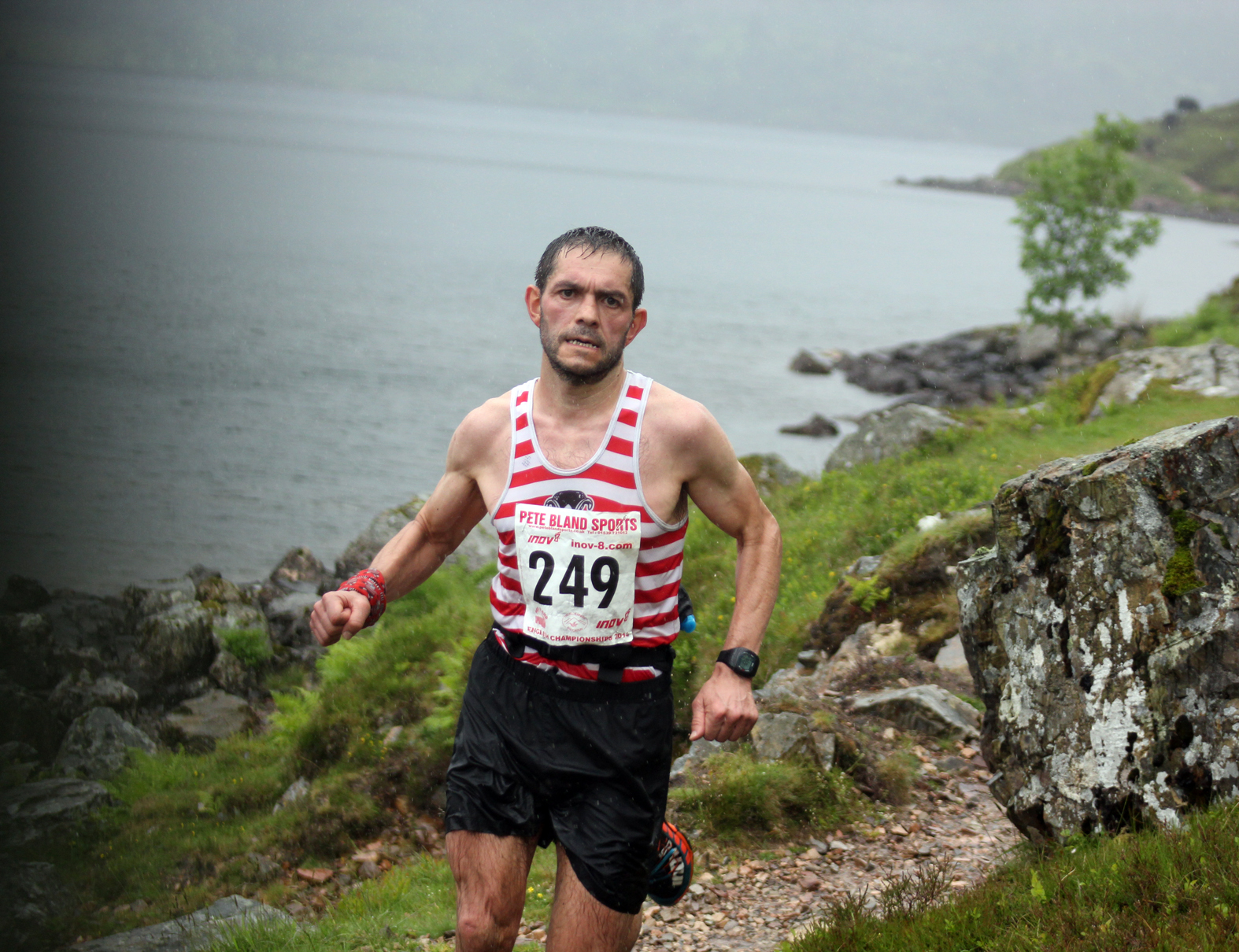 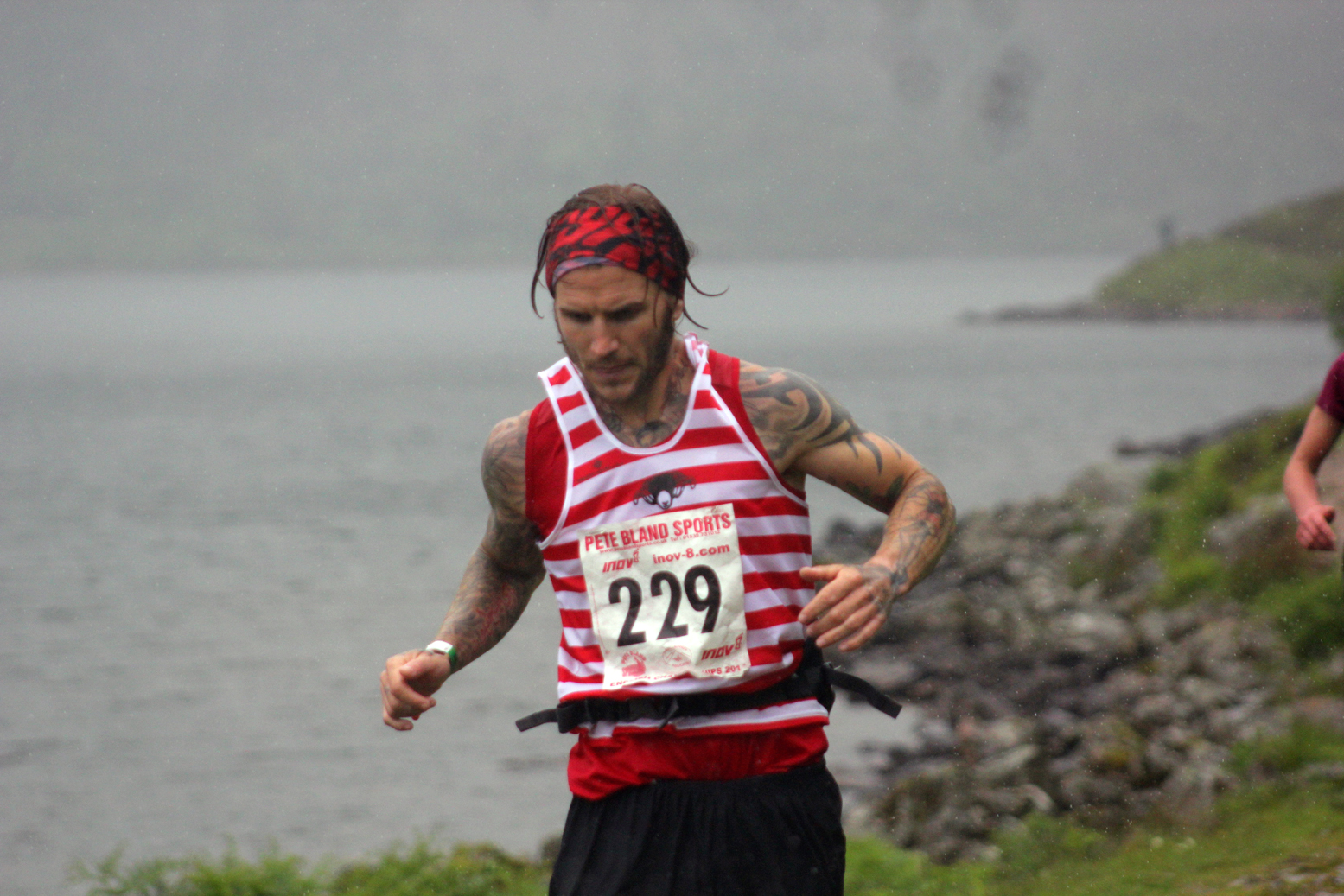 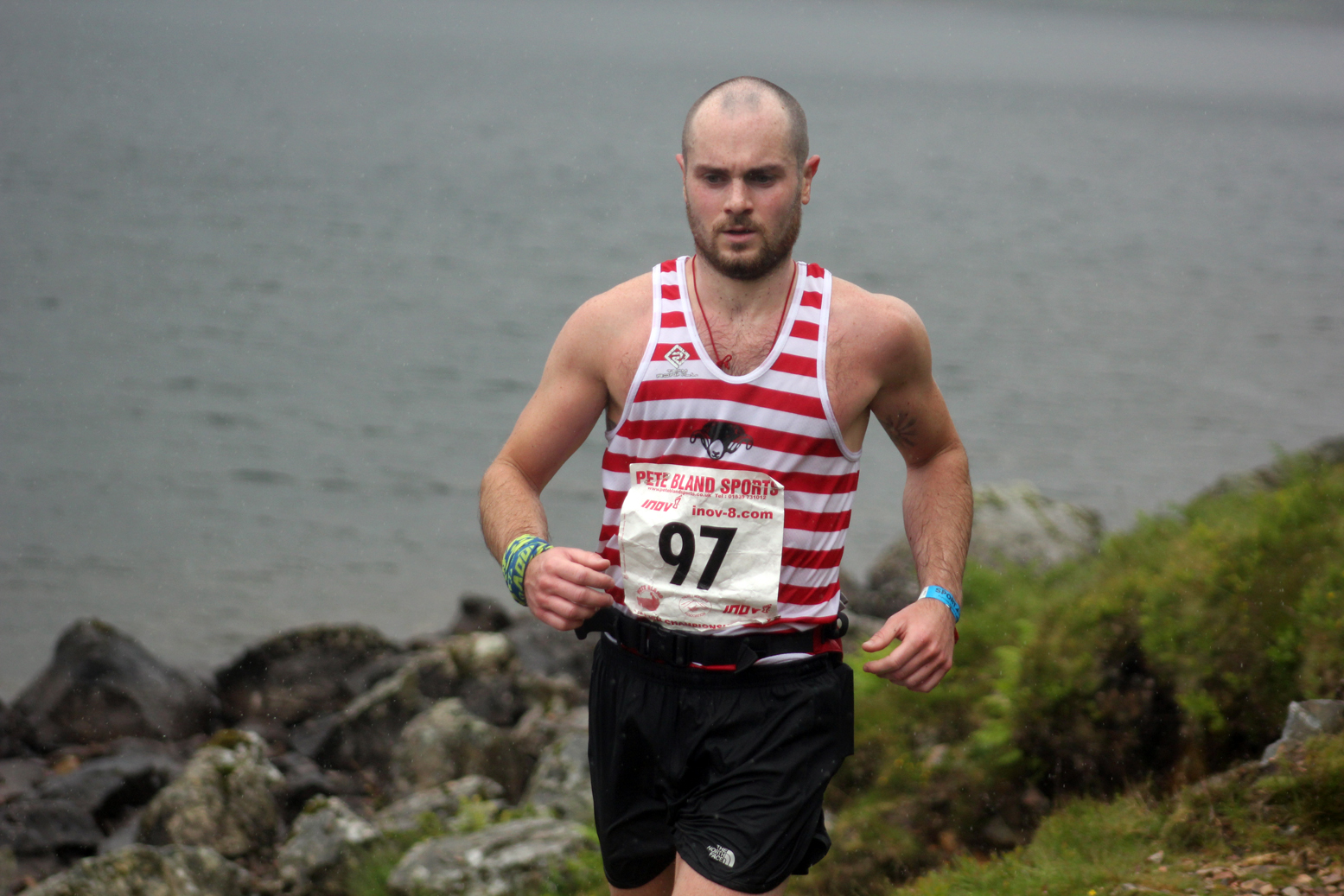 Ennerdale
Calder Valley FR competed at the highest level in more ways than one as they headed off to some of the UK’s loftiest locations.
Organisers of last weekend’s Ennerdale race, the third in the English Fell Running Championship, were forced to amend the 21 mile/7500 feet route to a 21 mile/4500 feet circuit. That was to avoid exposed ridges threatened by lightening strikes.
Runners met under a gathering storm with torrential rain and high winds forecast.
Calder Valley’s legendary Karl Gray still brought thunder to the new route. His lightening pace was too much for the likes of former champions Rob Jebb and Morgan Donnelly.
In a field full of the UK’s classiest fell runners, Gray was always in contention over the low col to Crummock Water and Buttermere.
As the race climbed 1100 feet over Scarth Gap, he pushed three-times British champion Jebb into third place, pursuing Rob Hope down to what is probably England’s most remote youth hostel, Black Sail in Ennerdale.
The Jebb-Gray–Hope battle continued on the 1100 feet climb to just below Green Gable, after which they skirted below the summits of Great Gable and Kirk Fell and then dropped back down to the youth hostel. The top three were locked in a sprint finish along an eight mile run-in along Ennerdale valley bottom and although Gray was chasing Hope down he couldn’t quite overtake him and finished only 12 seconds behind to take a memorable 2nd place.
A host of Calder runners followed Gray, led by Tim Ellis, Ian Symington, Johny Helliwell, Bill Johnson, Garry Traviss and John Minta.
Helen Buchan bravely completed with a gashed shin after falling on rocky path.