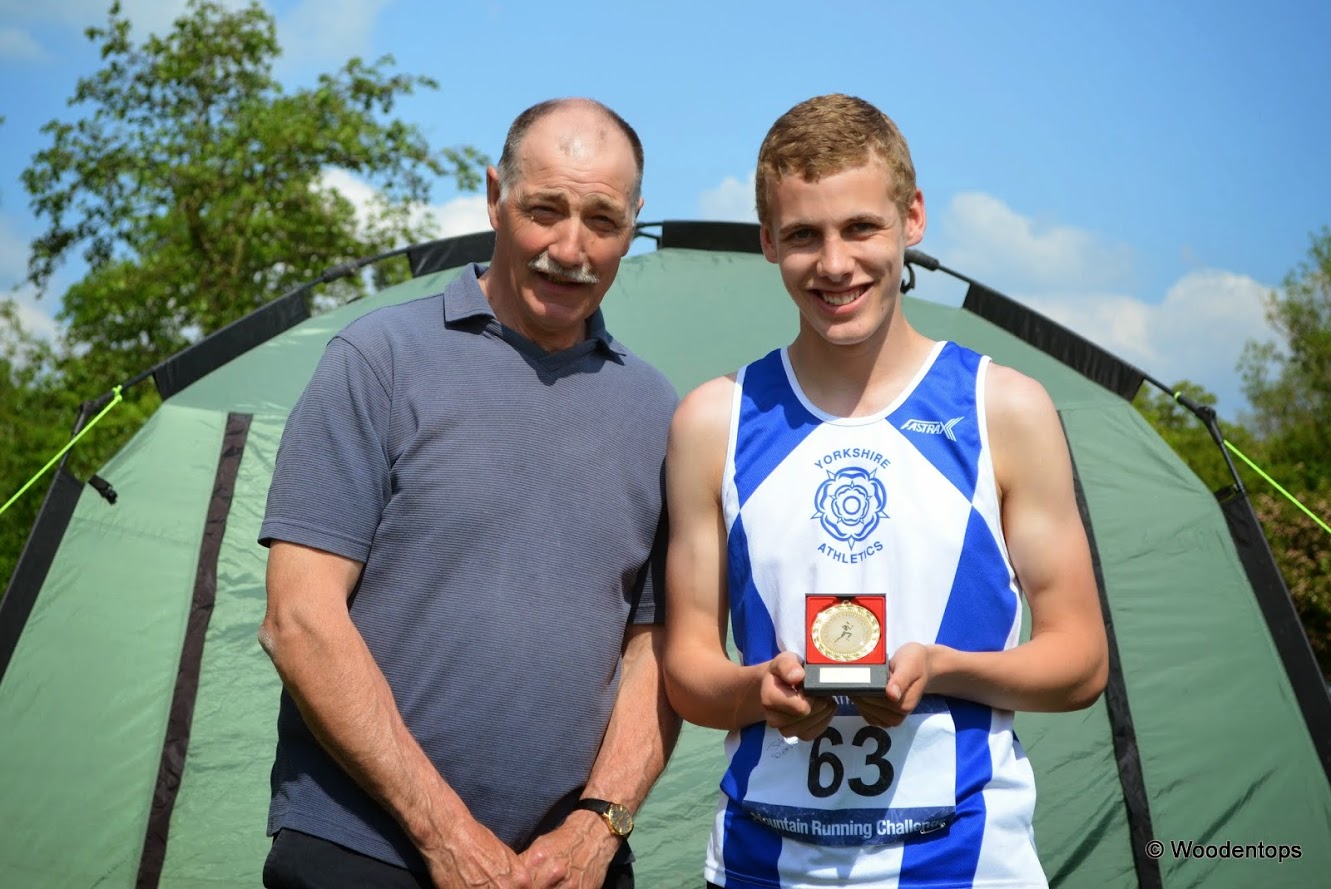 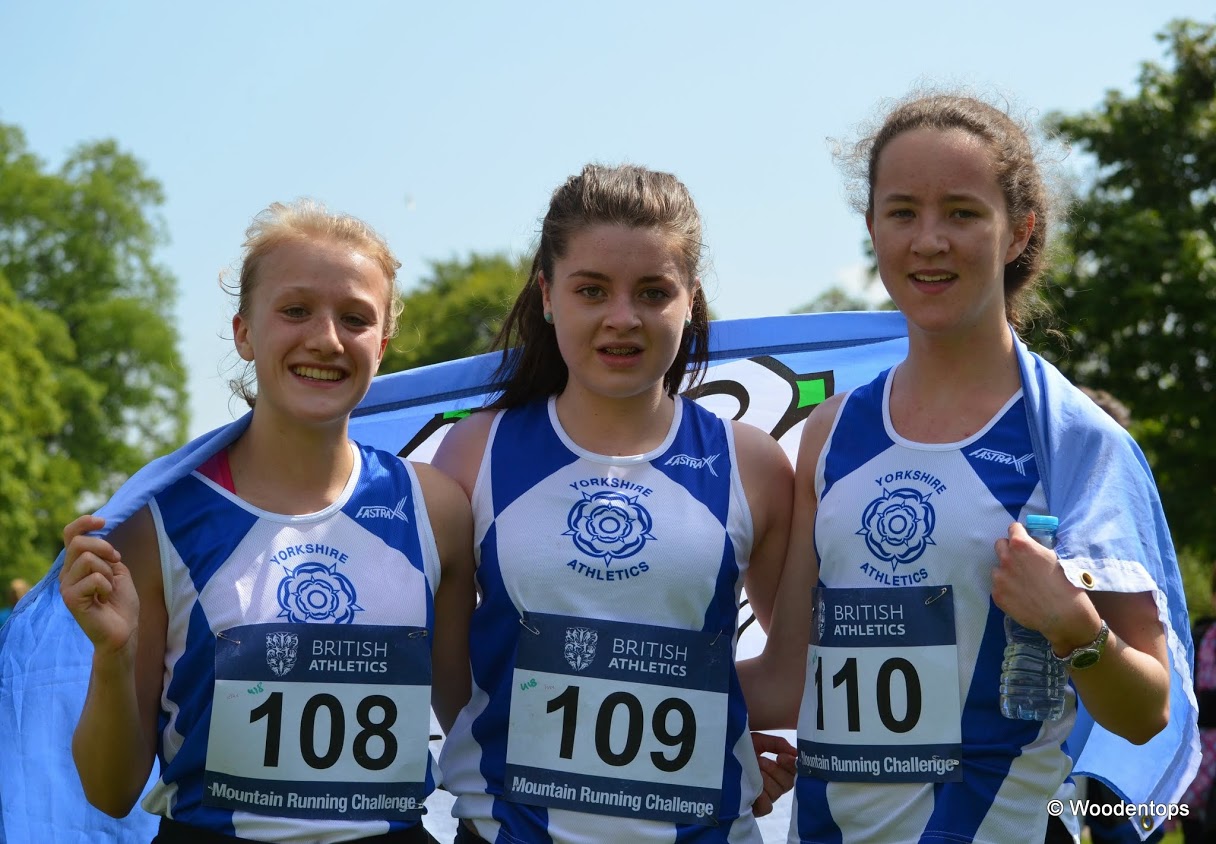 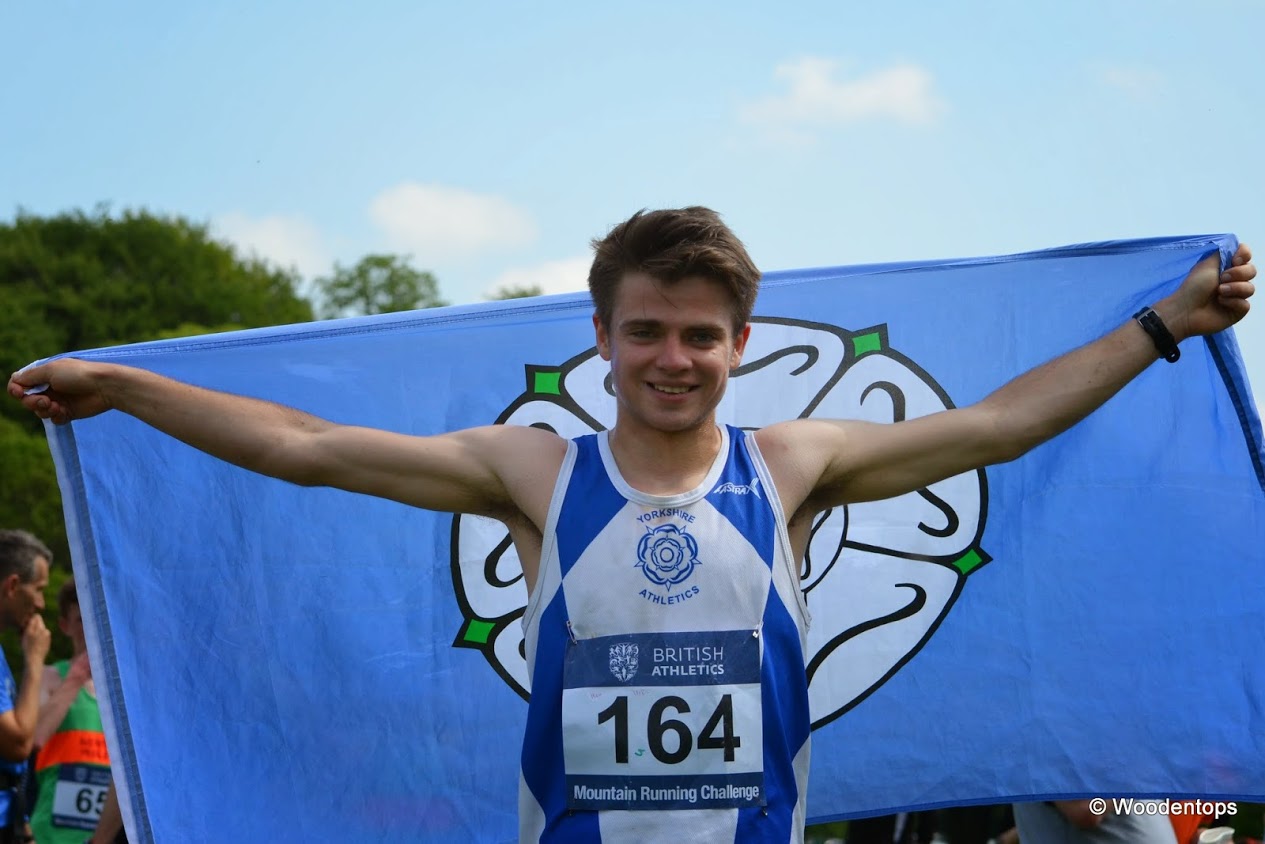 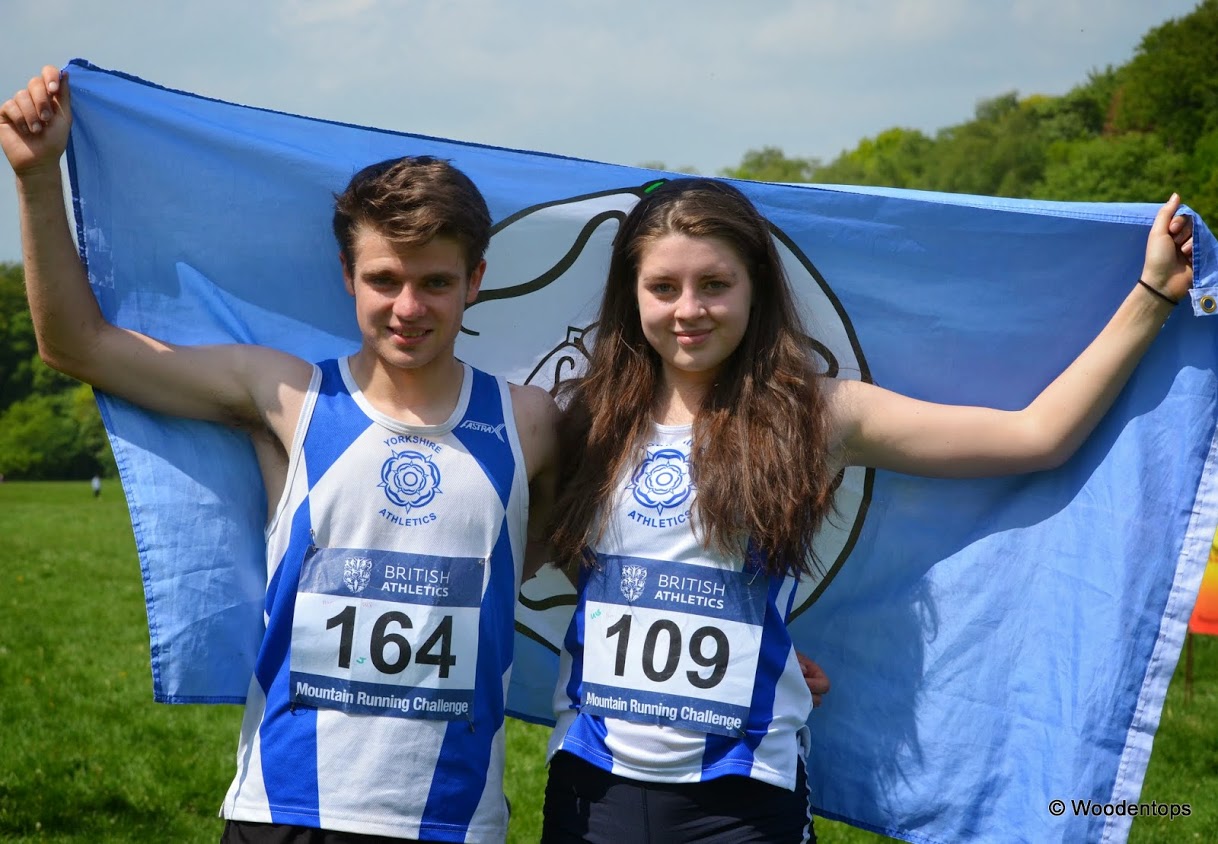 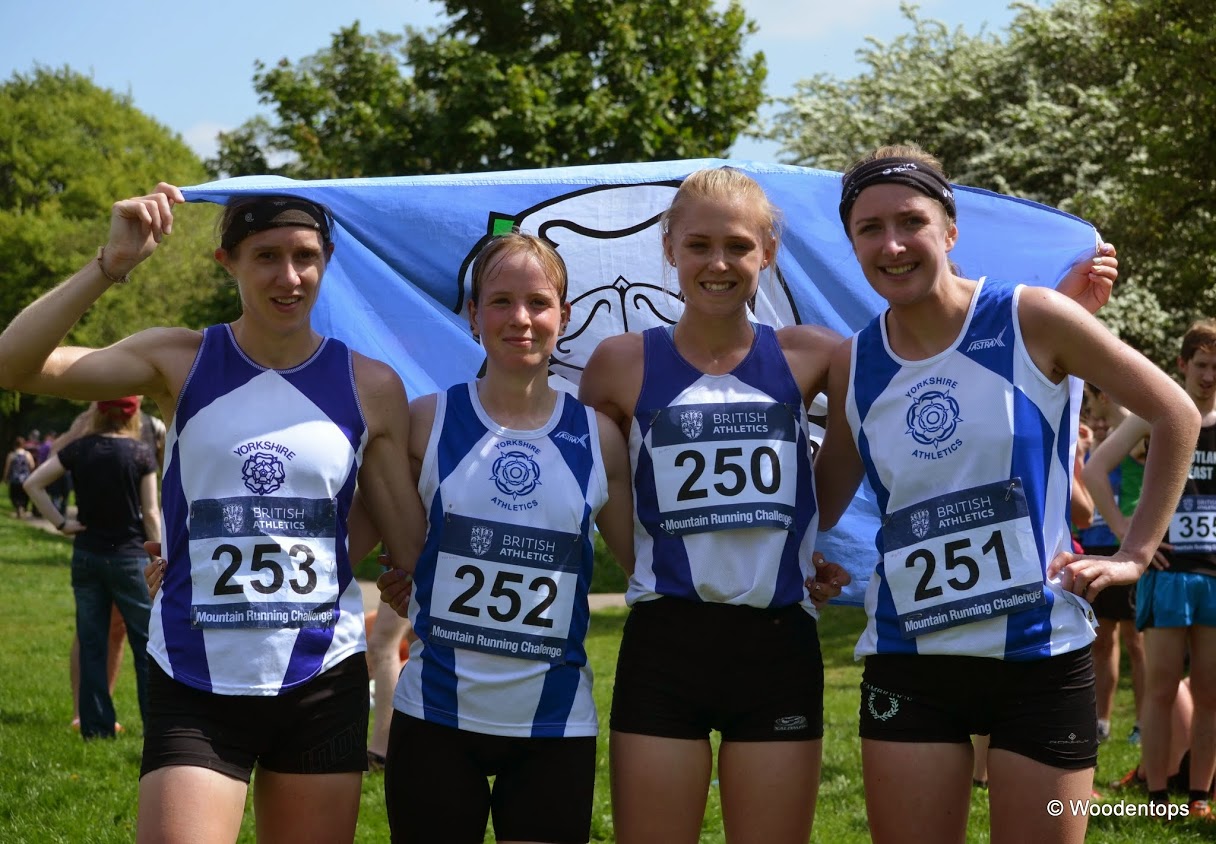 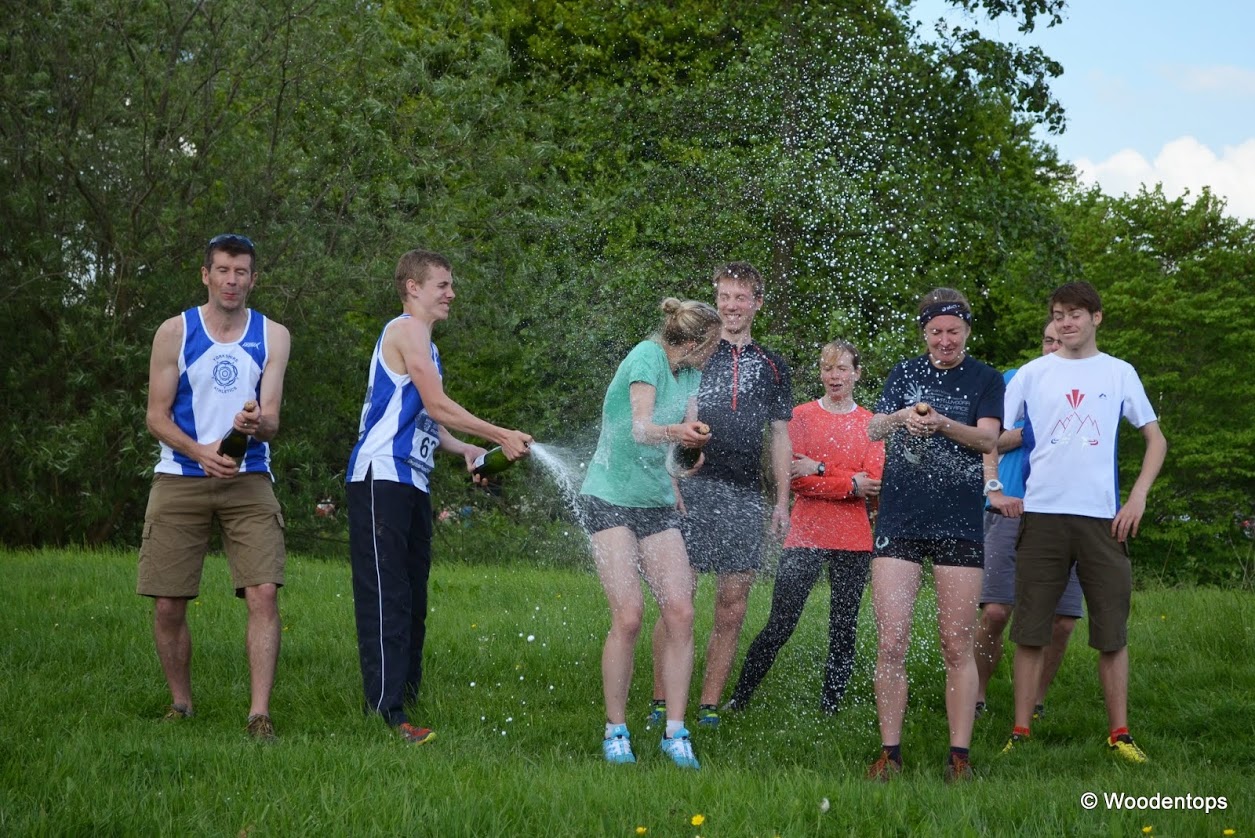 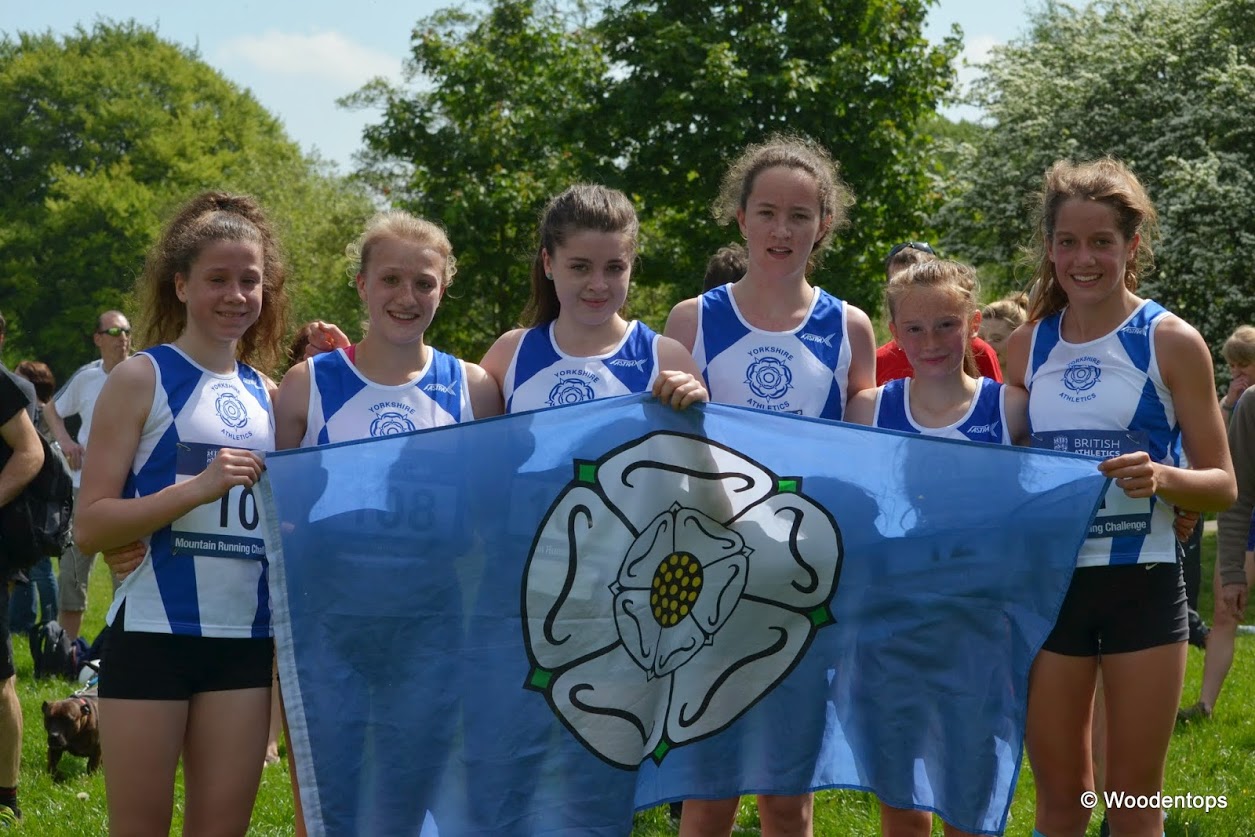 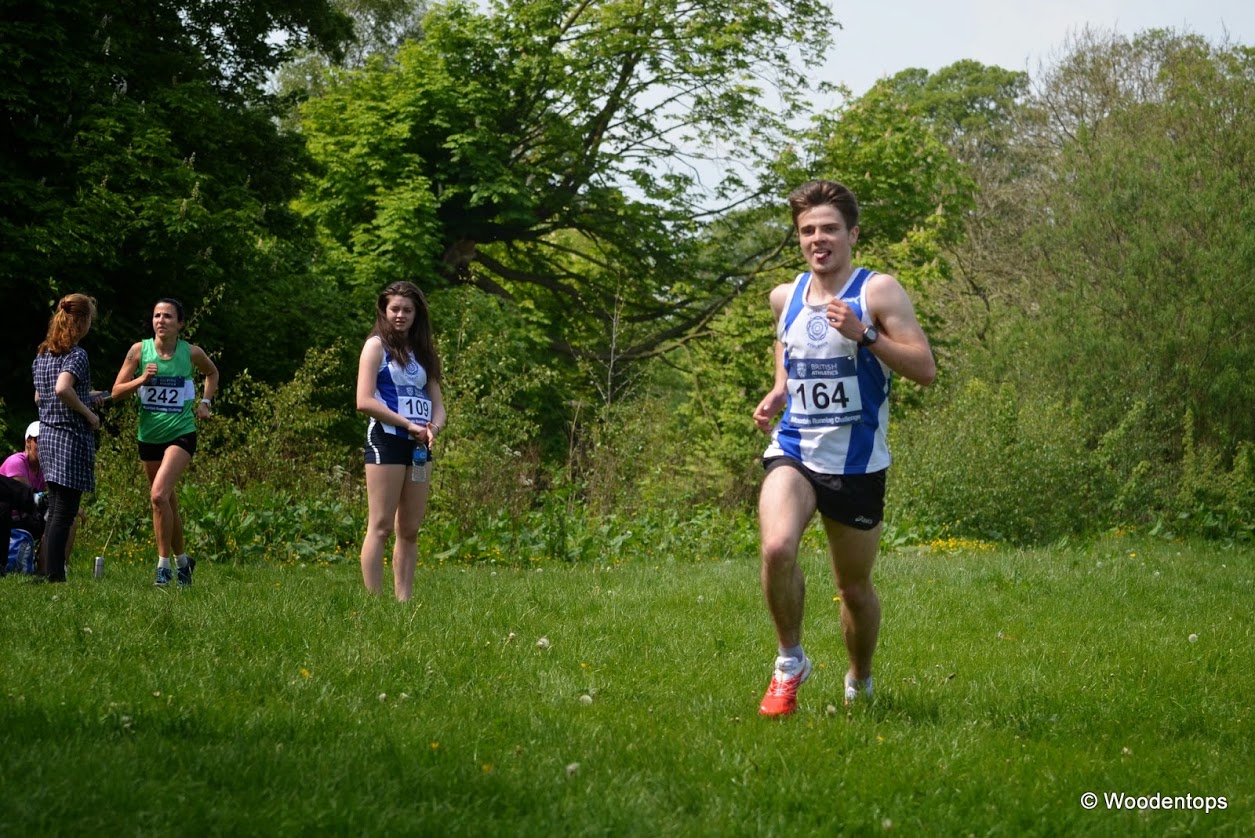 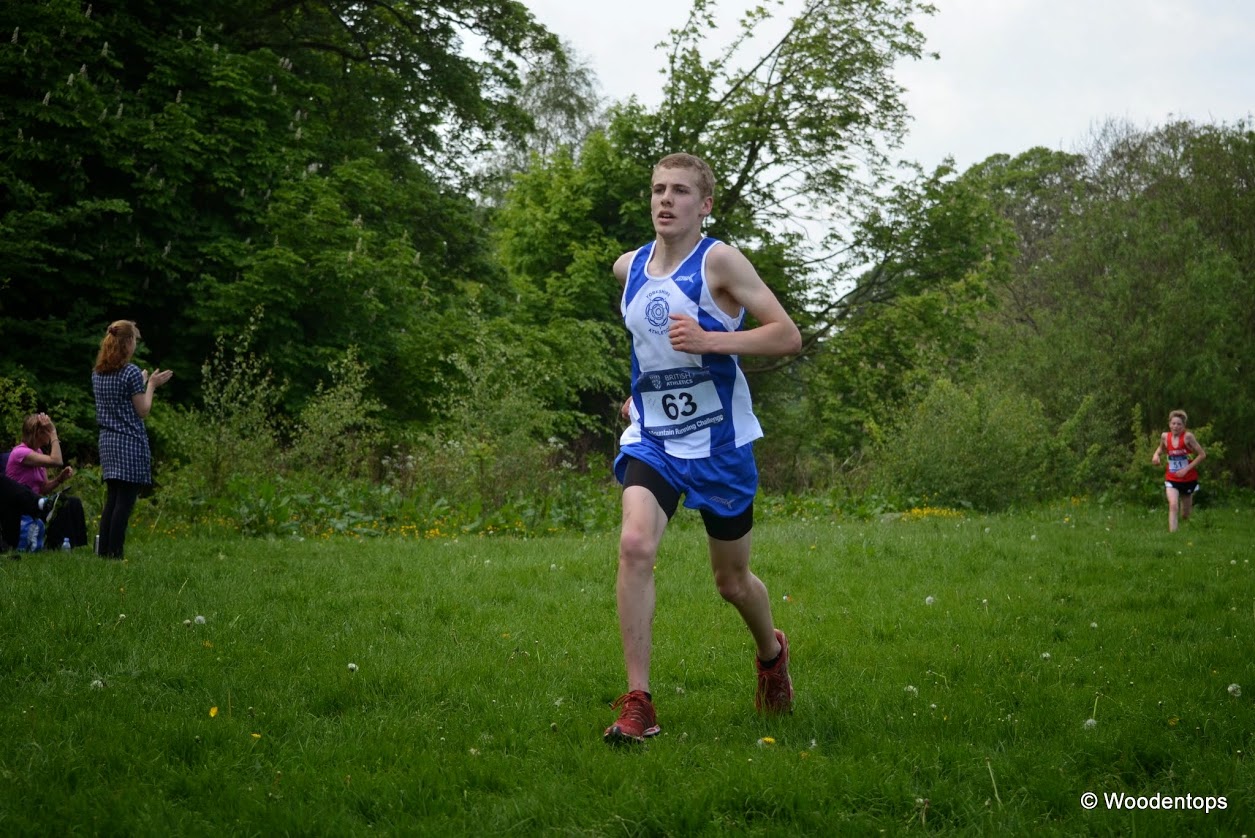 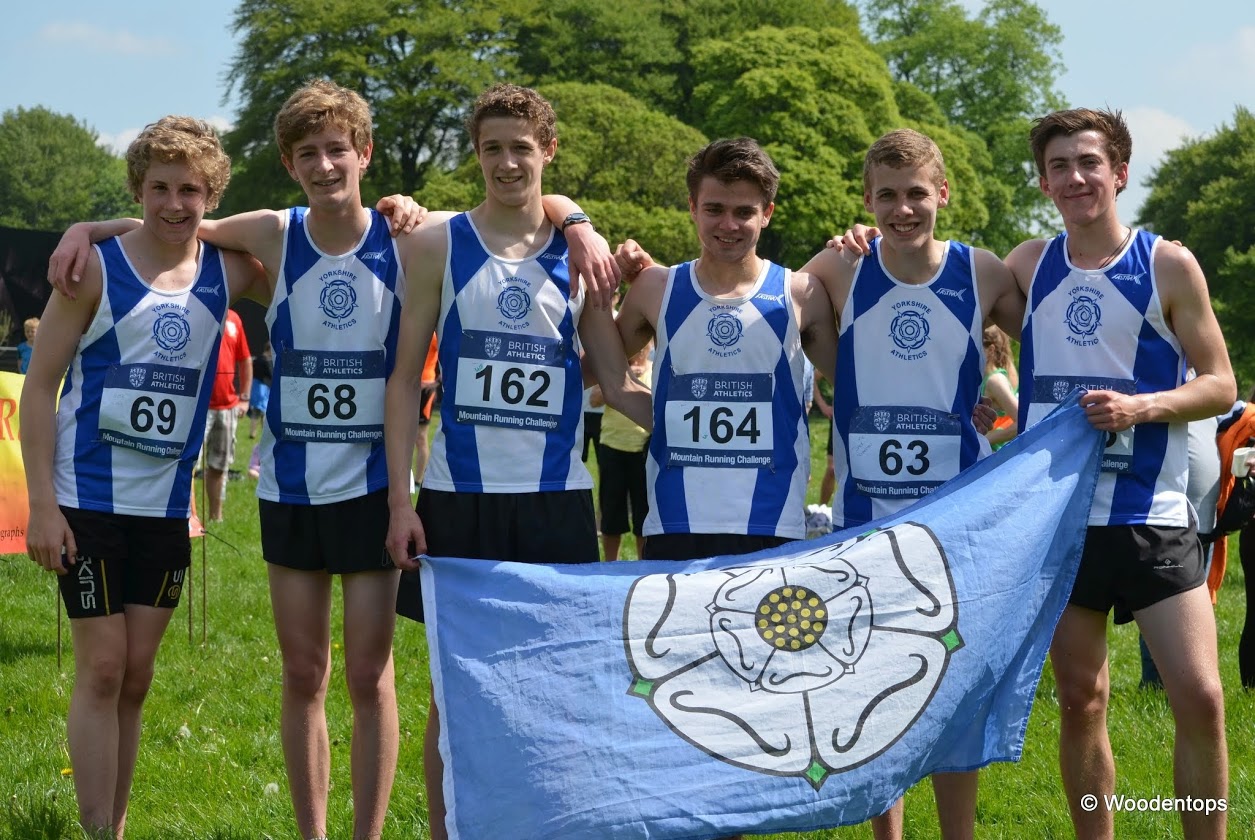 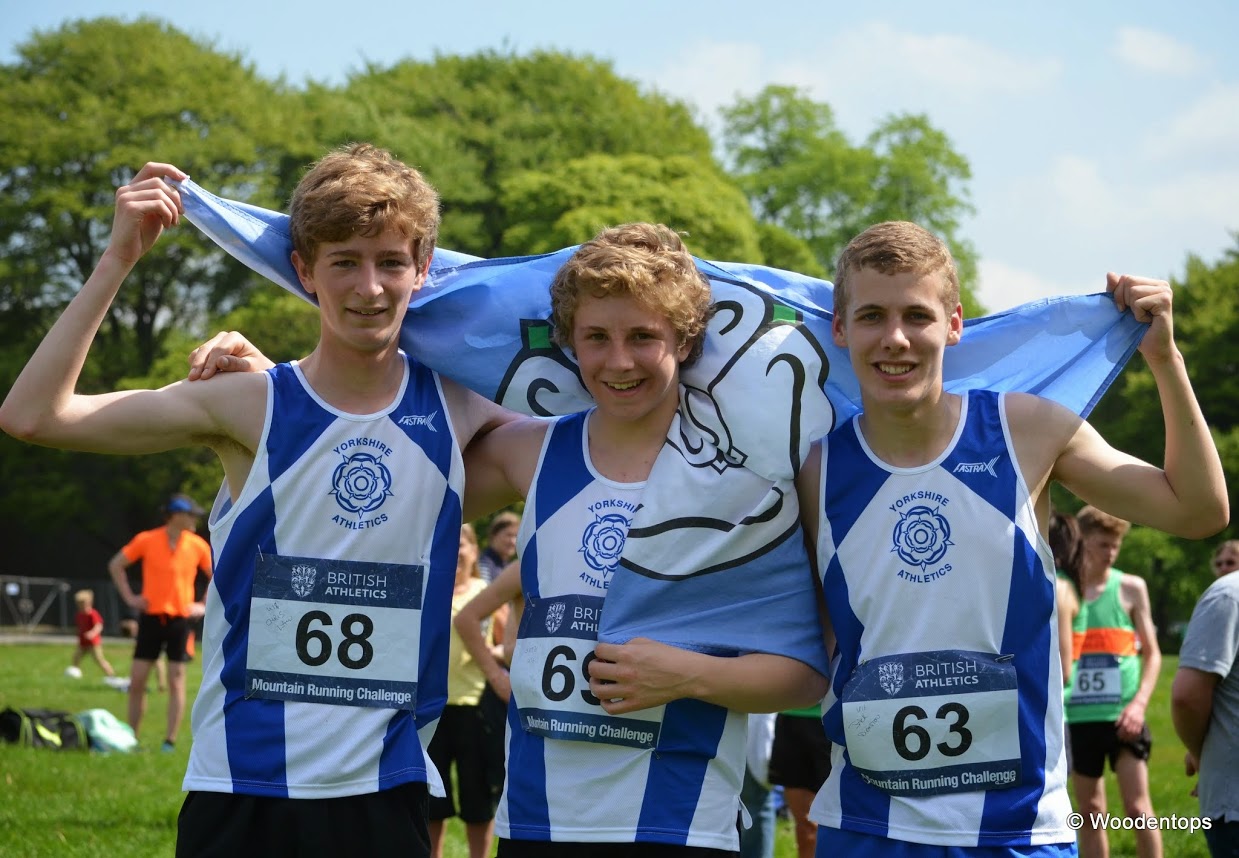 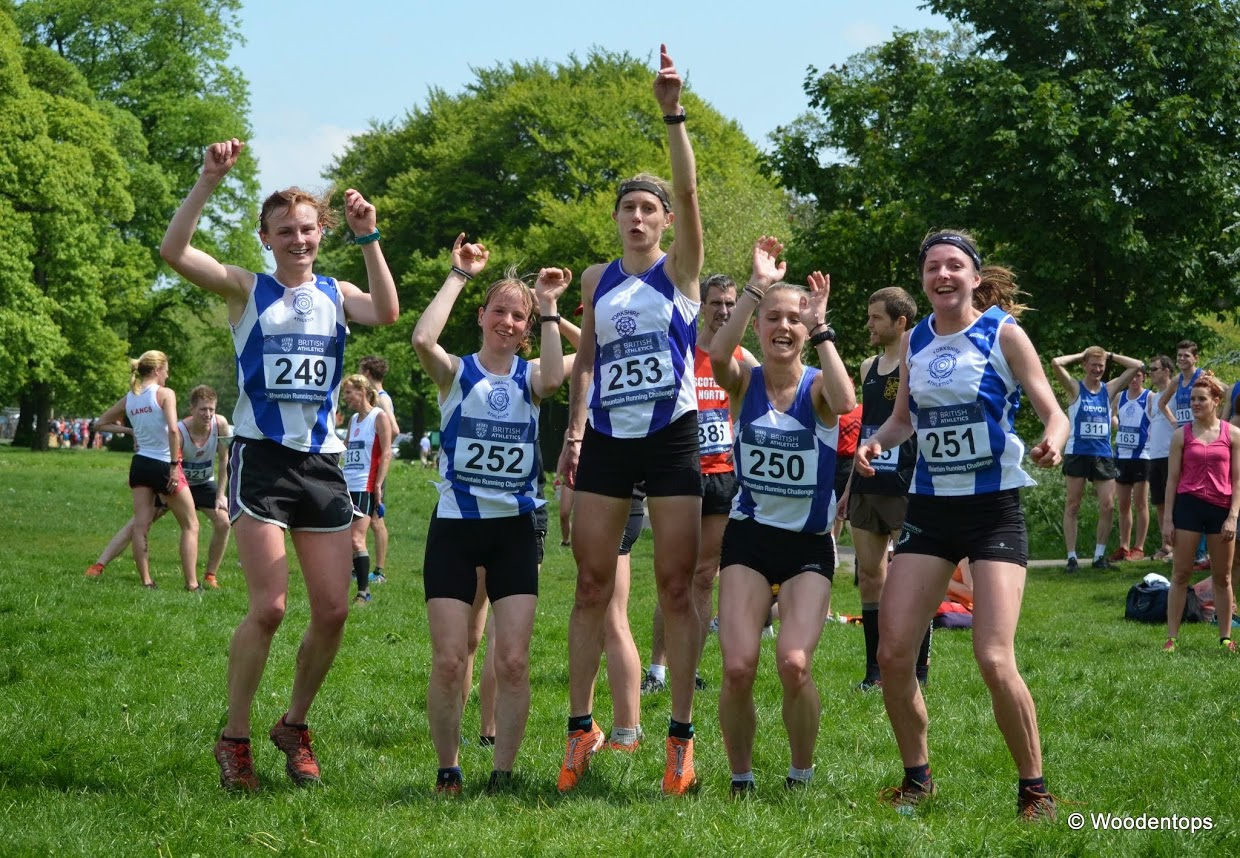 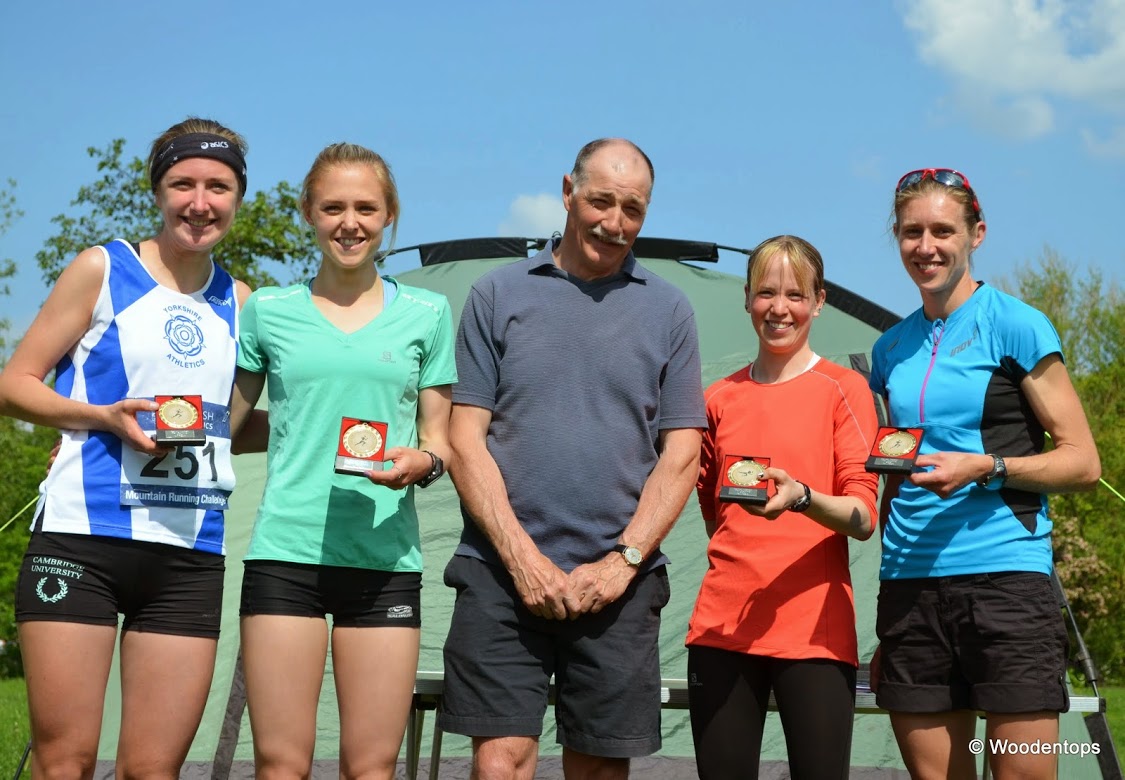 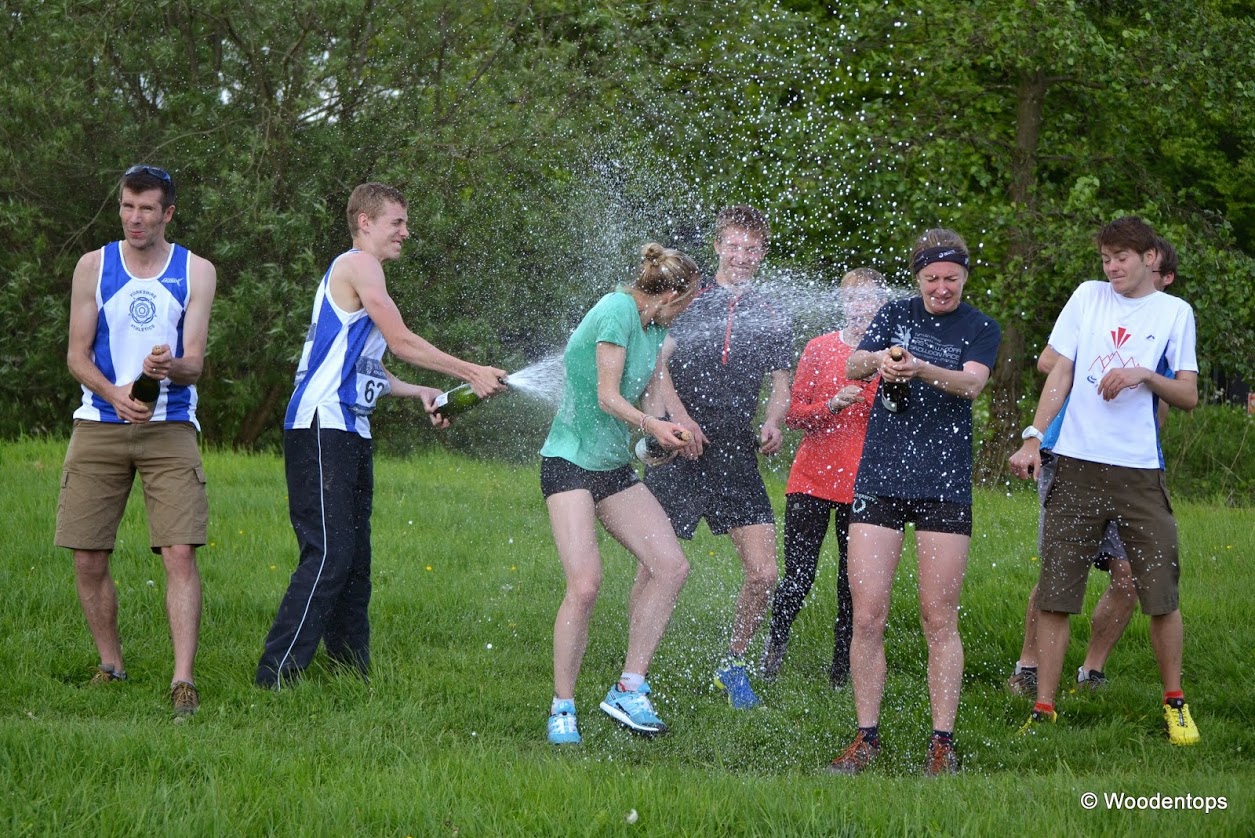 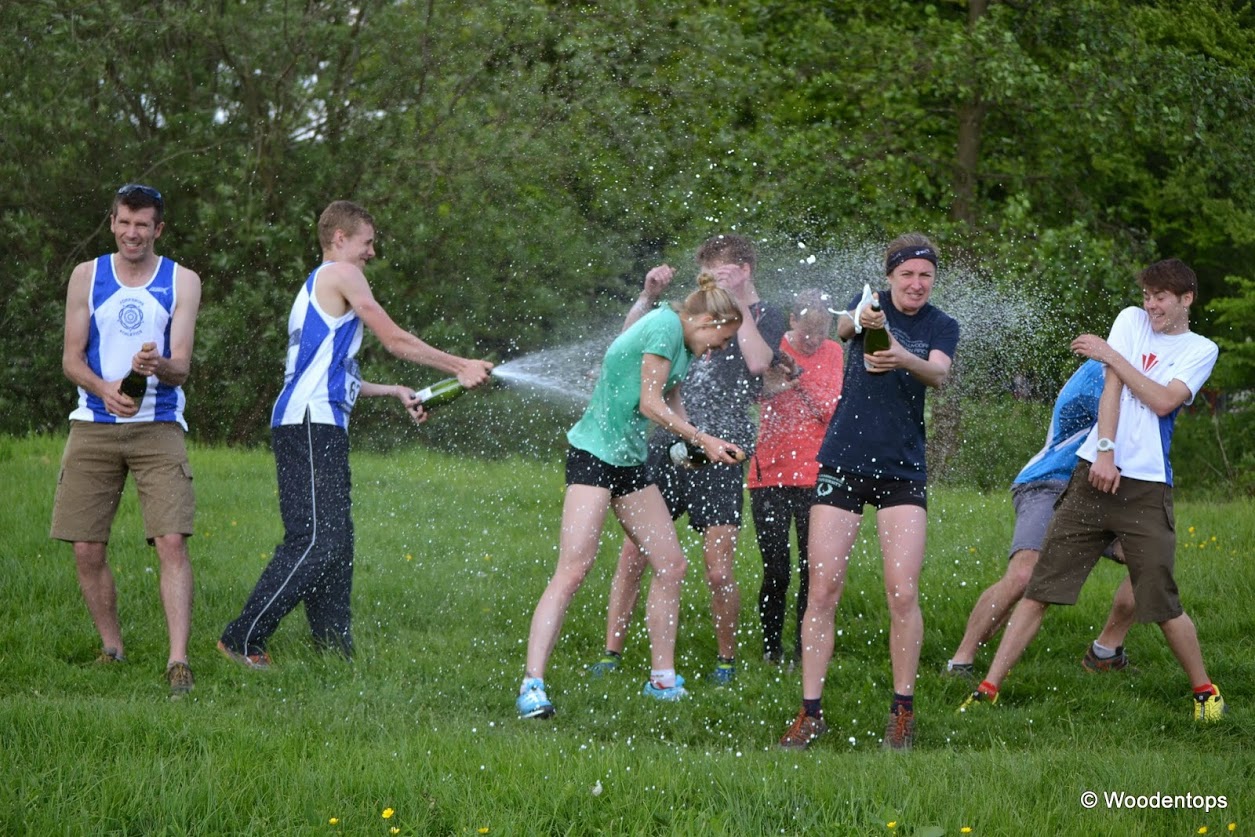 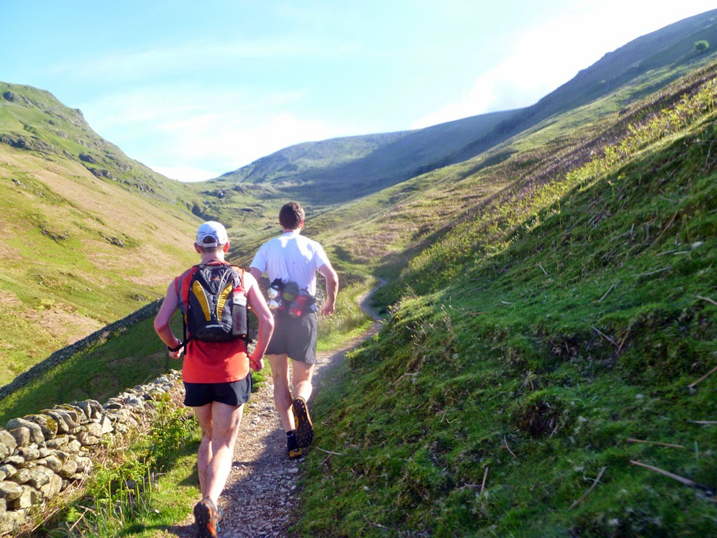 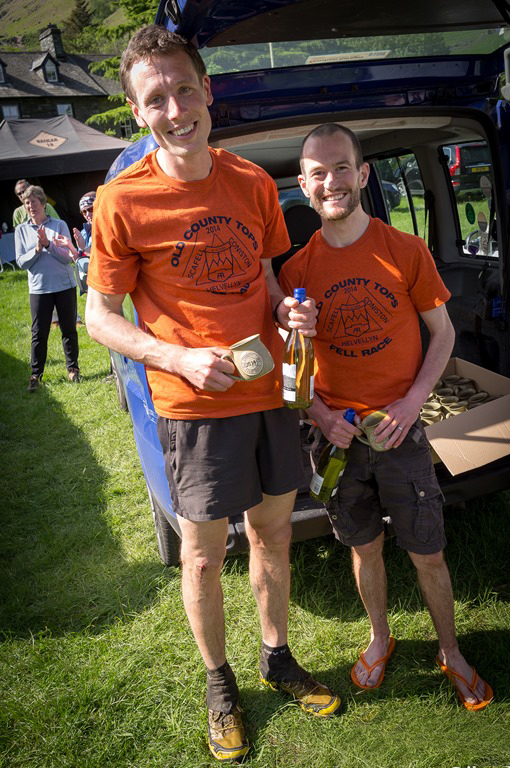 Calder Valley’s runners headed for a weekend of fell race action across Wales, Lancashire, Yorkshire, and the Lake District. Top of the bill was Sunday’s Inter Counties Fell Championships as Holly Page, Max Wharton, Jack Denton, and Issy Wharton ran for Yorkshire pride in a series of races around Witton Park in Lancashire. Heptonstall’s Holly Page was in sizziling form as she helped a star-studded Yorkshire ladies team to the gold medal, and in doing so earned her selection for the England team ahead of the upcoming Karrimor international trail race and Home Countries international. Meanwhile it was gold all the way as Max Wharton won the Under 18 race while Jack Denton took Under 16 honours. Issy Wharton was proud to have earned one of only three places on the girls Yorkshire team. Max could also feel proud of his performance at the Yorkshire Track and Field Championships on the previous day. The Heptonstall ace speedster beat rivals from across the county to become the Yorkshire 800m champion.

In the Lake District the 9 miles and 3000 feet of Fairfield Horseshoe was first up, with Calder’s John Minta and Linda Hayles joining 278 runners over this spectacular ridge route to finish in 1:54:01, 119th and 2:22:48 , 247th respectively. Adam Osbourne of Leeds City was first man in 1: 22 with Judith Jepson of Dark Peak Fell Runners winning the ladies race 1:40:23.

In one of the toughest Lakeland events The Old County Tops starts in Great Langdale before taking in the tops of Helvellyn, Scafell Pike and Coniston in its 37 miles. After hitting the highest point in England Scafell Pike the runners can either retrace a route back down a rocky trail or risk it all to gain vital minutes on a treacherous route, straight off the side of the mountain. Calders Ian Symington and friend Ed Bailey came 3rd pair and only minutes behind first place Stephen Pyke and Jon Morgan of Dark Peak. Valley’s Kevin Hoult, Linda Murgatroyd, Chris Mawdsley, Manhar Patel and Jackie Scarf also completed the route, with Hoult recording another fine performance in 7th place.

A gaggle of Calder sun seekers headed for North Wales coasts and mountains to pitch up at the king sized Cader Idris fell race, one of the toughest races in the Welsh FRA calendar. The rocky route features 10.5 miles straight up and straight back down the mountain with just shy of 3,000ft of climb. This marvellous event was held in glorious sunshine and won by Felipe Evans from Aberystwyth in 1:25:52 with recent Wadsworth Trog winner, Macclesfield Harrier’s Simon Harding close on his heels in 1:27:00. Calder Valley well represented by: Ben Frechette in 38th in 1:48:31, Jim Mosley in 67th taking 11 mins off his time last year in 1:55:38, and Richard Ingram in 100th in 2:05:33, and Nathan Kennaugh in 147th 2:15:18. 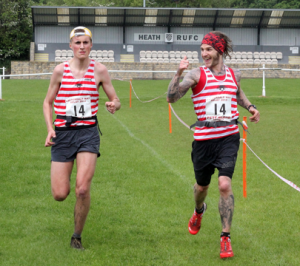 The 30th running of Halifax Harrier’s excellent Calderdale Way Relay took place on Sunday and perfectly inclement May weather greeted the ninety teams that had travelled far and wide to compete.

The race covers the whole of the 50 miles of the Calderdale Way in six separate legs, starting from Heath RUFC at Greetland and taking in all the world famous delights the Calder valley has to offer. As such, it was fitting that local fell club Calder Valley fell runners supplied six teams of runners (72 club runners in all!!!), with the men’s A team sweeping all before them with a brilliant overall win in 5:57:12, a whopping  eighteen minutes or so  ahead of their closest rivals from Wharfedale.

The tone for Calder Valley was set by last year’s captain Ben Mounsey and partner Gav Mulholland. After a slight delay while the field waited for Gav to extricate himself from a nearby bush, Ben blasted out of the blocks like a scolded cat and tore off toward Norland Moor with Gav in close attendance. From there Calder A were never other than miles ahead, and with juniors Brad Traviss and Max Wharton, Calder’s young Coe & Ovett, dismantling leg 3 in an outrageous time of 34:12, it was left to the steady hand of Karl Gray and Tim Ellis to tame the exposed leg 4 which they did with their customary panache.  John Lloyd/Andy Thorpe and Joe Crossfield/ Jonny Helliwell ensured no drama ensued and cruised back to Heath RUFC for a comfy win in one of the fastest times of recent years.

Calder B team, a collection of runners that wouldn’t disgrace most A teams, were similarly on fire as they came in 7th overall. Returning maverick Adam Breaks compared notes with Scottish international Ian Symington who got things off to a fine start on leg one, but one of the runs of the day came from Mytholmroyd duo Ben Frechette and Mark O’Connor who ran a herculean leg 4 to stave off the threat of Todmorden A aces John Wright and Andrew Wrench.  This they did, just, and both collapsed over the line like shipwrecked mariners finding shore, with the Tod duo hard on their heel a few seconds behind.

Calder Valley Ladies were also in dominant form and came in a superb 43rd overall and 3rd ladies team. Captain Helen Buchan clearly had her Weetabix as her and young star Issy Wharton were a whisker off the course record for leg 3, returning a brilliant 46:57; Helen was enjoying herself so much that she had a quick brew and helped out and did leg 6 too, keeping Naomi Sharratt company for a sparkling 1:32:59. Captain fantastic indeed.

Well done to all who took part and a big thank you to Halifax Harriers and all the marshalls for such a splendid event.

The English Fell Running Championships continued on Saturday at the Coniston Fell Race, which is the first medium counting race in this year’s Lake District centric championship.

With Kentmere Horseshoe being the other medium scoring race and Ennerdale and Sedbergh Hills, in the nearby Howgills, being this year’s long counters, Borrowdale Fell Runners hold a distinct advantage over other fell running clubs for this campaign and their band of merry purple vested men were out in force to dominate proceedings in this most classic of lakeland races. Morgan Donelly, Ben Bardsley and Jim and Phil Davies all over forty and all demonstrating their longevity at endurance running packed into the top twelve places overall. With their younger club mate Martin Mikkelson-Barron coming home in eighth, Borrowdale easily won the first men’s team.

In the individual race Tom Addison of Helm Hill continued his brilliant start in his quest for the coveted title, the young international mountain runner just outkicking Rob Hope of Pudsey and Bramley to finish a second quicker than his highly decorated and more experienced rival. Borrowdale’s Morgan Donnelly was third, ahead of seven times winner and course record holder Ian Holmes, who excels at the rough technical descent from the top of Coniston Old Man to the finish.

Calder’s red and white vests put on a solid show with Karl Gray, Gavin Mullholland, Alex Whittem and Ben Mounsey all inside the top twenty five places. Tim Ellis, who has been going well in lakeland races recently, had a slightly below par run to finish in 45th.

Run of the day at Coniston was definitely from Victoria Wilkinson from Bingley. Victoria smashed the course record by over three minutes to finish in 1:17:11. What is most remarkable about her performance is that she won the three peaks fell race in one of the fastest women’s times ever only week ago. From a Calder Valley perspective, the irrepressible Sally Newman continues to make a strong claim for the Women’s V50 title with a fine run.

Much closer to home, Katie Walshaw of Holmfirth Harriers, notched up an equally impressive performance at the local ‘Coiners Fell Race’ on Bank Holiday Monday. The race, which starts in Mytholmroyd, takes competitors through the bogs of Erringden and Bell House Moor and around Stoodley Pike. The race is named after the infamous counterfeiters from Cragg Vale in the 18th Century who produced counterfeit currency by clipping the edges of coins and melting them down with base ores to produce new coins. And there was nothing fake about the performance of the Holmfirth based athlete, who didn’t just clip Jo Buckley’s previous ladies record, but took six minutes off it to win the race outright and get pretty close to the men’s record. It’s highly unusual for a woman to win a race outright and there were audible gasps of amazement as Katie flew into the finish field a full forty seconds ahead of second placed Christian Homes of Wharfedale, with Abbey Runner’s Phil Livermore in third.
Tim Black returned to racing with a fine sixth place ahead of Joseph Crossfield in ninth and with Ashley Sharp a little further back, Calder Valley’s men had a successful outing to win first team on home soil. 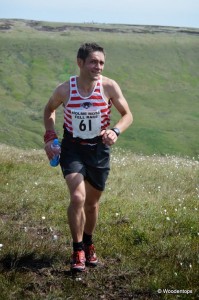 The 60th running of the iconic Three Peaks Mountain fell race took place on Saturday out of Horton in Ribblesdale. A huge field of over seven hundred runners converged upon the picturesque village for what is widely considered to be the blue ribbon event of the fell running calendar.

The gruelling 24 miles/5276ft course picks off Pen-y-Ghent, Whernside and then Ingleborough in sequence before an arduous, interminable six mile descent back over unforgiving limestone pavement back into Horton. Fantastic crowds were on hand to cheer off the runners as early rain gave way to clear skies, and a star studded field swept up the stony path toward Pen-y-Ghent.

The race unfolded into a dual between previous winner Tom Owens and the marvellously named Ricky Lightfoot with the Salomon sponsored international runner Lightfoot claiming the eventual victory in an eye-watering time of 2hrs:53:16. Bingley’s Victoria Wilkinson claimed victory in the women’s race with sparkling run of 3:21:32 giving her 17th place overall.

Calder Valley are always well represented at this race with the men claiming a superb 2nd place overall in the team event. Karl Gray, although perhaps not firing on all cylinders this year, once again scooped the coveted men’s’ V40 prize for his 9th place, with Alex Whittem again having a storming run round the course to claim a brilliant 12th place. Kevin Hoult (36th) and Graeme Brown (53rd) were the other counters.

As well as the delightful scenery and majestic railway viaduct, the race can also take you too some dark, abyssal places psychologically, none more so than the near vertical crawl up Whernside, which for most runners is just about the last thing they need after 12 miles of unrelenting running. No amount of Lucozade, sports gels or Jelly Babies can stave off the fatigue-laden delirium your average club runner experiences near the summit. No better illustration was the great scrap between Calder’s Steve Grimley, Jim Mosley and Bert Ingram. The trio swapped places umpteen times throughout the race, but arrived at the Whernside summit in befuddled unison, with Grimley eventually taking the spoils with a splendid climb up Ingleborough, which created an unassailable lead for his rapid descent back home to Horton.

There were heroics in the ladies race where Calder skipper Helen Buchan took an acrobatic tumble coming down of Ingleborough, launching herself into the air and injuring her knee and collar bone on landing. In a sporting reversal of last year’s fortunes, her running mate Kate Mansell who had similar strife last year, assisted her all the way back to the finish, with the dynamic duo crossing the line in just over five hours.

Fancy a go yourself? Calder Valley encourage you to come and join their ‘Back to the Fells’ series of fun runs which start again on Tuesday from Mytholmroyd Community Centre. Visit www.cvfr.co.uk for more information