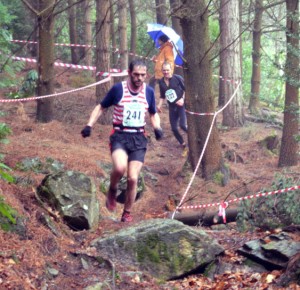 Calder’s womens captain Helen Buchan, following her map and compass, had the best run of her fell career getting a top 20 place and less than 5 minutes behind Helen Fines who was 8th woman overall in 1 hour 31 minutes.

A tricky start to the season awaited Mens Captain Shaun Godsman who followed a group of elite runners rather than his instinct to get out his compass. He rued that decision as he traversed all over the misty Mourne Mountains trying to find the right checkpoints. He did complete the race but was behind his female counterpart Buchan by over 2 minutes. Guess who had the biggest smile on her face post race but like a true stalwart Godsman took the beating on the chin.

Posting the fastest downhill time of the race was descender extraordinaire Karl Gray finishing in 15th place in 1 hour 11 minutes. He secured 3rd Vet 40s placing to kick start his medal chances. Just 1 place behind and with the 3rd fastest downhill time was Tim Ellis completing the race 4 seconds adrift of Gray. It was a day of mixed successes with almost all of the field going wrong in the mist at some point. This is all part of the fun of fell running as its not always how fast you can run but whether you can find your way. A great night followed as the runners compared notes on the race and danced away their disappointment.