Perhaps the best feature of the race is its ability to change each year to the vagaries of weather, time and controlled moorland fires. This year 106 runners decided to experience this season’s moorland features setting out from the farmer’s field adjacent to Booth cricket ground on Sunday, with 105 returning having found all the check points (…more on this to follow). A surprisingly tough and fast ascent through pasture took the increasingly strung out procession of coloured vests onto Midgley Moor and up onto Crow Hill. From there runners take either established paths to Sheepstones, or they risk entanglement and inertia in heather to reach a common point of convergence at the trig point. This proved to be the temporary undoing of Calder Valley’s flying postman Alex Whittem. Alex has been in great form, but he was temporarily enveloped in confusion, unable to stamp his commanding lead on the rest of the field as accomplished navigator Ian Nixon of Pudsey and Bramley took the lead.

From there the race drops into the Luddenden Dene Valley near Castle Carr before a sharp climb takes runners back to the wall corner behind Crow Hill on Midgley Moor. This is where the key route choice presents itself as runners have to find a good line across the moor. Alex Whittem made amends for his bad route choice by finding a great line to the final checkpoint as he wrestled the lead from Nixon to post his first victory in this race after a number of close run races in the past.

Nixon was second, with gentle giant Joe Crossfield coming a creditable third, although Calder’s young star was disappointed with his run.

Helen Fines continued to show early form with yet another victory for the women. The Veteran Vet was joint English and British champion last year and she’s in imperious form again as the championship season kicks off next week. Helen’s teammate Jo Buckley was second lady after a sprint took her two seconds clear of chasing Lynn Clough of Wigan.

Special mention goes to Alexander Bowden who used to go to Calder High, where Calder legend Gary Webb got him into fell running as a teenager. He’s had some pedigree as a road runner since then, but he fancied doing some fell races, so re-joined CVFR, despite living in Milton Keynes! On Sunday he made the round trip from home just to run the race, but he didn’t stick around long enough to collect his team prize bar of chocolate. This delighted unattached runner Danny Franklin who received the prize as consolation for getting lost on a flagged section.

Calder Valley Fell Runners and Race Organiser Hannah Dobson would like to extend thanks to all the landowners, especially Geoff Midgley from Dean House Farm. Landowners also requested that as it’s now lambing and bird nesting season, they would be grateful if moorland runners can keep dogs on leads and stay on the footpaths.

The £400 raised from the race went to Cancer Research UK. 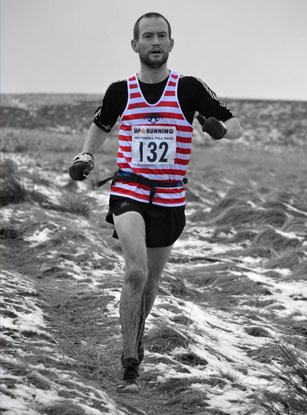 A measure of Ian’s run is that his brilliant time of 4:10:35 would have been good for a comfortable win in four of the last five year’s races; scant consolation for Ian no doubt, but he’s sure to be back next year for a tilt at the coveted crown. But as ever in these parts, be wary of men wearing purple vests and it was Borrowdale star Kim Collison who took victory in a marvellous 4:04:31, with Helm Hill’s Adam Perry taking second in 4:06:23. Claire Shelley took the ladies’ title with 81st overall, with Calder’s endurance ace Linda Murgatroyd carding an excellent 5:56:12 to come in 136th. 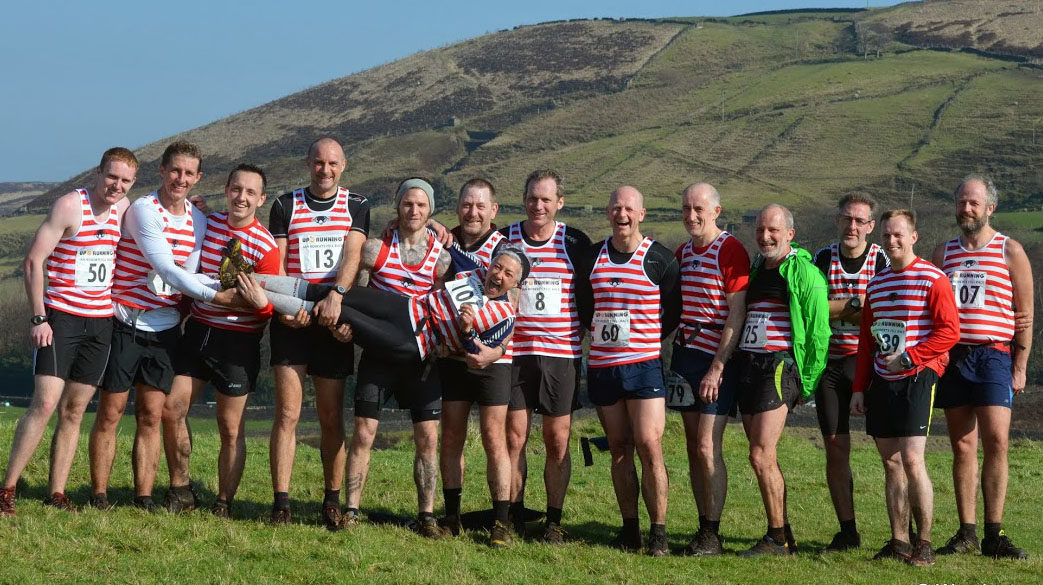 Sunday saw the second round of Calder Valley’s club championship with the medium category Ian Roberts Memorial race from Marsden Cricket Club. As such, a bumper contingent of red and white descended upon the picturesque cricket ground, which was bathed in Sunday’s glorious sunshine. The 6.4m/843ft route is not one to be underestimated as it combines a tricky combination of track, climb, mud, rapid descent and Grimley-esque knee high tussocks. The race is in memory of Holmfirth Harrier’s former star fell runner who tragically died after being struck by lightning while climbing in the Italian Alps some years ago.

Calder’s young star, Joe Crossfield, made the early running and was closely tracked by fellow colt, the whippet-like Jack Ross from Staffordshire Moorlands AC. They scrapped it out over the initial climb up to Swellands Reservoir with Joe ultimately settling into a decent lead and looking good for yet another win. Tucked in behind were Penistone’s Andy Swift, Colin Walker from Pudsey & Bramley, Calder’s pin-up Jonny Helliwell and a clutch of local Holmfirth Harriers.

But as the leading group turned to face the daunting rake up Pule Hill, a local marshall, in a rare case of an official not sticking his beak into things, gladly let Joe run thirty-odd yards or so off course, thus letting the others pass him, in turn demoting Joe down to third place. Somewhat miffed by this blatant act of local skulduggery, Joe corrected his error, stamped on the gas and hit the afterburners in a blazing ascent of Pule Hill. He had just caught the shoulder of the leader Jack Ross at the summit when disaster struck and his calf muscle went twang.

A disconsolate Joe was left to trudge back to the start, rueing his bad luck at the shoddy piece of marshalling. Jack Ross took full advantage of Joe’s misfortune to gladly take the win in an excellent time of 48:33, with Andy Swift of Penistone in second in 48:45. The Calder cause was picked up by Stainland’s version of the Sistene Chapel, super-Jonny Helliwell, who put in yet another top class run to come in third.

The ladies race was keenly fought with Helen Berry of Holmfirth Harriers taking the spoils in 56:39 and 22nd overall. In second was Calder’s super-vet Sally Newman continuing her splendid start to the year with a brilliant run to come in 36th. Sally made light work of the knee deep, trap-door tussocks on the rapid descent toward Butterly Clough and again showed why she’s one of the most consistent performers in town. Gillian Wisbey can also be pleased with an excellent 112th place as her dedicated early season training schedule continues to bear fruit.

Elsewhere, Liam Gough, Richard Sunderland, the returning Steve Smithies, Graham Hill, Jim Mosley and Spartacus himself, Garry Traviss, contested an excellent top order battle – Garry recovering from losing a shoe at one point – to see a host of Calder in the top quartile of finishers. Former Red Star legend, Richard Ingram, brushed aside the aches and pains from Pendle the day before to card and excellent run, and ever-presents Andy Thorpe and Dave Culpan once more kept the red and white flag flying in the midfield. Graham Davy, who has just about dried out from his Trog marshalling duties, came in in a splendid 122nd.

The day before at Pendle near Burnley, the Stan Bradshaw Pendle Round (10m/1934ft), Richard Ingram was highest placed Calder finisher. This came after the double retirement of Royd Rocket Mark O’Connor and the swarthy pocket dynamo, Ben Frechette, who both came a cropper in the eerie mists atop Pendle Hill. Both now face a race against time to be fit for Saturday’s Howarth Hobble – no small undertaking at 32 miles. The race was won by Pudsey & Bramley’s Rob Hope, one of the country’s best at this distance, with Bingley’s Victoria Wilkinson wining the ladies’ race.

Calder Valley’s talented Wharton family made a bold showing in Sunday’s Ilkley Moor Fell Race with both Max and Issy claiming the under 23 prizes. Max finished 4th, only 55 seconds behind team mate Alex Whittem who clocked 39 minutes 51 seconds to take 3rd place overall behind the useful pair Tom Adams from the host club (36:41) and Simon Bailey, current English Champion, from Mercia Fell Runners (37:27). Max’s sister Issy had a storming run to finish 111th in 55:01 and to keep it in the family dad Mark also had a great run to place 29th overall in 46:59. Two other Valley runners took part in the senior race – Lee Shimwell in 40th (47 :05) and Philip Jones in 195th (67.18). The 8km race is over a very difficult course with brutal climbs and long, fast descents. It is regarded as one the best short race routes in the region, starting on a good track adjacent to houses in Wells Road and rising steadily to pass the tarn. Backstone Beck, the famous rock of the Cow and Calf, the Pancake Stone, Barmishaw Hole, Badger Stone, Weary Hill and Spicey Gill are other features before a final giddy plunge down to the finish.