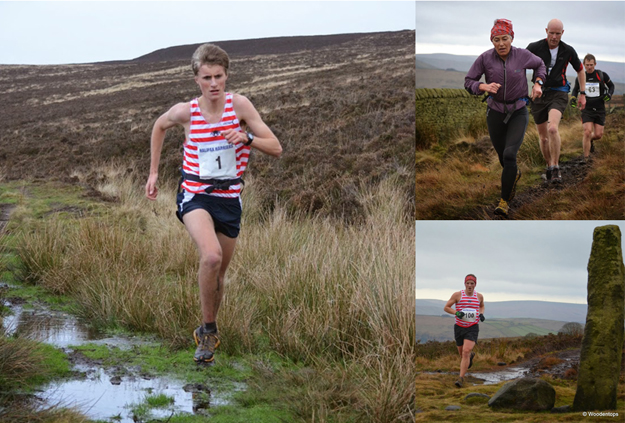 A field of 108 runners completed the six mile course over very muddy and wet terrain.

Crossfield clocked 48 minutes 46 seconds and finished 53 seconds clear of Pudsey and Bramley’s Ian Nixon with Wharfedale’s Christian Holmes seven seconds further back. Sally Newman made it a double for Calder Valley. She won the women’s race in a time of 58:34 and finished 25th overall. She was chased home, at a respectable distance, by Jan Smith from Ilkley (62:58) with another Calder Valley runner, Jackie Scarfe, in third.

Valley packed seven men in the top 22, with Mark O’Connor, Robert Paradise, Lee Shimwell, Jonathan Emberton, Simon Giles and Bill Johnson following Crossfield over the finish line. However, that still wasn’t enough to stop Wharfedale taking the men’s team prize . Calder Valley were not to be denied in the women’s equivalent, however.

Tim fighting hard for 3rd place (courtesy of www.woodentops.org.uk) – Helen, Sally, Joe and Max as with their well earned medals at FRA Do.

For most people, the end of November is a time for Christmas planning, perhaps writing your card list or maybe traipsing round the Trafford Centre. For fell runners though, November means only one thing – the legendary Tour of Pendle.

A few hours of self-flagellation up and down the famous hill might not be everybody’s cup of tea, but five hundred enthusiasts took the plunge from Barley Village Hall and embarked on the daunting 17 mile, 4500ft course.

The race was run in perfect November conditions, a touch parky but crisp and sunny, with the event yet again demonstrating why fell running is sport in its purest form. Where else can an amateur Joe pit his or her skill against the country’s best, all for the trifling sum of £7? Calder Valley sent a bus load of twenty eight runners to do battle on the Lancashire moor and it was again recent signing, Tim Ellis who rolled up his sleeves and showed he meant business.

Locking horns with Bingley’s maestro Ian Holmes and Snowden’s Matt Roberts, two of the country’s most lauded, he fought tooth and nail all the way round the brutal, some would say sadistic route, as the three formed the elite trident out in front. But with a mile to go, and with Tim smoking the afterburners on the final descent down to Ogden Clough reservoir, disaster struck as he took a huge tumble as he approached the steep drop down to checkpoint eleven. With badly gashed knees and shins, Tim somehow gathered himself and bravely kicked for home to secure a valiant third place, behind Matt and Ian respectively, Matt winning in 2hrs:17:22

Close behind for Calder, Half Trog victor, James Logue came in 6th, young flyer Joe Crossfield came in 10th and the Lion of Llanberis, Graeme Brown confirmed his rising status as a top runner with a brilliant 13th place. As such, Calder easily took the team prize, completing an audacious coup on the hallowed Lancastrian turf.

The race was followed by the FRA Do hosted by Clayton-Le -Moors at Langho. A small contingent of the club had a great night with a smashing meal followed by the medal presentation. Helen Fines needed a large holdall to take away here well earned medals after one of her best seasons. It was then down to the more serious business of a few celebration drinks and some fast foot work on the dance floor.