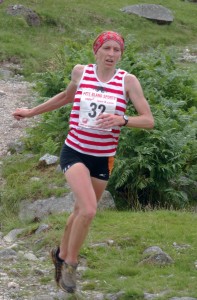 This weekend’s Blisco Dash race proved to underline Helen Fines’ favourite status for the 2013 women’s British Fell Running title, with the Calder Valley runner striding out a clear winner in Cumbria at round 3 of this year’s series…

As an English and British Championship “counter” Blisco has always been a classic ‘short’ Lake District race, starting from Langdale with a lung bursting first half mile up the road from the Dungeon Ghyll followed by a steep grassy track leading Blisco mountain plateau and three rock steps to the summit to make a total of 2000 feet of ascent. The race finishes with a headlong descent to the valley floor, calling for bravery, agility, and technical prowess.

Fines over came the challenging route and searing heat to beat the course record showing why this year could well be her year in terms of the British title after finishing runner-up in 2012. With Todmorden’s Lauren Jeska a non-starter through injury it was to be Bingley’s Vic Wilkinson and Jasmin Paris (Carnethy) who would pose the main threat to Fines on the day.

The win makes it two first places and a second for Fines, meaning that only Wilkinson can still possibly challenge for the title after her win at Yetholm and second place at Blisco – and a win at the Peris Horseshoe final round in September would put Wilkinson equal on points with Fines. However, a win for the Calder Valley runner would put things beyond all doubt and give her a maximum 96 points, so it’s all hypothetical at the moment! The win also put Fines firmly in charge in the English fell champs for 2013.

Meanwhile, in the men’s championship, Calder Valley’s 17 year old Max Wharton prospect for the future stepped up to the senior competition. Despite the stifling conditions Max demonstrated his potential, completely un-phased by the top class competition around him, he placed an impressive 6th overall (39.10) ahead of the likes of in form club mates Shaun Godsman (12th), and Tim Ellis (25th).

Starting from Calderbrook Church near Littleborough, the route followed feint sheep trods and pathless moorland, up and down 6 steep climbs, to make a rough roller-coaster ride that combined with hot and humid conditions to test competitor’s endurance and stamina.

It could have been double victory for Calder Valley as Andy Fleet looked set to win the men’s race as he lead the field across the Lancashire moors, but perhaps blinded by the dazzling July sunshine he completely missed the flags marking out the route, and along with a with another runner, ended up following their own route onto the wrong hill. This allowed Harry Dalby of Pudsey and Bramley to steal victory in 1hr.18min, with Holly Page only 34 seconds behind in 3rd , with Colin Faulds of Lostock in 2nd .

15 Calderunners completed the race in field of 80.