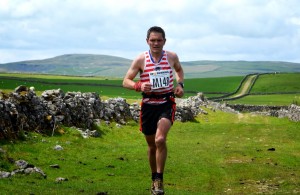 Karl on his way to earning his England Vest, photo courtesy of the Woodheads

Making the most of a fantastic early summer heat-wave, Calder Valley’s runners opted to soak in as much sunshine as possible by upping their mileage at last weekend’s long distance endurance races in Wharfedale, and closer to home on the Wadsworth moors above Hebden Bridge.

The 25 mile Wharfedale Off-Road Marathon features some of the Dales finest scenery, climbing a total of 2,530 feet from Grassington, over to Kettlewell, Haweswick, and Arncliffe, before climbing up to Malham Tarn, Mastilles Lane, and Boss Moor. Once again the UK’s top fell runners were out in force as the 2013 race was chosen as a selection race for England vests ahead of the World Long Distance mountain Running Championships in Poland.

Calder Valley’s Karl Gray ran the marathon distance in an incredible 2hr.42min (many of the fastest club runners would struggle to complete a flat road marathon in less than 3 hours). Alas this herculean performance was not enough to seize victory in the face of formidable competition. In what can only be described as a super-human effort, Ellenborough’s Ricky Lightfoot was first across the finish-line in a staggering 2hr.33min, over 4 minutes ahead 2nd placed Carl Bell of Keswick AC (2hr.27min). The Calder runner has been informed that his superb run has earned him an England call up.

There will be no such uncertainty for Calder Valley’s Jo Buckley, as she went one better by guaranteeing her England place, once again proving her international credentials by out-pacing a strong field to win the women’s marathon. Buckley smashed the course record, running a sensational 3hr.04. The record breaking time may have been forced by the close finish; Shona Robertson was hot on Buckley’s heals to the last, with only 45 seconds separating the top 2 women as they crossed Grassington finish line. Jo can now look forward to a memorable England appearance in the Polish Mountains of Szklarska Poreba along with team mate Helen Fines, a proud achievement for all 3 and Calder Valley Fell Runners.

Whilst Jo and Karl competed for international glory, glorious sunshine bathed the less competitive Calder Valley contingent who chose to stay on home ground for the annual 21 mile Wadsworth Boundary Run. Organised by The Rotary Club, the charity fund raiser is aimed at both runners and walkers. The challenging route includes the beautiful wooded valleys of Hebden Dale, Crimsworth Dean, and Graining Water, interspersed with the commanding heights of the moors above the Luddenden Valley, Midgley, and Walshaw. Despite the more relaxed format, Calder Valley’s Alex Whittem clearly had his sights set on getting round in the fastest time possible. Winning the men’s race, Whittem amazed the organisers as he powered round Wadsworth’s 21 mile boundary, ignoring the baking heat, to complete the route, in a sizzling 2hr41 mins. Gillian Wibsey made it a Calder Valley double as she arrived back in Hebden Bridge to celebrate being the first lady home. The event may now grow in popularity amongst local fell running enthusiasts, many of whom were impressed by the scenic route, excellent organisation, free refreshments, and warm atmosphere. Other Calder Runner’s taking part included; John Underwood, Heidi Rushton, Peter Fitzpatrick, Stephen Grimley, Mike Wardle, Jane Frechette, Paul Frechette.

Further afield new club member Ash Sharp decided to go beyond the limits of normal endurance to put him-self through the indescribable pain that constitutes the Edinburgh to Ben Nevis, City to Summit Triathlon. The Heptonstall based runner trained hard for 6 months to prepare for the 2.4 mile open-water sea swim in the Firth of Forth, a 112 mile road bike ride around the Highlands, including 8200 feet of ascent, followed by the small matter of a 26.2 mile marathon, with 9000 feet of ascent, taking in the summit of Ben Nevis. Ash finished a highly creditable 55th out of 200 starters in 15hrs13min. The winner completed the event in just under 12 hours. Calder Valley will now be expecting great things of their latest signing as he returns to the comparative normality of fell racing.

Away form the long-distance action a small but perfectly formed contingent of Calder runners, spurred on by the promise of free chip butties, headed over the county boundary to the wastes of Lancashire for the Edenfield Fell Race. The 6.5 mile run is staged by Edenfield Community Association and is renowned for its chip-based refreshments. The route includes 1600 feet of ascent, forcing runners into hands on knees scrambling, quickly followed by some classic long descents, before a final lap around the cricket pitch finish, following the tantalising aroma of fresh chips emanating the pavilion. Calder Valley’s James Logue came in second, only narrowly losing out to Trafford’s Joe Mercer. Others Calder Runners cashing in their chips included: Steve Smithies, James Kershaw, Jim Mosley, Jake Ackroyd, and Nathan Kennaugh.

Finally, back over in God’s Own Country, a trio of Calder runners took part in the short sharp shock of Pen Y Ghent fell race. The 5.5 mile race heads straight up the rocky Yorkshire summit from the village gala at Horton, followed by a further ascent to the top of Whitber, to cover a total of 1600 feet of ascent. Calder Valley’s boxing, fell-machine, Rob Paradise made the mistake of racing whilst recovering from a bout of flu. He still managed to over take many rivals on the white knuckle descent, to finish 34th out of 132 runners, in 57.55. The winner, Mark Addison of Helm Hill, finished in 47.25. CVFRs Trevor Murgatroyd was 86th in 1hr.06min, whilst Toby Sybes came in 105th in 1hr.11min. 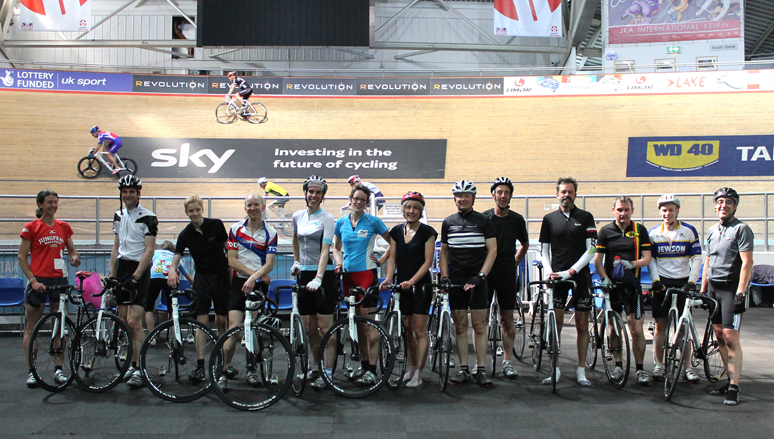 Smiles all round at Manchester Velodrome

…… and we want to do it all over again. Watch this space as there’s sure to be another trip to the velodrome later in the year. Here’s more action shots from the velodrome

Happy “Tasters” enjoying themselves in the sunshine

Last Tuesday saw the first of a 7 week ‘Introduction to Fell Running’ session. An amazing 20 new runners turned up in the glorious sunshine to explore the moors above Mytholmroyd. It was a baptism of fire, with everyone heading straight up the quickest – and steepest – route to the moor. This route, up Wicken Hill to Sheep Stones Trig point, is the most severe climb we have around our Mytholmroyd base, so all those that conquered it should know that everything else will seem easier! It was worth the steep sharp shock though, since it quickly got us to the easier moorland running and the views were fantastic – including dramatic plumes of smoke from the moorland fires at Cragg Vale. Everyone did really well, and while there were a couple of experienced road runners that looked like they could have run a bit further and faster, most found themselves working harder than they were used to, and should be pleased with their efforts. They certainly look happy in this photo, taken shortly after they’d enjoyed their first taste of running downhill.

A few old hands who had fallen out of the habit of running with the club also took the opportunity to come along and get back into the tuesday night pack runs. Thanks to all the CVFR members who came along and chatted to everyone and made it such sociable event. It was great to see people in the Shoulder of Mutton afterwards – including a couple of the first timers who were keen to try out the fell runner’s preferred rehydration programme.

Everyone seemed to have a good time, so let’s hope they all come back next week! 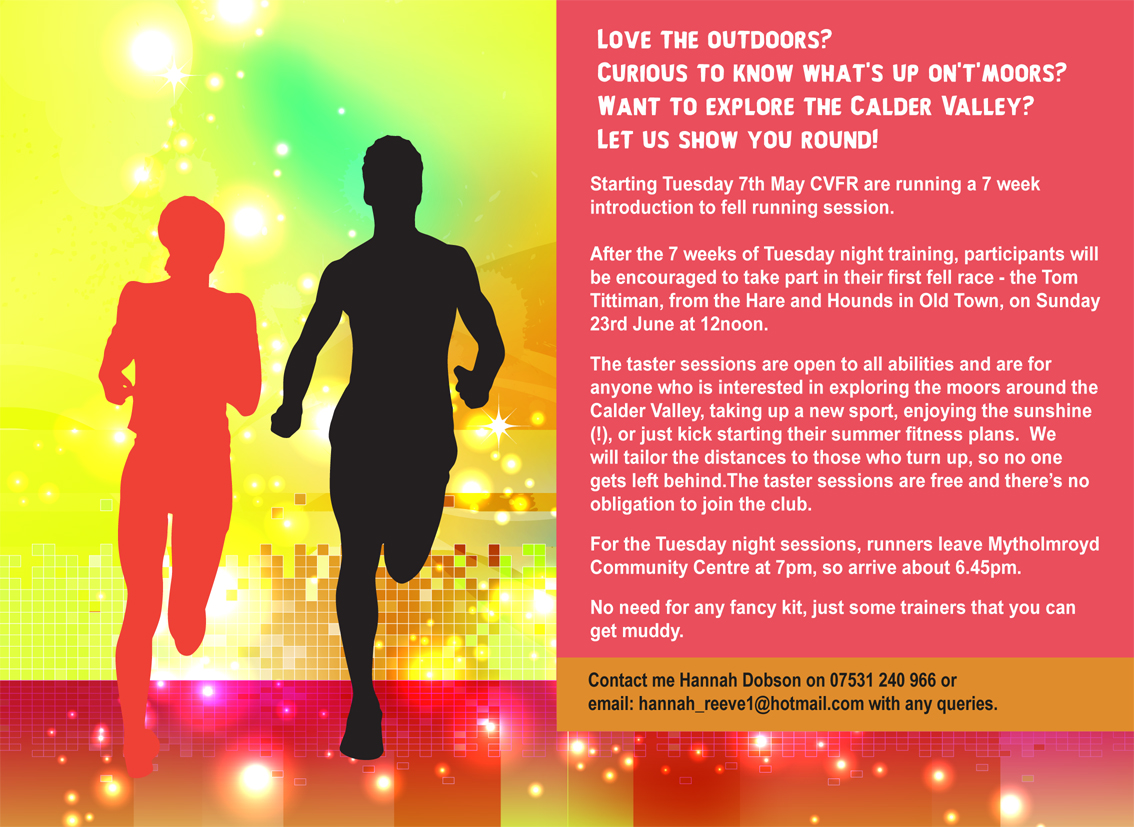