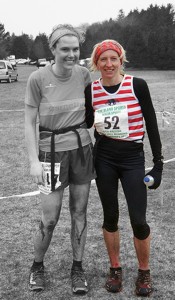 It was another busy weekend for Calder Valley Fell Runners with three events taking place, the flagship one being the ‘Silent Valley’ fell race held over in Northern Ireland. A long way to go you may think for a fell race but with it being a British Championship counter, and Northern Ireland being a popular away day haunt of CVFR, a strong red and white contingent made the trip over.

In conditions bordering on atrocious, biting cold, intermittent rain and poor visibility in thick clag contributed to a genuine Irish stew. Chuck in just shy of 5,000ft to ascend in 9.5miles and you can see why many found the going very tough indeed, with some getting lost a waylaid on the way. Not so Karl Gray and Helen Fines who put in truly superb runs; Karl finishing 4th overall in a field dripping with quality and Helen finishing as first lady in 42nd overall; both scooping up precious British Championship points in the process.

Back in Lancashire, a handful of CVFR competed in Rochdale Harrier’s excellent ‘Wardle Skyline’ race, a 7-mile route around some eye-catching scenery between Littleborough and Rochdale. Robert Paradise, a man to never knowingly miss a fell race, was first Calder man home in a solid 19th place, with Sally Newman first CVFR lady home (3rd overall) in 51st.

Paradise was in action again the day after at Bouldsworth Hill Fell race near Wycoller (8.2 miles/ 1394ft). He went one better coming 18th, but ceded best CVFR finish to Tim Black who finished in an impressive 4th place. First CVFR lady home was Sport Billy herself, Barbara Lonsdale in 40th place overall.

Closer to home, Kevin Hoult confirmed his ascent to the upper echelons of the Ultra Distance running ranks with a barnstorming win in the 37-mile Calderdale Hike race. Building on his recent 3rd place in the 33-mile Howarth Hobble, Kevin spearheaded a brilliant one-two for Calder Valley, finishing ahead of teammate Simon Bourne, to lift the massive trophy. 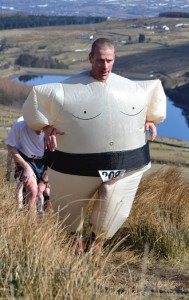 Fat boy Godsman does well at Pendle even after too many pies!!!

The Pendle Fell Race is a short, sharp blast from the pretty Lancashire village of Barley and with the sun shining the village may never have been busier with tourists and fell runners enjoying a beautiful spring day.

The race was awarded Lancashire championship status, swelling the size (340 runners) and quality of the field and amongst the favourites was Rob Hope of Pudsey & Bramley and Ian Holmes of Bingley. Calder Valley elite runners, Tim Ellis and Shaun Godsman, both residing in Lancashire, and thereby eligible for the Lancashire champs, also fancied their chances of a race win.

The race starts on Barley New Road and the first mile is run uphill on a road/lane before veering left onto the open fell and continuing to climb for almost another mile. With the summit on the horizon the route suddenly drops 300 ft to the bottom of the ‘Big End’ leaving an almost vertical 500 ft climb to the Trig point. It’s hands on knees now and even the fittest fell runner will struggle to run this climb. From the Trig point there’s two miles of the best downhill running to the finish.

In a close finish Rob Hope took first place and being a Lancashire counter also the Lancashire champs gold medal. Ian Holmes, looking back to his best after injury, was second just 8 seconds later, with Darren Kay, another Pudsey & Bramley athlete, in third 15 seconds behind Ian.

In the Calder Valley elite battle, experience triumphed over youth with Shaun showing young Tim that he’s not quite top dog at Calder yet! Shaun managed sixth place overall and but was just beaten out of the prizes by Chris Birchall of Leeds. Shaun, the Todmorden fireman, was rewarded with a Lancashire champs vet40 gold medal and a bronze medal in the overall Lancashire champs. Keeping it in the family, Sharon Godsman claimed vet40 bronze in the Lancashire champs.

The ladies race winner was Victoria Wilkinson of Bingley in 14th overall and possibly the performance of the day. Under 18 running sensation, Annabel Mason of Wakefield was second, 17th overall, with Helen Glover of Keighley third.

Team prizes were won by Rossendale men and Burnden ladies. 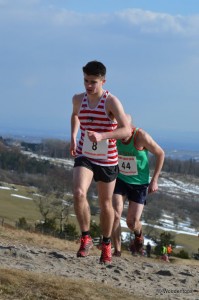 Max in action – courtesy of Dave and Eileen Woodhead

Max Wharton was the star performer for Calder Valley in last Saturday’s Rivington Pike  race in Horwich, winning the under 18s section and finishing 10th overall in a field of 241. Several of Calder’s top runners sat out the event but Valley still finished second among some teams from top clubs with Max’s dad Mark among their counters. Mark was 55th, behind Stephen Smithies (34th) and Robert Paradise (38th) as Valley found only the host club too strong. Rivington Pike provides a short but relentless climb and has been used for an annual fell race since the 1800s. The event had been in doubt due to snow but the weather on the day seemed to finally herald the start of spring. Max Wharton was well placed amongst the senior leaders from the start and comfortably ahead among his age group. His competitive instinct didn’t allow him to ease off on the descent and having got himself into sixth overall, he fell on one of the remaining snowy parts and dropped some places overall. Wharton junior finished 90 seconds behind winner Tom Cornthwaite from Northumberland Fell Runners. Other Valley finishers were Blair Garrett and Jeremy Wilkinson in 215th and 216th while Halifax Harrier under 20s runner Joe  Crossfield was an excellent 12th.