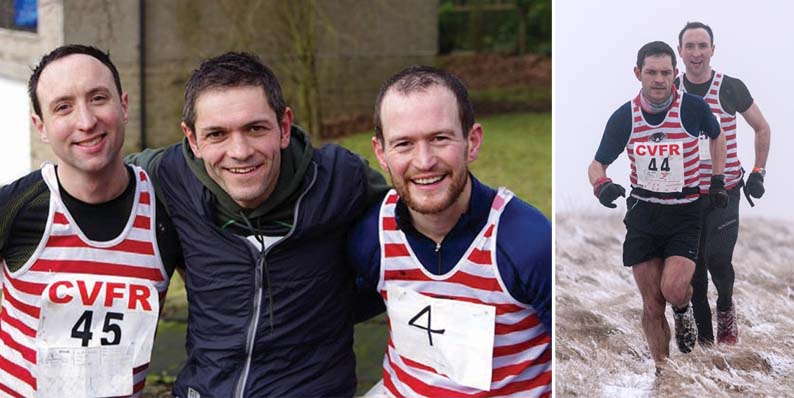 Sub zero temperatures, rain, sleet, and snow, were the backdrop to this weekend’s fell races, as Calder Valley Fell Runners stormed to success in 2 of the South Pennine’s more notorious events. Karl Gray slogged it out on the local moors to take Wadsworth Trog honours, whilst Calder’s Jo Waites secured her second victory in 2 weeks as she crossed the Pennines for Lancashire’s bleak and brutal Winter Hill race.

Starting out from Old Town Cricket Club, Saturday’s Wadsworth Trog is known to many as the beast of the South Pennines, with over 4000 feet of ascent the race covers a fearsome 20 miles of the boggiest winter moorland.

161 hardy runners set off onto the snow covered tussocks with the Calder Valley duo of Ben Mounsey and Karl Gray looking to make it a two horse race. Skipping over the rough terrain around High Brown Knoll and Midgley Moor the local pair built a commanding lead to pass the check point at Cock Hill minutes ahead of the chasing pack.

The Trog then began to exact its crushing toll, as the race ascended the steep, and aptly named, Top of the Stairs, to grind on across the bleak wastes of the Oxenhope Stoop, to the Bronte ruins of Top Withens.

Despite his 43 years, Gray began to edge out his youthful Calder Valley team mate and pulled ahead through Walshaw Dean, before the fatiguing climbs first over Wadsworth Moor, then Shackleton Knoll.

After the brief respite of the descent to Lumb Falls, Mounsey was still clinging on to 2nd place as the route climbed relentlessly back to Cock Hill, for the final excruciating slog across open moorland via Whinny Stones, High Brown Knoll, and Sheep Stones. It was during this tricky navigational section that Mounsey took a series of bad lines with disastrous consequences.

Mounsey’s wandering exploits meant that 1st placed Gray (2.49.11) not only won the race, but finished so far ahead of his pursuers, that he was washed and dressed and waiting with a cup of tea as the second placed runner finally crossed the finish line. Gray’s name now returns to the trophy he won with a still unbroken course record in 2008, he also lead the Calder men’s team to Trog victory along with Ian Symington, and eventual  4th placed Ben Mounsey (3.17.22), to make it another successful day for the red and white stripes.

The race was well attended by Calder Valley runners, including Phil Scarf celebrating his first outing in 50 vetran category.

Sunday morning brought a further deterioration in the weekend weather as the fell running action focused on Lancashire’s Winter Hill.

Calder Valley’s golden girl Jo Waites, dogged by injury for most the last year, proved that she has recovered her shine. The Blackshawhead runner is now firing on all cylinders, taking 1st place at the formidable Winter Hill Fell Race. Starting from Rivington Barn on the West Lancashire moors, the 11 mile route makes various ascents of the infamous hill to include a total of 2700 feet of ascent. Making light work of the boggy ground and atrocious blizzard conditions Waites made it an impressive 2 wins in 2 weeks as she pushed ahead of second placed Lindsey Brindle of home club Horwich RMI, to finish with a 2 minute lead, and a fantastic 24th place overall (2.02.20) in a field of 189.

Calder Valley’s Tim Ellis turned in an outstanding performance in an exceptionally talented men’s field. Ellis took the lead within an elite group of the UK’s top fell runners including Rob Hope (Pudsey & Bramley), Ricky Lightfoot (Ellenborough), Darren Kay (Pudsey & Bramley)and Tom Brunt (Dark Peak). As the group battled it out on the torturous ascents of Winter Hill’s snow blasted slopes Darren Kay soon took pole position from Ellis, with the chasing pack hot on his heels. Biding his time, Ellis began to reel-in Kay, with Rob Hope and Ricky Lightfoot following in his wake, but it was Hope who eventually pushed on to seize the lead from Kay.

The Pudsey and Bramley runner picked up the pace whilst Ellis, Lightfoot, Kay, and Brunt did their best to stay in contention. Rob Hope led the all the way back up Winter Hill to CP6 with the pack clinging on behind. Ricky Lightfoot then made his move, only for Hope to regain the lead on the next ascent, before Ellis dug deep to take his turn out front.

90 minutes into the grueling race there was still nothing between the top runners. All was set for a dramatic finale in the last mile. Hitting the hard surface path, and sensing the end was near, the pace increased on the climb up to Rivington’s Japanese gardens, where Lightfoot “put the hammer down” to open up a slight gap through the final gate, taking first place in 1.40.08, only 3 seconds ahead of Calder’s Tim Ellis in 2nd place (1.40.11); Rob Hope (1.40.15) was 3rd just 5 seconds behind Ellis. Calder Valley’s Steve Smithies also ran superbly to finish in a highly creditable 7th place, Smithies best result in many months and perhaps an indication of a return to form. 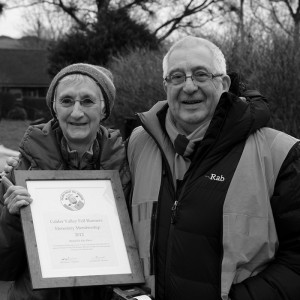 Bernard and Kay Pierce were nominated to receive Honorary Life Membership to say thank you for their many years of commitment and dedication in support of Calder Valley Fell Runners. Unfortunately, due to illness, they were unable to attend the club’s Annual Presentation Evening on 5th Jan 2013, so we had to decide on another occasion to present their certificate. The most appropriate and perhaps obvious event was the Wadsworth Trog.

Formerly members of Clayton le Moors Harriers, they decided to join an up and coming local club and have been members of Calder Valley Fell Runners now for over 25 years.

It wasn’t long before they were planning a long race for Calder Valley. The Trog was their brainchild. It was the perfect alternative to the original Chew Valley Fell Race which had been cancelled due to erosion problems. We had the same Pennine moorland terrain and it was held early in the year when snow and ice were still a distinct possibility making it a real challenge.

Bernard and Kay devised it, planned the route and first presented it to an unsuspecting fell running community on 23rd Feb 1991. It was tough! It had some hard climbs, tricky descents, deep peat bogs and long moorland slogs. It soon earned its nickname ‘The Beast’ and those who have run the race will know why.

They organised the Trog for many years but even now, having handed over the reins to new organisers, they still turn up and are always there to help.

At this years race on 10th February Bernard and Kay were the official race starters and as the runners waited for the countdown, current race organiser Hannah Dobson, who had been asked by a suffering runner after last years race, who would be so cruel as to plan such a tough race, made it known to all that these were the two people who were guilty!

Just before the off we found time to present them with their Honorary Membership certificate and give them a resounding and well deserved round of applause. Look here if you dare