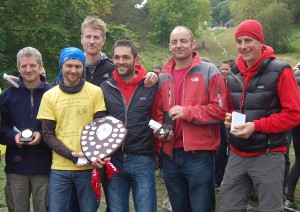 The weather and medal gods were shining over Calder Valley Fell Runners as the mens over 40s team ended a fantastic fell season with gold. The weather was sunny and clear as the British Fell relays started on the hills of Shropshire on Sunday morning. “Moaning” Mark Goldie ended his 1st leg run with a BIG SMILE on his face in just over 41 minutes and in 3rd  spot for the vets team. On leg 2 Karl Gray and Gav Mulholland, both in great form, set off to reel in the 2 vets teams ahead of them in the longest of the relay legs. Job done in a time of 1hour 12minutes and with the pressure on James Logue and Andy Thorpe took up the running in the top vets place. This leg involves navigating to marked checkpoints in a route of your choice. With international orienteer Logue in fine form they soon put more time in between themselves and the chasing team of Sheffield based Dark Peak. They expertly navigated the route in just over 1 hour and 2 minutes. Anchorman Shaun Godsman, who has the young one of the team only turning 40 recently, ran a fantastic last leg in a time of just under 37 minutes. He was welcomed home to rapturous applause and took great pride in finishing a fantastic day for his team of mates. The club had 4 other teams running with the next best result coming from the women. It was a “steep” learning curve on the Shropshire hills on leg 1 for the newest member Helen Buchan, having a solid run on such challenging terrain. On leg 2 international runners Holly Page and Helen Fines posting the fastest womens time for their leg and pulled the team up to 5th place. The navigation of leg 3 was left to ace orienteer Heather Gardner with partner Sally Newman. Jo Buckley, who seemed to be fitting fit after her road relay the day before, stormed round her leg to post the 3rd fastest womens time of the day and passed 2 teams to get the 4th team place. The other teams were made up of some of the older and newer club members alike who really enjoyed the relay experience. Calder Valley Fell Runners welcome new members and meet every Tuesday at 6.45pm at Mytholmroyd Community Centre. “Be Inspired” to try something different.

Lads A and B teams delighted with their success

What should have been a day of celebration for Calder Valley Fell Runners quickly became a day of tragedy for the whole fell running community when the sport lost one of its most endearing characters.

On a perfect day in the Lakes, Calder Valley Fell Runners posted their best ever placing in the Ian Hodgson Mountain Relay, a four leg relay race run over tough lakeland terrain.

First up for CVFR were Brad Traviss and Jason Williams. The two set about challenging for the fastest leg with only Phil Davies and Mike Fanning of Borrowdale fell runners beating them to the changeover, following some judicious route choice from he wily Borrowdale Veterans.  CVFR’s B team of Tim Brooks and Mark Wharton also ran a very strong race to finish in an excellent time.

Next up were Shaun Godsman and Gavin Mulholland who stormed around leg two in the second fastest time of the day behind Borrowdale’s Morgan Donnelly and Ben Bardsley.  Elsewhere in the race, Steve Smithies and Mark Goldie had an excellent leg and kept the B team going in a very strong position.

On Leg Three Calder’s two Tim’s, Ellis and Black, ran a fine leg, only been overtaken by Dark Peak on the technical descent to hand over in third place just ahead of Ambleside AC.  Racing for the B team was Calderdale’s Rob Paradise and Lee Shimwell and the two finished the leg in a great position before handing over to Andy Fleet and Rob Dobson for the glory leg.

Anchoring for the A team were Ben Mounsey and Karl Gray, who reeled in a two minute Dark Peak lead, followed by a descending masterclass on the final descent leaving Dark Peak minutes behind. Gray and Mounsey ran the fastest leg, even beating the time posted by the combination of Bingley legends Ian Holmes and Rob Jebb. This is the finest team performance in a major relay and establishes CVFR as a force to be reckoned with.

The celebrations however were shortlived and soon took a backseat when the truly shocking and tragic news of Darren Holloway (Pennine Runners) began to filter through to the finish. Darren had collapsed on Leg Four at the top of the climb near Fairfield and had to be airlifted to Barrow general hospital. Andy Fleet and Rob Dobson were just behind him and witnessed the event and they were both devastated and shocked by events. It wasn’t until later in the day that the news of Darren’s tragic death was confirmed.

Darren was a very talented fell runner, who always exhibited a real love for and commitment to his sport.  He was known and loved by many Calder runners and throughout the entire fell running community. Calder Valley would like to extend their condolences to his friends and family and our thoughts are with them. 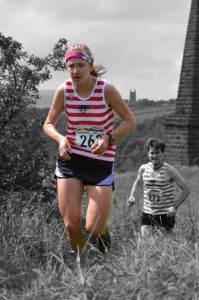 Last weekend saw the outcome of Northumberland’s first national championship fell race, the Kielder Blast,  which has further cemented Calder Valley Fell Runners place amongst the elite of English fell running. The 6 mile race over challenging terrain, which concluded the 2012 English Fell Running Championships, saw Heptonstall resident Holly Page take the victory in the women’s race. This topped off an excellent season for Page, being crowned under 23 champion and silver medallist behind Todmorden Harrier’s Lauren Jeska in the women’s open category. Calder Valley’s Sally Newman has been equally dominant in the vet 50s category, winning gold. Newman also took silver in the vet 45s.
Led by the British championship silver medallist Helen Fines, Calder’s women’s team were delighted to end their season by taking the team silver. Not to be outdone, the men’s team have also enjoyed a medal haul, winning team bronze in the English open category, and  silver in the vet 40s. Karl “Earl” Gray has again proved his class, taking silver in the individual men’s vet 40s category.

On the same day as Calder’s elite runners battled it out just insider the border with Scotland, just over the other border into Lancashire, the club showed that it has the strength in depth to win on two fronts. Jon Underwood, Lee Shimwell, Steve Smithies and Rob Dobson helped Calder claim the men’s team prize at the Thieveley Pike race in the stunning Cilviger gorge in Burnley. Jackie Scarf was first women’s vet 50 and second woman overall.