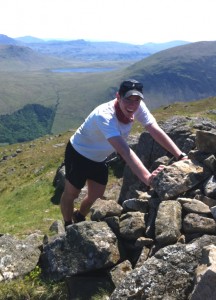 Last weekend (25th/26th May) Lee Shimwell completed the Bob Graham Round in a very impressive 21:51, despite high winds early on and then frazzling temperatures from leg 3 onwards.

Lee set a relentless pace, picking up time all the way round, for a well-deserved success.

Calder Valley Fell Runners took a strong team across the Irish sea for the club’s perennial pilgramage to the Mourne Mountains, which has been the destination for the Irish part of the annual British Fell Running championships in recent years.  This year’s race was the very tough Slieve Bearnagh race in the stunning Mournes, a severely undulating race with 2,700 feet of climbing in less than five miles, featuring the ascents of Slieve Meelbeg, Slieve Bearnagh and Meelmore.

As in previous years there were great team successes as well as some notable individual performances from the Calder club.  Karl Gray continues to improve from the very high standards he has set in recent years with yet another top ten in a major race, this time in sixth.

But the performance of the day was surely from Calder’s Gavin Mulholland who really broke into the big league with a marvellous 11th place, just seconds ahead of club captain Ben Mounsey in 12th.  With Calder’s Tim Ellis and James Logue in 25th and 26th place only the Borrowdale fell running machine was able to outstrip Calder Valley with the Calder men finishing second team.  In the individual men’s race recent Three Peaks winner Joe Symonds led the way, just seconds ahead of Bingley Harrier’s Rob Jebb, who then went on to win the Fred Whitton bike race a day later in the Lake District!  Borrowdale’s Morgan Donnelly was third as Borrowdale scooped both the men’s and Veteran Men’s first team prizes.  Dark Peak were second Veteran Men’s team, just edging Calder’s Vets into third.  Gary Travis also had a great run, to edge past Mark Goldie in the last few yards of the raceto claim the last place in the Veteran’s team alongside Gray, Mulholland and Logue. Gary’s son Bradley Travis ran well for the Calder team, especially considering the severity of the terrain, with Trevor Murgatroyd the final Calder man to finish. Oh and Fleeter had a cracking run n’all!

Living mountain running legend Angela Mudge was not to be defeated, the terrain really suiting the seasoned campaigner, but Women’s captain Helen Fines had a great run to finish second, descending like a demented demon.  Northern Ireland’s Ciara Largey was third.  With Linda’s Crabtree and Murgatroyd running well, Calder ladies were fifth team.

The annual Calderdale Way Relay used to a be winter fixture and one of the biggest off-road running days in Britain, but the move to the summer means that it is now a lower priority for many of fell running’s top performers and a reduced number of teams and runners battled it out on Sunday than in previous years.  Wharfedale Harriers were winners of the competition for the first time, an indicator of their burgeoning status, with Holmfirth equally dominant as first Ladies team.  With many of Calder’s first choice men in Ireland, Calder Valley concentrated on fielding a strong ‘Mixed’ team and a fantastic run from Jason Westwood and Andy Thorpe on the last leg helped the team cross the line in first place [Mixed Team runners: Alex Whittem & Graham Brown, Sally Newman & Naomi Sharratt, Jo Stevens & Jackie Scarf, Tim Black & Adam Breaks, Trudi Entwistle & Carole Fryer, Jason Westwood & Andy Thorpe]

On Friday/Saturday, Barbara Lonsdale completed a Bob Graham Round in a phenomenally quick time of 20:41 or 20:42 (exact time to be confirmed – either way its 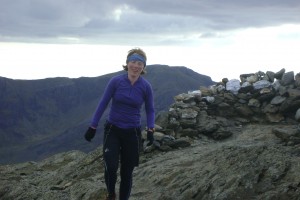 Blessed with clear skies for the whole event, though bitterly cold winds overnight especially over Skiddaw, Barbara kept up a relentlessly strong pace all round; to race back into Keswick with the fastest ever time for a CVFR woman (Anne’s record was set when she was a Macclesfield Harrier).