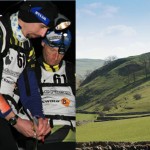 Alistair Morris along with his For Goodness Shakes! team mate, Si Enderby, took the winter Open 5 series crown at the final event of the season in the Peak District this weekend. They finished 2nd in Sunday’s event. Local Phil Scarf took the event victory in the Male Solo class too.

Sunday’s race was the final race out of six of the Open 5 series which is staged across the country from the North Pennines down to the Quantocks. The pair had won three races and took one second place to become overall champions of this popular event. The event comprises of 5 hours of both mountain running and biking with navigation being an important aspect. The pair have endured tough winter conditions in their campaign to win the series. The first race in the Southern Lake District was warm but with heavy rain. The second close by in Bacup threw hail, snow, rain, wind and thunder at the competitors with many dropping out early. Alistair and Si won but with Alistair suffering frost nip in his fingers. The third event was up on the Warcup Firing Range in snow and sunshine. With the army performing manouveurs and checkpoints on tanks there was a military theme to this event.

Sunday’s race was in glorious sunshine in the Peak District centred around Dovedale. The routes took in the steep sided Dovedale – running across rather than up or down to pick up the checkpoints high on the sides. Dropping one checkpoint on the run the pair headed out on the bike with confidence. With many cycleways the riding was fast and a crash an hour in left Si with an injury to his thigh slowing the pair down resulting in them dropping a further two checkpoints to give them second place. Despite this they still beat the only two other contenders for the Series prize ensuring an outright win.

Phil Scarf took on a strong male solo field an won after a fast and well navigated route. The For Goodness Shakes! team also took the Female Pairs Series title and Alistair and Si will be teaming up with one of the pair, Fi McBryde, to take on Britain’s top teams, including the 2009 Adventure Racing World Champions, later this year in both 48 hours and 5 day races as part of the UK Championships.

The result moves Alistair to 4th place in the UK Adventure Racing Rankings based on the last 2 years results.

We had a glorious day for our 25th Anniversary Run – 25 miles on the 25th of March. Rising early after the clocks went forward, 21 runners set off in mist from Mytholmroyd at 8am, soon climbing out into brilliant sunshine on Crow Hill at Sowerby. Original Club members Richard Kellett and John (Bod) Riley started with us, still running, though a little slower than in 1986. After descending to Cragg Vale the group climbed to Stoodley Pike where we were greeted by magnificent views of cloud below us in the Calder Valley towards Todmorden. Returning to Mytholmroyd some members finished their run whilst others joined and more than 30 members jogged, walked and talked our way up to Old Town and then up the moor to High Brown Knoll in warm, summer-like conditions. A return in the afternoon sun around Midgley Moor via Midgley’s Crow Hill took us back eventually to Mytholmroyd again after six hours for much anticipated pies and peas and a beer in the Shoulder of Mutton. Bod was with us all the way round. Almost fifty members of the club ran part or all of the challenging but beautiful route around the hills of the Calder Valley (thanks to Big Al, the route master). The weather certainly helped, and Maria’s catering service at the road crossings was superb, but it was everybody who turned out that made the day a wonderful experience. Several people have suggested that we should do something like this more often, so let’s do it! We have had one plea for kilometers please at our next anniversary! Rod 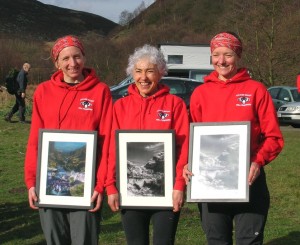 With injuries behind them Calder Valley ladies had a great start to their English Championships with a team win in the Lads Leap fell race at Crowden. The ladies race was won by Emma Clayton of Bingley Harriers in a time of 52 mins 35 secs. Captain Helen Fines led the team with a 6th place finish followed by Jo Waites in 8th and with 3 to count for the team Sally Newman sealed it with 13th position. Waites also took second lady vet 40 only narrowly missing top spot by 12 seconds. Newman not to be outdone was the 1st lady vet 50 and both girls look to be among strong contenders for individual medals in their categories. The ladies also took top spot for the over 40s team with an informe Carole Fryer being the 3rd counter.

The Calder Valley men had one of their best starts to any English championship by taking a fantastic 3rd team spot. The competition was fierce at the front end with the winner being Simon Bailey of Mercia in a time of 44 mins 16 secs. Karl Gray led the team home with a fantastic 9th position and also 2nd Vet 40 overall. Team Captain Ben Mounsey was 15th and with Shaun Godsman (17th), Gav Mulholland (26th) and James Logue (27th) all packing in close together the team position was secured. The vets team also had a great day with a second team placing with Gray, Mulholland, Logue and Goldie being their 4 team counters. 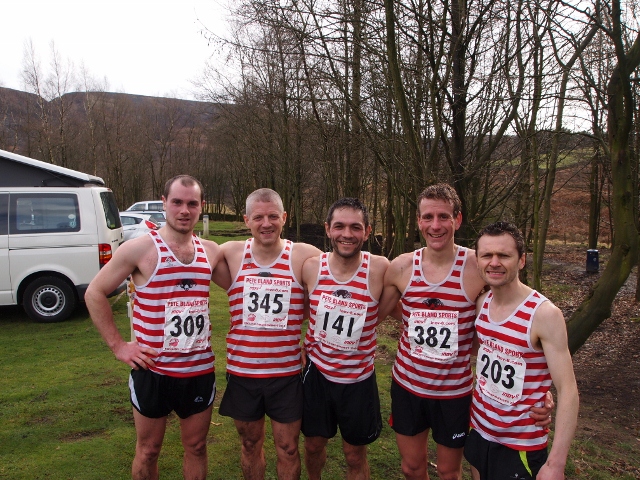 Competitors from Calder Valley Fell Runners took to the hills this weekend in a couple of events where the conditions made for even more challenges than might have been expected. Teams competing in the High Peak Mountain Marathon – an event which starts at 11pm at night and sends competitors off on a 42 mile tour of pathless moors – found themselves able to see only a couple of metres in front of them due to thick mist. Doug Gurr of the ‘Calder Somnambulists’ team reported being pleased to have completed the route in 10h49min, his fastest time ever, and reckoned that the sound route knowledge gained by having completed the race half a dozen times previously helped him and his team overcome the poor visibility. In the same event, Barbara Lonsdale and Alistair Morris finished with team ‘For Goodness Shakes’ in 12h14min. Despite the relentless bogs, made wetter and boggier by recent rains and which were less than helpfully broken up by ‘groughs’ – large ditches full of water and more bog – seasoned adventure racer Lonsdale stoically completed her longest single day of racing to date.

Further north, competitors heading to the Lake District for the Black Combe fell race may have been prepared for the 8 mile course taking in 3400ft of climb, including a vicious second ascent, but were perhaps not expecting the ravages of the hail storm which stung like buckshot on any exposed flesh. Having selected the category A race as his first race back after 9 months out with injury, Chris Standish was clearly not going for the soft option, however he perhaps wished he had compromised on his tough guy appearance in shorts and t-shirt when the hail left him looking like he had a dose of measles. With some big names fighting it out for the top places, the first Calder Valley runner home was Tim Ellis who finished 25th in 1:19:59. Other Calder Valley finishers were: Andy Fleet 1:22:07, Graham Hill 1:28:23, Chris Godridge 1:36:45, Robert Paradise 1:38:30, Chris Standish 1:41:47, and Ryan Colbeck 2:18:08.