The British Fell Relays are an annual event open to all fell running teams from across the UK. This year it was hosted by Westerlands Cross Country Club from Luss on the western shores of Loch Lomond. The relay consists of four legs; a solo short leg, a paired longer route, a navigation leg and a final short fast leg. 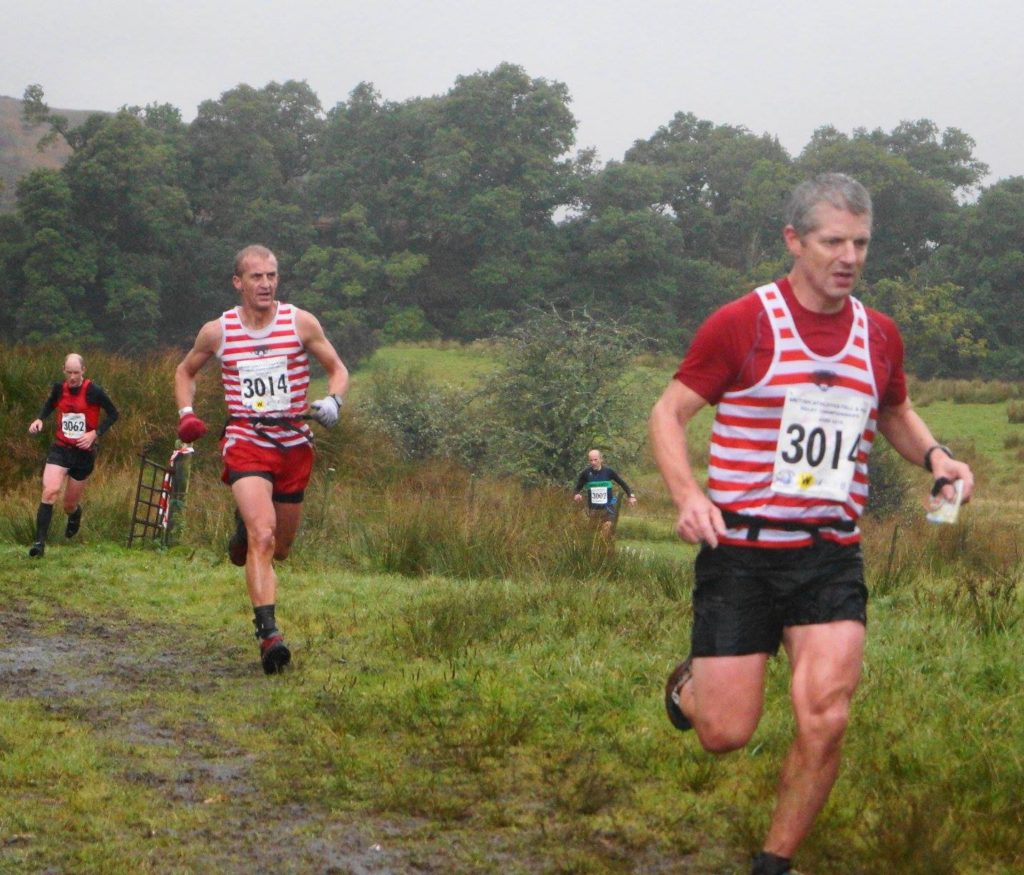 Calder Valley sent a male and female team to compete in the Scottish clag and rain, the men aiming to repeat their win of last year. Anne Johnson made a good start for the women finishing in fourth place in a shade over half an hour. Lucy Collins and Gayle Sugden set off on leg two but, foreshadowing later events, Lucy twisted her ankle and had to hobble down to the finish. Rachel Crossland and Helen Buchan made a good start on Leg 3 with accurate navigation. However disaster struck as Helen fell heavily, breaking her leg and ankle. She was stretchered off the fell by mountain rescue and rushed to Paisley Hospital where her ankle was pinned and plated. Lindsey Oldfield ran the final leg but obviously the team did not place. Helen is hoping to make a quick recovery, aiming the run the Three Peaks next April. The women’s race was won by Hunters Bog Trotters of Edinburgh.

The men fared better. Young Jack Denton has moved up from juniors to the seniors and ran the first leg. He did well to come in 19th place, just over 3 minutes behind Dark Peak, the eventual winners. Karl Grey and Tim Ellis pulled a few places back on the second leg, and James Logue and Darren Kay gained a few more with some top navigation. This left Calder in 7th place with Ben Mounsey to do the final leg. However with 7 minutes to pull back from Dark Peak it was too much even for Super Ben. He did run the 3rd fastest final leg. So overall Calder men didn’t retain their title but came in 7th. 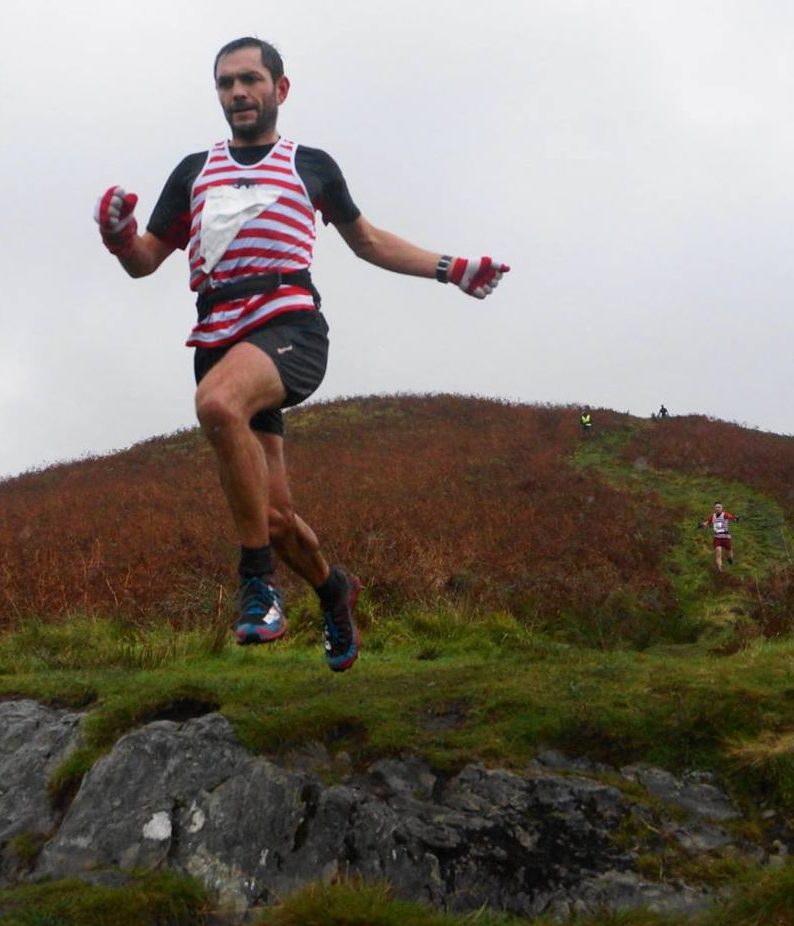 Lots of CVFR were out running on Sunday, orienteering [for EPOC] in the final of the Compass Sport Cup. Of the 13 who scored, were locals Jackie Scarf, Jonathan Emberton, Andy Thorpe, Dick Spendlove, James Williams and Alisdair Pedley. They were assisted by Phil Scarf, Graham Lloyd, Rod Sutcliffe, Mike, Sarah and Helen Pedley, who helped to push rival orienteers further down the leader board. EPOC finished in third place! What a success!

The conclusion of the English Fell Running Championships took place in Langdale in the Lake District on Saturday, and saw Mytholmroyd-based Calder Valley Fell Runners returning with no less than six medals from the season-long championship.

In the male seniors series Ben Mounsey took third, despite his energies being focused on international mountain races for Great Britain, making him the first Calder Valley runner to win a medal in the hard-fought men’s open seniors competition. 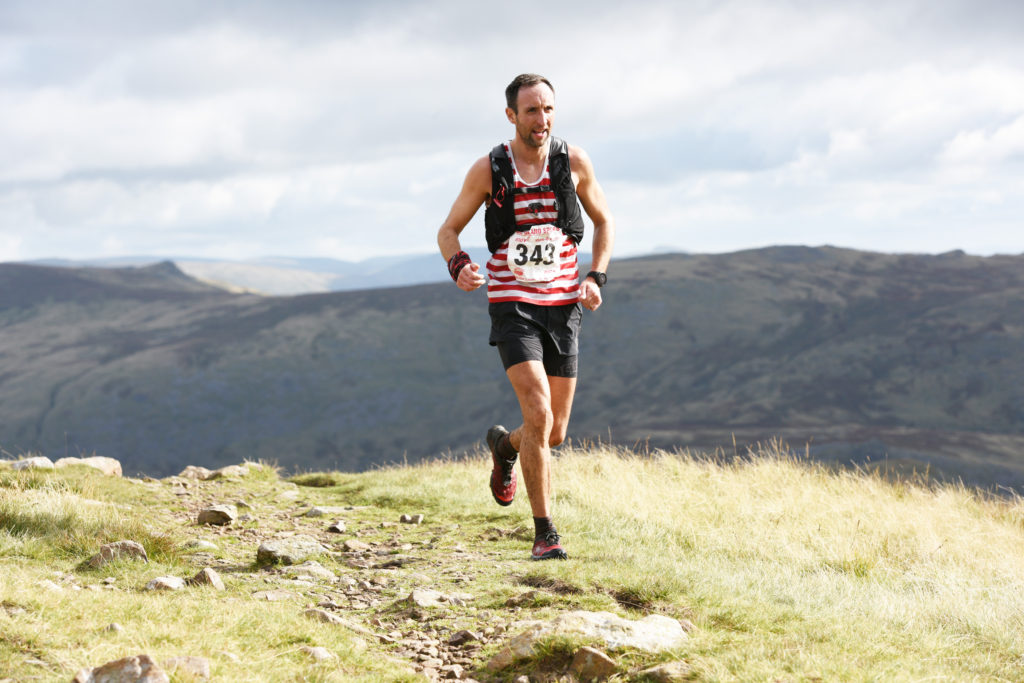 Karl Gray, always at the top of the medal table, was joint first in the V45 category alongside the fell running legend Ian Holmes. Gayle Sugden, despite struggling with a back injury this season, took bronze in the women’s V40 category and Dick Spendlove was an impressive first in the V70 category.

Ben Mounsey’s success came after a tough race at the Langdale Horseshoe, a 13mile race with almost 5,000 feet of climbing, and the final showdown of the championship series.

“I had little expectation for Langdale,” he says, “as the English Championships haven’t been a priority or focus for me this season. However, I knew I was still in with a chance of a medal and I needed a top result to guarantee bronze. With this in mind I set off near the front of the race with the main protagonists and led for the first two miles. At the halfway point, Sam Tosh made a small break at the front and a poor choice of line across Crinkle Crags cost me some vital time.

“It opened a gap that I was never to close and at the top of the final climb I was in 5th place – but most importantly a few minutes ahead of the next runner behind. I knew a sensible descent to the finish would be enough for a podium spot in the championships so I actually managed to enjoy the last mile.

“I can’t express how happy I was at the finish. It’s been an incredibly busy season with huge success in international races for England and Great Britain but this has proved to be the surprise highlight of 2016. It makes me excited to see what next season has in store!”

Gayle Sudgen is equally happy with her performance over the season:

“I knew my V40 category this year was going to be tough, competing against running machines like Lou Roberts, Helen Berry & Mel Price. I was going to have to train and race hard to stand a chance. The races have been great, though the short races don’t suit me so much – I can’t get my backside moving quick enough! I prefer the long stuff with never ending hills. After battling it out all season I’m super chuffed to have clinched bronze.” 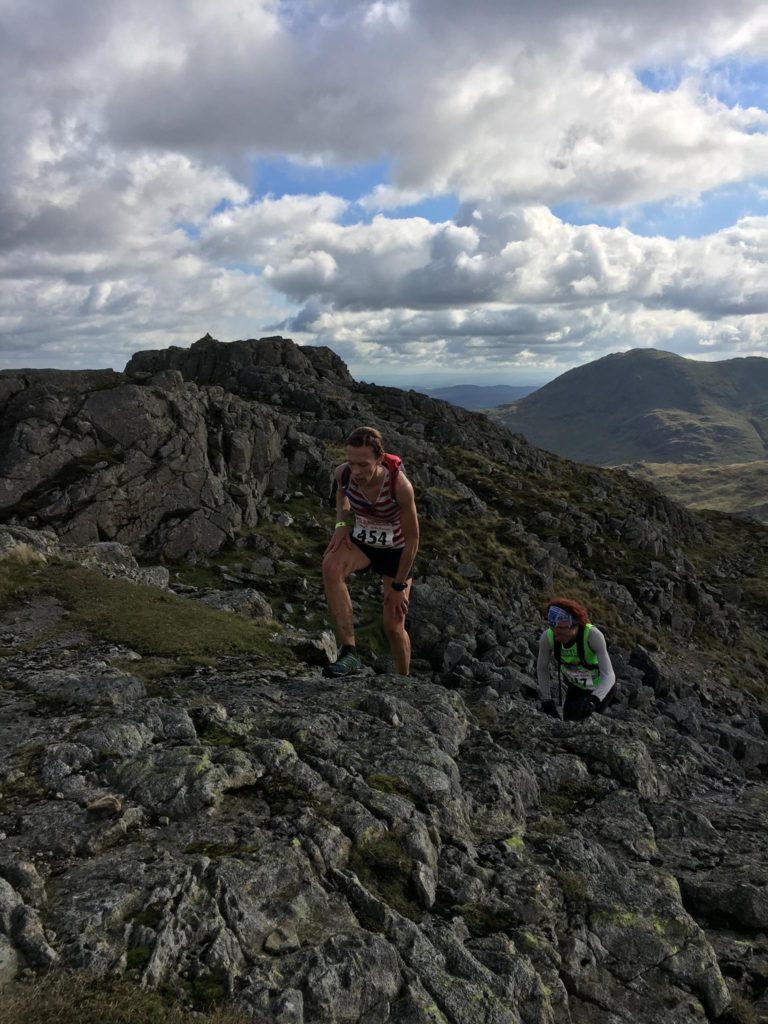 The club also took two excellent team wins: second ladies team and first male V40s. Gayle and team captain Helen Buchan have been instrumental in encouraging the Calder Valley girls to get out and race over the season. The long races were the toughest, yet Lucy Collins, Jo Buckley and Lindsey Oldfield took the challenge of the likes of Borrowdale Fell Race, and along with Gayle got the points needed to medal. Backed up by Helen Buchan and Rachel Crossland who raced hard to make sure that 3 runners got round the races to score the necessary points towards the teams success.

Early injuries looked to have blighted the men’s’ chances but they came through on the later races, with strong performances from a number of runners, including Karl Gray, Gav Mulholland, Jason Williams, James Logue, Shaun Godsman and Darren Kay, taking them to gold once again.

The 2016 season has proved a fantastic year for Calder Valley, due to both strong individual performances and excellent team work. “It’s been the great team spirit,” says the club’s membership secretary and driving force, Thirza Hyde, “just keeping on getting runners and teams out has meant we’ve ended up doing so well.”

There were 15 runners competing in Langdale for Calder Valley, with Mounsey finishing in 5th, Karl Gray in 14th and Tim Ellis in 15th and the club taking the men’s V40 team prize and second in the men’s open team prize on the day. Other who raced this tough Lakeland classic Alex Whittem 65th , Mark O’Connor 101st, Graham Lloyd 368th & Dan Biggs 377th.

The day after Langdale, 15 Calder Valley runners took part in the Withins Skyline organised by Dave and Eileen Woodhead on the Howarth moors. With seven miles and 1,000 feet of climbing, this a shorter, fast race.

The club’s women proved strong in the race, with Jo Buckley taking 3rd, Lucy Collins in 4th and Lindsey Oldfield in 6th place and together securing the ladies team prize. Anne Johnson meanwhile won the women’s V50 category, building on her success last year when she broke the record for the age category.

For the men, Ian Glendinning was first back for Calder Valley in an impressive 28th place out of 290 runners. A good tussle ensued behind him in the V50s category with Mark Wharton and Bill Johnson close behind in 31st and 36th respectively. Others who raced were Dan Marsden 53rd,  Chris Standish 106th, Toby Sydes 116th, Jez Wilkinson 175th, Helen Flage 221st, Steve Cavell 234th,  Philip Jones 231st. 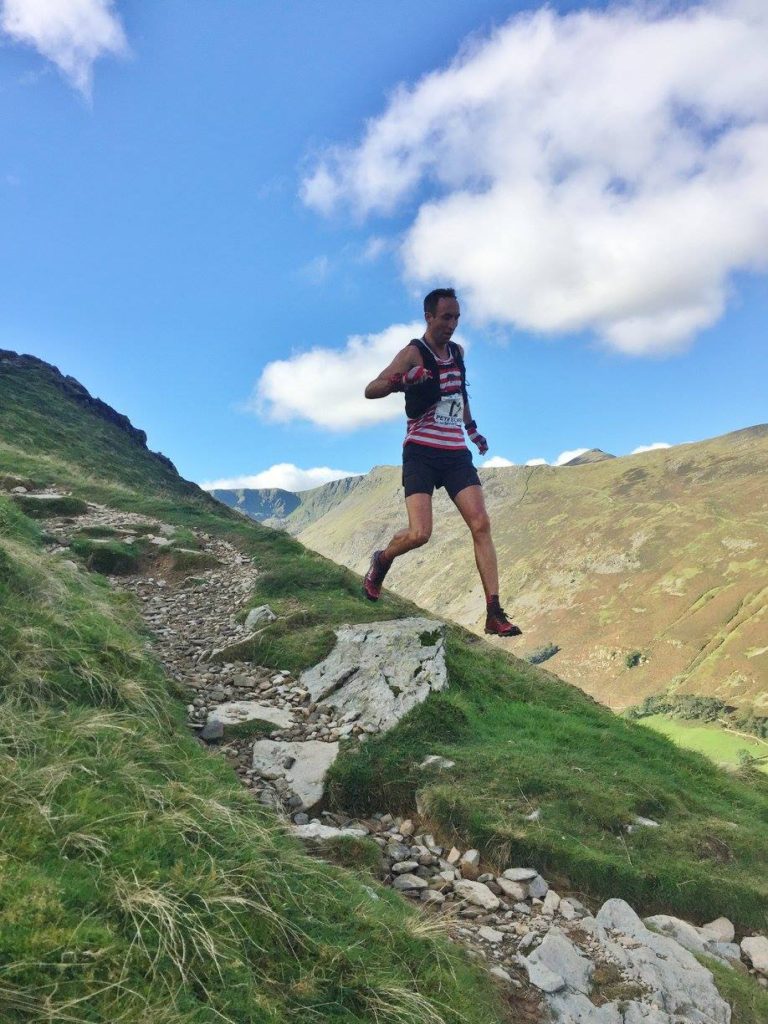 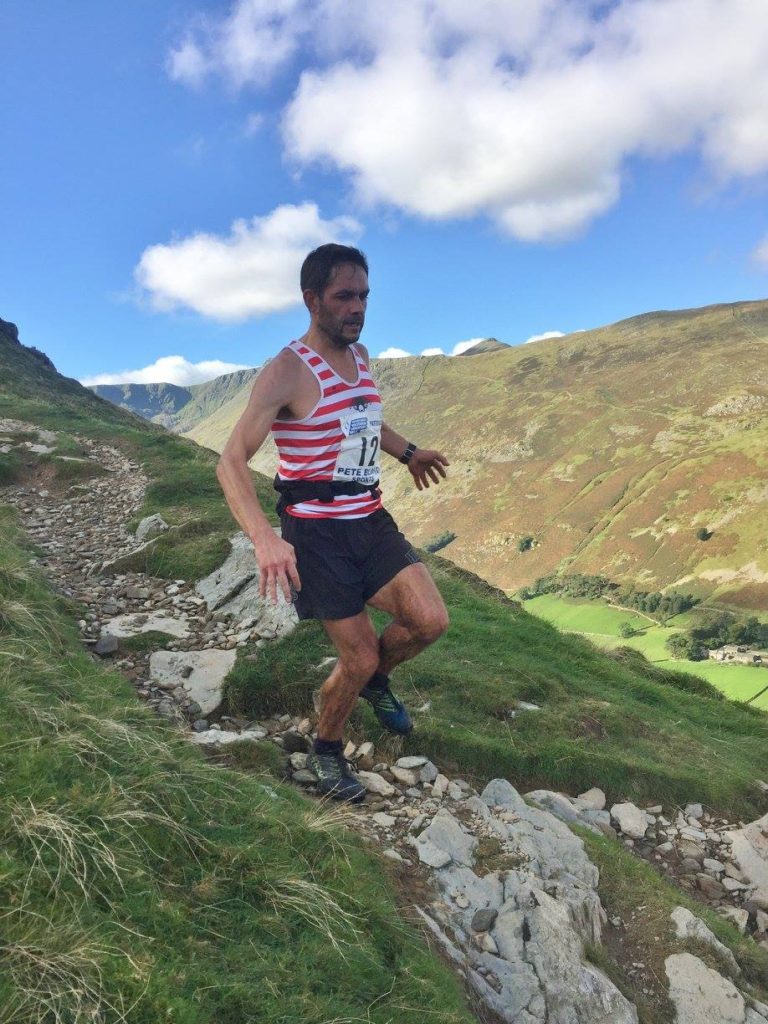 It was a story of the long and the short last weekend for Calder Valley Fell Runners.

Close to home was the brutal Thieveley Pike Fell Race at Cliviger. At just over 4 miles it packs in an impressive 400 metres of climbing, with the competitors heading up a steep climb and coming tantalisingly close to the summit before dropping back down and starting to ascend the Pike again.

Among the 98 runners taking part in the seniors’ race were three from Calder Valley. Alex Whittem put in a strong run finishing 4th in a tough field. He completed it in 35:13, less than 45 seconds behind the race winner. Ian Glendinning, who is getting back to more regular racing now and working his way up the field in the process, finished in 16th place, in 39:37. Racing regular Calvin Fergerson brought the team home, finishing in just over 50 minutes. 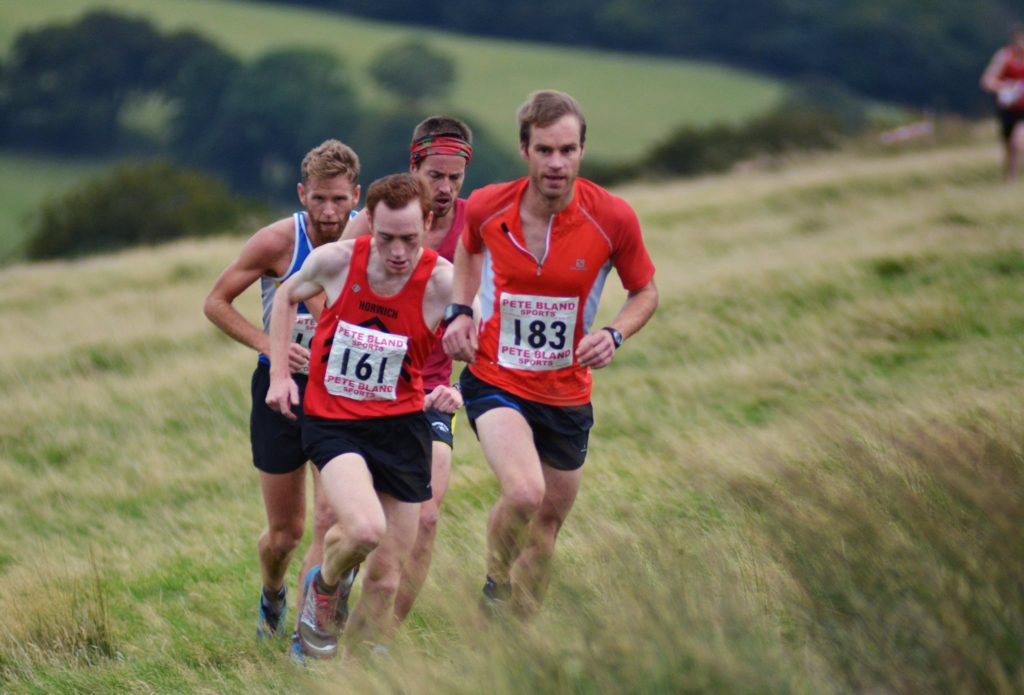 Over in the Yorkshire Dales meanwhile, a bunch of hardy Calder Valley runners were taking on a very different challenge. The Rab Mountain Marathon is a two-day fell running event incorporating orienteering, miles of exposed hillsides and overnight camping in an undisclosed location with just stream water available.

Cragg Vale’s Jackie and Phil Scarf put in a typically strong performance, finishing the long course as first mixed vets pair and in 8th place overall. Linda Murgatroyd and Tim Brooks also competed in the Rab, with Tim and his running partner, Peter Bowles, finishing in an excellent 21st place and Linda and her partner, Elise Milnes, finishing in 91st. 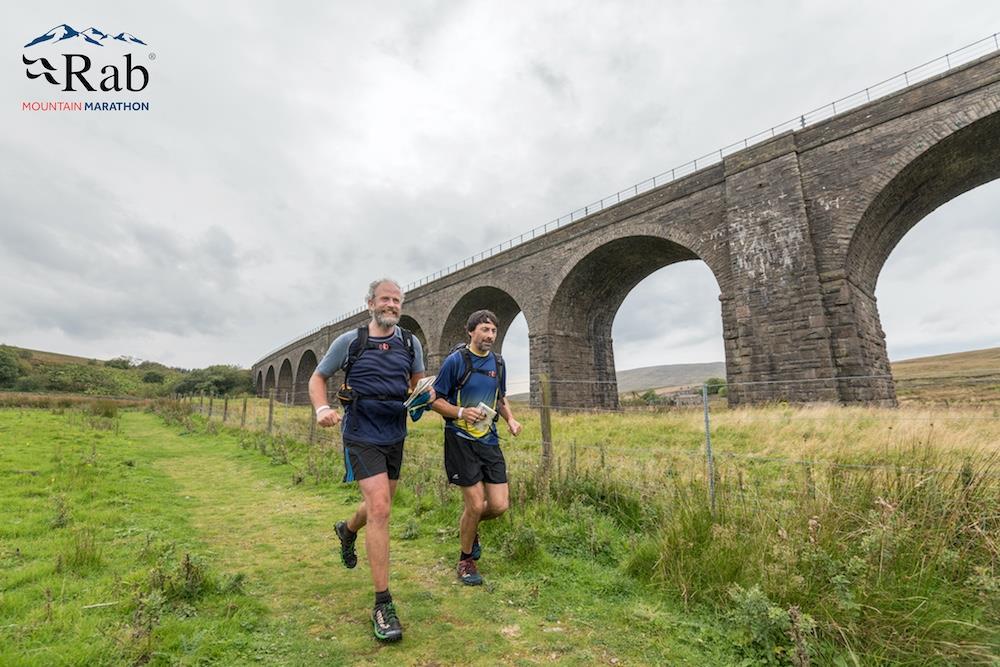 Bill Johnson and John Minta had an very good first day finishing the long course second place, but John had fallen badly and injured his back and the pain took its toll on the second day. They completed the course walking rather than running – though they still finished in 33rd place out of a field of more than 100.