Calder Valley’s Ben Mounsey ran his heart out on Valentine’s weekend for another comprehensive victory.

He finished more than four minutes ahead of his nearest rival at the Windy Hill Fell Race, completing the nine mile route in 56.36.  The event on the hills surrounding Hollingworth Lake takes in fast trails, runnable fells and one all-mighty, memorable climb that takes the total ascent to 1300 feet. 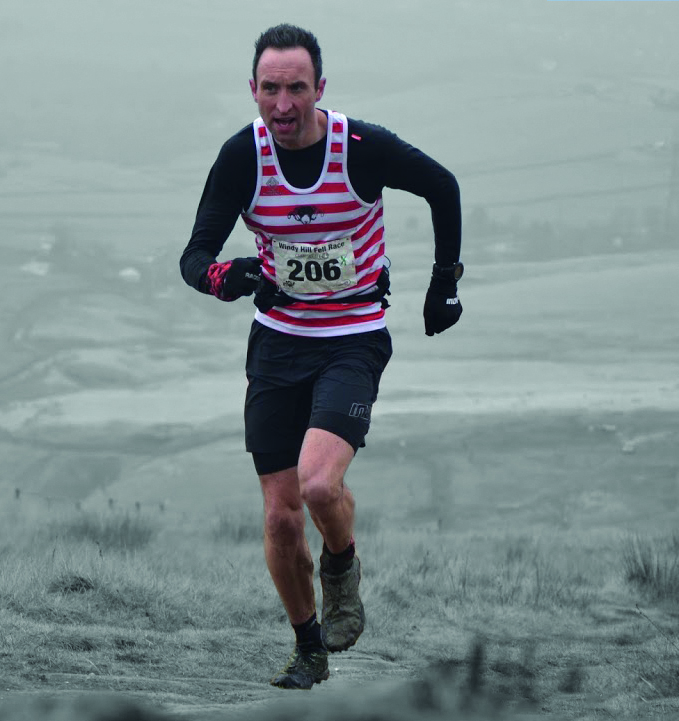 It begins at Littleborough RUFC and immediately opens up into a fast paced, undulating run before being met with the memorable climb, which shares it’s namesake with the race, Windy Hill. Once at the top, runners can see with the whole of South Pennines laid out before them.  An adrenalin packed 4.5 mile descent follows on a rollercoaster-esque trail leading back to the finish.

Mounsey’s victory indicates he has taken his running to the next level, winning his last nine races since coming second to Alex Baldacinni at Trofeo Vanoni in October. Mounsey was delighted with his run.

“The short steep Windy Hill was a complete comparison to the 22 mile Trog the week before – it’s a seriously fast fell race.

“I went out with my usual intention to dominate from the word go and within the first 400 metres I’d established a very commanding lead.“ From there I continued to pull away and worked hard on the steep climb to Blackstone edge to widen the gap.

“Had it not been for the headwind it would’ve been a very quick time but that section slowed me down a tad, as did the boggy, wet ground”.

The Calder runner is looking a strong contender for the 2016 British Fell Running Championship, with the first counting race at Blackcombe in March. Jon Smith was a fine seventh and Ben Frenchette a creditable 23rd for the Valley who took the mens team prize. 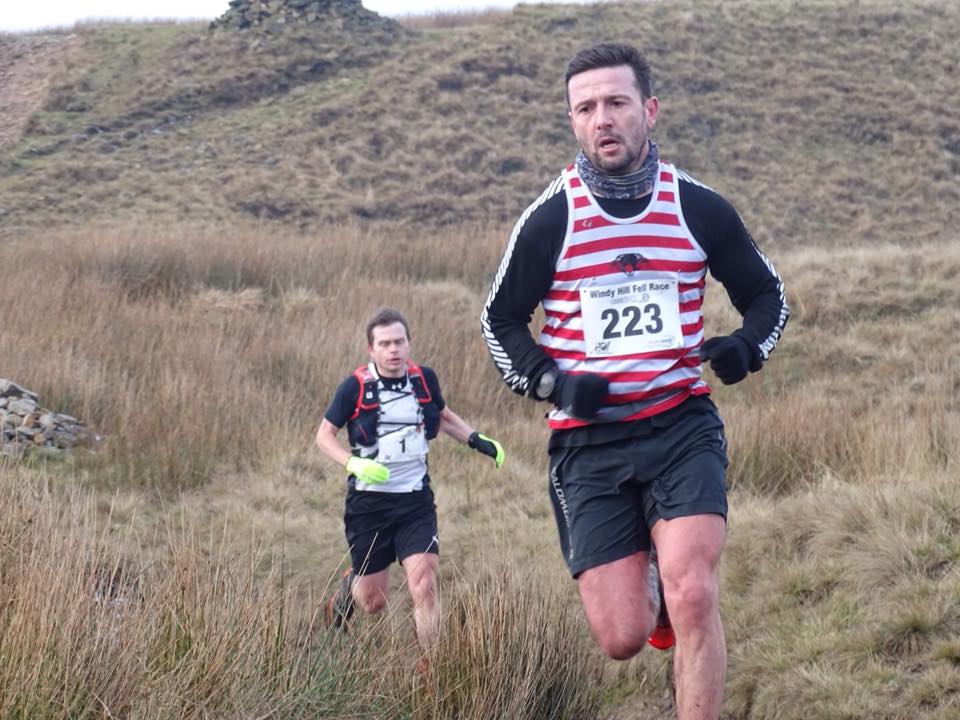 It was a successful weekend for Calder Valley Fell Runners. Despite the terrible weather conditions, they mounted up a rack of wins, including individual and team prizes for some tough races.

The Wadsworth Trog, organised by Calder Valley’s Simon Fisher and is a local classic. Named after the moorland bogs and trods that provide the route, it is a hard 19 mile fell race, often dubbed the ‘Beast’. In something of a tradition, after a similar finish at the Hebden 22 last month, the race was won jointly by Valley’s Karl Gray, currently the course record holder, and Ben Mounsey, who has had an incredible start to another season. They came in together in just under 2 hrs and 40 minutes. 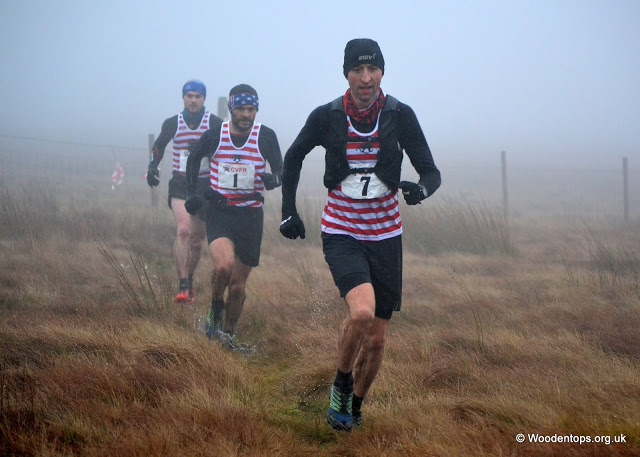 Ben said he felt strong throughout the route and the pair had a big lead on the rest of the field from early on. “Any signs of worry quickly disappeared as I skipped up effortlessly” he said. “10,000ft+ of hill climbing every week has obviously served me well.” But, he added, the conditions made it a hard race.

“Karl and I had already signed a gentleman’s agreement to share the win so we tried to enjoy the race. We did to a point but the last few miles were tough. Not because of the climbs or terrain but purely because of the weather. I’d lost all feeling in my hands and face from mile 7. Even so I never let the pace drop, Karl clung on for the final 4 miles and we finished together. It was a great day and the beast was finally tamed.”

Two of Calder’s ultra runners were next in the for the club. Ian Symington took 5th place in just over 3 hours, making up the team prize for Calder Valley alongside Ben and Karl. Seven minutes later was Kevin Hoult. 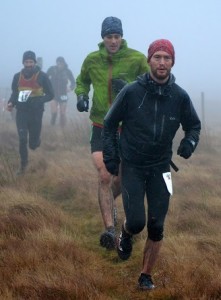 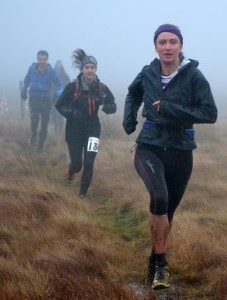 In the women’s race, Calder Valley was also victorious. Holly Page, who has recently joined the club after time away, beat off stiff competition from one of the UK’s leading fell runners, Nicky Spinks, to come in as first lady, and an impressive 13th place overall, in just under 3 hours and 15 minutes. In total, 159 runners, 15 of them from CVFR’s, took part in this tough race.

Over in the Peak District, 17 Calder Valley runners competed in the 14 mile Mickleden Straddle fell race. The women’s team had a fantastic run. Jo Buckley and Gayle Sugden took 2nd and 3rd place respectively in the women’s race, finishing just 15 seconds apart in just over 2 hours. Nicki Latham, racing for Calder Valley for the first time, took the team prize despite suffering an injury to the forehead after a fall. 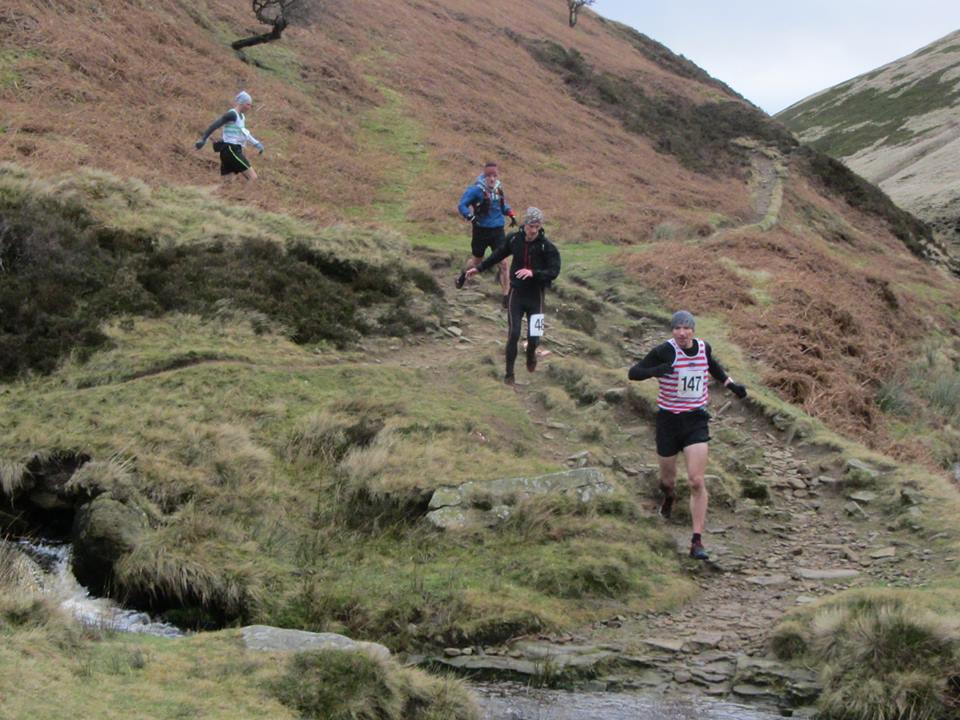 John Smith, who won Calder Valley’s club championships last year, looked to be out to defend his title, taking 6th place, and Mark O’Connor, back from an injury that plagued him most of last year, was 9th. Mark Wharton was the first V50 finishing in just over 2:07. 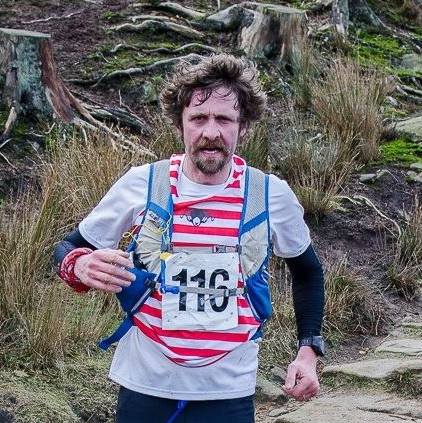 Andy Wright leaving it all out there at the Mickledeon Straddle

Calder Valley Fell Runners held their Winter Handicap race last Saturday. The race is traditionally accompanied by good winter weather and this year was no exception as a squall of hail and snow greeted the runners as they approached Stoodley Pike, at the furthest part of the course.  Several runners were brought to a standstill or at best a slow walk as they tried to round the Monument. 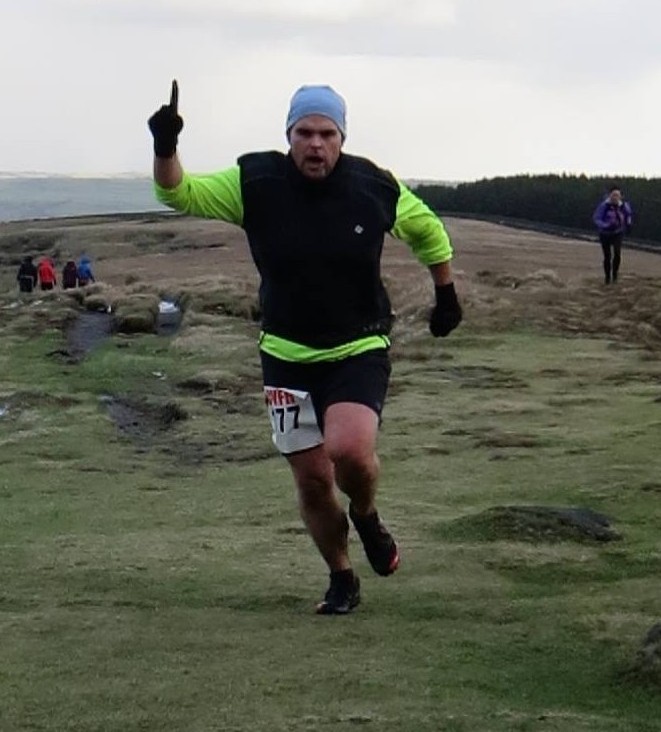 Runners start times vary depending on how well they have raced over the previous year, with the aim that everyone crosses the finish line at the same time. The slowest runner starts first and can often feel like a hare being chased down.  Tamsin Cooke held onto the lead all the way out and back across Erringden Moor but was overtaken by the winner, Dan “Biggernaught” Biggs as they came off the moor towards the finish.  The marshals at the finish line thought Dan was on a mountain bike, the speed he came down Daisy Bank. 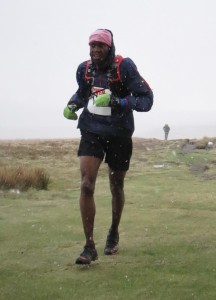 Tamsin approached the finish on Stubbs Field with a good lead between her and third place but the battle between James Cooke and Antony Costello meant that they were both gaining on her fast. As she neared the line she fell flat on her face in the mud and for a moment it looked like her legs had nothing left to give, but keen to keep her husband at bay she found the strength to continue.  Antony gave a super burst and left James standing, and had the course been 20metres longer might have snatched second place. 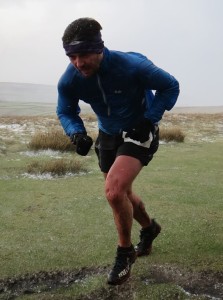 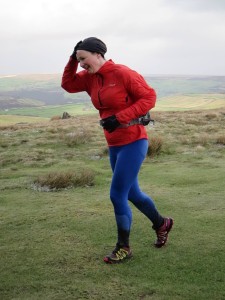 So first place to Dan Biggs, second place, and first woman, to Tamsin Cooke. Ben Frechette was fastest runner in 45 mins 30s and Stella Cristanthou was fastest woman in 58 mins 59s.  Dan has been improving all year after winning the handicap last year, to win it for a second time is a stunning achievement and is a reward for all the hard work he’s put in to his running.

Further up the valley, Gayle Sugden represented Calder Valley Fell Runners at the Hoofstones Fell Race. Starting from the Staff of Life at Cornholme the race is flagged up to the moor.  Runners then have to find their way to three checkpoints, the highest one at Hoofstones Height 479 meters above sea level, before descending back to the valley floor.  There were some interesting route choices as runners were seen coming in to the checkpoints from all directions.  Gayle had a stunning run to finish the 8 mile race in fifth place overall and first woman in 1hour 18mins and 39 second.

Meanwhile, also on Saturday, was the Kinder Trial. Organised by the Rucksac Club, the race varies every year with 12 checkpoints spread out on the moor around Hayfield and Kinder Scout.  Runners are set off at intervals which makes it very much a true fell running challenge.  James Logue was third for Calder Valley in 1hr 42 mins 55 sec, just over four minutes behind tom Brunt of Dark Peak.  Steve Smithies was 30th in a shade over two and a half hours.