Two major events and a prize giving dinner dominated the fell racing calendar last weekend: The punishing route that is the Tour of Pendle, the infamous Harriers vs. Cyclists and the BOFRA (British Open Fell Runners’ Association) Presentation Dinner 2021.

Bingley’s Harriers vs. Cyclists is a great – if somewhat crazy – event, steeped in history. This race sees fell runners take on cyclists on the same course. Runners watch cyclists whizz past them on the flats, & then overtake them on the ascent on the fells. Then the descent off the moor is something of a free-for-all, with spills aplenty – for the film aficionados, Calder Valley’s George Kettlewell describes it as something akin to the Raptor chase scene from Jurassic Park 3G.

For the 2021 race, 167 competitors lined up on the start line on two feet or two wheels to take on the 8.3km (5.3-mile) course, complete with its 288m/945ft of climb. Ilkey Harriers runners won first & second place in the men’s race – a bare half a minute slower than the course record set by famous fell runner Robb Jeb in 2018. This year, the first cyclist had to be content with third place, although the top 20 places were equally divided between runners & cyclists.

Victoria Peel of Hope Factory Racing was the first female over the line, in 35th place overall, winning the women’s race on a bike. Peel fared much better than one of her teammates who snapped his bike clean in two on the way down off the moor!

First over the line for CVFR was Mark Wharton, who decided against competing in the Tour of Pendle at the last minute & opted to go to Bingley instead. Wharton ran a cracking race, finishing the punishing route in 46:49 to take 62nd overall and third in the MV50 category. Reflecting back on a ‘brilliant’ race, which Wharton describes as ‘a proper fell race with the added jeopardy of a load of cyclocross riders careering through’, he highlighted how ‘brutal’ the ‘45-degree uphill start’ & the front-loaded nature of the ascent was, but how this allows for some ‘crazy descents’ on the return. 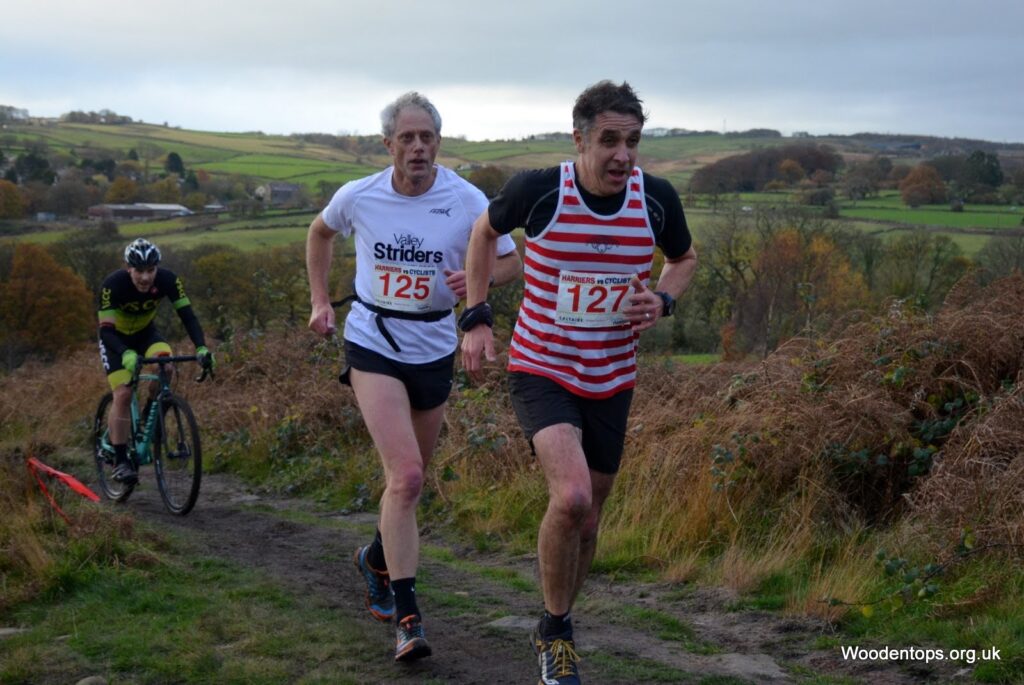 Wharton’s ‘tactic’ was to ‘go all out on the climbs’, hoping to stay in front of the cyclists who typically end up carrying their bikes on the descents (& some on the tricky technical parts of the ascent too). This paid dividends, & he was delighted to survive the descent & finish third MV50, ‘but more importantly’ to also ‘beat about half of the cyclists’, which is what the race is about, after all!

Two further runners donned their red & white stripes in Bingley. Next over the line was George Kettlewell, who despite describing it as ‘a tough day out’, still found the juice to race the nearest runner all the way, edging him out, to finish a respectable 76th in 48:45. Third CVFR over the line was MV60 runner Steven Cavell, who ran strongly to finish second in his age category in 1:08:11.

The Tour of Pendle in the South/West Pennines over Pendle Hill & the adjoining moorland sees runners slog it out over 27km (16.8 miles), complete with 1473m (4833ft) of climb. Whilst results have yet to be published on going to press, it was hardly surprising that not all of the c.330 runners made the time cut-off at check point 3 & found themselves directed back to the start line, to wait for the finishers.

Calder Valley’s Karl Gray decided to give the race a go, despite not doing any real race preparation, as he just ‘loves’ the course & ‘couldn’t resist it’. Although he describes ‘not feeling great’ over the first half, he kept ‘plugging away’, ‘trying to keep the leaders in sight’, knowing full well ‘how tough it gets towards the end’. Gray predicted correctly that there would be ‘time to make up on those who set off too fast’ – & he was able to pull back a number of places on the last climb. 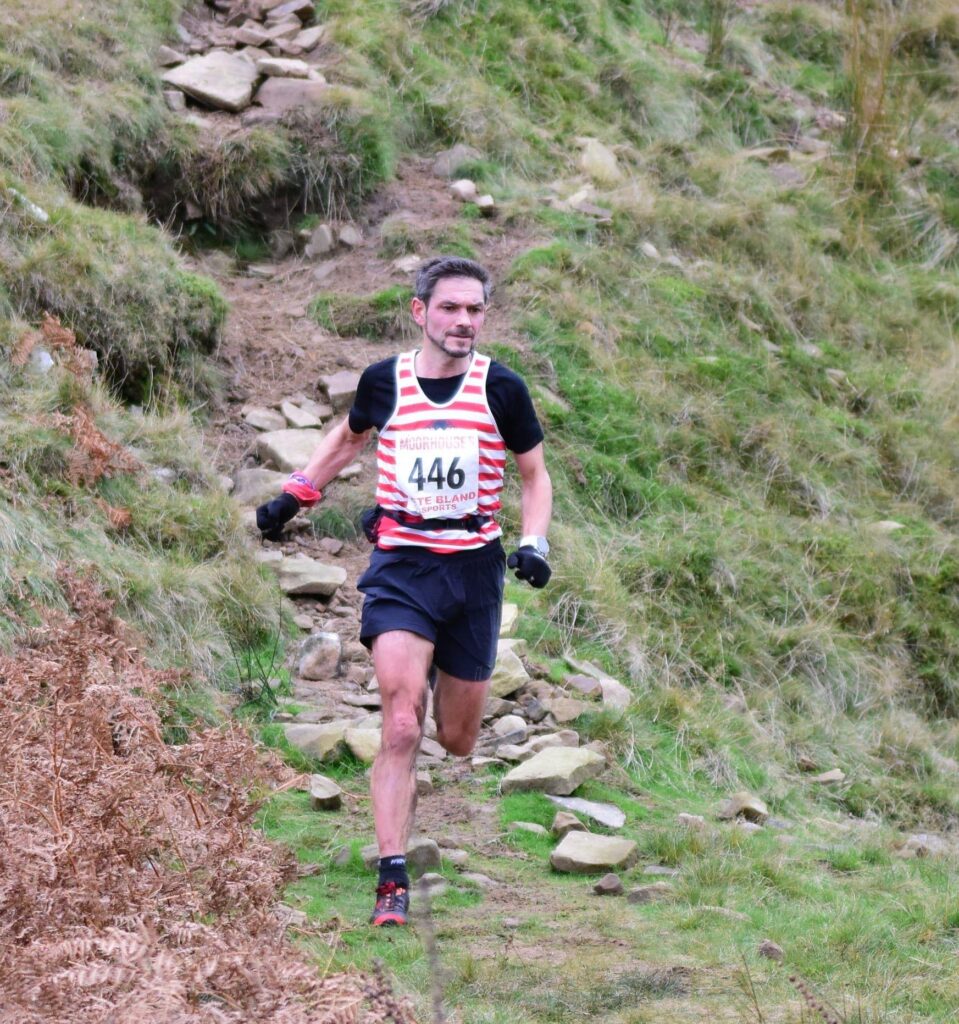 Keswick’s Harry Bolton ran a sterling race & was the comfortable winner, & whilst Gray almost caught second place Ellis Bland of Bowland, the latter held him off by only 17 seconds. Gray was nonetheless understandably delighted with third place overall, finishing the race in 2:25:33. This meant Gray was once again outright winner of all veteran racing categories, including his own MV50 age category. 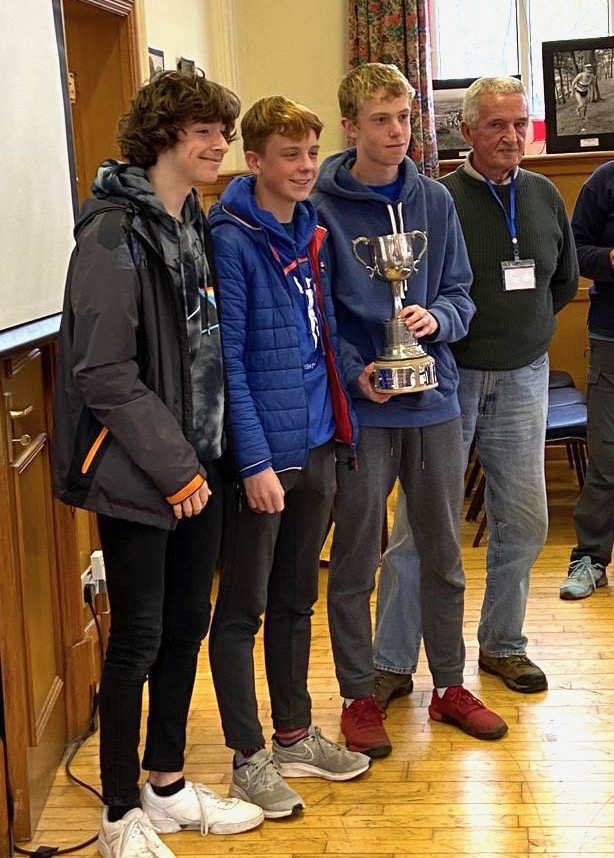 Our U17s doing us proud

Also in Barley on Saturday, but this time away from the fells, CVFR’s junior runners Elijah Peers Webb, Euan Logue and James Aitken were proud to pick up the Colin Driver trophy for the most under 17s fielded at the FRA Junior English championships. Missing from the photo but a strogn part of the team were JD Andersen Martin and Tow Owen. Peers Webb commented, “I was really pleased to be able to represent the club – it was a fab outing & I left feeling inspired by seeing some of the old pictures of the fell running greats”.

At the BOFRA (British Open Fell Running Assocation) dinner on Saturday evening, and not to be outdone by his son Euan, James Logue collected his trophy as the winner of the MV50 age category competition. 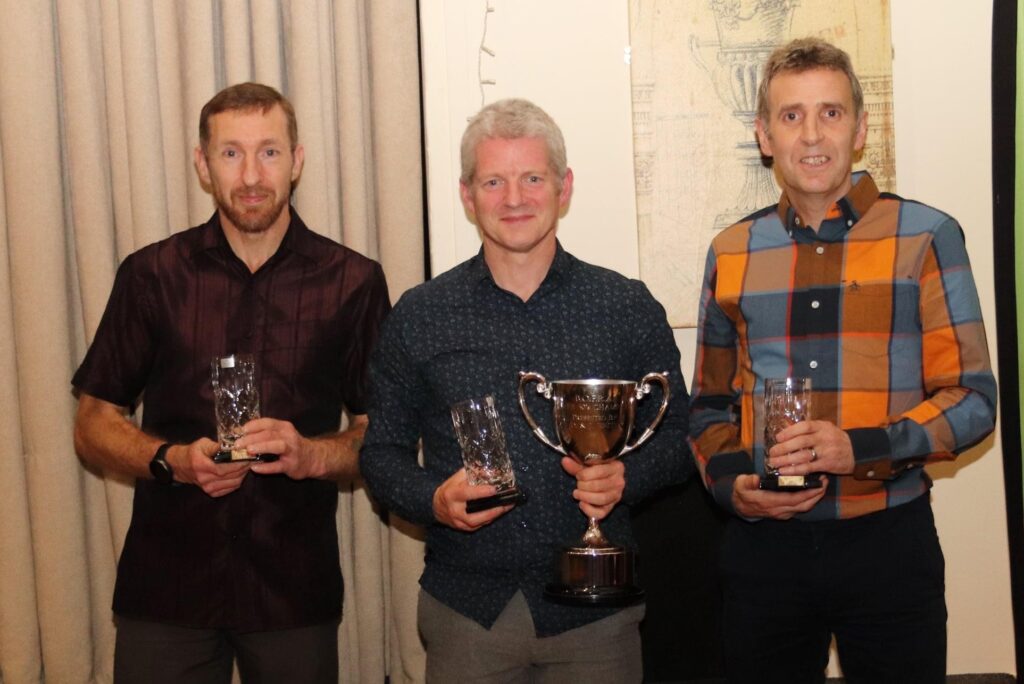 James Logue with his trophy – photo courtesy of Geoff Thompson 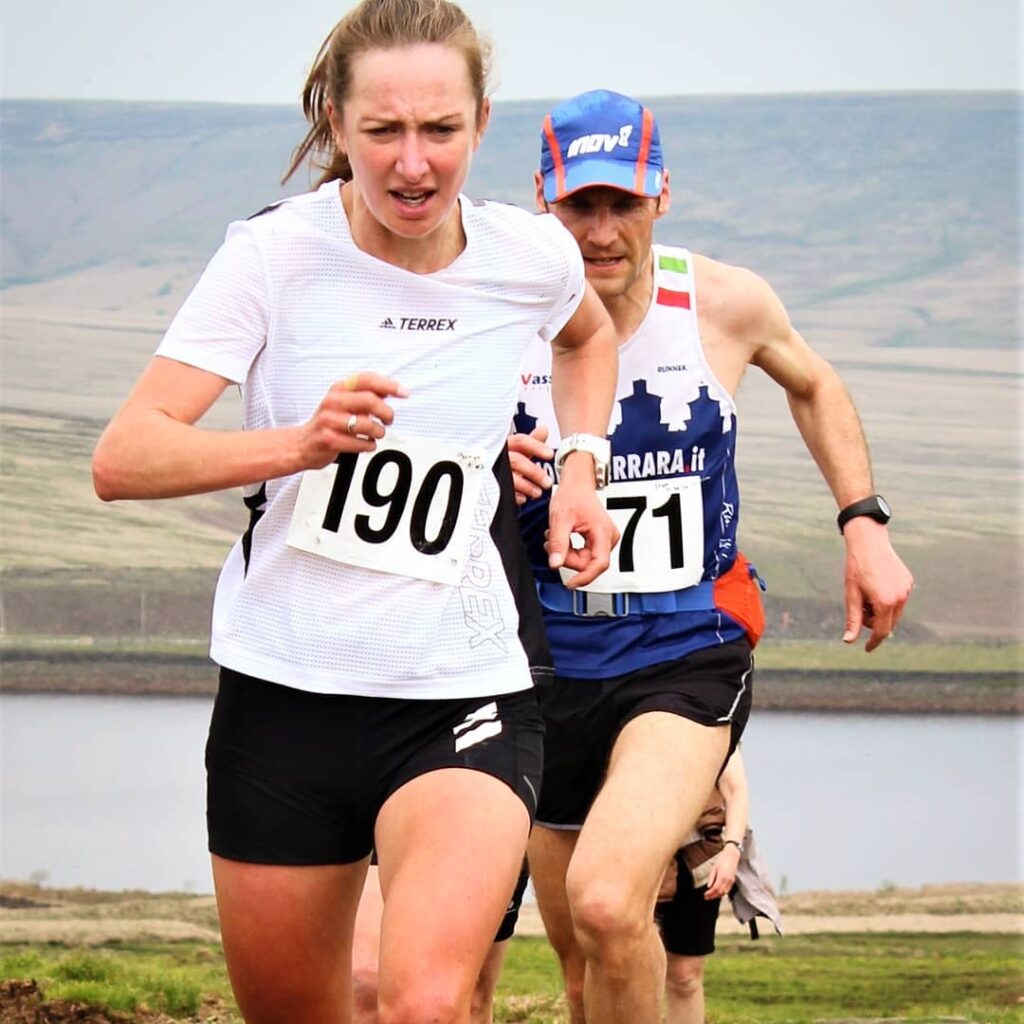 Holly Page came in fourth overall in a strong field and was the first woman home completing the race in a time of 1hr 9mins. The Cake Race, organised by Saddleworth Runners, is a 10 mile blast over the rugged Saddleworth terrain taking in Marsden Moor along the way. Despite spending most of the race working out how to pass other runners on the narrow paths as the ‘wave’ format meant there were 160
plus runners ahead of her at the start, Holly really got her race legs moving and toppled the ladies course record which had stood for 15 years. Traditionally, the Cake Race is
accompanied by a ‘bake off’ at the end but current restrictions prevented this and
competitors had to tuck into the array of baked goods provided by the race organisers
instead. Another record and stunning run by Holly showing once again that women are
increasingly competing on equal terms with men on the fells. 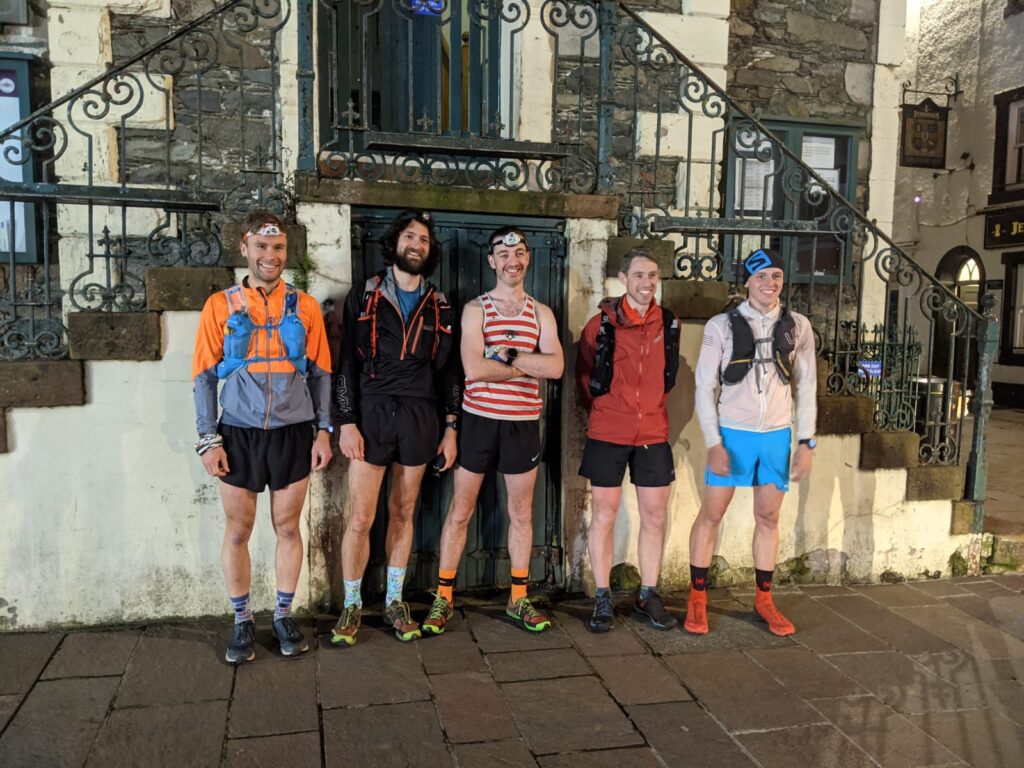 Another weekend and another Calder Valley member taking on a tough
endurance run. The Bob Graham Round is one of the three classic fell running ‘Rounds’ with members of the Bob Graham Club limited to anyone who can complete the classic round within 24 hours. Paul Haigh trained for 6 months for his Bob Graham attempt. Supported by a brilliant crew of runners and a food and drink team, he set off in near perfect conditions completing his round in an extraordinary 20 hours and 10 minutes qualifying for membership of the exclusive club. Paul’s BG is dedicated to a young woman, Phoebe, and he and his team did her memory proud completing the 66 miles, 42 peaks and 27,000 ft of climbing well within the 24-hour target set for the Bob Graham. Paul’s support team really pushed the envelope as they paced him over the Round. A great achievement and part of the brilliant club spirit at CVFR. 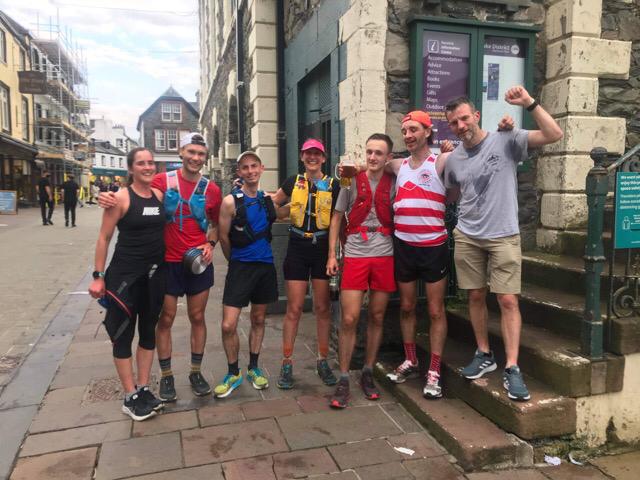 Other Calder Valley members took advantage of the long weekend to race on the fells with a good showing at the Shepherd’s Crook race organised by Rossendale Harriers whilst the Juniors did well in a whole range of categories at the English Junior Championships at West Nab. And in other running, swimming and cycling news, club members were doing what they do best with Max Wharton on the track in his first 1500 competitive race this weekend – not only winning the event but posting a sub four-minute mile time of 3 mins 39 seconds for 1500m. Bethan Gay braved the cold water, a gruelling cycle race and road run of the Windermere Triathlon coming in 4th lady overall, second in the swim and third coming off the cycle section.

A feature of club representation this weekend has been the first sightings of the newly designed club vest featuring the classic red and white hoops with some added features – dales and hills and an updated club badge. The vest was commissioned following a competition to design a commemorative vest for CVFR’s 35th anniversary year. Club member Helen Curtis is the creative talent behind the stunning new design.

Another day to log in the history of Calder Valley Fell Runners as the legend Karl
Gray set the second fastest Paddy Buckley time. In doing so he made it a CVFR 1st
and 2nd in the all time list with teammate Math Roberts holding the fastest time. 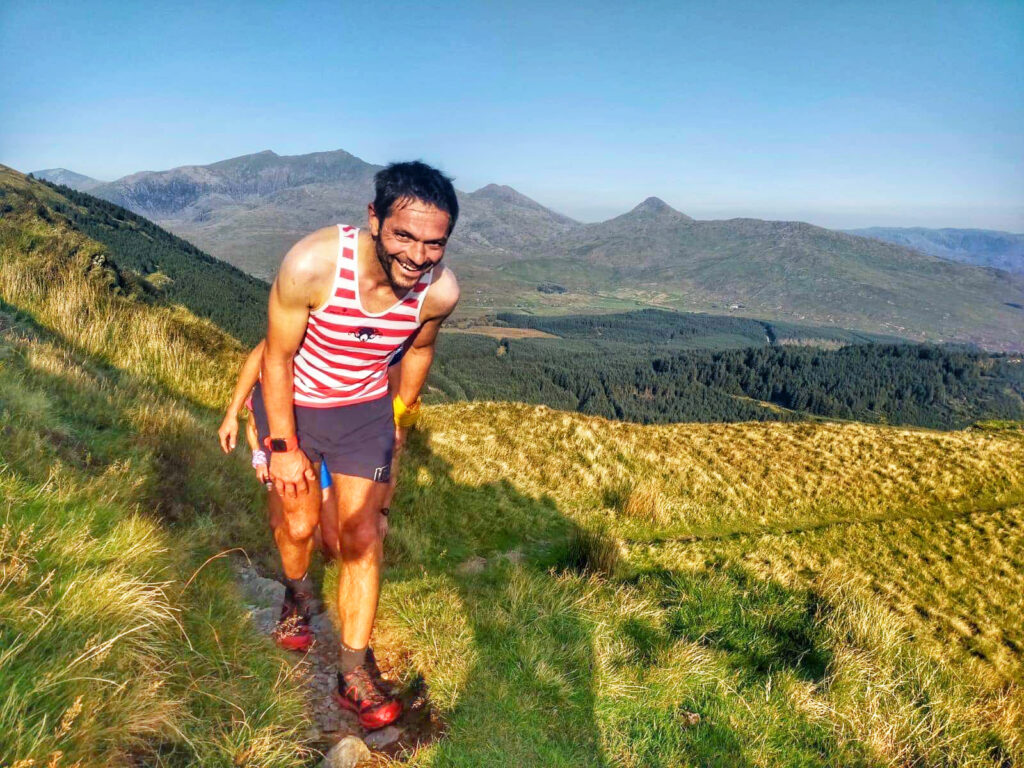 The Paddy Buckley Round, also known as the “Welsh Classical Round” is a long
distance fell running challenge in Snowdonia in Wales. The route is a circuit of just
over 100km long taking in some 47 summits. It has the reputation of being
somewhat tough with very varied and hard terrain to encounter. Karl started his
challenge in Llanberis at 4am on Sunday morning in near perfect weather conditions. 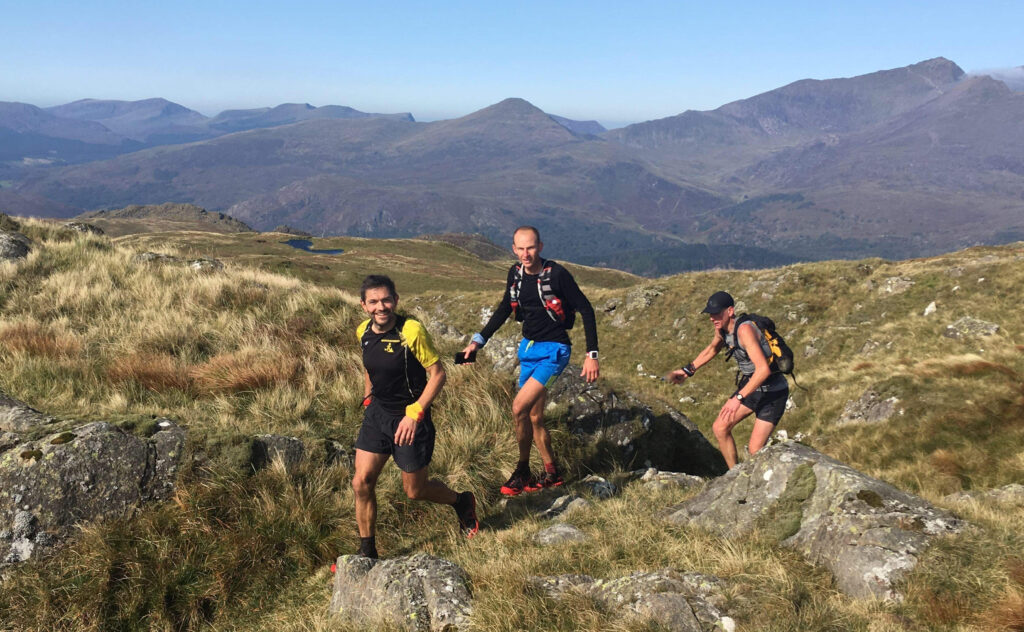 The going was good with fairly dry conditions underfoot after last week’s settled
weather. Moving well at his own pace he tackled The Glyders and then onto the very
rocky and steep Tryfan mountain. Losing a little bit of time on his schedule he was
soon on his way from Lyn Ogwen to Capel Curig and held a consistent pace over
Moelywyns to Betsw y Coed. A master at pacing he picked up time on the next
grassier section to the bottom of the ranger path before tackling the highest summit
Snowdon. With lots of climbing still to do and darkness setting in on this last tough
leg he was only 10 minutes behind schedule. Karl tackled Moel Eilio and had a
strong run back to Llanberis to completed his PB in a time of 17 hours 28
minutes.

– CALDER VALLEY NEWS REPORTER: THIRZA HYDE. With thanks to lee Shimwell for photos and information

In these difficult times, Calder Valley’s fell running stars have provided light for us mere mortals. One such star shone exceptionally bright on Saturday night, when Math Roberts took on and smashed the record of one of the UK’s top fell running challenges, The Paddy Buckley Round. Also known as the “Welsh Classical Round”, the route is a circuit of just over 100km long taking in some 47 summits and 28,000 feet of climb! The Round has the reputation of being somewhat tougher to complete than its English Lake District equivalent, the Bob Graham Round. 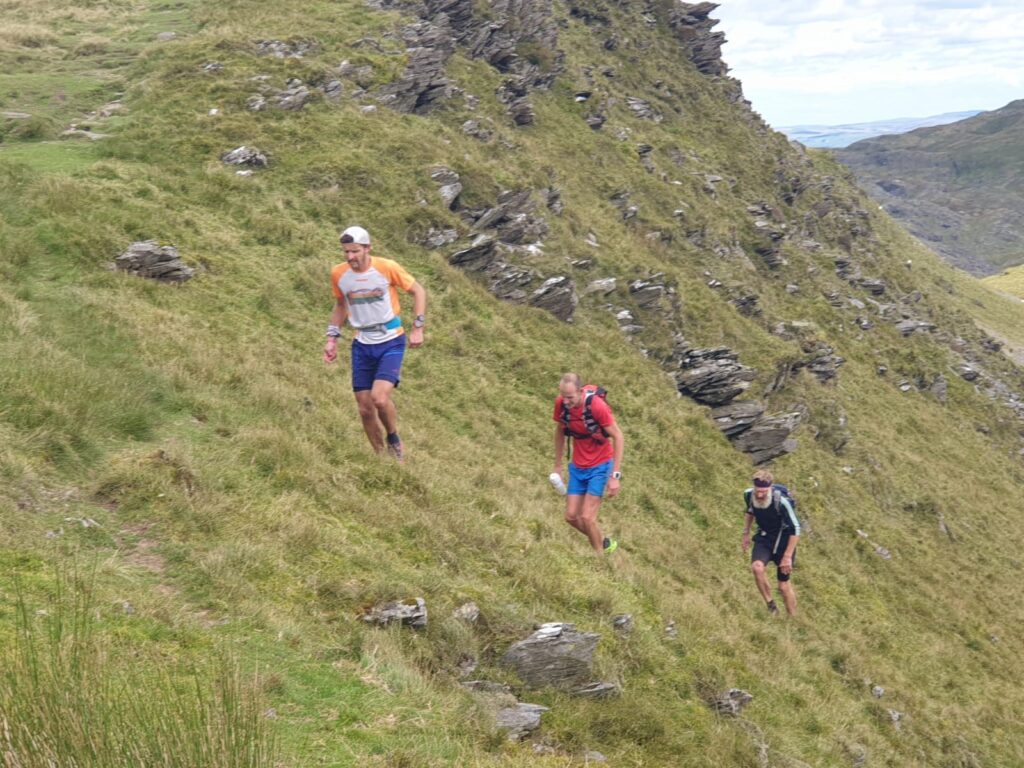 Math Roberts has run himself into the record books, to become the new Paddy Buckley record holder in a time of 16 hours and 37 minutes. An incredible achievement, probably made even sweeter being on home soil. This was a record previously held by international fell runner, Damian Hall in July 2019, who ran 17:31. 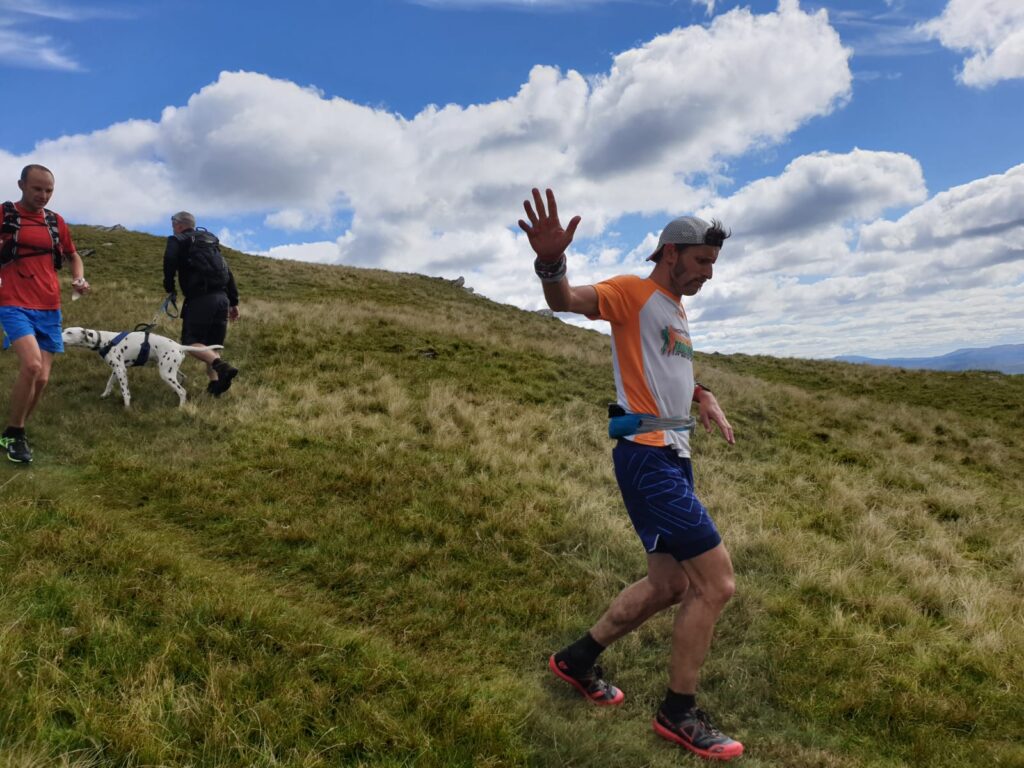 Math Roberts on the Paddy Buckley Round.

Karl Gray, another Calder Valley legend helped support Math, on a couple of legs said:
‘He set off on a 17.16 schedule at 4am. Perfect conditions throughout. Clear and cool temp. He was up on schedule by 18mins after leg 2 and 33 mins up after leg 3. He made more time up on leg 4 but understandably slowed a bit on the last leg! All his support were amazing and they never put a foot wrong! 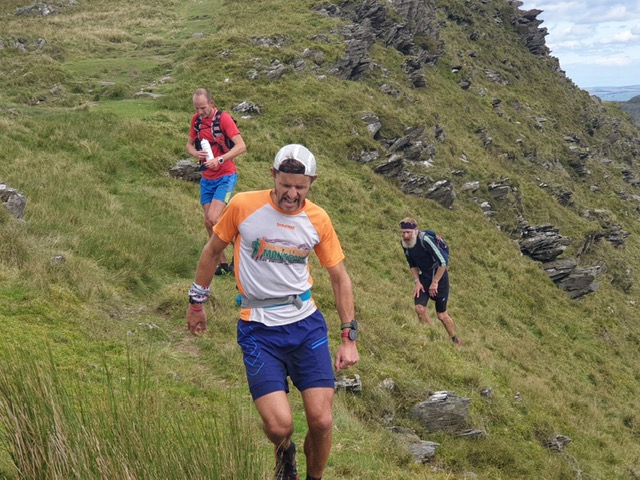 – CALDER VALLEY NEWS REPORTER: Eileen McDonach, with thanks to Thirza Hyde and Karl Gray for photos, quotes and information