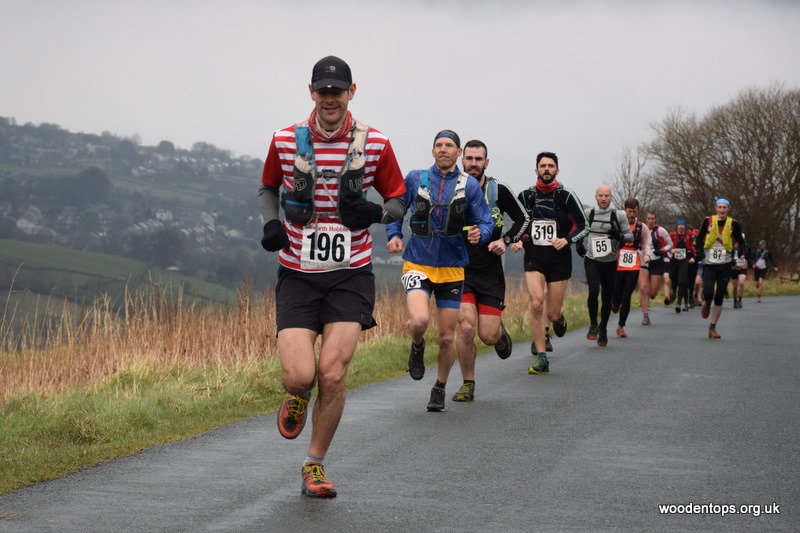 On the weekend of the 14th March, Calder Valley Fell Runners were out in force racing. There were 2 big races on the Howarth Hobble and Yr Aran. The Howarth Hobble is a very challenging one at that, an ultra race with a distance of 31.7 miles with 4396ft of ascent. It was a close fought race for the first place between Calder Valley’s Kevin Hoult and Ken Sutor of Cheshire Hash House Harriers. They both tied first place with an incredible time of 4 hours 16 minutes. Other sterling efforts were from Jonny Croston in 10th, Dan Marsden in 15th, who were both comfortably under 5 hours. Great performances were also put in by Paul Haigh and Elina Eady. If there had been a team prize the ads would have taken it. 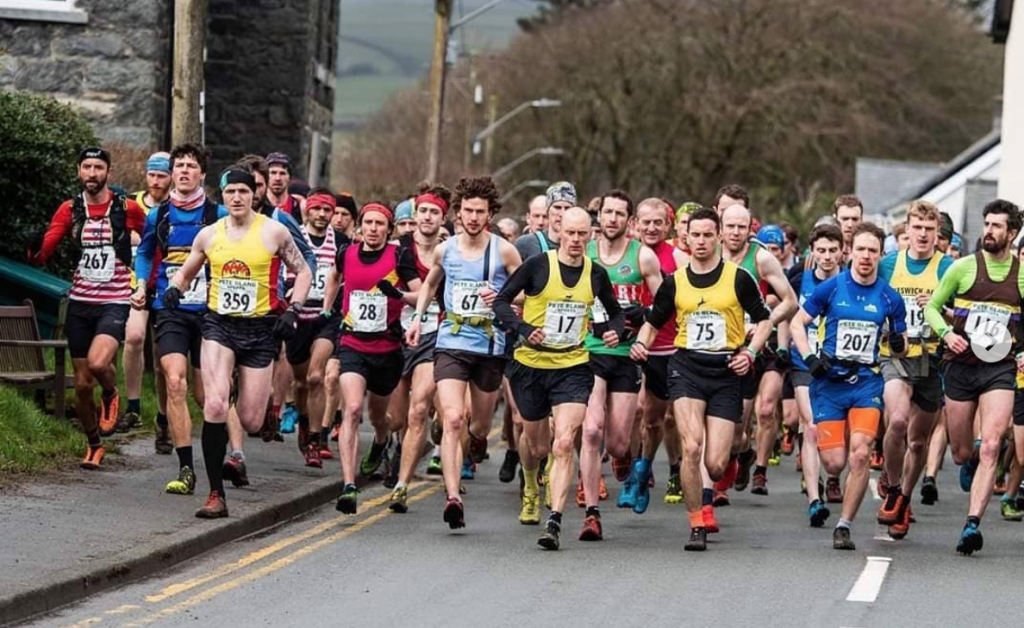 Meanwhile in Wales Calder Valley were well represented at Yr Aran which was the first of the British Championship race counters. A very challenging race in the Welsh mountains with a distance of 10 miles and 3100ft of ascent. Calder’s very own Ben Mounsey had a blistering performance and finished in 9th place in what were testing conditions. Apart from one of the finest ever fell runners Simon Bailey, Ben is the only other runner to have a top 10 finish 15 years apart. He finished 5th back in 2005. With his return from Spain only during the previous week where he was mainly trail racing Ben found the wet and slippery fell conditions tough but put in an amazing performance. 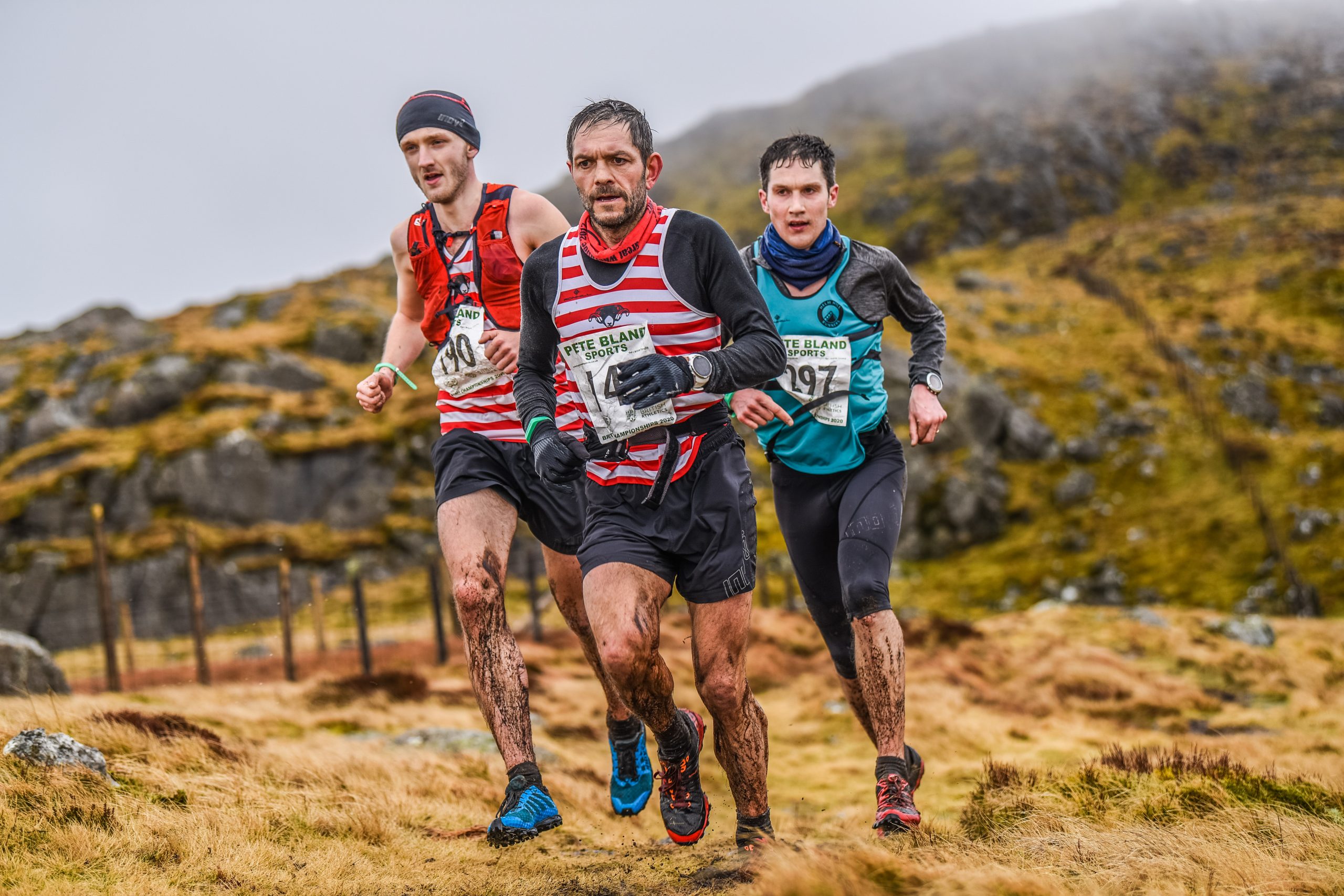 The legend racing hard with Martin hot on his heels 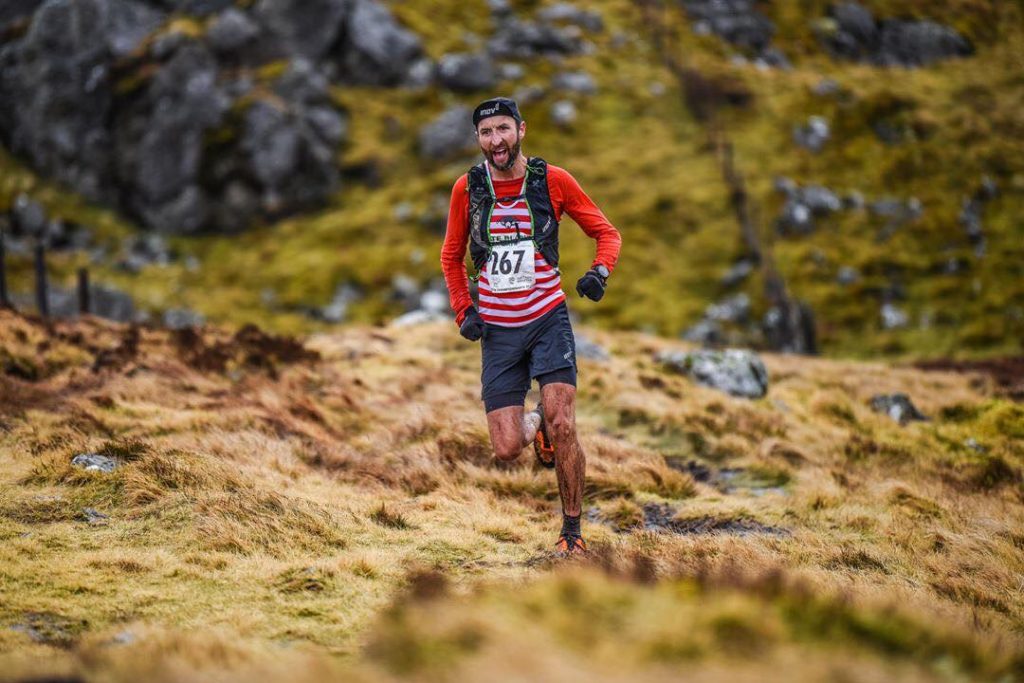 Golden God Mounsey AKA: The Bullet 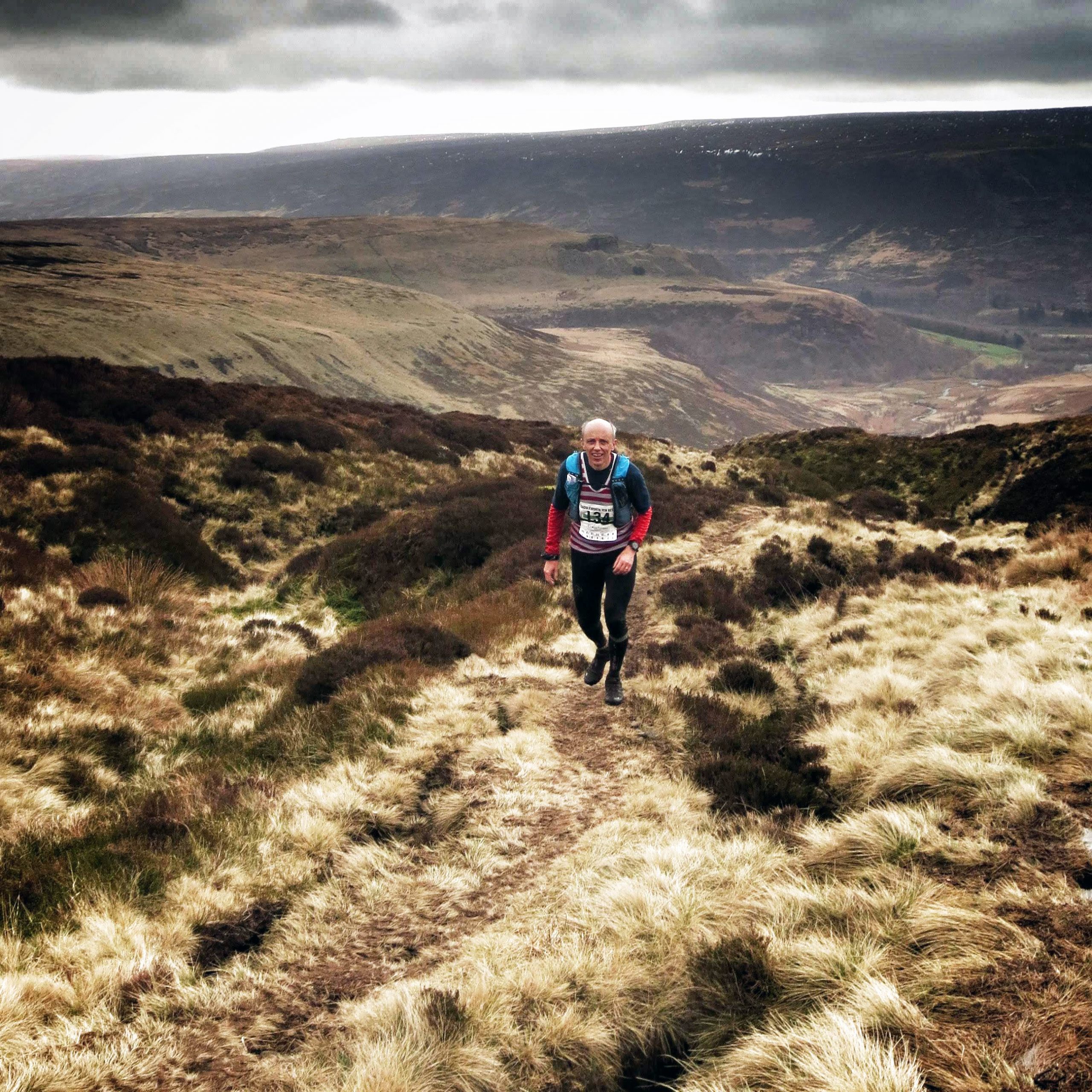 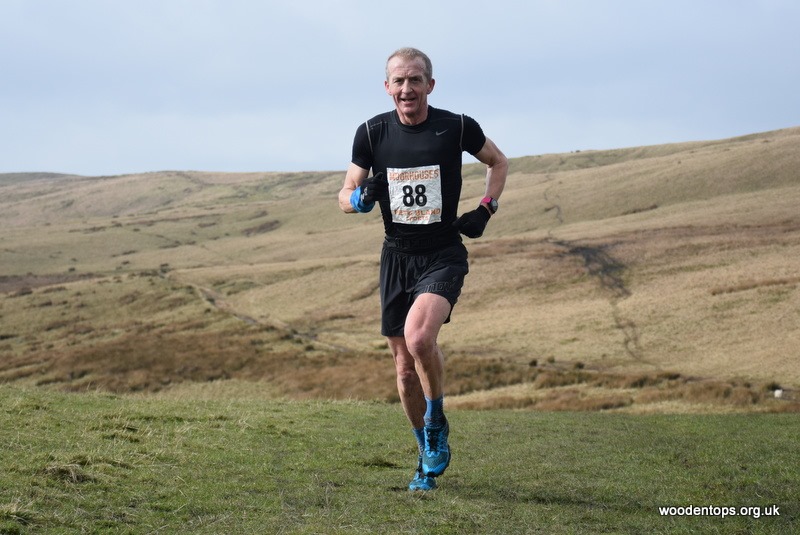 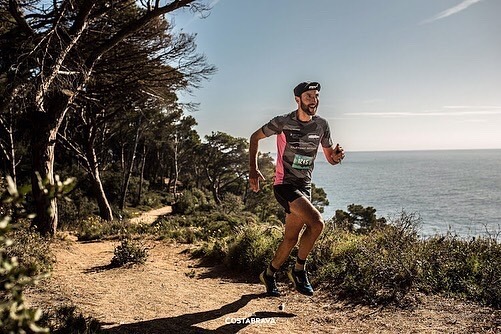 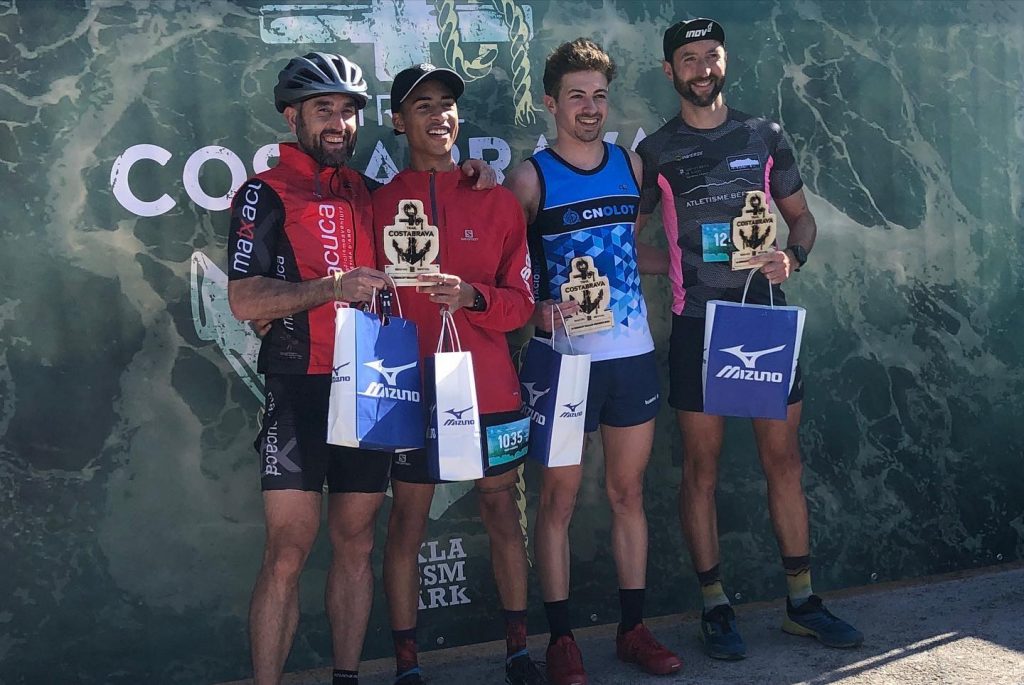 Saturday 8th February – a beautiful day (& quite unlike what was to follow on Sunday) – was also a busy one in the racing calendar for CVFR locally, with both Windy Hill Fell race & Todmorden Harriers Mini-Mountain Marathon Score popular with red & white hooped runners.

Windy Hill is a tough technical nine-mile race, which starts at Littleborough RUFC & continues onto the surrounding hills of Hollingworth Lake – taking in fast trails, fells & one all-mighty, memorable climb up the race’s namesake. Windy Hill, before the second half sees runners race down a fast trail to the finish. This year, Calder Valley’s men raced strongly to secure an impressive half of the first eight places in the male vet 40 category. 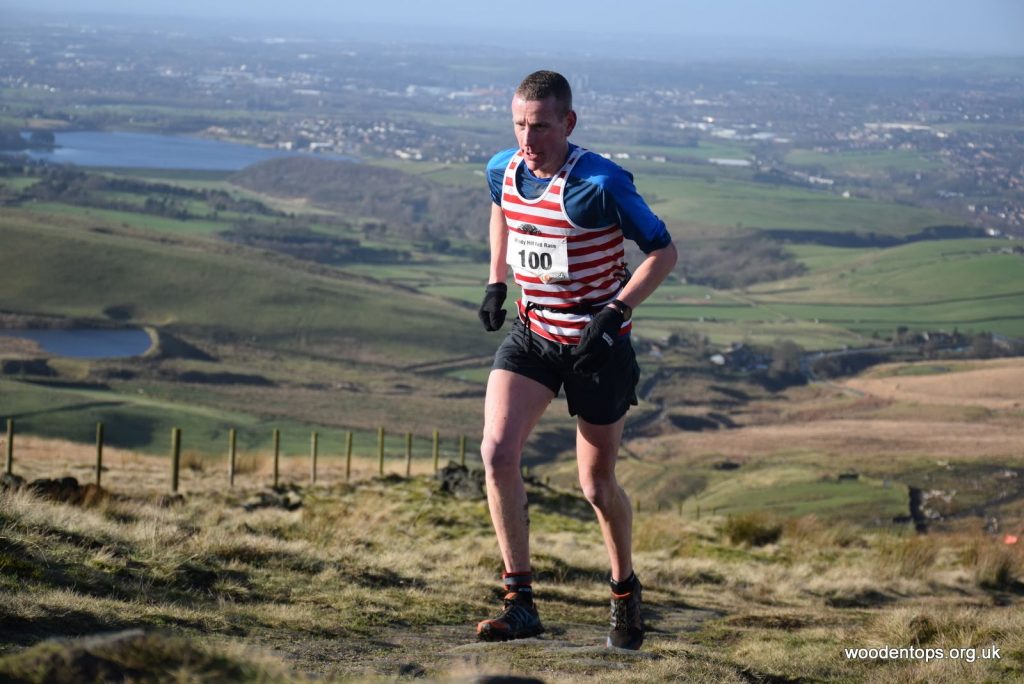 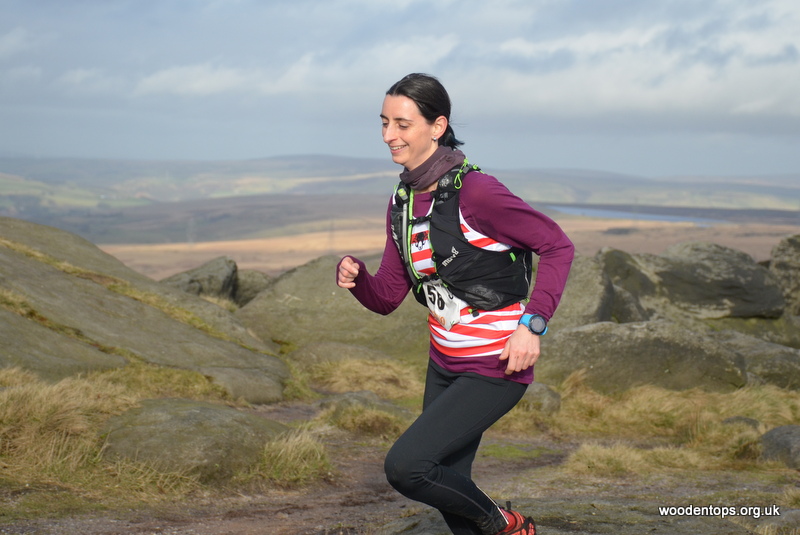 Todmorden Harrier’s Mountain Marathon – also firm favourite – always attracts aa good number of competitors from the club. This year was no exception, with several red & white hoops racing well in this event that requires orienteering & strategic thinking skills as runners determine the route that will allow them to score the most from the different placed & valued ‘controls’ in the three hours allotted (& seeking to avoid the considerable time penalties for returning  late to the finish line).

In the solo races, CVFR’s Simon Bourne finished 3rd (again) behind local legends James Logue & Chris Goddard. Despite a six-minute penalty, Bourne racked up an impressive score of 625 (from a possible 700). Karl Grey also competed well to finish within the three hours & in 4th place overall with 530 points. For the ladies, Tamsin Cooke ran an extremely savvy race to finish 3rd with only a three-minute time penalty & a score of 325.  In the pair’s race Calder Valley’s Jonathan Emerbton & Gavin Mullhound secured first place with no time penalty & a score of 565.

This year’s event took place in beautiful sunshine, offered lots of interesting route choices & a good mix of terrains, including what Bourne described as ‘tussock hell’. However, it will enter into local runners’ lore, for the one high-scoring control which involved the choice of wading (or swimming for the smaller runners) 10m through a deep channel of water or running 700m around it. Racers are still debating which was the more sensible route choice.

Internationally, & in very different weather conditions, Calder Valley’s Ben Mounsey continued to shine this weekend, chalking up a further first place to make it three victories in four races in Spain (after his 2nd place at Montserrat last week). This Sunday’s 22.5lm Trail Les Creus race – complete with 1250m of climb – from Tavernes de la Valldigna in Valencia & was extremely technical in sections, with much of the first descent including roped sections. However, undaunted, Mounsey ran brilliantly, finishing the race in 2h 9 minutes & 14 seconds – nearly 5 minutes in front of the second placed runner & only just shy of an astounding 15 minutes ahead of the third finisher – setting a new course record. He credits this to being able to run ‘really strongly’ from the off & then throughout – ‘opening up a big lead on the first steep climb’, & then maintaining for the rest of the course, He reports how the last month of training has put him in ‘fantastic form’ & he feels ‘really happy to be running so well at the moment’. 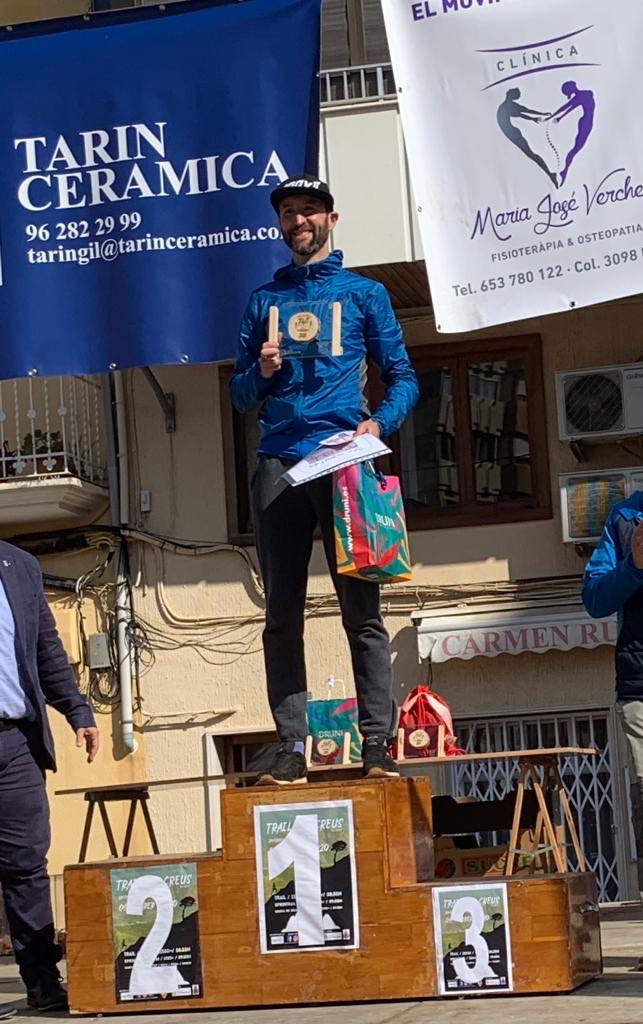 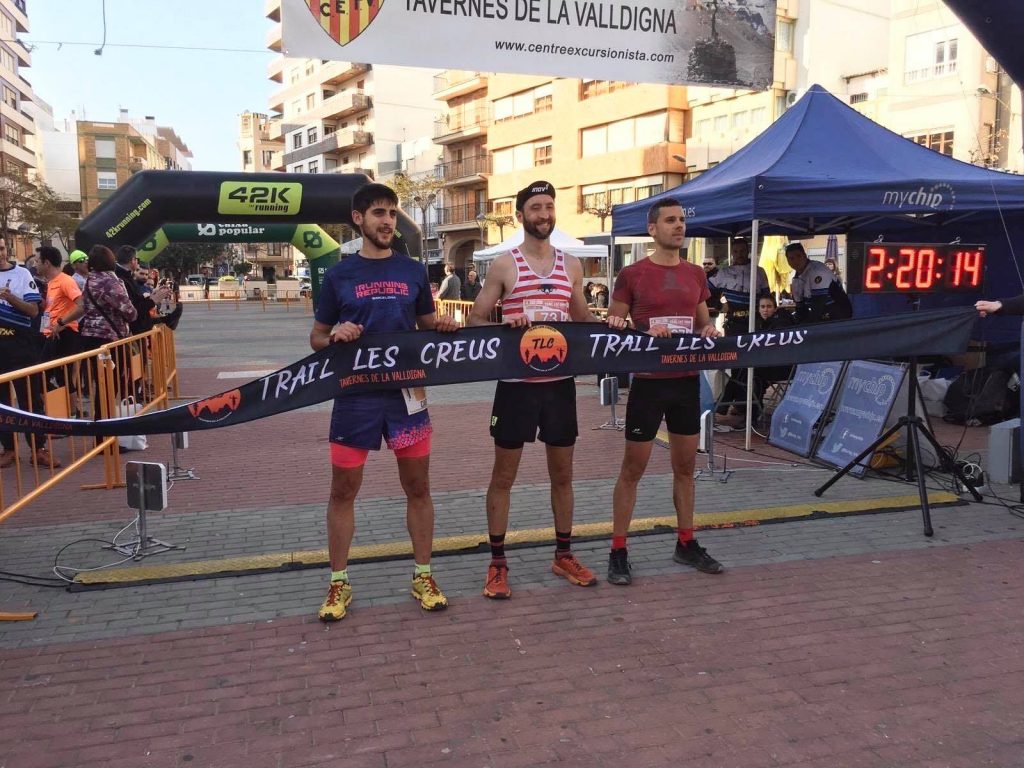 Calder Valley were out in force on the first day of 2020, with thirteen racing at Giants Tooth Fell Race. This short 3 mile course with almost 400 feet of climb helps to get the fell racing year off to a good start.