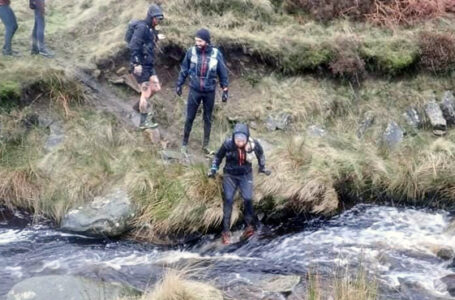 Calder Valley Fell Runners – 10 January 2022 This week saw a couple of the club’s hardiest ultra-runners finish preparations and set off on the Montane Spine race – one of the world’s toughest endurance races. This epic challenge sees … Continue reading →

The Spine Race is touted as Britain’s most Brutal race, covering the full 268 miles of the Pennine Way from Edale in the Peak District, passing through Charlestown, Blackshawhead and Colden to Kirk Yetholm in the Scottish Borders. It’s also held in the middle of winter so competitors have 16 hours of darkness to cope with too.  Tiredness, fatigue, sleep deprivation and exposure to the extremes of winter weather are all to be expected.

Many top ultra-runners had entered this year’s race along with Calder Valley’s, Bill Johnson, Doug Gurr, and hotly tipped Dougie Zinis.  Dougie is building a reputation as an up and coming ultra-runner after winning the 108 mile Spine Challenger race in 2020 and gaining the record for a double Bob Graham, a mountainous 132 mile Lake District route.

Starting a week last Sunday, after a couple of days many of the favourites started to succumb to the energy sapping route.  Kim Collinson, previous winner of the Lakeland 100 and Sabrina Verjee, holder of the Wainwrights record both dropped out, while in the lead, at Malham.  Damian Hall, previous record holder for the Pennine Way and current holder of the Coast to Coast record, then took the lead only to drop out at Alston.  Previous Spine winner, Spaniard Eugeni Rosello Sole was then in 1st place, before dropping out himself after trying to recover by resting at a farm near Bellingham.  This left Eoin Keith to take the win in 92 hours 40 minutes and 30 seconds; bear in mind this time includes sleeping and eating. 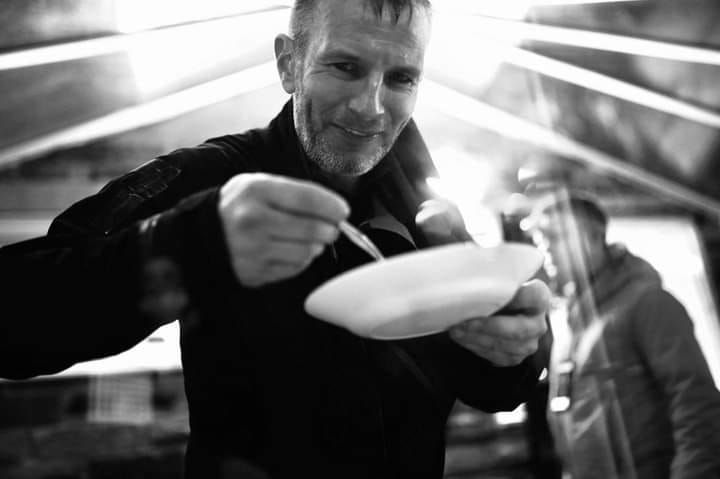 Dougie tucking in for the long road ahead

All this time, self-reliant Dougie Zinis had kept on moving, running his own race.  With Eugeni dropping out, he moved up to joint second place with James Leavesley, winner of the summer version of the Spine.  This pair joined forces at Middleham, and ran together to the end, crossing the line in joint second place after 96 hours 06 minutes and 30 seconds.  Dougie had aimed to finish in less than 100 hours so was pleased with his time.

He said afterwards “I’m over the moon with my race, getting a podium finish was beyond my dreams but also the whole Spine experience, the Spine family, who really treat you like royalty. I’ve met some wonderful people and learned some massive lessons and sure I’ll be back for more.” 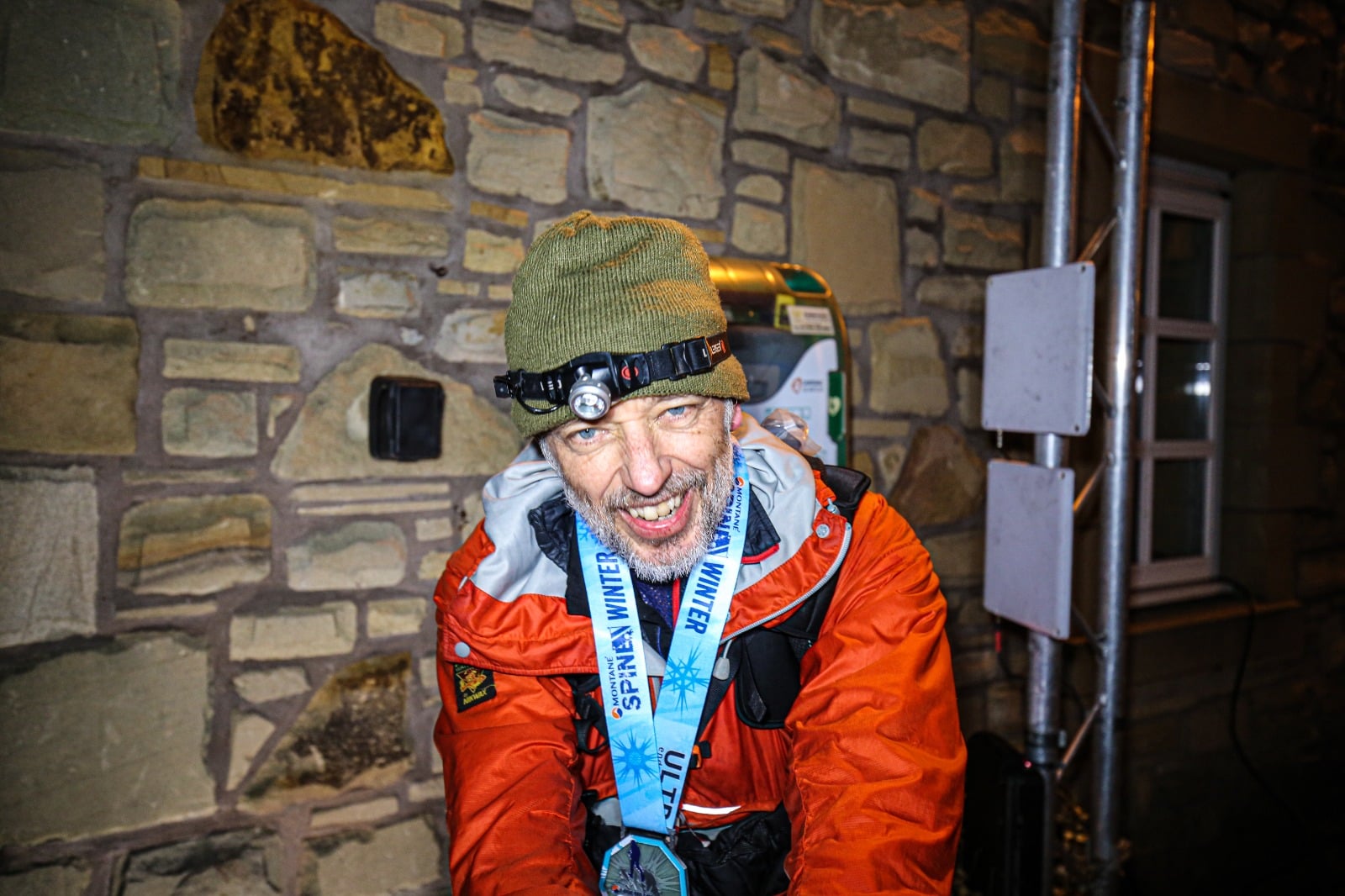 Bill at the end of the Spine

Calder’s Doug Gurr retired at Middleham but Bill Johnson continued, keeping other competitors sprits up, to finish in 14th place in a time of 111 hours 59 minutes and 55 seconds.  Always consistent, Bill had finished in 13th place in 2018 after blizzard conditions in just over 138 hours.

Bill said ‘That race will always take you to the edge. With it being a continuous race, the clock still ticking while you sleep, it is an incredible mental challenge. But my mindset has always been to savour and enjoy the experience, so I was smiling pretty much all the way.

The final couple of days were the complete opposite of the finish in 2018. With fine weather (except at the very top of the Cheviots) rather than deep, soft snow it was a lot more pleasurable! But still so good to finish to a big hug from Anne.
The toughest section for me was crossing Cauldron Snout and High Cup Nick from Middleton (CP3) to Dufton. I was sleep walking and in a bad mental state. Fortunately Matt Neale appeared, kept my spirits up and got me in to Dufton where a sleep in the toilet block and a full English breakfast at the Post Box Pantry at 5am [the cafe stayed almost permanently open to feed the runners] would sort me out.
But it is weird how the body adapts to what is being asked of it. For the last day, north of Hadrian’s Wall, through CP5 and to the finish, I could run again – better than I had since the first day. My body accepted that that was what it was going to do so it just did it. My time up to the top of the Cheviots is pretty much as fast as anyone’s. Then the descent was anything but fast – Hokas may be great for keeping your feet comfortable but they are not designed for steep descents on slippery mud!’ 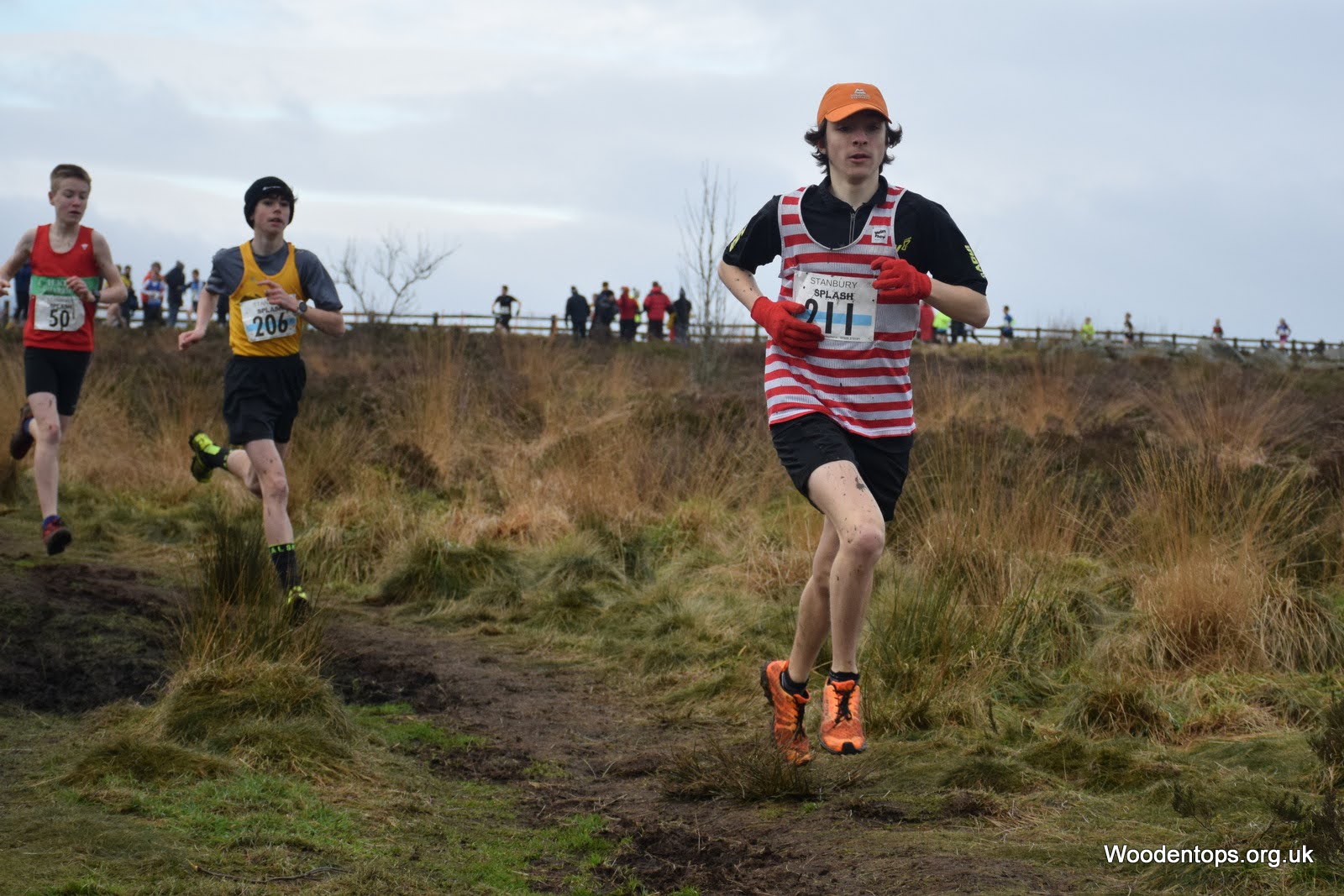 Last Sunday some CVRF juniors take on the Quarry Runs at Haworth, gathering in the forsaken quarry at Penistone Hill for the off.  Elijah Peers-Webb ran in the U19s race. After a boggy start he enjoyed the quick romp home in 3rd place. He’s been taking part in the club’s Thursday speed sessions and they seem to have helped as he usually prefers longer distance. 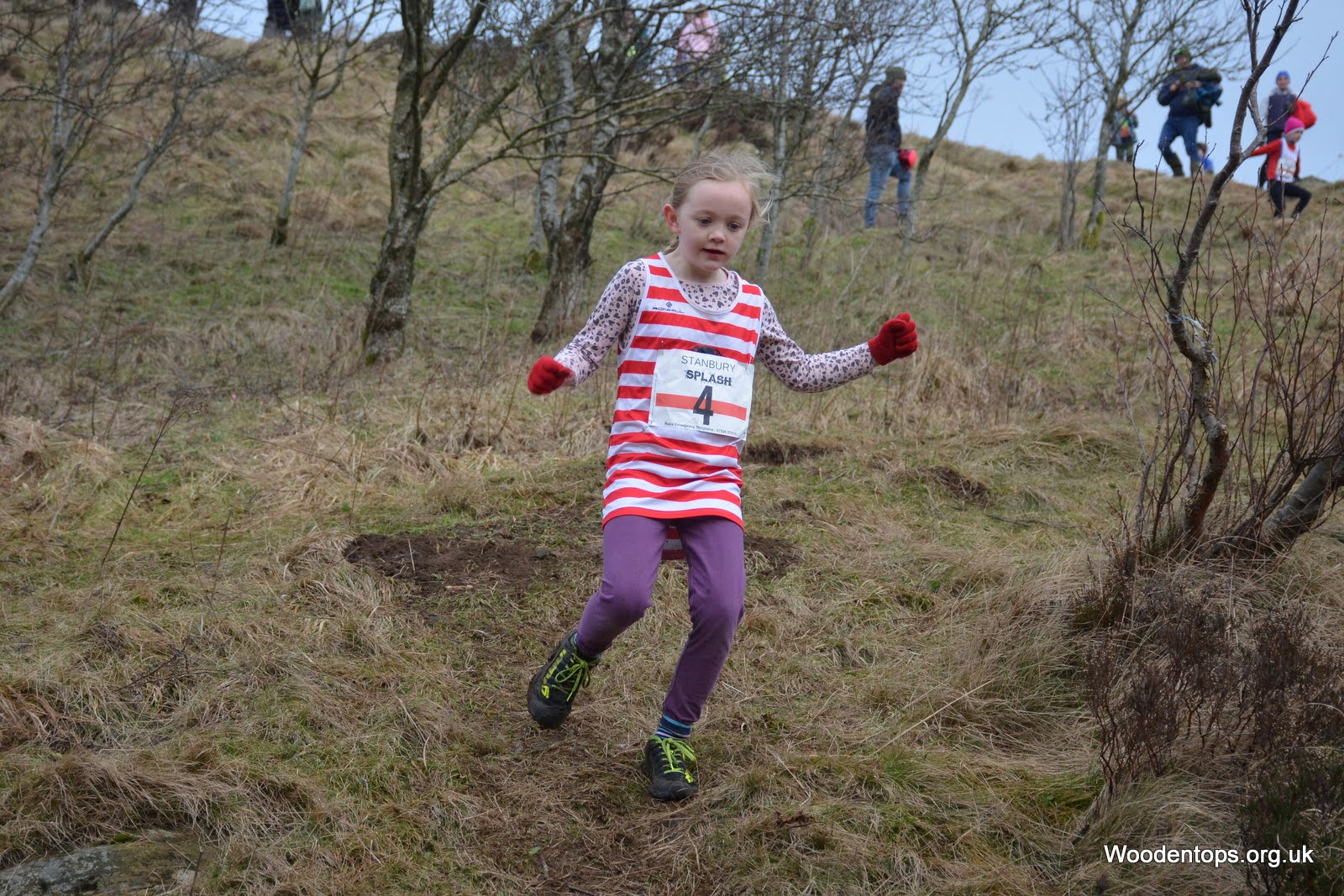 Rowan Cotterill (10) did really well despite running in the U13 category for the first time one of the youngest in the category. Holly Cotterill (7) ran in the U9 race and came 2nd girl, 4th overall. Only her second fell race but she loves the races. The chocolate prizes at the end help. She won a big bag of Celebrations and was told by the organisers at the prize giving that they were all for her, and shouldn’t share any with the parents! 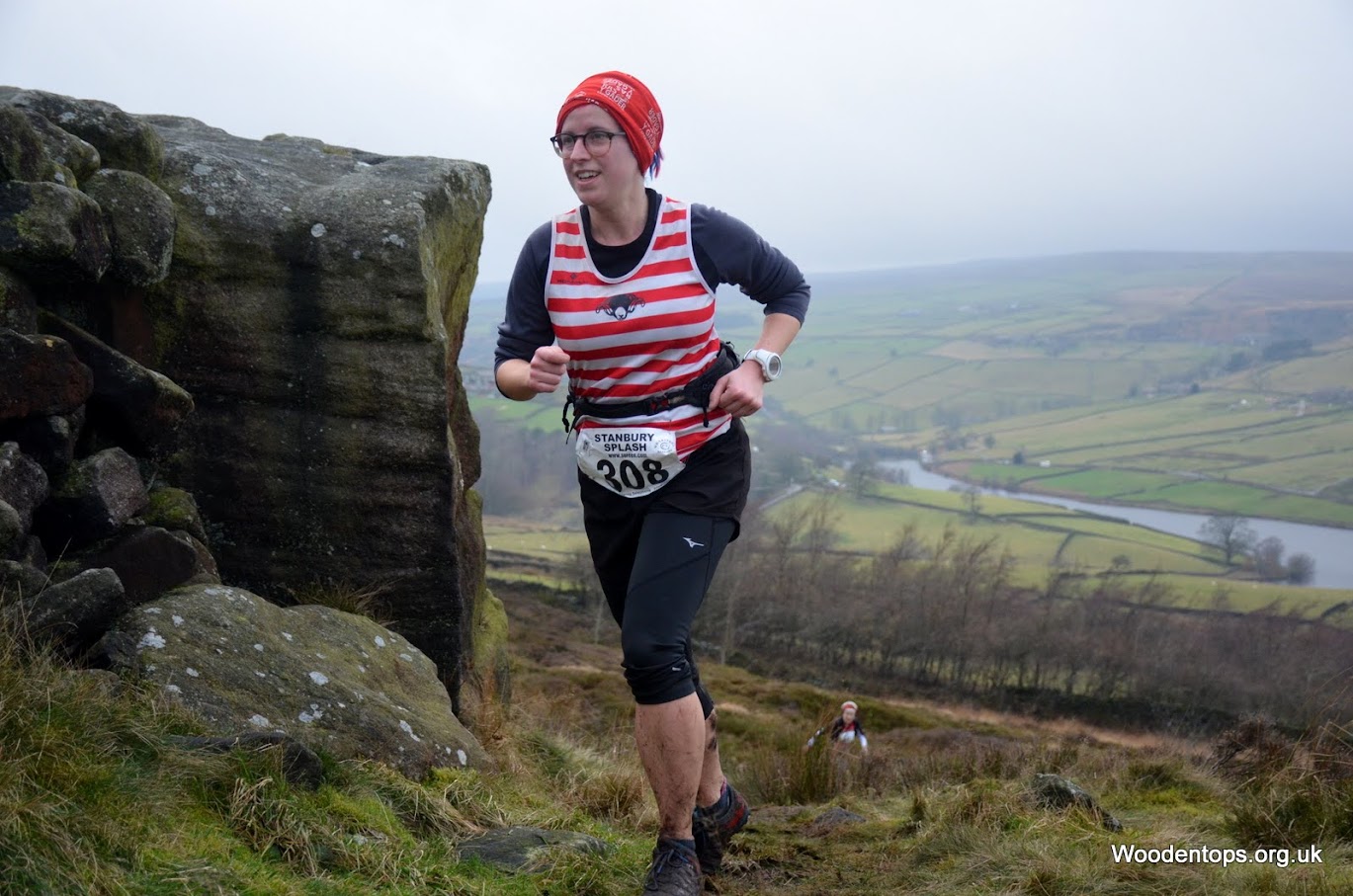 Charlotte first lady back for the club

305 Seniors ran the 7.5 mile race that ranges across the Bronte Moors and around Ponden Kirk with a double splash through South Dean Beck.  There was a slight alteration to the course this year near Upper Heights.  8 Calder Valley runners took part with Jon Smith getting 12th place in 53.01.  Charlotte Wetton was Calder’s first woman in 1:25:33

🇦🇹 123 🥳 at Hoofstones today with Captain

From splashing at Stanbury to keeping standing up

Its Tuesday which means its CVFR club night - and

BREAKING NEWS...Forget anything written on the bac