Rob leading Iain at Boulsworth in the fight for the title

It was another successful week for Calder Valley Fell runners with wins and awards in British and club Championships and for the juniors too.

Firstly to Boulsworth Hill fell race, where Rob Allen was able to seal this years club Championship with a strong win against his two closest rivals – Iain Illstone and Dougie Zinnis. Rob finished 12th overall in the race, which takes runners from Trawden Agricultural show on tracks over to the base of Ladd Law, where runners climb sharply up – almost to the trig – and then back down on sweeping, soft moorland, before returning along fast tracks to finish.

Said Rob “Swelled by over forty from Clayton-le-Moors the numbers of over two hundred runners for Boulsworth gave the organisers a few headaches, with late arrivals only having their race number written on the back of their hands in biro. Nine Calder Valley runners lined up; after a couple of recent, close, battles with Iain Illstone, I knew who my main rival was for club champs points. Aware of Iain’s descending prowess on technical terrain, my tactic was simple; keep with him on the fell section until the fast final mile on gravel track and put in a big effort to finish.

Dougie Zinis led out the Calder Valley pack to the bottom of the the main climb where Iain and I passed him. True to form, after hitting the high point of Saucer Stones together, Iain opened up a gap coming off Little Chair Stones. I managed to reel him in before the start of the track where my recce paid off; I had enough left in the tank for the frenetic run in. A lung busting sprint with Chris Snell of Clayton-le-Moors saw a dead heat for twelfth place, and a hundred points in the bag. A satisfying conclusion to the club champs for myself, and a cracking day out in the sun for all.”
The battle now remains for second place …. 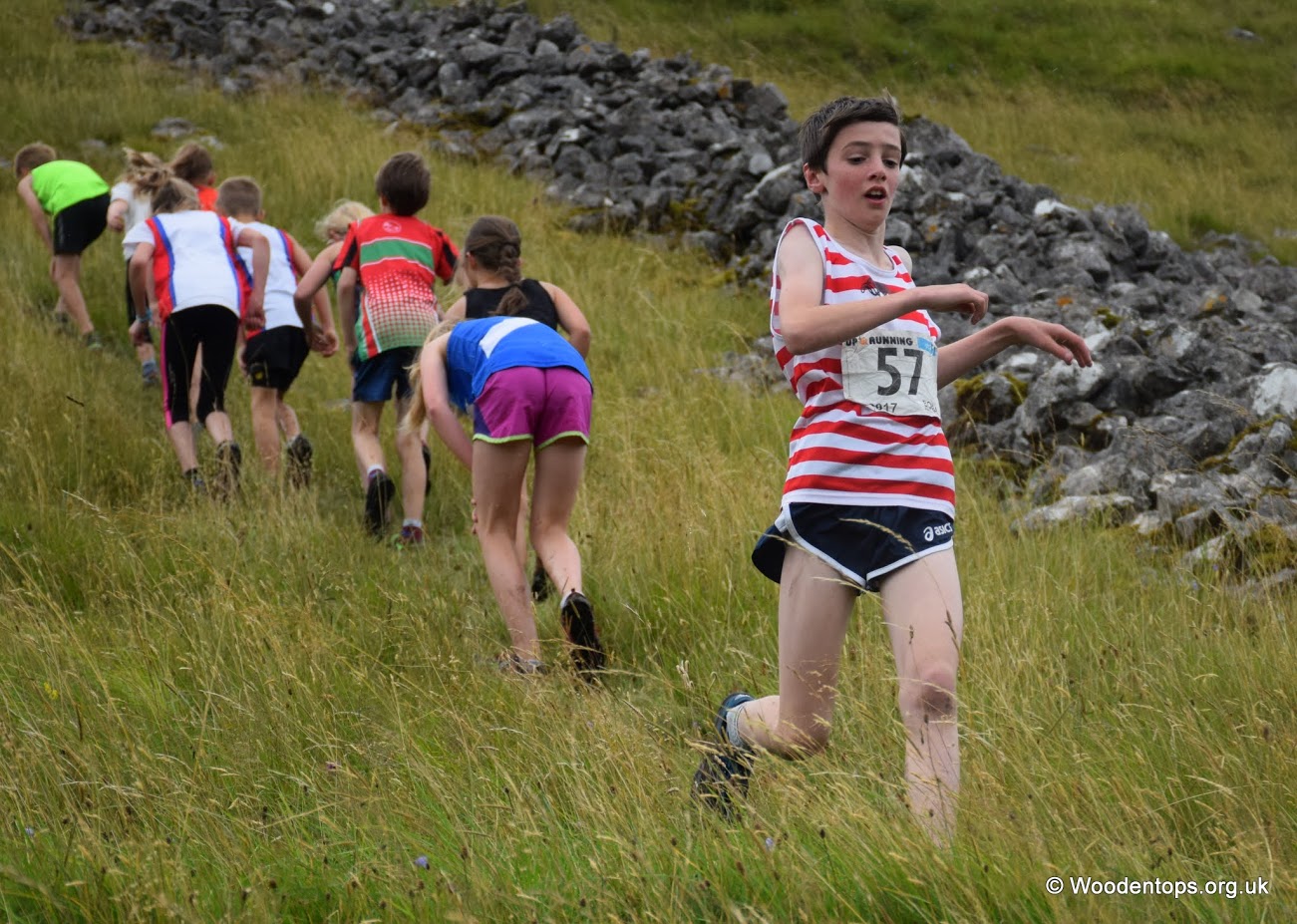 Will descending to take the title

Next, over to Arncliffe Gala for another installment of the BOFRA Championship series – the seniors race containing 459 ft of climbing in 1.9 miles. William Hall claimed another title by taking the BOFRA under 12s prize with yet another win at Arncliffe. Will has been 1st at all his races in the BOFRA series and is a massive talent – one to definitely watch out for. He took the title from Dexta Thompson of Blackburn Harriers.

Finally on Sunday there was Maesgwyn Muddle, the final counter in the British Championship series, which took place in Llanberis in North Wales. The race was approximately 10 miles and included 3,700 ft of ascent.  The weather was poor and very claggy, so there was very limited visibility on most of the course. Calder Valley v40 team needed to get a team round this race strongly to try and get into the national medals again.

Said Shaun Godsman “The race started fast along 2 miles of undulating track, after which you hit what felt like a mile of vertical climb followed by a steep fast descent back into the valley where you then start to climb and descend several times over welsh peaks taking in the famous Moel Eilio. After the final descent out of the mist there is a short climb and long run in to an uphill finish.

Gav and myself were able to push on in terms of our team; however, Gav ran off into the mist on his own race route (not the official route) and got lost for a while – long enough for me to claim the club lead. It finished myself in 19th overall and 4th v40, then Matty Roberts, Gav, Mark Taylor, Stephen Edwards, then Mark Wharton as team back up.”

This result gave Calder the overall v40 team win and 3rd open team. As a result, Calder v40s leap frogged Dark Peak and Todmorden Harriers in the medal table into an overall silver medal position after a hard year racing.